Accessibility links
From Dinner Parties To Spy Rings, 'The Woman Who Smashed Codes' Bursts With Detail Jason Fagone's biography of pioneering code-breaker Elizebeth Friedman — who, with her husband William, helped catch both smugglers and Nazis — is the story of a fascinating woman in perilous times.

From Dinner Parties To Spy Rings, 'The Woman Who Smashed Codes' Bursts With Detail

From Dinner Parties To Spy Rings, 'The Woman Who Smashed Codes' Bursts With Detail 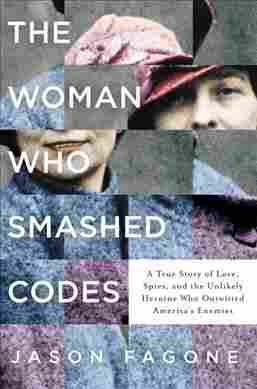 The Woman Who Smashed Codes

A True Story of Love, Spies, and the Unlikely Heroine Who Outwitted America's Enemies

"No code is ever completely solved, you know."

It's quite a time to be reading The Woman Who Smashed Codes. Subtitled The True Story of Love, Spies, and the Unlikely Heroine Who Outwitted America's Enemies, Jason Fagone's book delivers on that promise, bringing one woman's deliberately erased accomplishments back into the limelight. But it also resounds with warning bells that should sound farther away than they prove today.

There's really no way to write about Elizebeth Friedman without making it a thriller; like many great people caught up in great events, there's a sense of serendipity in retrospect. A last-minute trip she makes to a Chicago library becomes a job with George Fabyan (the kind of Gilded Age oligarch who kept bears on his property). She aids Elizebeth Wells Gallup in Gallup's quest to prove Francis Bacon hid coded messages in the Shakespeare plays she contends he wrote. By the time Elizebeth and future husband William Friedman are decoding messages for the government at the start of World War I, her life seems almost incredible. And that's before Fagone gets to the ciphers themselves.

Government outsiders called them magic, and though Fagone dutifully details cryptology concepts and ciphers, you'd be forgiven for suspecting something supernatural in the Friedmans' abilities. Starting out side-by-side on a tycoon's landscaped estate, they became the founders of modern codebreaking. (After Fagone establishes their methods, the codebreaking moves so briskly it really begins to seem uncanny: A coded message crosses Elizebeth's desk — "Certain letters repeated vertically" — a page later, she's solved the first Enigma.) Fagone's assiduous style reflects Elizebeth's inexhaustible pragmatism. She spent most of her career in the Coast Guard, catching smugglers and, later, Nazis, but her quoted remembrances are workaday: "You did what you could with what you had to do it with."

After Elizebeth's surreal beginnings, Fagone keeps the focus largely on her work, and on a marriage strained by government pressure — a codebreaking team forbidden to talk to each other about what they were doing. "A competent codebreaker was suddenly a person of the highest military value," Fagone writes. Their skill made them threats; they were treated accordingly, and this intelligence-gathering operation begins to feel more John Le Carré than James Bond.

Museum Finds Piece Of WWII History For Sale On EBay

Fagone gives us an impression of war as a bureaucracy (among other things, the FBI routinely took credit for her work), and though his fondness for his subjects is clear, he's careful to frame their biography within dozens of overlapping stories — they're holding down a moment in time. One of William's colleagues during the rise of Hitler was a Civil War veteran. Elizebeth frantically decoded messages from South America in a race to prevent Nazi domination of the continent, while William decoded Japan's Purple cipher machine. Throughout the book, Fagone presents the American government as posing as great a threat as any foreign foe; in his sketch of Washington, the military is overeager, J. Edgar Hoover is a ghoul, and the Signal Intelligence Service and similar surveillance organizations are seeds planted in good faith that grew beyond William's conscience.

The shadow of that uncertainty hangs over even the most celebratory moments. Elizebeth and William seemed determined, by necessity, to remain circumspect about consequences of their work — they had much knowledge, and no power. But the book offers asides about the cost of intelligence in wartime, or leaps into the future to draw conclusions from their concerns. The Friedmans are undoubtedly heroes; they also helped build a surveillance state whose power is only as good as the morals of those in charge, which is a tension not easily resolved.

In the end, this might be what The Woman Who Smashed Codes is really about: a study of the sort of extraordinary events that consume the world, and the abilities — and limits — of a few extraordinary people. Bursting with details in everything from dinner parties to spy rings, Fagone's book offers the story of a fascinating woman in perilous times, and asks some uneasy questions about the present. The Woman Who Smashed Codes may be the quietest government operation ever told; Elizebeth would probably like it that way.