Accessibility links
Football And Donald Trump: It's A Long Story As President Trump opines about what NFL players and owners should do regarding politics and protest, it's worth revisiting a 2009 documentary about his history with professional football. 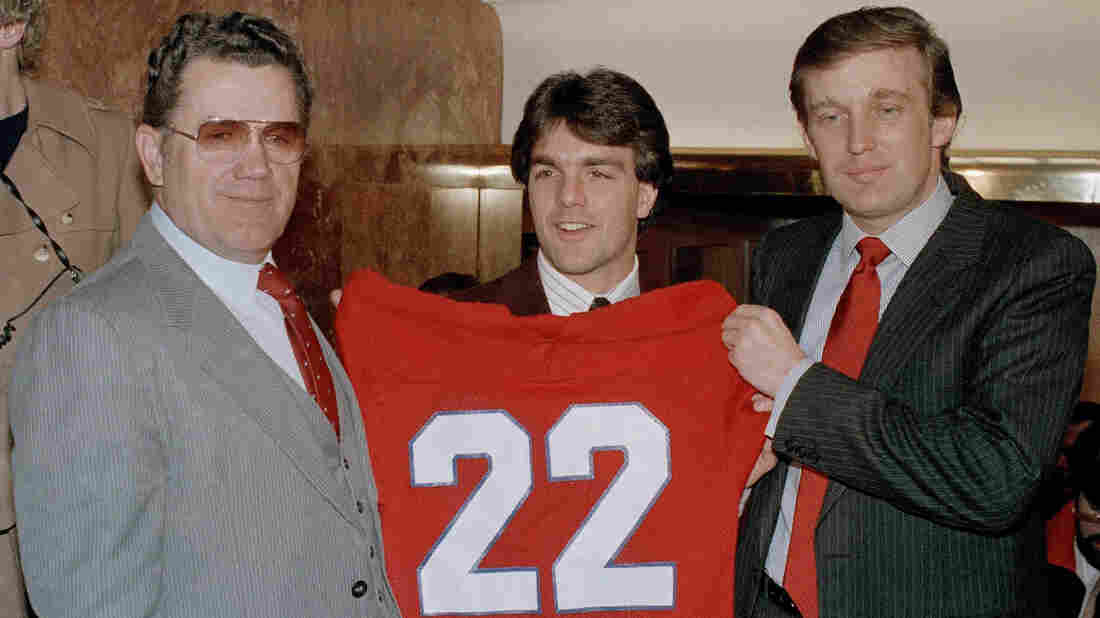 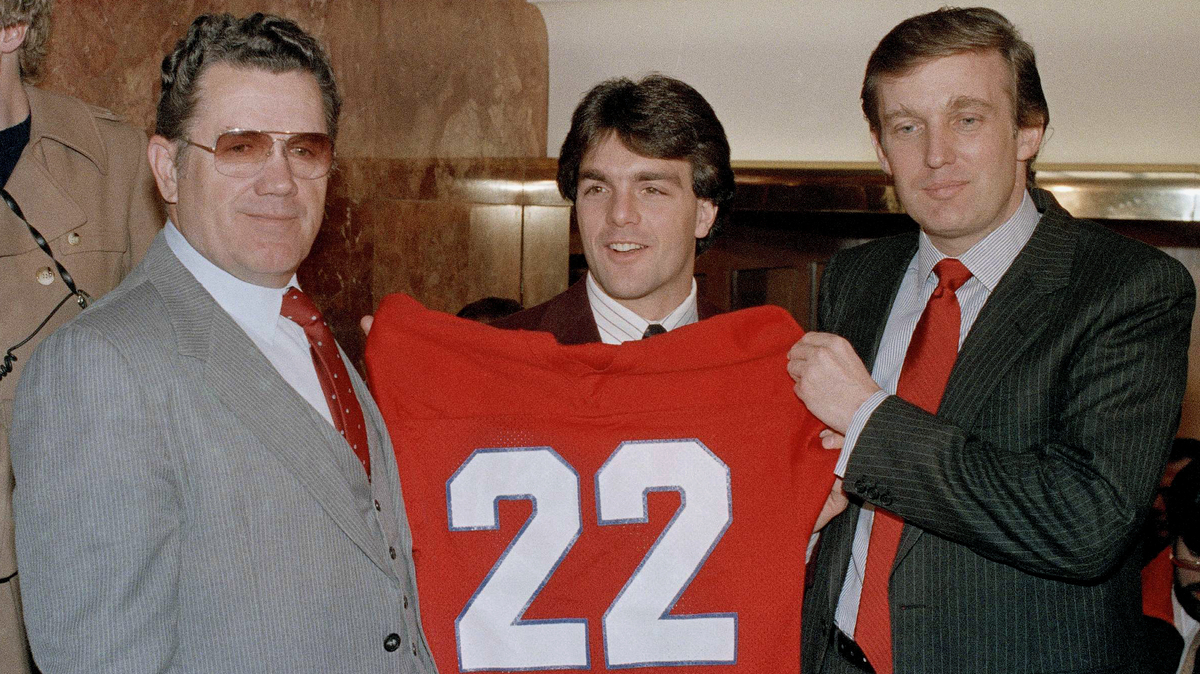 "I hope he remains loyal. And if he doesn't, let me know, and I'll attack him."

Those are the words of (now) President Trump, but they're not from any current controversy. They're from 2009, from an interview in the ESPN documentary Small Potatoes: Who Killed The USFL?, which aired that same year. Trump is talking about Charley Steiner, the longtime ESPN sportscaster who's now the play-by-play radio announcer for the Los Angeles Dodgers. In the 1980s, Steiner was the announcer for the New Jersey Generals, the football team Trump had bought that was part of the upstart USFL, a professional football league that lasted three seasons playing in the spring instead of, like the NFL, in the fall.

The words come shortly after filmmaker Mike Tollin tells Trump something that Steiner said regarding his purchase of the Generals in 1983, in the league's second year: "[Trump] figured that he could buy his way onto the back page of the New York Post, he could move to Page Six, the gossip page, and then ultimately, the front page. Donald Trump was no longer a Donald, but the Donald."

As you know, the part about making it to the front page eventually came true, though Steiner probably wouldn't have predicted how.

Small Potatoes, which is available to rent on streaming services, provides some interesting additional context — along with his flirtation with buying the Buffalo Bills shortly before his 2016 presidential campaign began — for Trump's recent condemnation of NFL players who kneel during the national anthem to protest police brutality and racial inequality. Trump has gone so far as to proclaim via Twitter that owners should prohibit these protests and should fire anyone who engages in them. It's worth remembering that his history with the NFL is long. (So, in fact, is his history with ESPN, which made this documentary he greatly disliked, and with whom he also got into it recently over ESPN commentator Jemele Hill calling him a white supremacist.)

Tollin's thesis in Small Potatoes — which later earned him a public feud over the film with Trump that did take place on Page Six — is that the USFL was killed by Trump's stubborn insistence on the doomed idea of moving USFL football to the fall to compete directly with the NFL. Players interviewed for the film, including stars like Jim Kelly and Steve Young, say they had a feeling the push to the fall was a bad idea. The USFL was small but growing. Why throw yourself against the incredibly powerful NFL? But Trump didn't want to coexist as a smaller league and wait to see what happened. He went after a bigger prize.

Trump became the public face of a lawsuit against the NFL by the USFL in 1986, arguing that the NFL constituted a monopoly that, among other things, prevented the USFL from getting fall television contracts. Ultimately, the jury believed that the monopoly existed, but not that the USFL had been damaged by it in the way it claimed. It awarded the USFL $3. One possible explanation for the lack of damages? The NFL had argued that the USFL had planned not to actually play separately in the fall, but to force the NFL to merge with it and adopt at least some of its teams. That could mean the USFL wasn't really harmed by not getting TV contracts it never intended to get.

The verdict was for $3 plus interest, actually — a check for $3.76 that Tollin has on hand and gives to Trump during the prickly 2009 interview. The tiny verdict — the arguably empty victory — quickly led to the USFL folding altogether.

Because political lenses can be so disorienting, it can be worthwhile to look back at documents from before politics really dominated a person's image. Here, Tollin makes an argument in 2009 that Trump was impatient and overeager for a confrontation with the NFL. And no less a figure of the 1980s than Burt Reynolds, who was also involved with the league, says in an interview that Trump's "dream was to be in the National Football League. And they didn't want him."

That's not the way Trump sees the story or his interest in the league, and he's steadfast in his arguments to Tollin that he was right, that spring football was never going to be a success. What would have happened if the league had stayed in the spring and tried to grow gradually is speculation, for both men.

At the end of the 2009 interview with Tollin, while taking off his microphone, Trump asks Tollin whether he agrees or disagrees with Trump's thinking about what the league should have done. Tollin suggests that he thinks the league could have carried on for a while playing in the spring, had it continued as it was. "It would have been small potatoes," Trump says, patting Tollin on the shoulder. "Have a good time."

The documentary "Small Potatoes: Who Killed the USFL?" can be found as an episode within Volume 1 of ESPN's series 30 For 30, which is available to rent on platforms including iTunes, Amazon and Google Play.