Accessibility links
The Rise Of The Slime Economy Making and playing with slime has gone from a fun activity to a moneymaking endeavor for many online. Sales of Elmer's, a key slime ingredient, jumped and stores have seen shortages of the glue.

The Rise Of The Slime Economy

The Rise Of The Slime Economy 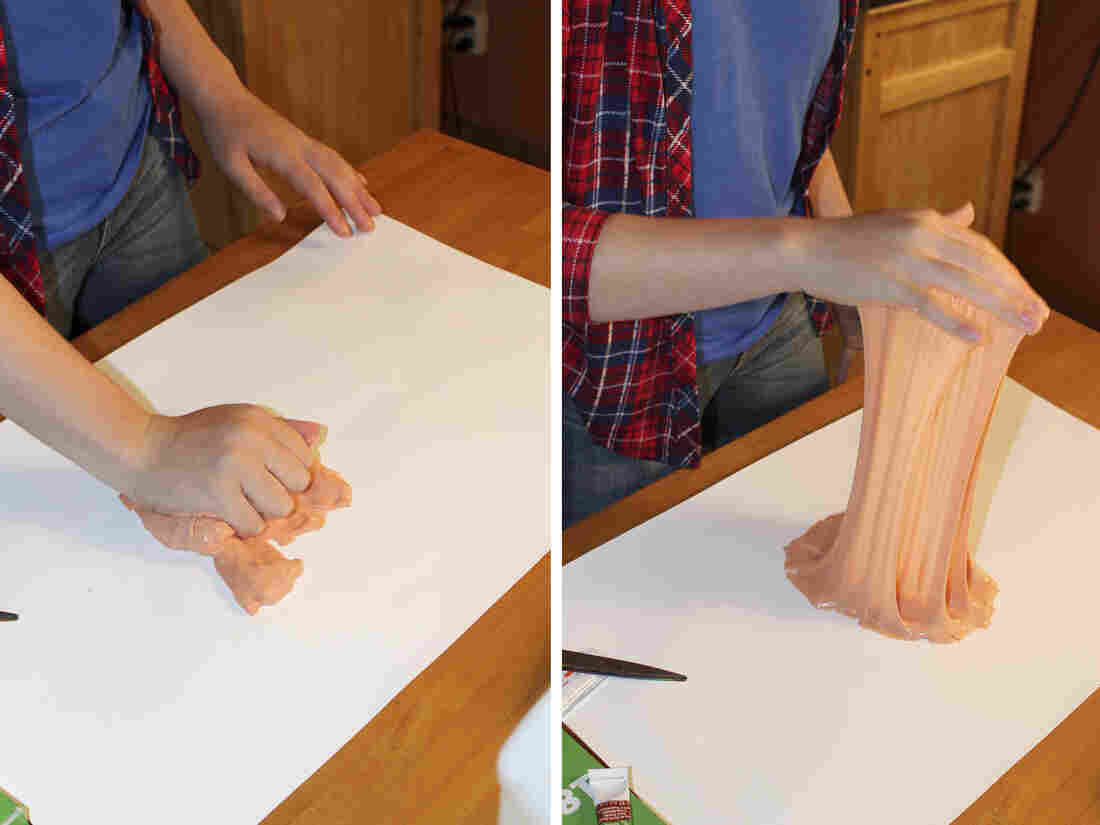 In this combination photo, Astrid Rubens demonstrates the elasticity of homemade slime in her kitchen in St. Paul, Minn., in June. Jeff Baenen/AP hide caption 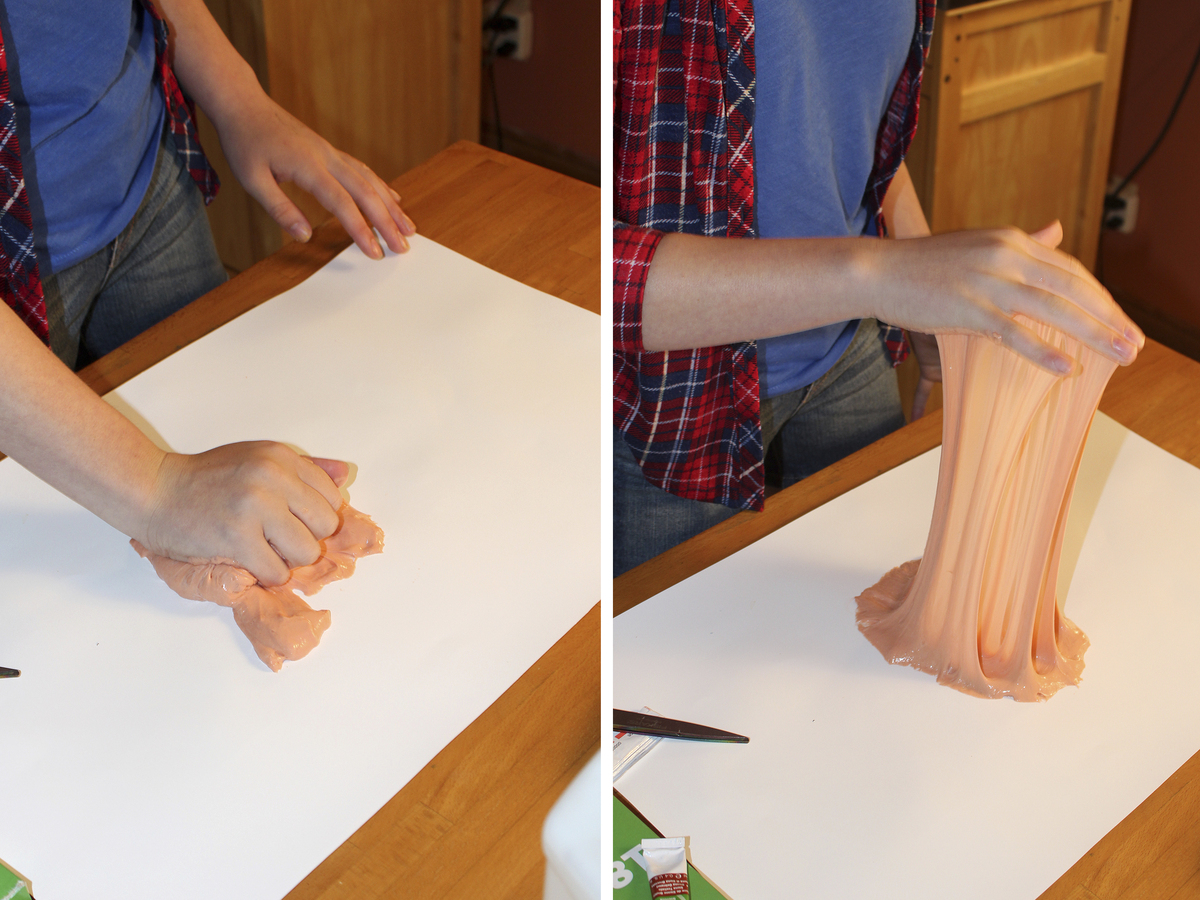 In this combination photo, Astrid Rubens demonstrates the elasticity of homemade slime in her kitchen in St. Paul, Minn., in June.

It has become a social media sensation and even led to a run on glue sales. We're talking slime — and not the green liquid Nickelodeon famously dumps on celebrities. And for many young people on YouTube, Instagram and Etsy, it's a moneymaker.

Of the more than 5 million posts on Instagram tagged with #slime, most depict brightly colored stuff filled with glitter and pigments of all kinds. So the slime of today is far more viscous and elaborate than that green liquid on Nickelodeon. Slime has become so popular that the American Chemical Society recently published a fact sheet about it including a detailed scientific explanation for how the magic happens.

This gooey DIY toy is taking the Internet by storm, mostly in the form of Instagram videos showing only a set of hands squishing and stretching various types of slime.

Slime is also popular among YouTubers. In June, The New York Times did a profile on Karina Garcia, one of a handful of influencers considered to have started the trend. Known as the "slime queen," Garcia has just over 6 million subscribers and makes as much as $200,000 a month from sponsorships on her various slime recipe videos.

Garcia's is just one of hundreds of YouTube and Instagram accounts that have capitalized on the growing slime trend.

Many young slime lovers are also selling their slime online, on platforms like Etsy. These entrepreneurs, often as young as 10 or 11, are making thousands of dollars each month to put toward college or invest back into their slime business.

The owner of the Instagram page "slime.jewel", an account with over 500,000 followers, says that when she started making videos last year she never imagined she would be making money off slime. "It was initially driven by passion to create," says slime.jewel, who declined to give her real name. But when profits started rolling in she began investing in scents and glitters, which only increased her profits further.

Searches for slime on Etsy have soared since last October, the Times reported, citing the company. The popular and often viral Instagram slime videos serve as marketing for individually owned slime businesses. Most slime batches sell for between $5 and $10, but range up to $25 for the largest batches. Thousands of Etsy shops sell slimes ranging from "Fruit Salad Clear Slime" to "Strawberry Champagne Metallic Slime." These slimes are often brightly colored, and are filled with creative add-ins like Styrofoam balls and plastic beads that give slimes different textures and different sounds when played with. 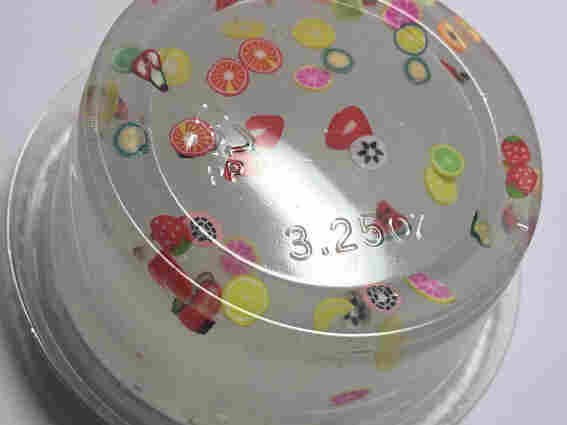 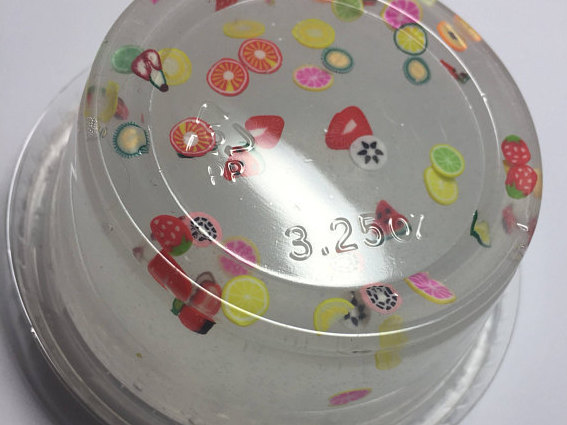 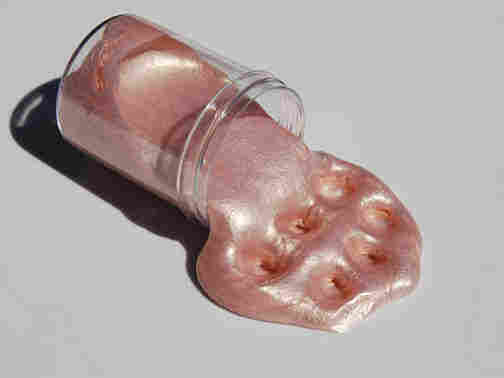 The crackling, popping, and squishing noises associated with slime videos have earned slime a spot on the short list of another growing Internet trend, popular among adults. Along with whispering, scratching and tapping noises, and clips of Bob Ross (famous for his TV show The Joy Of Painting), slime videos have been identified as a common trigger of ASMR, or Autonomous Sensory Meridian Response.

ASMR, a term coined in 2010 on a Facebook group, refers to a sensation defined as "a combination of positive feelings, relaxation and a distinct, static-like tingling sensation on the skin," according to one of a very few peer-reviewed studies on ASMR. The same study found that, although not all people experience ASMR, of those participants who did, 98 percent agreed that they used ASMR largely as an opportunity for relaxation. "I can only describe what I started feeling as an extremely relaxed trance like state, that I didn't want to end," one study participant said.

Emma Barratt, one of the authors of that ASMR study, confirms that slime videos fit well into the list of ASMR triggers. "Something about the predictable way in which these materials are moving or being manipulated can bring about the same sort of flow-like feeling created by ASMR videos," she says. Barratt says the rise of the use of slime videos for ASMR "might be a useful avenue in helping us further untangle just what stimuli are needed to have an effective ASMR trigger."

The growing popularity of the slime trend has created glue shortages in many craft stores around the country as kids and adults alike buy up bottles in bulk.

Oh no. We recommend trying online retailers until your stores are able to restock: https://t.co/S2mmNct0I7

Elmer's said it experienced a 50 percent jump in sales in December as a direct result of the slime trend. Subsequently, Elmer's has been capitalizing on the slime trend, launching a new television commercial featuring "kid-friendly" recipes to make slime.

This "kid-friendly" aspect comes in the wake of concerns over the safety of slime. The most basic slime recipe consists of a PVA based glue (for most consumers that is Elmer's), water and borax. A traditional slime recipe calls for the borax to be safely diluted in water, but when this laundry additive is touched directly it can lead to painful chemical burns. Although few kids have actually been hurt by the slime-making process, Elmer's chooses only to post borax-free slime recipes, featuring alternatives like baking soda and contact lens solution.

Elmer's has had a team of researchers and chemists focused on fueling the slime craze since it picked up major traction in the beginning of 2017, says Caitlin Watkins, a public relations manager at Newell Brands, which owns Elmer's. "At this point, everyone who touches the business has made slime," she says. "R&D experts have made it, marketing folks have made it, legal teams — even our CEO has made slime."

According to Google Trends, searches for the word "slime" peaked at the beginning of August, but the general upward trend for the past year implies that the slime craze is far from over.

Ema Sagner is the NPR Treasury and Risk Management intern.