Accessibility links
8-Year-Old Puerto Rican To Trump: 'Stop Tweeting And Come Help The People' President Trump is scheduled to visit the U.S. territory on Tuesday. Many there are without food, water and gas shortages following Hurricane Maria — a situation Trump has tweeted about frequently. 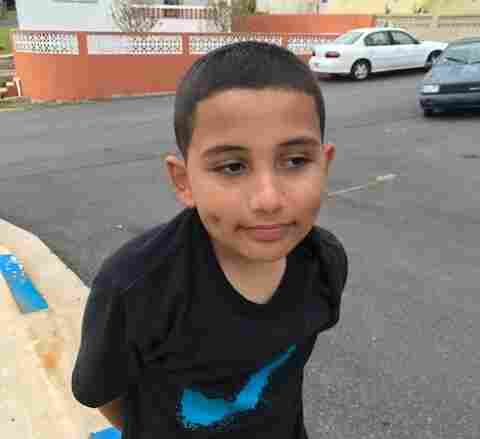 Yan Anthony Hernandez says he's excited for President Trump to come to Puerto Rico to see for himself the damage from Hurricane Maria left on the island, but he'd also like the president to "stop tweeting." Mandalit Del Barco/NPR hide caption

Eight-year-old Yan Anthony Hernandez has deep dimples on each side of his smile. Somehow, he managed to sleep through the hurricane that roared over his home in Isabela, Puerto Rico. Unlike those living in wooden houses, his cement home held up.

But now, there's no electricity or cellphone service, and his school is closed. Instead of spending his free time on his Playstation or watching YouTube videos as he usually does, he's a little bored.

His older sister Lorainne Goytya, a 20-year-old college student studying biology, says she misses being able to post photos to Instagram, send Snapchats or text her friends. But she says entertaining themselves is the least of their worries.

She says it's difficult not having a way to communicate with anyone beyond shouting distance. It took her nine days to find a rotary phone to call her father in Massachusetts.

"My dad told me that the images they were showing in the news out there, they were shocking, devastating, you think no one is alive," she says.

Apparently, her older brother, who is in the Army and based in Texas, had posted a photo of her saying she was missing. So when she finally got to speak to her father, "He was crying."

Goytya says she worries about him, and hopes to fly off the island to visit him as soon as she can.

Meanwhile, she's working the overnight shift in a shelter at the local Boys & Girls Club, where her mother and stepfather are volunteering too. Yan says they feel safer sleeping there than staying home alone at night in the dark; he worries someone could come and rob them.

Goytya says 10 people almost died when the diesel generator at the shelter ran out of gas temporarily.

"They were hooked up to oxygen or dialysis machines," she says. "And they almost didn't make it."

In Puerto Rico, Relying On Luck And Enough Gas To Get Medical Care

Yan says he's excited for President Trump to come to Puerto Rico on Tuesday to see for himself the damage from Hurricane Maria. He slaps his face with both hands, like Macaulay Culkin in Home Alone, and says "Wow! A so important person from the White House!"

And he has a message for President Trump:

"Stop sending tweets," he says, "and come help the people."

Lauren Migaki contributed to this report.