Accessibility links
On 'SNL,' Jay-Z Wears A Kaepernick Jersey And Alec Baldwin's Trump Is Back The 43rd season of NBC's Saturday Night Live kicked off, unsurprisingly, with Alec Baldwin's impression of the president. But its sharpest political moments lay elsewhere. 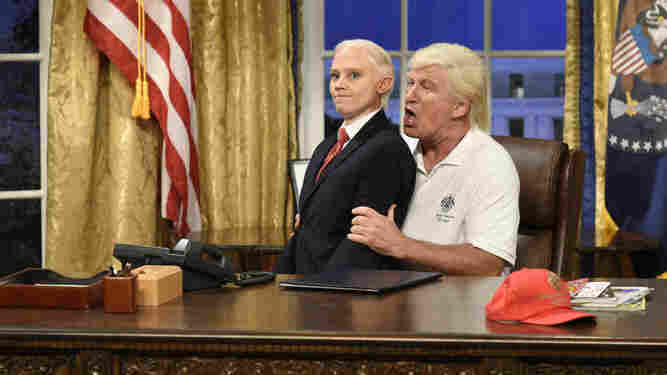 Kate McKinnon as Attorney General Jeff Sessions and Alec Baldwin as President Trump in the opening sketch of the 43rd season premiere of Saturday Night Live. Will Heath/NBC hide caption 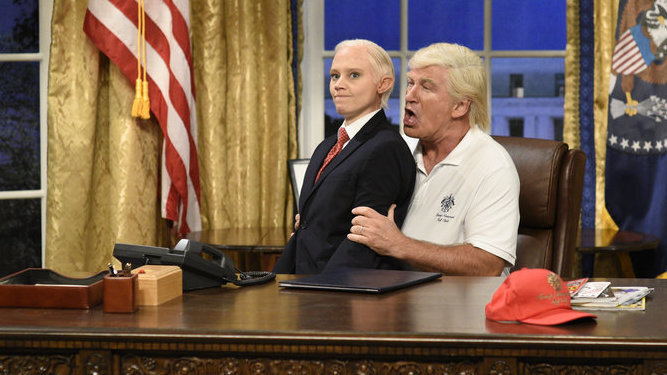 Kate McKinnon as Attorney General Jeff Sessions and Alec Baldwin as President Trump in the opening sketch of the 43rd season premiere of Saturday Night Live.

Alec Baldwin has made noises about stepping down as Saturday Night Live's President Trump, but Baldwin's version of Trump was right where you'd expect to see him in the show's 43rd season premiere, doing just what you'd expect him to do: he was behind the big desk, mishandling disaster relief. It wasn't an especially clever sketch until Kate McKinnon materialized behind the desk as an elfin Attorney General Jeff Sessions, plunking down on the president's knee and begging him not to tweet mean things.

But while the show's political sketches with their indelible impressions are what a lot of people remember as the show's political presence — Tina Fey as Sarah Palin, Phil Hartman as Ronald Reagan, Dana Carvey as George H.W. Bush — what spoke most directly to the political moment were other things entirely.

Jay-Z performed twice, and when he performed "Bam" (with Damian Marley, who is also featured on the track on the album 4:44), he wore a football jersey, suggesting no team, that said "COLIN K" on the back and carried Colin Kaepernick's "7" on the front. Jay-Z's choice to align himself with Kaepernick and his — and other players' — protests against police violence felt weighty in a way that Baldwin's face-pulling rarely does.

That's not to say that all the comedy parts of the show had no weight. During Weekend Update, co-anchor Michael Che spoke directly to the president, mocking his response to Puerto Rico, saying, "Write them a check with our money, you cheap cracker. In one month, you've mishandled Puerto Rico, DACA, the NFL — it's like whenever anybody darker than your golf pants has a problem, you're thinkin', 'How can I make this worse?'"

Che went on to address the matter of the flag as well: "It's hard to ask black people to respect the flag when we know that this country cares more about it than us."

Most of what felt most current wasn't Saturday Night Live's signature sketch material. Jay-Z was Jay-Z; the Che stuff could have been stand-up. But there is a thread that joins Kaepernick and Jay-Z and Michael Che here, which is that athletes and musicians and comics continue to demonstrate the fact that audiences are not entitled to expect there to be a kind of generic, apolitical blackness that separates itself from the real world. Or, as it was recently said on BuzzFeed, "Black Athletes Are Black People, And Black People Are Dying."