Accessibility links
Antonin Scalia's Less Well-Known Legacy: His Speeches Scalia Speaks is an anthology of the late justice's speeches on everything from the arts, turkey hunting, games and sports, faith and judging — and even the "Italian view of the Irish." 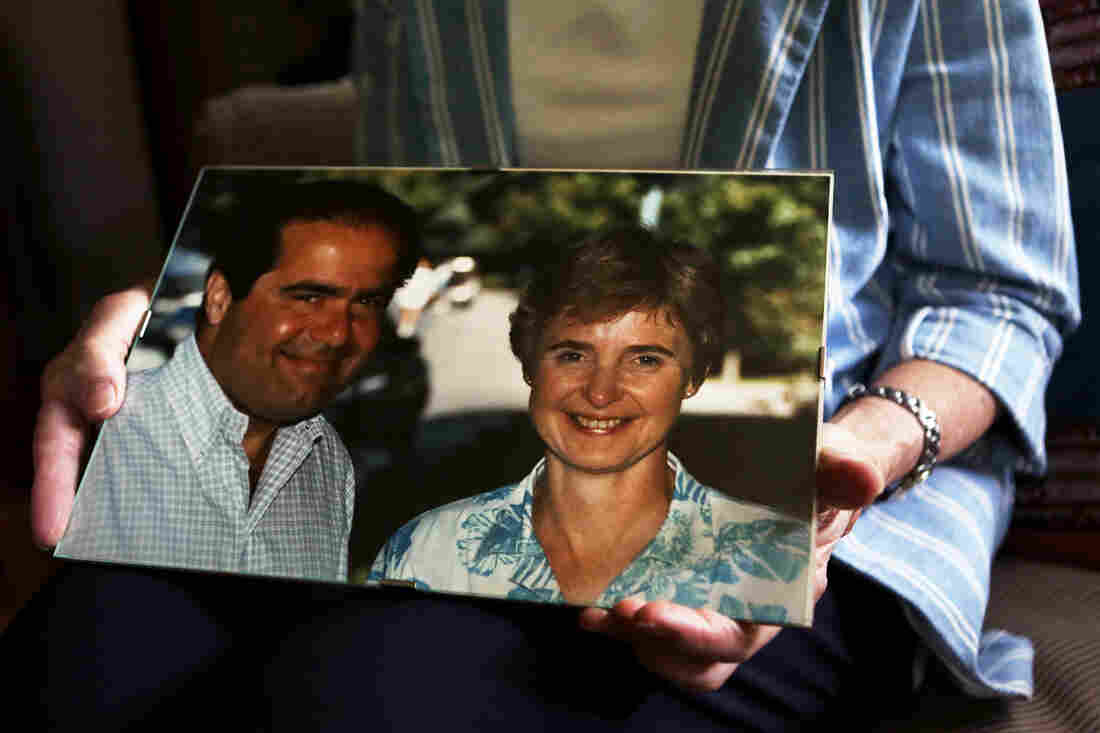 Maureen Scalia holds one of her favorite photos of her and her husband, the late Supreme Court Justice Antonin Scalia, in their home in Virginia. Jennifer Kerrigan/NPR hide caption 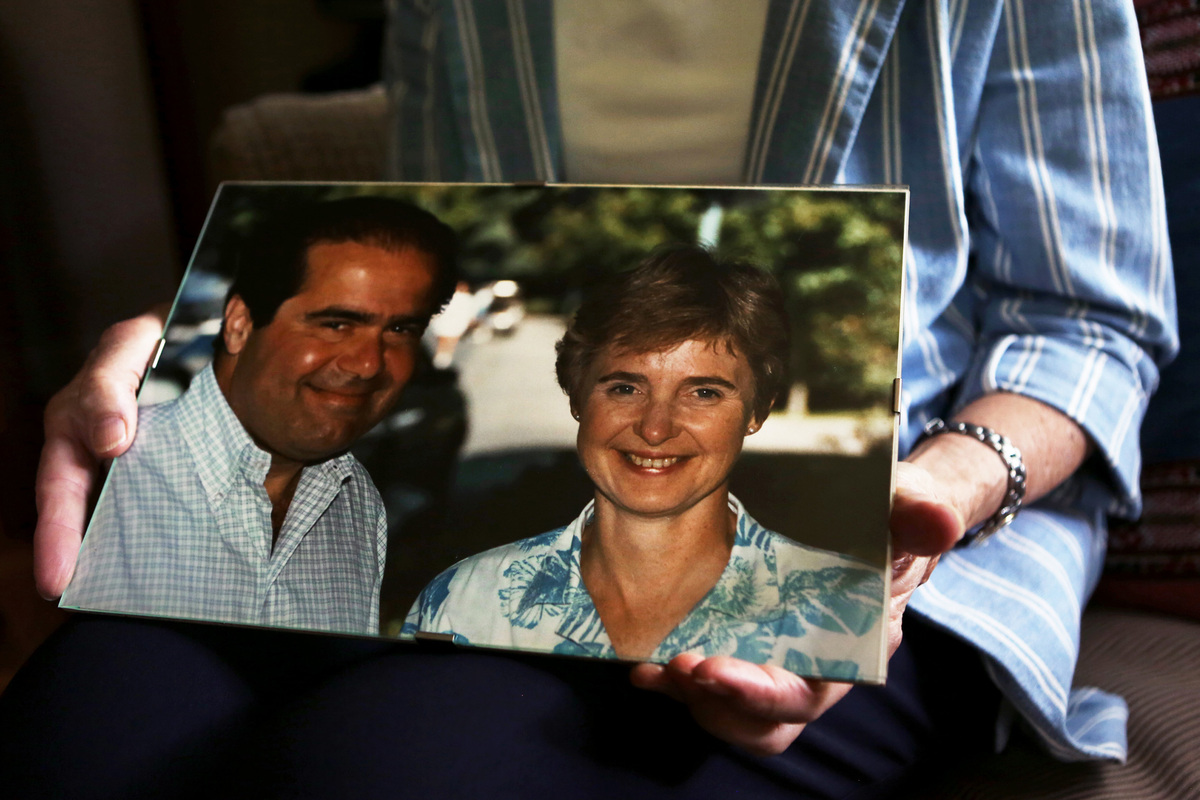 Maureen Scalia holds one of her favorite photos of her and her husband, the late Supreme Court Justice Antonin Scalia, in their home in Virginia.

In a sunny den in McLean, Va., Maureen and Christopher Scalia sit side-by-side on a comfy couch. He co-edited Scalia Speaks, an anthology of his father's speeches on a variety of subjects, and he ranks eighth in birth order out of the nine Scalia children. She is the mother of those nine children, and the widow of the late Supreme Court Justice Antonin Scalia — a conservative icon, bon vivant, music lover and witty observer of law and life.

Christopher explains that he put together the collection to give non-lawyers, as well as lawyers, a fuller picture of his father and his many interests.

The book's foreword is written by Scalia's close friend, Justice Ruth Bader Ginsburg, with whom he disagreed — often vehemently. As Ginsburg observes, her friendship with Scalia was "sometimes regarded as puzzling." The two opened up about being an "odd couple" during an interview I conducted at George Washington University in 2015.

As that appearance illustrated, Justice Scalia was a very theatrical presence, and, in most of the speeches in the book, those who knew him will quite literally hear his voice in their heads. 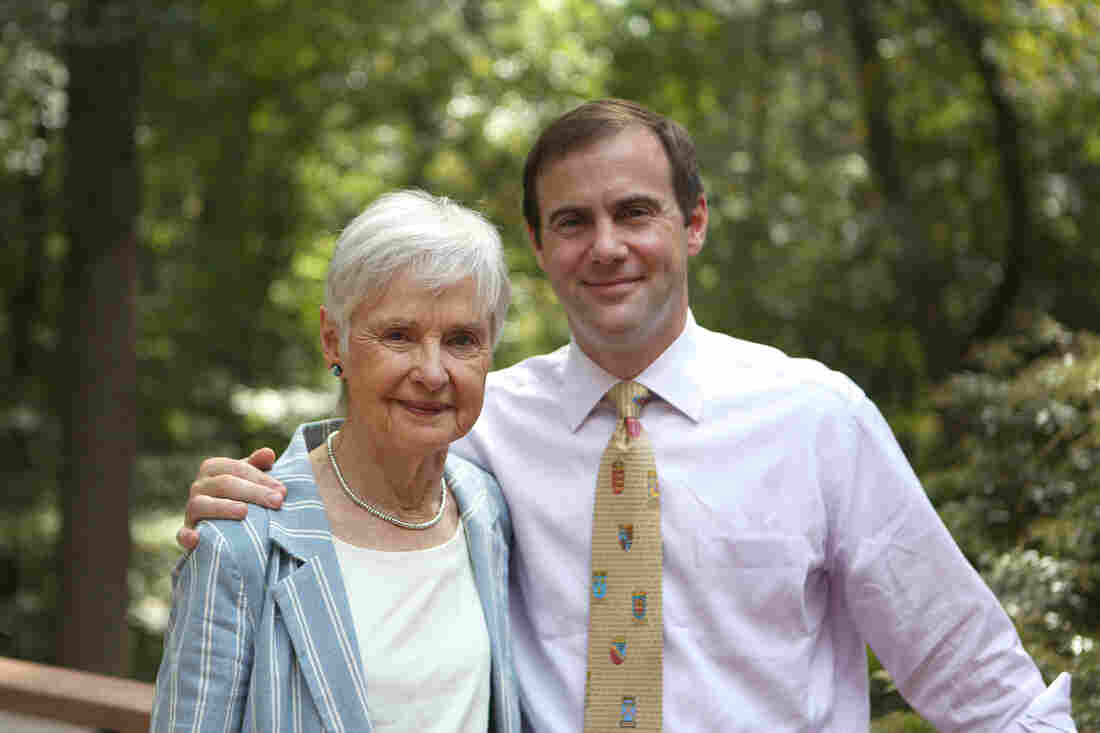 Maureen Scalia and her son Christopher stand on the back porch of the family's home in Virginia. Jennifer Kerrigan/NPR hide caption 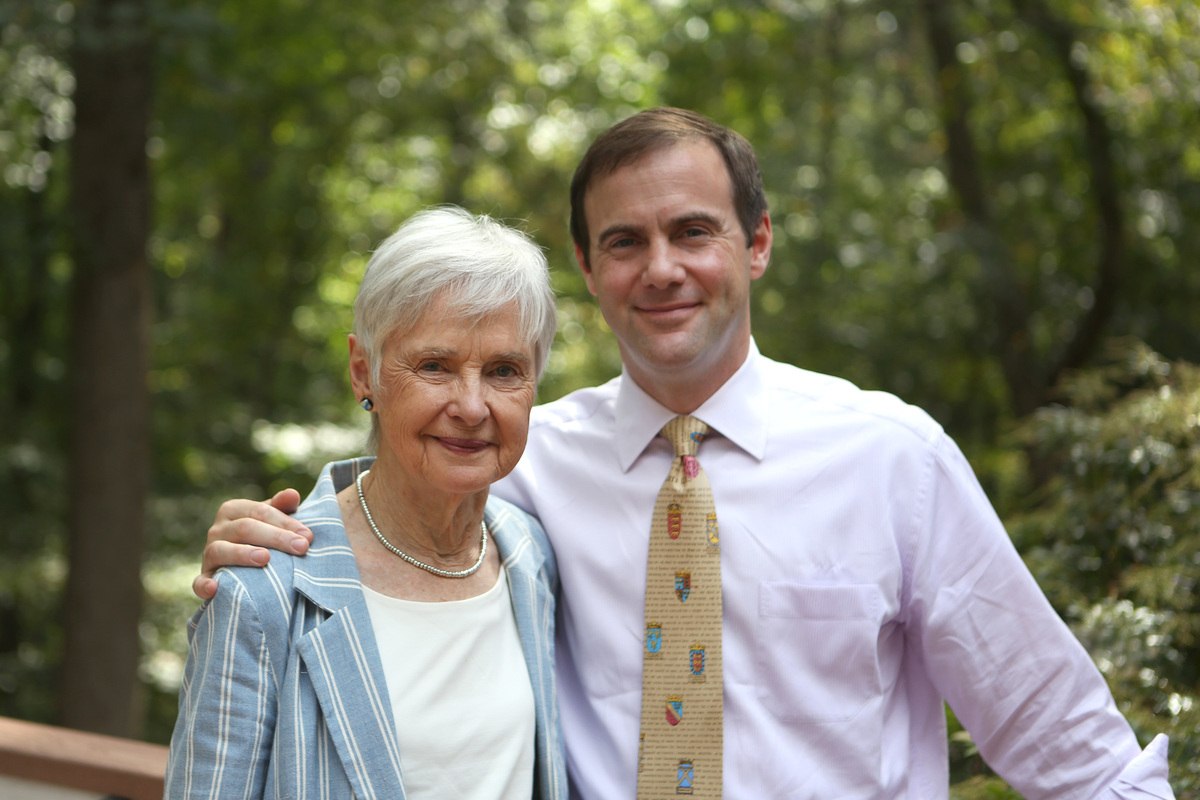 Maureen Scalia and her son Christopher stand on the back porch of the family's home in Virginia.

In a speech called Platitudes and Wisdom that Scalia performed many times, with adjustments for his audience, he was viciously funny in discussing the clichés of a commencement address. Among them, "follow your star" and "never compromise your principles."

Follow your star is fine, he said, if you want to head north and are following the North Star. "But if you want to head north and it's Mars, you had better follow somebody else's star." As for never compromise your principles, he opined, that's alright, "unless, of course, your principles are Adolf Hitler's. In which case you would be well advised to compromise them whenever you can."

One of my personal favorites in the collection is called, the Italian View of the Irish. It was delivered in 1988 at the Society of the Friendly Sons of St. Patrick in New York City. In one part of the speech Scalia describes the various characteristics of what he called "Homo hibernicus."

"One, of course, is lying," he declared, quickly adding, that "any other group would take offense at that, but I am sure that this gathering will proudly agree that nobody in the world can tell a glorious, toweringly false tale as well as an Irishman."

Asked if she thought that was true, Mrs. Scalia, born Maureen McCarthy, replies with a tiny smile: "Well I don't think it's lying....There's fun in spinning a story to see how far you could go."

Indeed, Maureen Scalia was fond of curing her husband's occasional grumpiness at the breakfast table by reading him items from the newspaper that she changed to make outrageous or just made up! 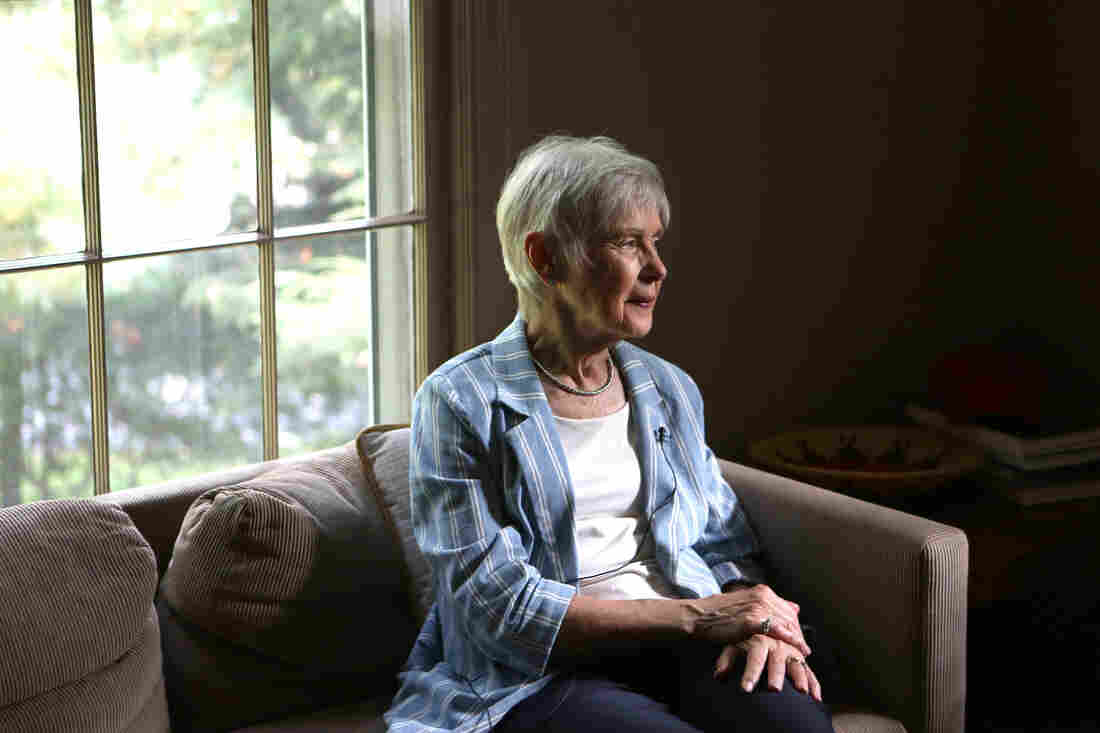 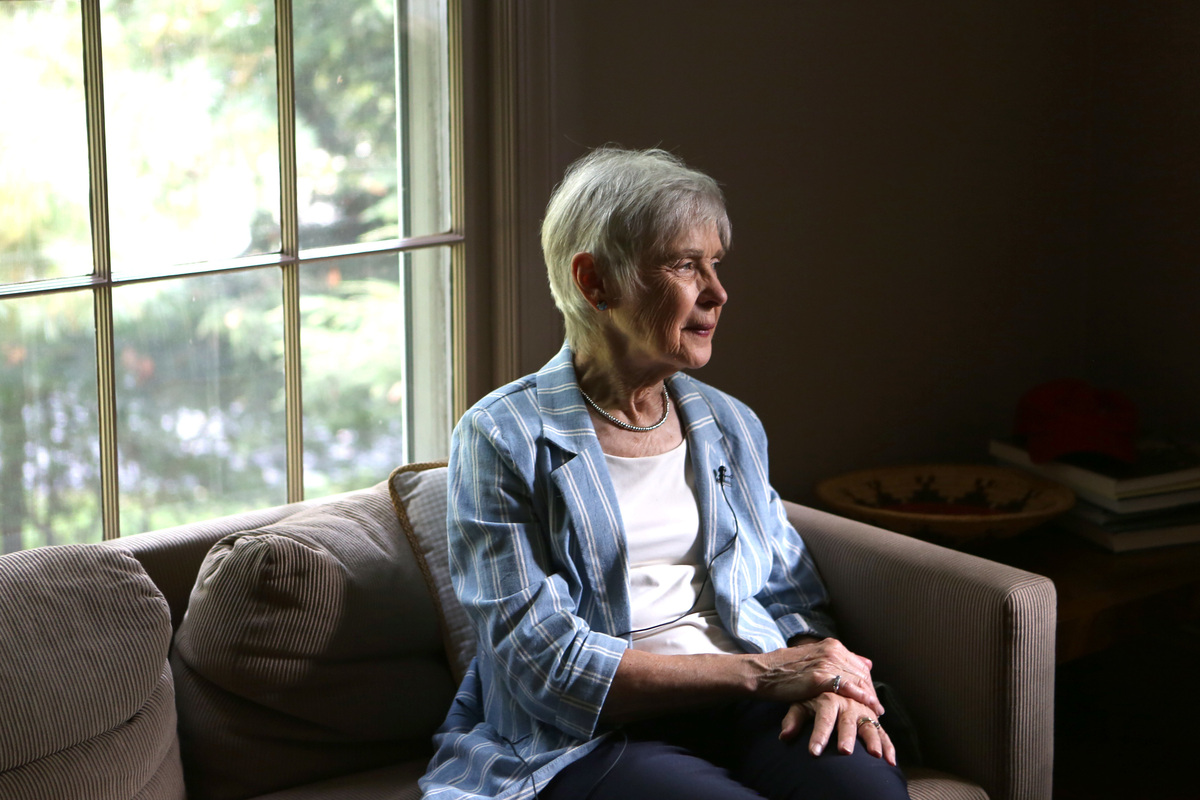 Turkey Hunting, another speech in the collection, is about Scalia's love of hunting not just turkeys, but everything from ducks to rabbits to boar. He went often on these expeditions, and so was able to provide Mrs. Scalia, noted as a "master of the art of...gourmet cooking" by Justice Ginsburg in her foreword, with a glut of fresh ingredients to work with.

Son Christopher remembers freezers in the garage to accommodate the "overabundance of meat" that his father brought home, so much that his mother "would never get around to cooking" it all. Luckily, Mrs. Scalia escaped the task of plucking the game that her husband brought home. "But I would always have to go through and see if there's any shot left," she says, "And there almost always was."

Among Christopher's favorite speeches is one called The Arts, delivered at The Julliard School in 2005. Appearing on a panel with historian David McCullough, opera singer Renee Fleming and composer Steven Sondheim, the justice opened this way: "Today's program reads like some sort of weird IQ test: Which of the following is out of place? Diva, author, composer, lawyer?" 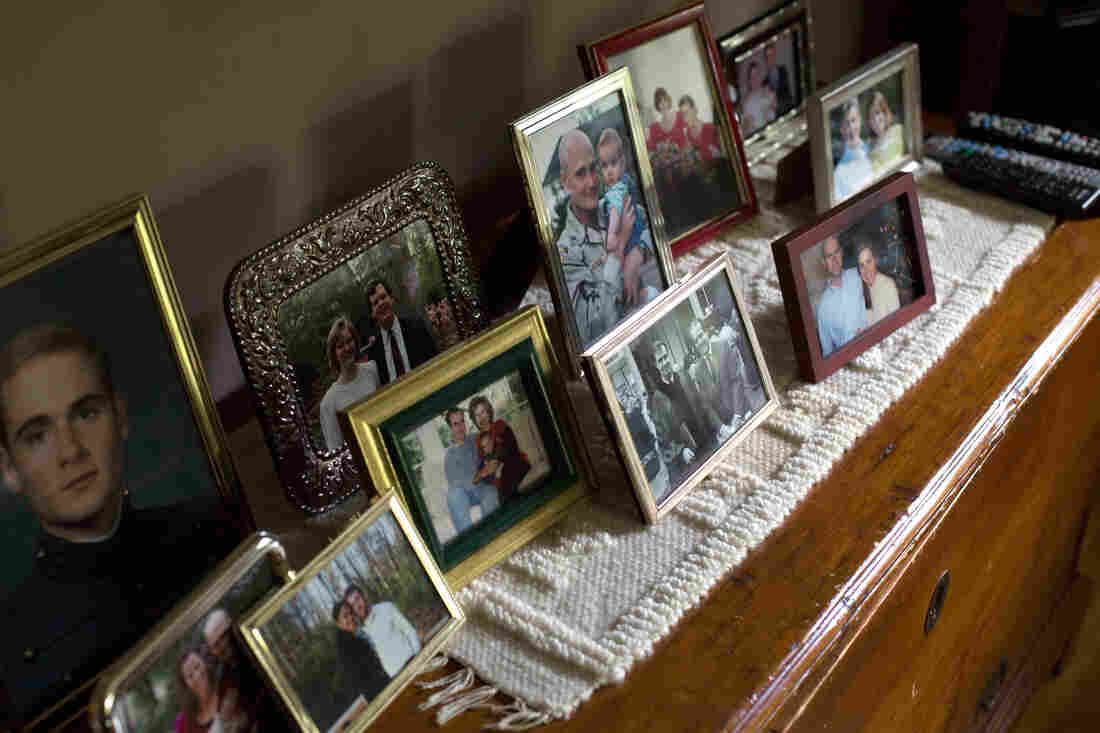 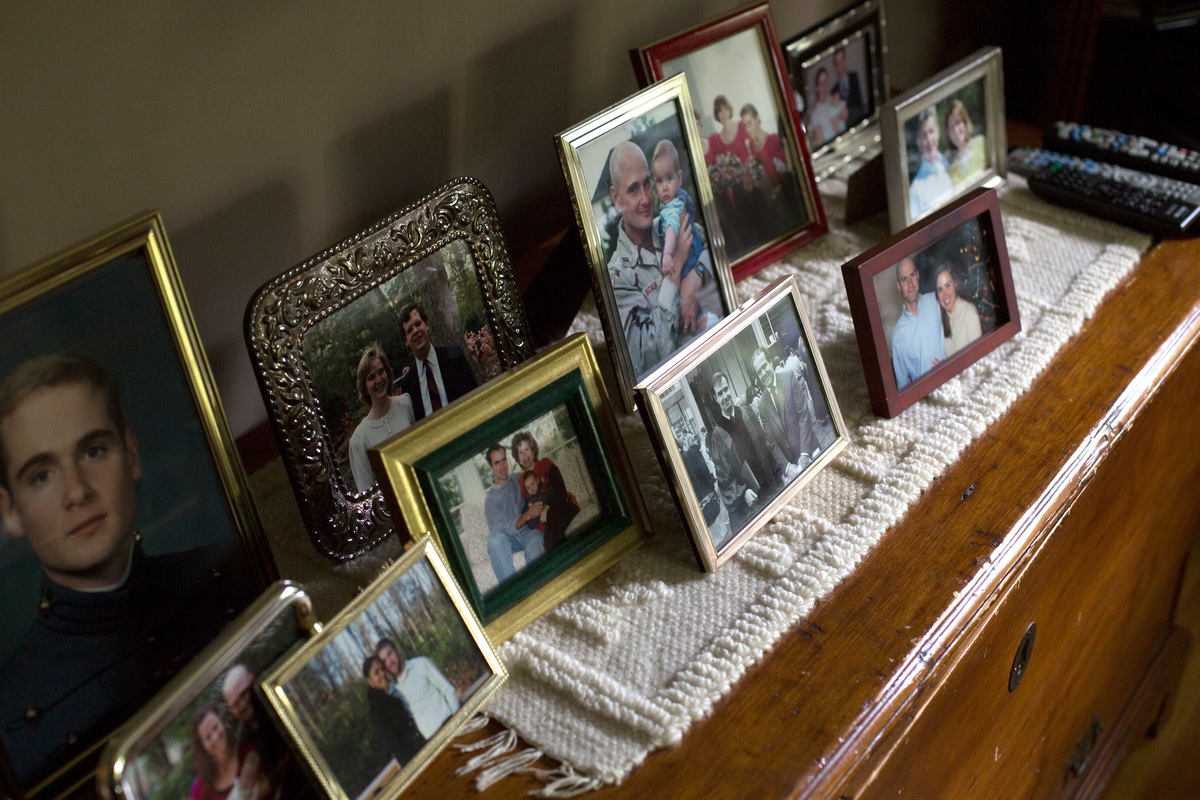 Family photos in the Scalia home.

The crowd roared, even as Scalia acknowledged that when speaking of lawyers, or judges, "It is certainly true that the main business of the lawyer is to take the imagination, the mystery, the romance, the ambiguity, out of everything that he touches."

Scalia then segued to a discussion of the First Amendment's guarantee of free speech, and why it forbids censoring ideas in the arts but not "lousy music," or, for that matter, nude dancing. As Scalia put it, "The First Amendment says what it says, not what we lovers of the arts would like it to say. This means, I'm sorry to say that, in my view, even music, as opposed to lyrics, is not covered."

Then there is what the younger Scalia calls, "the stump speech." It was the speech, with variations, that the justice gave all over the country, proselytizing his view of legal interpretation. A typical passage, found in NPR's archives, has Scalia intoning, "The Constitution that I interpret and apply is not living, but dead, or, as I prefer to call it, enduring. It means today not what current society, much less the court thinks it ought to mean, but what it meant when it was adopted." 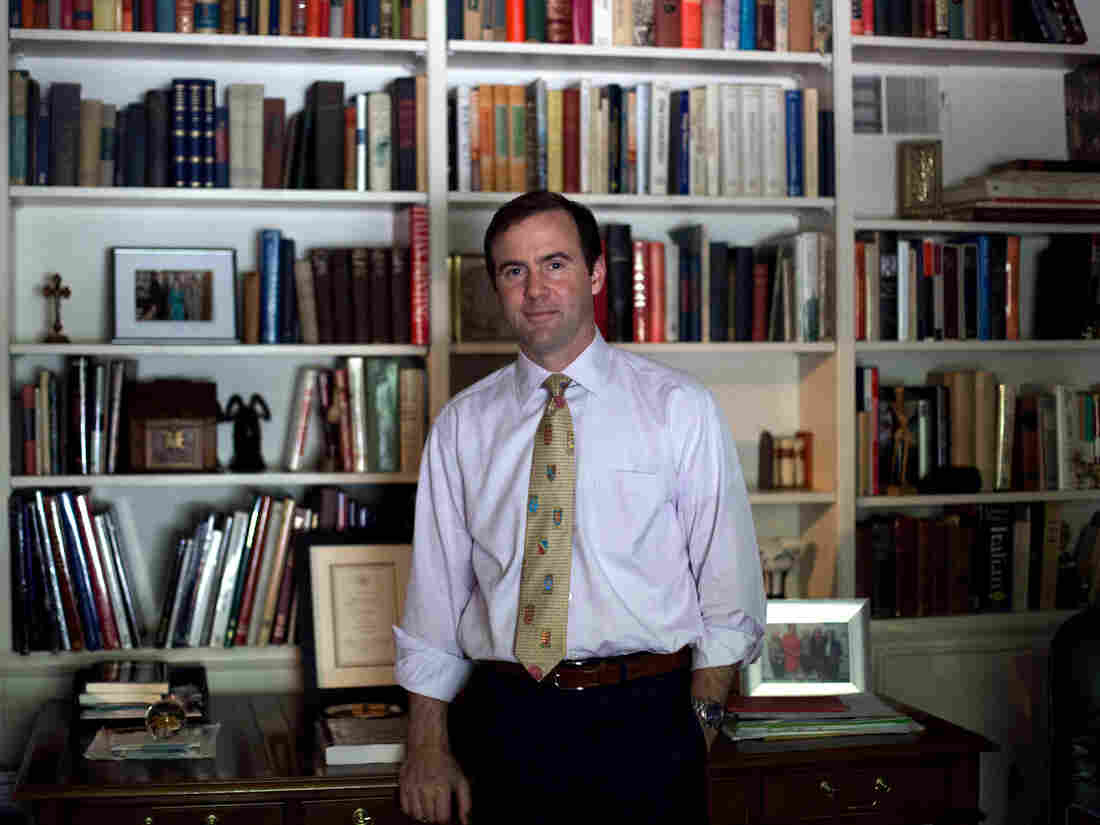 Christopher Scalia, the 8th of 9 children born to the late Supreme Court Justice Antonin Scalia, stands in his father's study in the family's home in Virginia. Jennifer Kerrigan/NPR hide caption 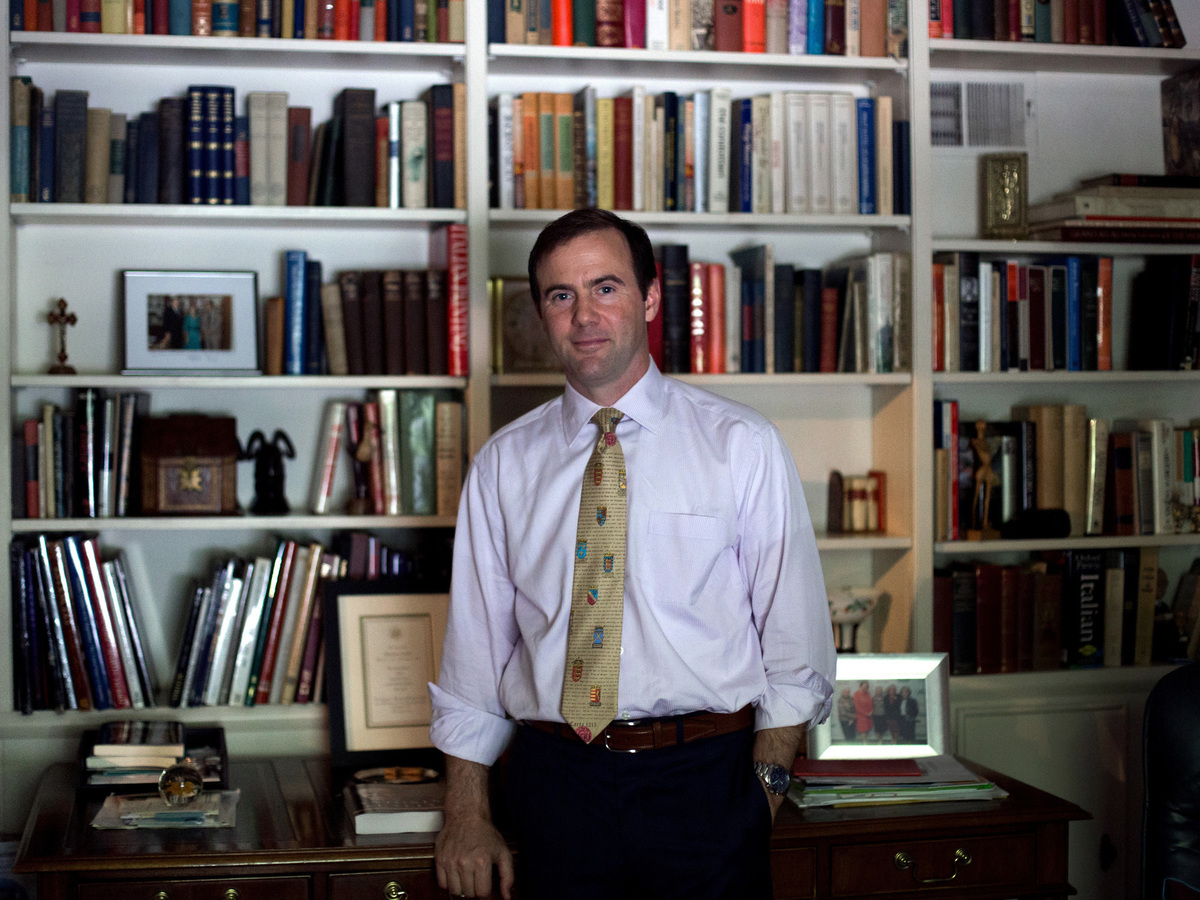 Christopher Scalia, the 8th of 9 children born to the late Supreme Court Justice Antonin Scalia, stands in his father's study in the family's home in Virginia.

Christopher says he had looked forward to finding the actual text of one such speech that he heard his father give in Madison, Wis. But, as he pored over boxes of texts and disks, he could not find it.

Instead, the elder Scalia had what he called "the outline."

It "was basically just a handful of words. I don't even think they were in complete sentences," Christopher says. 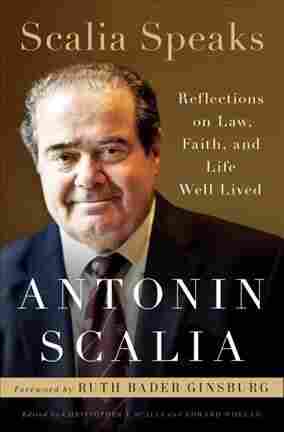 The justice insisted on having a printed copy of those fragments with him, almost as a good luck charm, Mrs. Scalia observes. "He would be getting ready to go on a trip, and I often would be pressing the suit," she says. "In the pocket...of almost every jacket he wore, there would be a copy, just a little printout of that."

In legal circles and among colleagues, Justice Scalia was famous for his vivid writing, especially his dissents. There are some very famous lines in those dissents, often delivered from the bench, with dramatic panache.

And as the lone dissenter from the court's 1988 decision upholding the independent counsel law, he wrote that the intrusion on presidential power was so obvious that, in contrast to most such cases, which, as he put it typically come to the court disguised "in sheep's clothing, ... this wolf comes as a wolf."

The line is so famous that Justice Ginsburg quoted it in that 2015 joint appearance with Scalia.

Dissents are in fact the subject of one of the speeches in Scalia Speaks. And it's here that Scalia talks about dissenting opinions as something of a liberation because the writer doesn't have to worry about the views of others, and can, to put it in the vernacular, let 'er rip.

For Scalia, that meant sometimes trashing a colleague's majority opinion with biting and personal commentary — in one case, for instance, saying that if he had joined the majority opinion, "I would hide my head in a bag." 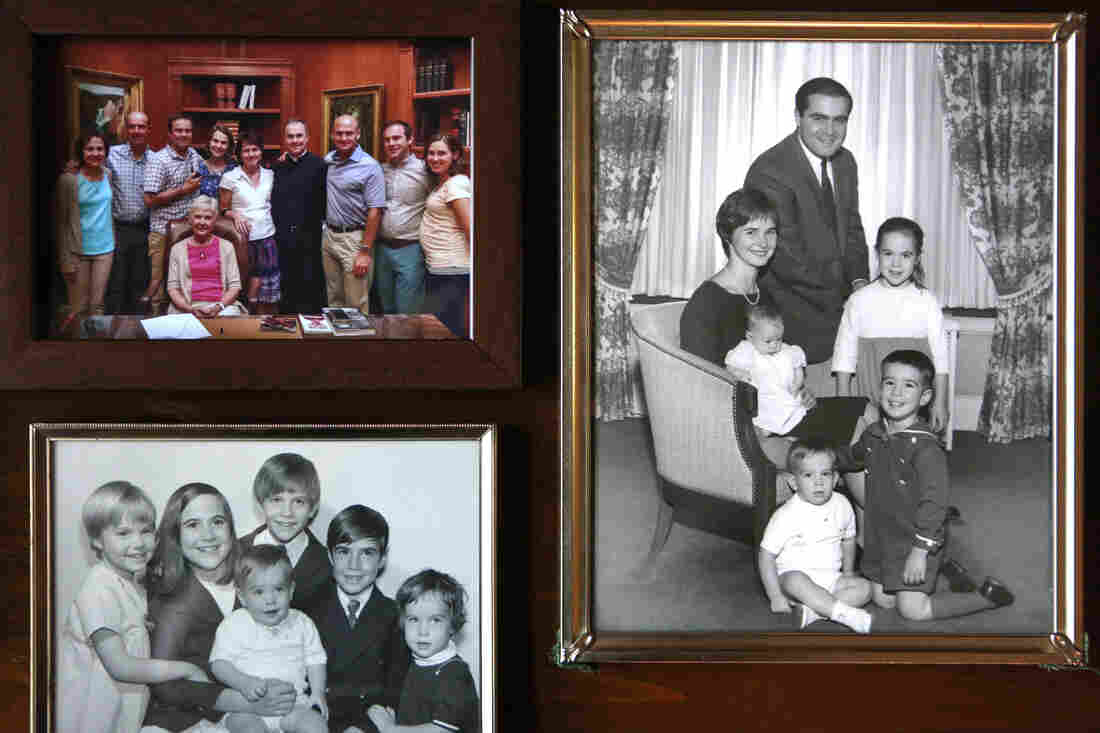 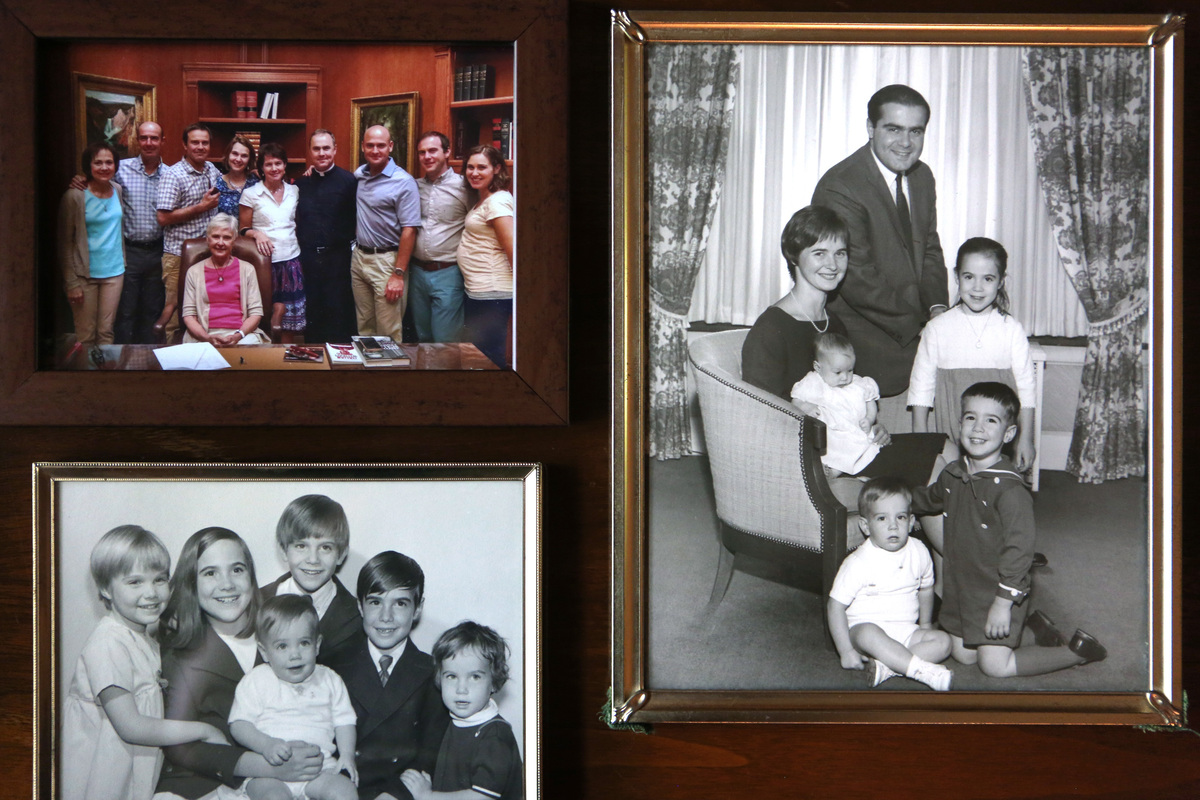 Family photos in the Scalia home.

Maureen Scalia says she would often hear her husband trying various phrases out loud while he worked on a dissent. "And every once in a while come in and read something to me, and I'd say, 'You're not really going to say that are you?' He said 'No, but it's really good isn't it?'"

There were some times that it appears Scalia didn't take her advice, that he went ahead and used some more-than-pointed language.

Shaking her head, Mrs. Scalia disavowed any responsibility for such pugilistic comments. "He didn't try it on me, that's why, she says, "He knew what I would say."