Accessibility links
Watch: Trump Calls Las Vegas Shooting 'An Act Of Pure Evil' The president addressed the nation from the White House on Monday morning, giving his prayers and condolences for the victims of Sunday night's mass shooting, which left at least 58 dead.

In brief remarks from the White House Diplomatic Reception Room, Trump called the shooting, in which police say at least 58 people were killed and over 500 were wounded, "an act of pure evil." He said he will visit Las Vegas on Wednesday, and he ordered flags flown at half-staff.

Trump praised first responders, including the Las Vegas Metropolitan Police Department, "for their courageous efforts." He said the speed with which they reacted to the shooting was "miraculous and prevented further loss of life." Trump noted that the FBI and Department of Homeland Security are working with local authorities on the investigation.

Trump said of the victims, most of whom were attending a country music concert, "We cannot fathom their pain; we cannot imagine their loss." The president quoted from Scripture that "the Lord is close to the brokenhearted," and said he and first lady Melania Trump are praying for the speedy recovery of the wounded and for the families of the victims.

"In moments of tragedy and horror," Trump said, the nation "comes together as one." He continued, "Our unity cannot be shattered by evil; our bonds cannot be broken by violence."

In the afternoon, the president held a moment of silence on the South Lawn of the White House with the first lady and dozens of White House staffers. 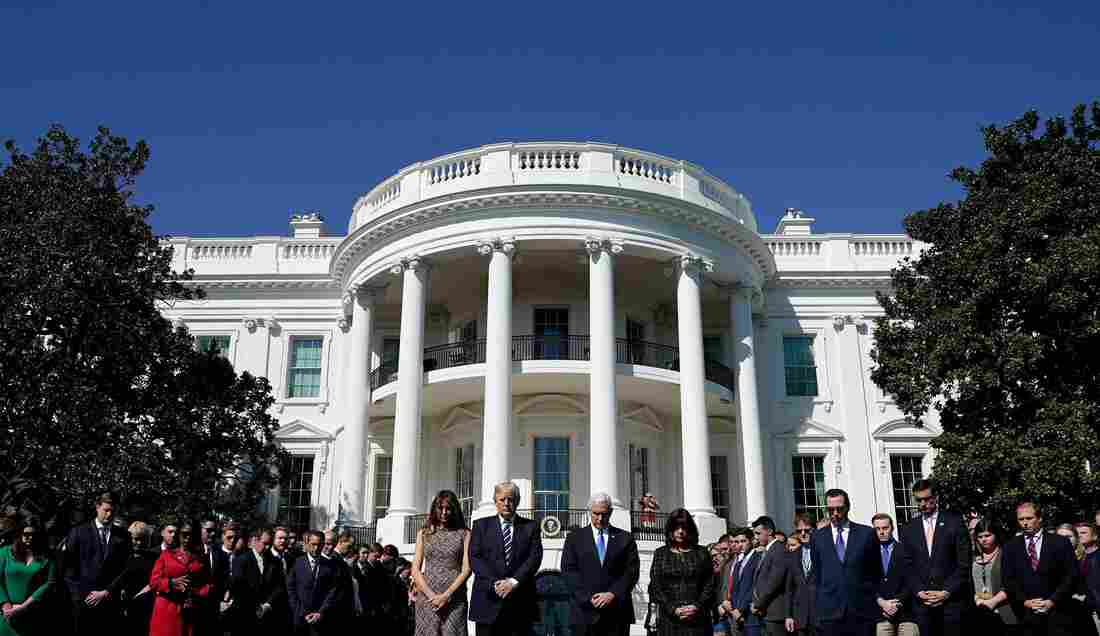 President Trump and first lady Melania Trump, Vice President Pence and his wife, Karen, participate in a moment of silence on the South Lawn of the White House on Monday for the victims of the shooting in Las Vegas. Mandel Ngan/AFP/Getty Images hide caption

Trump had been briefed earlier in the morning on the attack and tweeted, "My warmest condolences and sympathies to the victims and families of the terrible Las Vegas shooting. God bless you!"

The president's schedule had called for him to visit Puerto Rico on Tuesday in light of the hurricane damage there, and White House press secretary Sarah Sanders said that is still the plan.

My warmest condolences and sympathies to the victims and families of the terrible Las Vegas shooting. God bless you!