Accessibility links
Cartoonist Roz Chast Draws A 'Love Letter' To New York City, Cockroaches And All The New Yorker cartoonist channels her affection for the city into a new tongue-in-cheek guidebook, Going Into Town. "It's just fun," Chast says of New York. "Everything seems to suggest stories." 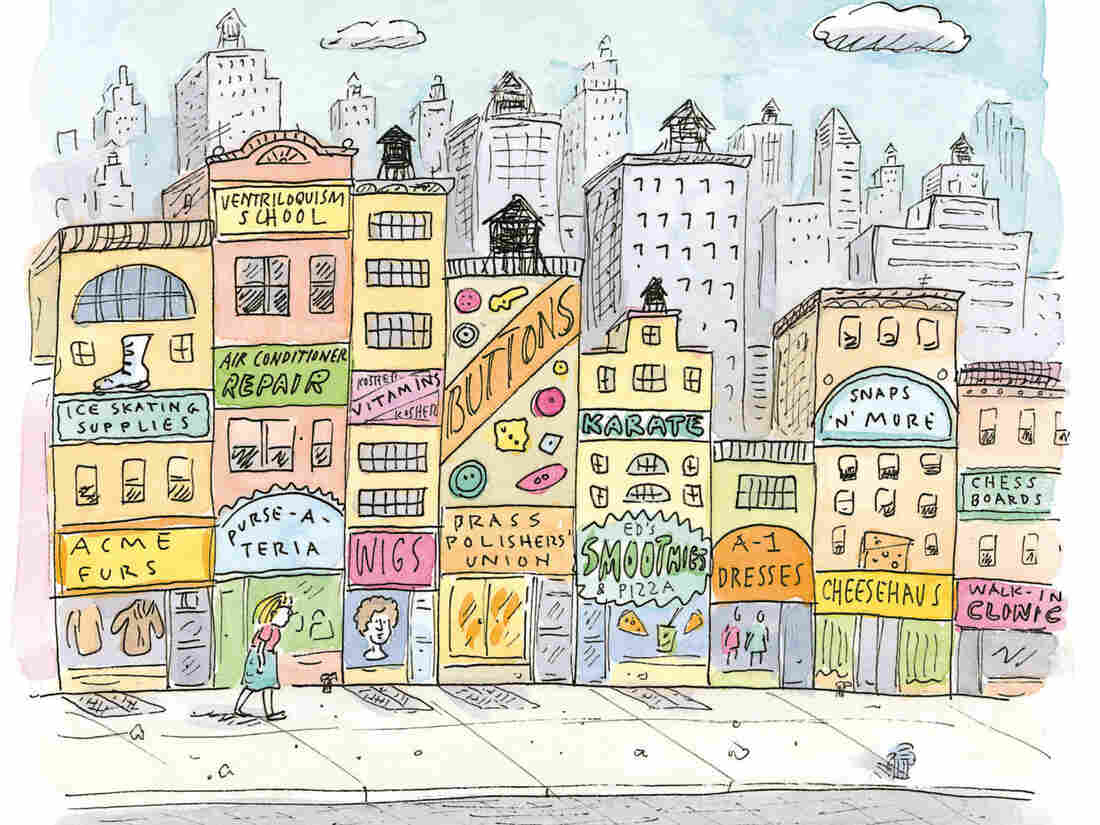 Cartoonist Roz Chast says she is inspired by the activity and commotion of New York City: "Everything seems to suggest stories." Roz Chast/Bloomsbury hide caption 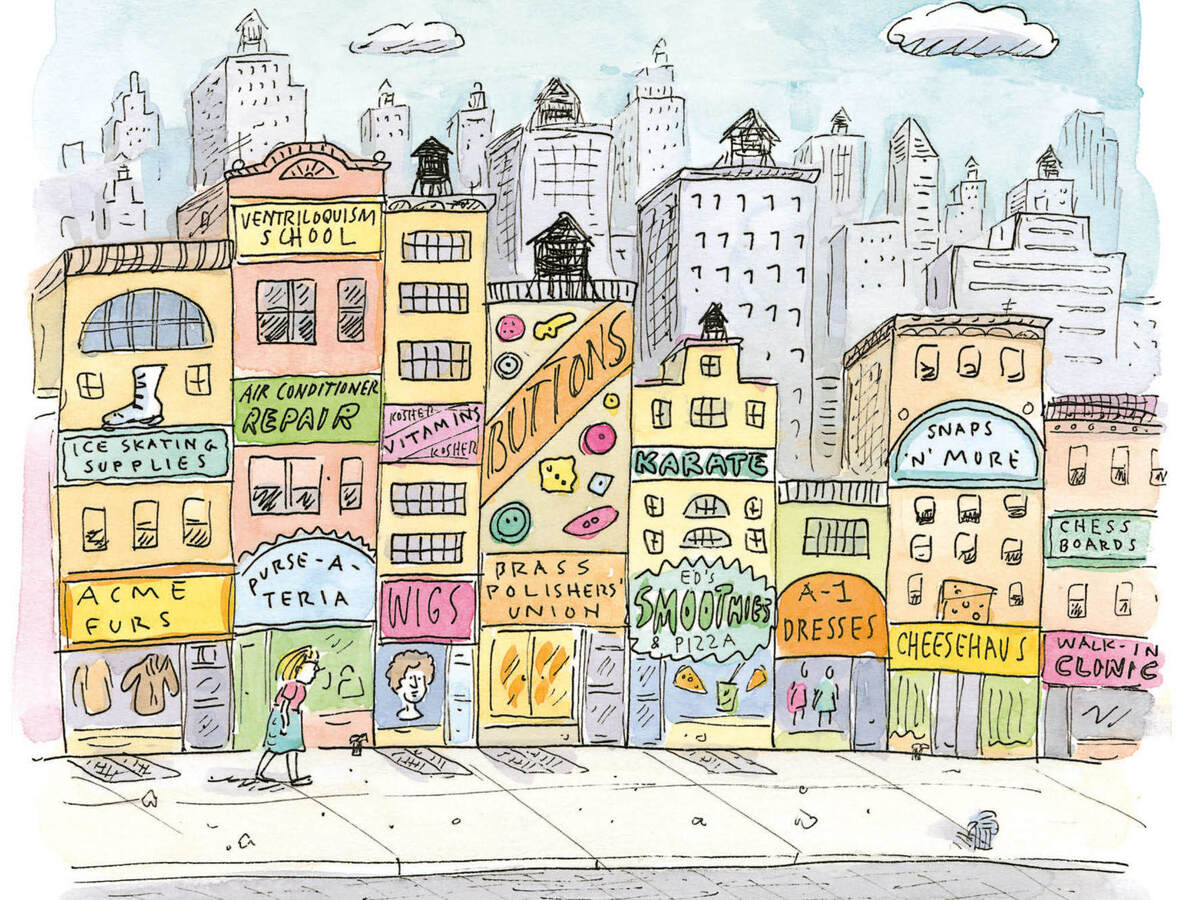 Cartoonist Roz Chast says she is inspired by the activity and commotion of New York City: "Everything seems to suggest stories."

New Yorker cartoonist Roz Chast is a city person. She grew up in an apartment building in Brooklyn, N.Y., and though she moved to the suburbs as an adult when she was pregnant with her second child, she never stopped loving the grit and excitement of New York City.

"Just about every street in Manhattan has that kind of density of visual information," she says. "It's just fun. I like looking at it. Everything seems to suggest stories."

A Love Letter to New York

When Chast's daughter was preparing to move to Manhattan for college, Chast wrote a guidebook for her, offering tongue-in-cheek tips for suburbanites navigating the city. Now Chast has adapted that guide for a larger audience. Going Into Town: A Love Letter to New York is a cartoon book about all the things Chast appreciates — or finds skeevy — about the city she loves.

On how to look at strangers in New York City

There's a way that, when you live in a city, you look at other people. ... You don't ever stare at anybody. You kind of look ... away. You kind of take note of them and register them and see them, but it's not as direct. Because my parents really did train me not to look at somebody directly, especially because they could be a nut and you didn't want to, like, set a nut off. That was a very big lesson from the time I was little: There are people that are just ready to blow and you don't want to be the person that, like, causes that to happen. 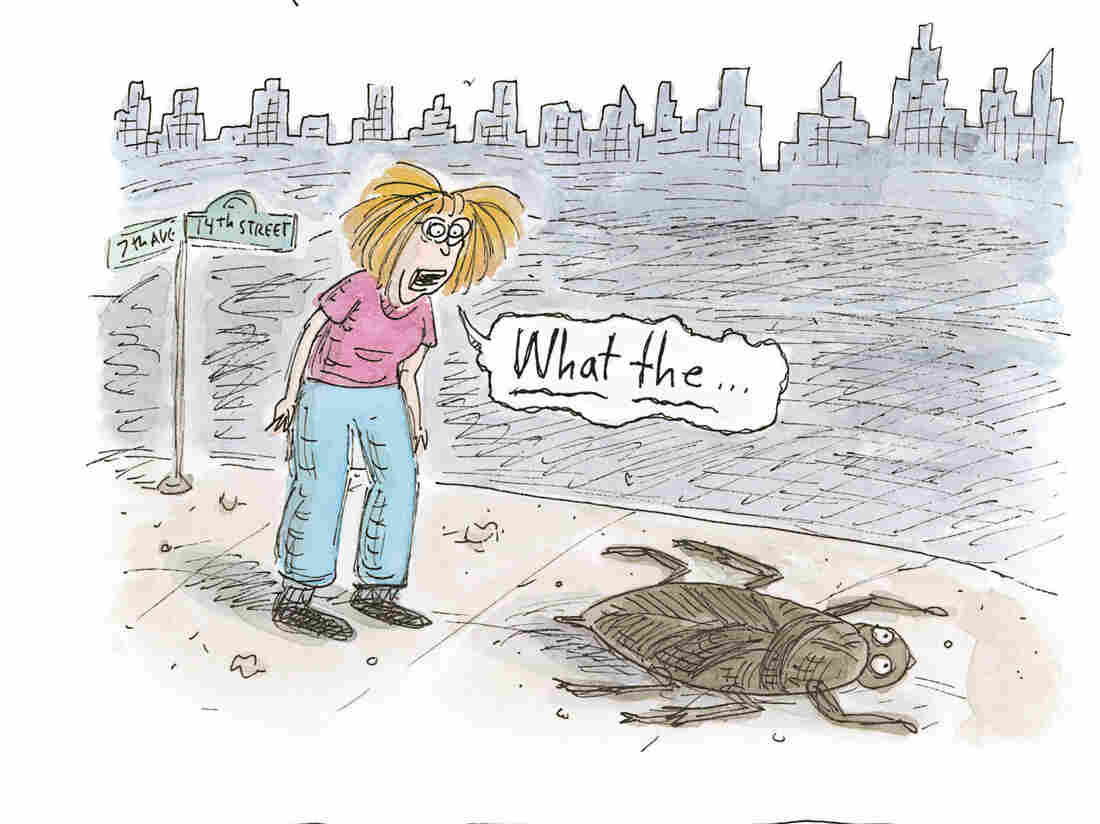 Going into Town includes a section on New York City's infamous water bugs, which are even bigger than cockroaches. Roz Chast/Bloomsbury hide caption 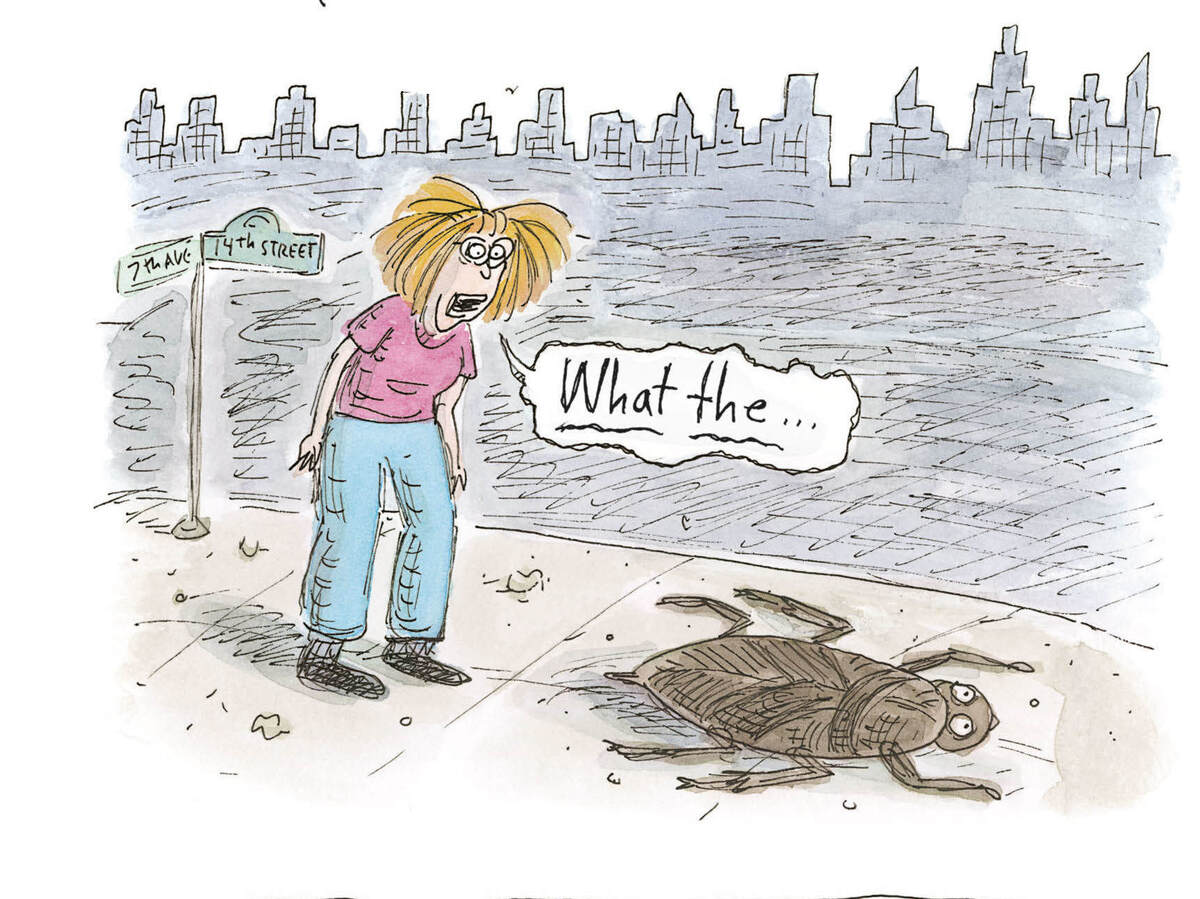 Going into Town includes a section on New York City's infamous water bugs, which are even bigger than cockroaches.

On her worst run-in with New York cockroaches

When I first lived on 73rd Street, I had a cockroach infestation, which I didn't realize when I first moved in. One time, it was so horrible, I came back after being out one night and I turned on the light in the kitchen and ... it was like thousands of cockroaches. It was like a cockroach convention, and it was so incredibly horrible. It's just almost beyond describing. And, of course, after that I told the super and they started getting the exterminator coming in regularly and then I would see an occasional cockroach.

And I'm still very conscious of that. I mean, as I said, I have a little place [in New York City] now and if I put on the news after 11, I don't blare it, you know. But there are some people, I think, who maybe they think it's OK to ride their pony around — that it's fine to keep a pony in an apartment and prance around — and it's just sort of mysterious. Why don't you know that's not OK?

On selling her first cartoon, Little Things, to The New Yorker in 1978

I did not have my hopes up because I was so sure that I was not going to sell anything to them. ... [But] they bought one. And out of the cartoons I submitted, that was probably the most personal of the lot — the weirdest one, the kind of thing that, like, when I'm doodling and making up stuff to make myself laugh, that would be the kind of thing. 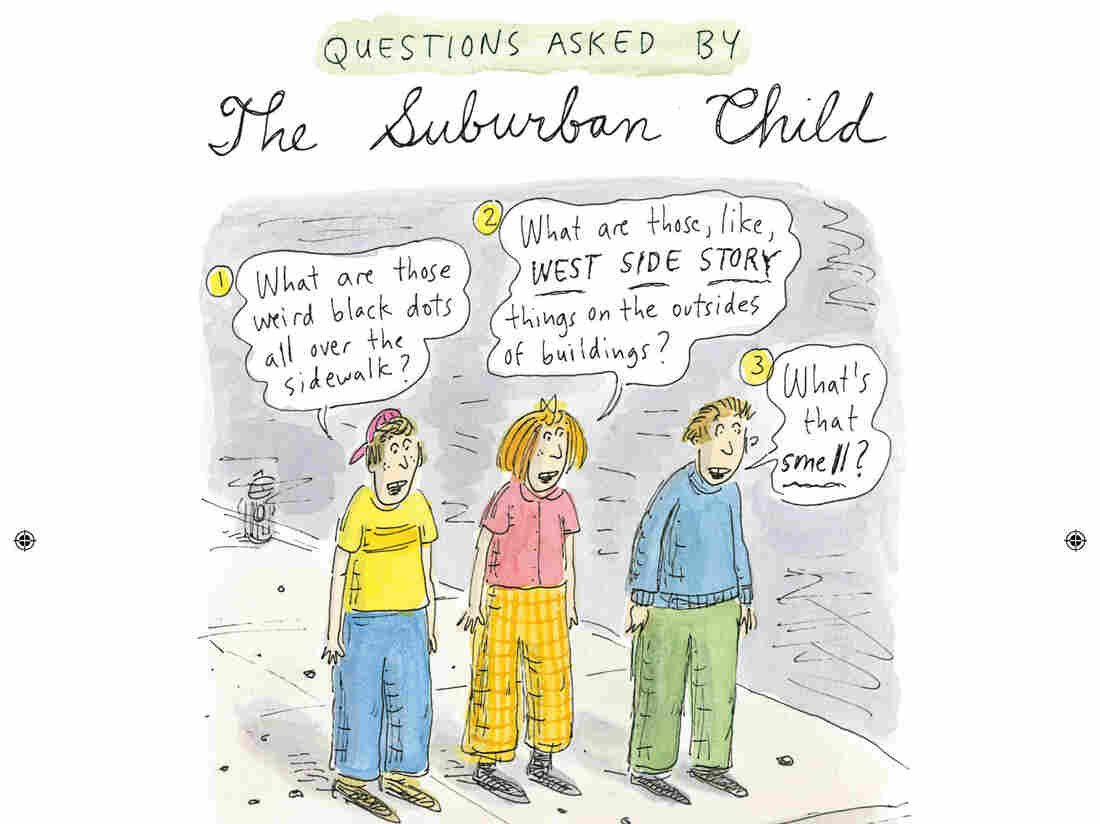 Chast's new book of cartoons was inspired, in part, by her daughter moving to New York City for college. Roz Chast/Bloomsbury hide caption 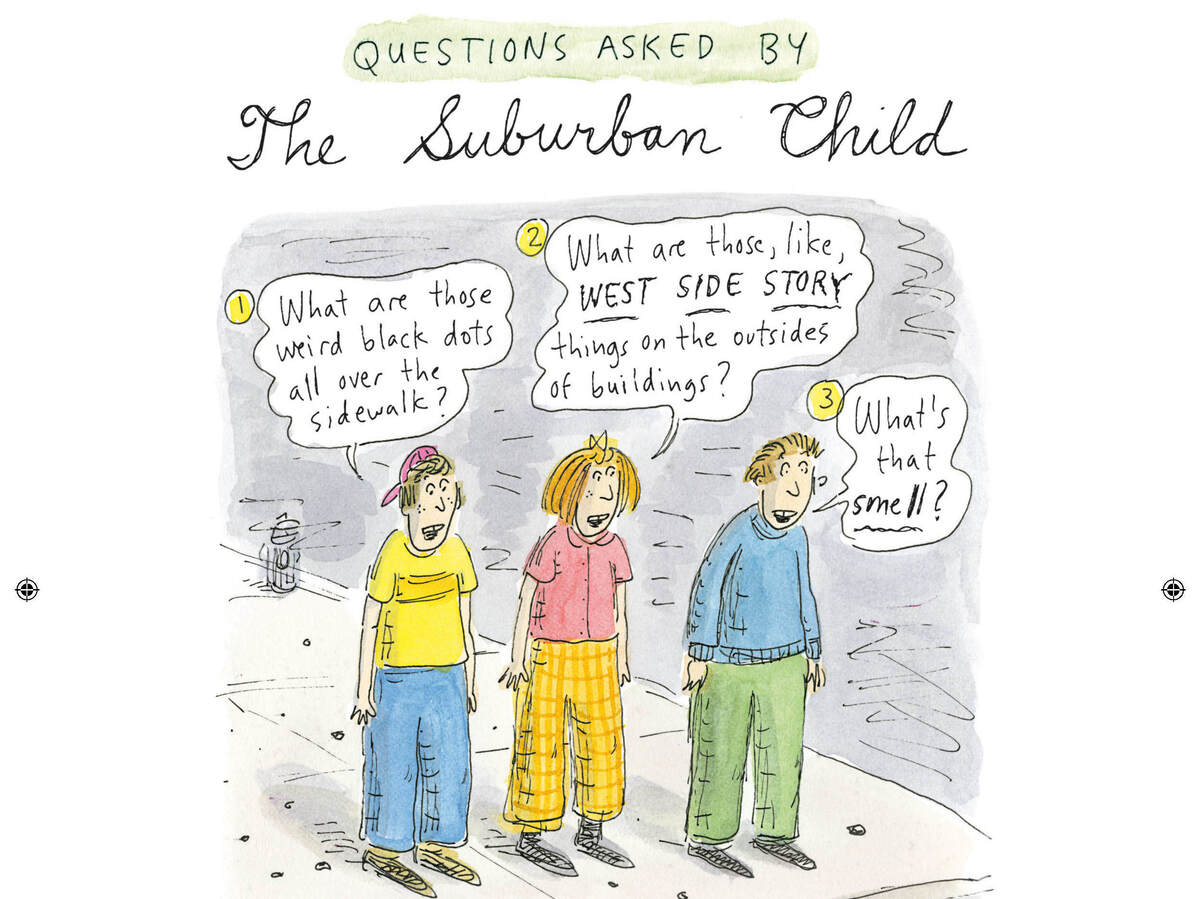 Chast's new book of cartoons was inspired, in part, by her daughter moving to New York City for college.

On not understanding the appeal of owning a lawn

There's something about suburbia which is just so bizarre. I don't really understand why anybody wants a lawn. I mean, I like greenery. I love the park. I love Central Park. I love when we travel, being out in nature. It's wonderful.

Sam Briger and Thea Chaloner produced and edited the audio of this interview. Bridget Bentz, Molly Seavy-Nesper and Nicole Cohen adapted it for the Web.