Accessibility links
A Scholar And His Octogenarian Dad Take On Homer's 'Odyssey' A few years ago, scholar Daniel Mendelsohn's dad made an unusual request: He wanted to take his son's seminar on Homer's Odyssey. Mendelsohn looks back on that experience in his new memoir. 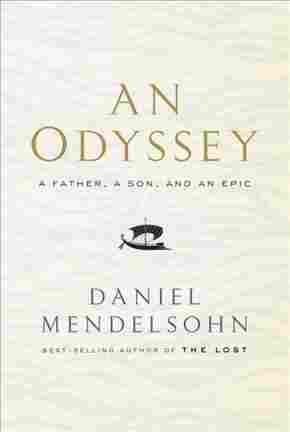 A Father, a Son, and an Epic

Title
An Odyssey
Subtitle
A Father, a Son, and an Epic
Author
Daniel Mendelsohn

Classics scholar Daniel Mendelsohn was preparing to teach his freshman seminar on Homer's Odyssey a few years back when he got an unusual add-in request: His father, Jay, wanted to join the class.

At first Mendelsohn wasn't sure it was a good idea. "I was a little bit afraid that having my 81-year-old dad in the class was going to disrupt the dynamic," he says.

But Mendelsohn agreed to let his dad join the class — in part because Jay promised to sit in the corner and listen silently to the seminar.

Things didn't exactly go as planned: "The very first day of class his hand shot up and he started contesting virtually everything I said," Mendelsohn recalls. "It was quite funny. It turned out to be remarkable, and I think he really ended up making [the class] so much better, actually, than it would've been."

After the class ended, Mendelsohn and his father went on a Mediterranean cruise that toured sites from the Odyssey. On the boat, Mendelsohn saw a side of his father he rarely saw growing up: a charming storyteller who would delight the other passengers singing songs from his youth at the piano bar.

A few months after their trip, Jay suffered a fall that led to complications from which he would never recover. Mendelsohn's new memoir is called An Odyssey: A Father, A Son and an Epic.

I think one reason was my dad in high school had been a kind of Latin whiz, and although his career ended up going in a totally different direction — he was a mathematician and a research scientist — I think he always had a lingering affection for the classics. ... So to some extent I think it was that. I think he wanted to reclaim something from his youth. ...

The other reason I think was that he was just curious about me. I think he thought it might be an interesting experience to have to sort of get closer to me in some sense.

On what his father thought of Odysseus, the hero of Homer's Odyssey

My father's hand shot up, and he says, "Well, I don't think Odysseus is a hero. What's so heroic? He lies all the time. He's moping around this island weeping because he can't get home. He's crying."

That drove my father absolutely bonkers, that the hero — this great Greek hero — cries all the time. He couldn't figure that one out, and he said, "He cheats on his wife. He's with this nymph Calypso, and they're messing around every night, and why is this guy supposed to be such a great hero?" And that was like the first hour of class. ...

A Father And Son Go On Their Last 'Odyssey' Together

My father — because he had this let's call it a "mathematical" view of life — he couldn't bear Odysseus because Odysseus, to some extent, represented everything that my father hated. Odysseus is nothing but gray areas. That's how he survives. ... He improvises. He lies. He famously makes up stories. He's cunning. He does sleep with Calypso and Circe and all these fabulous goddesses on his way back to his own true wife. And I think that just irritated my father. He not only disapproved of those things, but he was perplexed why this character is supposed to be so heroic.

On what his father, a mathematician, thought of Mendelsohn's work as a critic and professor of literature

I think he could never quite wrap his mind around the fact that as both a critic and as a professor of literature all I do all day long is interpret works of literature. The fact that there's no absolute factual basis for this activity, I think, was something that always perplexed him a little.

On the other hand, I will say that also part of teaching a text and certainly part of being a critic is that one has to marshal arguments in favor of ones' position, and that appealed to my dad — if you could make a great argument — because, of course, that's about reason and rationality and has a structure.

So that part he got. But ultimately, the fact that this ultimately comes down to my taste versus your taste — that was something that kind of left him bemused. It's not like numbers. The interpretation of literary text or taste is not somehow inherent of the structure of the cosmos the way that mathematics [is]. And for that reason, I don't think he could ever quite take it totally seriously.

On coming out of the closet to his parents in college

When I came out to my parents when I was just in my junior year at the University of Virginia, as I recall, I had worked myself into this frenzy. Look, you have to remember, it was 1980; it was a very different world. Things are a lot easier now. And so I had sort of worked myself into this frenzy of anticipation and I started talking to my parents and I must say, to her credit, my mother fell asleep. That's the God's truth: My mom fell asleep and my father nudged her and he said, "Don't you think you want to respond to this?" And she said, "Oh, Daniel's a good boy, I'm sure he will be fine." Which if I have any sanity, it's probably because of that.

Sam Briger is a producer at Fresh Air.

Roberta Shorrock and Therese Madden produced and edited the audio of this interview. Bridget Bentz, Molly Seavy-Nesper and Nicole Cohen adapted it for the Web.