Accessibility links
Trump Touts Relief Efforts In Puerto Rico: 'We've Saved A Lot Of Lives' Despite criticism of the administration's response, the president was self-congratulatory upon arriving on the island and contrasted the not yet fully known death toll with that of Hurricane Katrina. 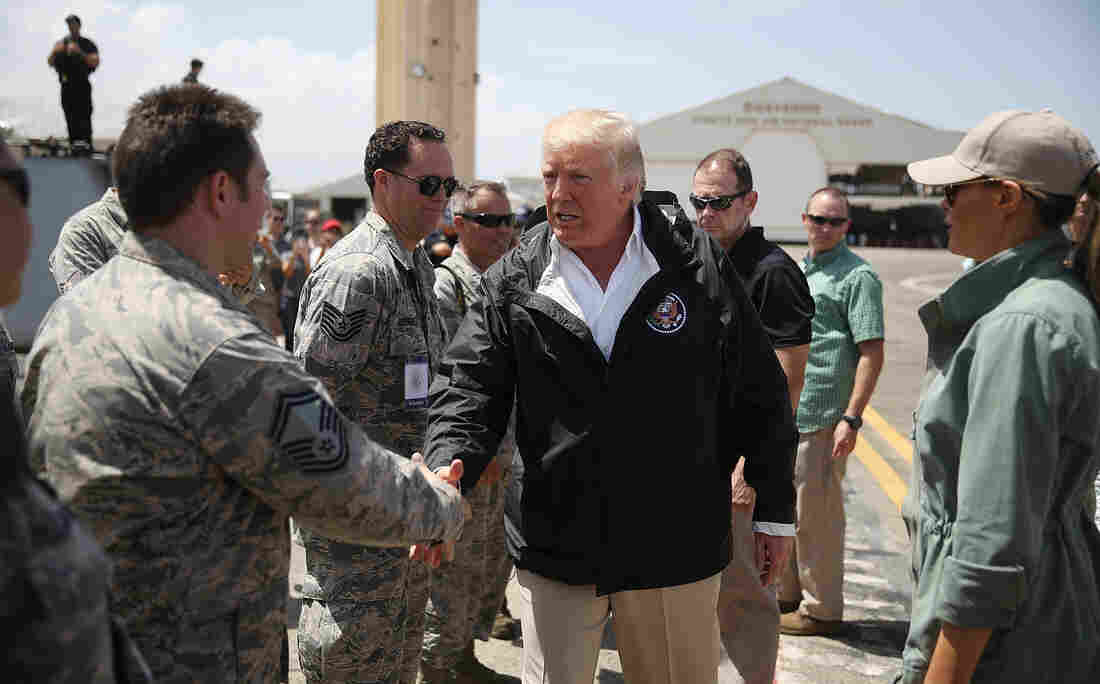 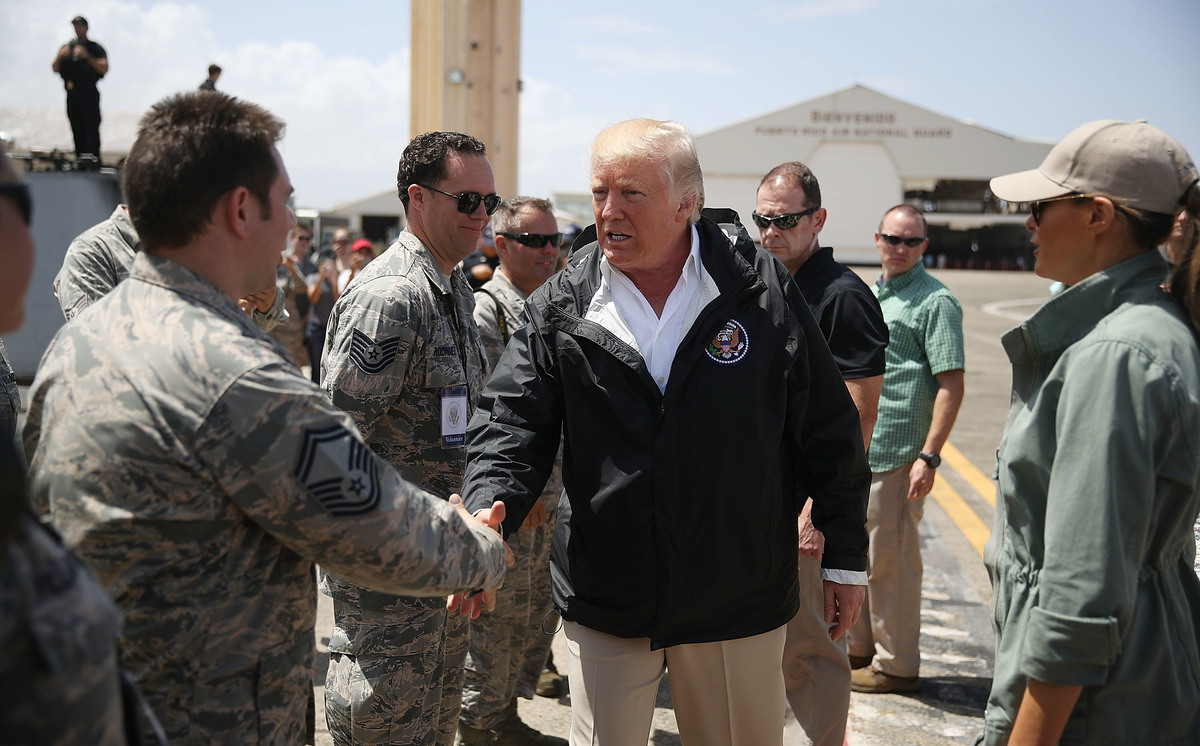 President Trump greets members of the U.S Air Force at the Muñiz Air National Guard Base in Carolina, Puerto Rico. Trump visited the island on Tuesday in the aftermath of Hurricane Maria.

President Trump traveled Tuesday to devastated Puerto Rico following his administration's maligned response to Hurricane Maria. But as soon as he stepped off the plane, the president was in a self-congratulatory mood.

In a hurricane briefing Trump praised his Cabinet, contrasted the devastation with "a real catastrophe like [Hurricane] Katrina," threw in an aside about how much Puerto Rico recovery was costing the U.S., and later was filmed throwing paper towels into a crowd as part of efforts to distribute supplies.

"Now I hate to tell you, Puerto Rico, but you've thrown our budget a little out of whack," Trump said jokingly, "because we've spent a lot of money on Puerto Rico, and that's fine. We've saved a lot of lives."

Referring to the storm's death toll, previously 16 lives lost, Trump seemed to be saying that at least it hadn't been as bad as past hurricanes.

"What is your death count as of this moment?" he asked local officials. "17? 16 people certified, 16 people versus in the thousands."

The office of the governor said later Tuesday night that the death toll had risen to 34.

On Friday, Acting Homeland Security Elaine Duke told reporters that the death toll had been relatively low and that the response had been "a good-news story in terms of our ability to reach people." But that number is all but certain to climb. 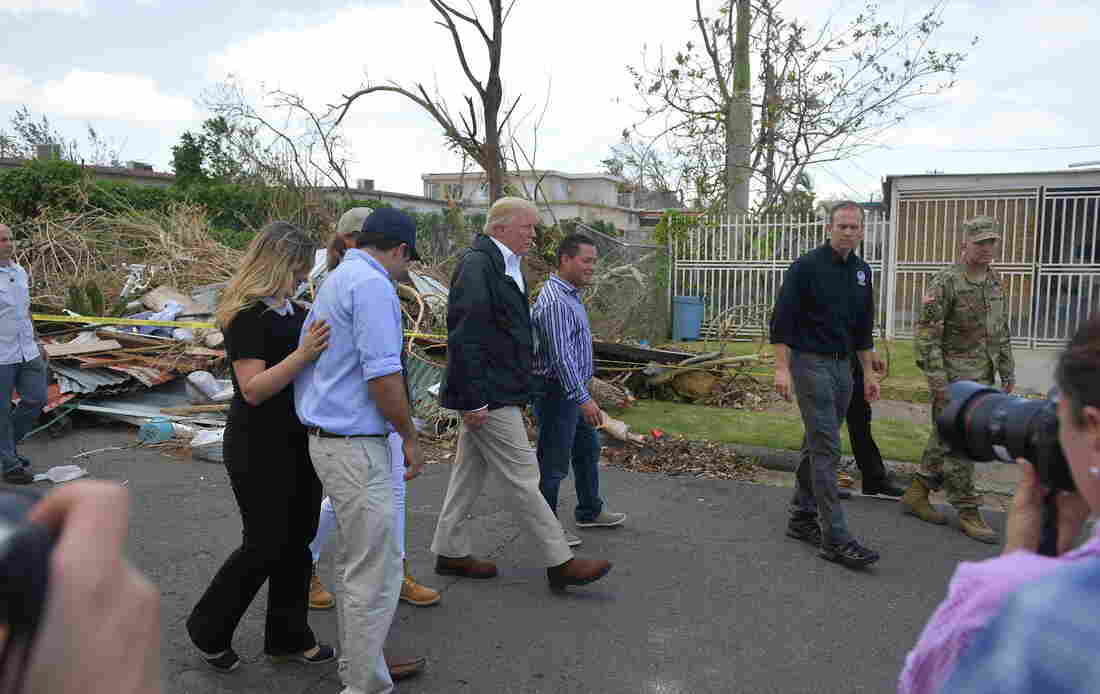 Soon after stepping off Air Force One in San Juan, Trump, his Cabinet officials who traveled with him and White House aides met with Puerto Rican officials in a hangar at Muñiz Air National Guard Base.

"The governor is not even from my party and he was tremendously supportive," Trump said of Puerto Rican Gov. Ricardo Rosselló. "Right from the beginning this governor did not play politics."

The comments appeared to be a dig at San Juan Mayor Carmen Yulín Cruz, who has criticized Trump's response to the storm. Hurricane Maria hit Puerto Rico as a Category 4 storm, leaving most of the island without power, clean drinking water or access to food and supplies.

Cruz attended the president's briefing on Tuesday, and soon after Trump stepped off Air Force One they did shake hands. But Cruz sat with her hands clasped and didn't clap as Trump praised FEMA Director Brock Long, Duke, White House Homeland Security adviser Tom Bossert, Delegate Jenniffer González-Colón and others.

In an interview later Tuesday afternoon with CNN, Cruz said that an off-camera meeting with White House officials was productive, but she criticized some of the comments the president made during his visit, especially what appeared to be a joke about the costs the island's devastation is adding to the U.S. deficit.

"It doesn't make you feel good," said Cruz. "It's about respect for Puerto Rico."

"Sometimes his style of communication gets in the way," she also said, adding, "It goes to prove a lack of sensibility."

Trump and first lady Melania Trump did get to interact directly with some of the victims of Hurricane Maria. While on a walking tour in Guaynabo, they met members of a family who told them how they had been without power since Hurricane Irma, even before the more devastating Maria struck the island.

"You always come back," the president told them.

"Puerto Rico is Puerto Rico," one of the men in the family responded.

Another family talked about how it had been trapped in its home during the storm.

"You know who helped them? God helped them," Trump said. "That's right."

When asked by reporters about the scenes he had surveyed, Trump said, "Well, what I see is an incredible job done by FEMA, the Air Force and the Navy."

Trump and local officials also stopped by a church that had been prepped for his arrival with signs that read "Proud Americans," "Let's Make Puerto Rico Great Again" and "God bless You Mr. President."

Supplies like rice and paper towels were laid out for Trump and others to distribute to the crowd. At one point, the president took the rolls of paper towels and began throwing them into the crowd like basketballs.

Even before he arrived in Puerto Rico, Trump touted his administration's response.

"I think it's now acknowledged what a great job we've done, and people are looking at that," he said as he was departing the White House on Tuesday. "And in Texas and in Florida, we get an A-plus. And I'll tell you what, I think we've done just as good in Puerto Rico, and it's actually a much tougher situation. But now the roads are cleared, communications is starting to come back. We need their truck drivers to start driving trucks."

For days, Trump has been under intense criticism for slow efforts to get help to the island, which he explained last Friday was in part because it was "surrounded by water."

Trump has also alluded to the territory's "broken infrastructure & massive debt" as another reason its recovery has been slower than in Florida and Texas, which were also battered recently by hurricanes.

Trump did encounter some of his critics during the trip, too. As his motorcade passed a highway with downed trees and other damage, some residents were lined up taking photos. Meanwhile, one woman held up a sign that read, "You are a bad hombre."

Upon his return to the White House later Tuesday evening, Trump said he hadn't heard any criticism while on the ground.

"They were so thankful for what we have done. I think it has been a great day," the president said. "We only heard thank yous from the people of Puerto Rico. They are great people, and it was really something that I enjoyed very much."