Accessibility links
Supreme Court Partisan Gerrymandering: How Much Is Too Much? The Supreme Court heard oral arguments Tuesday in a gerrymandering case that could have sweeping political consequences. 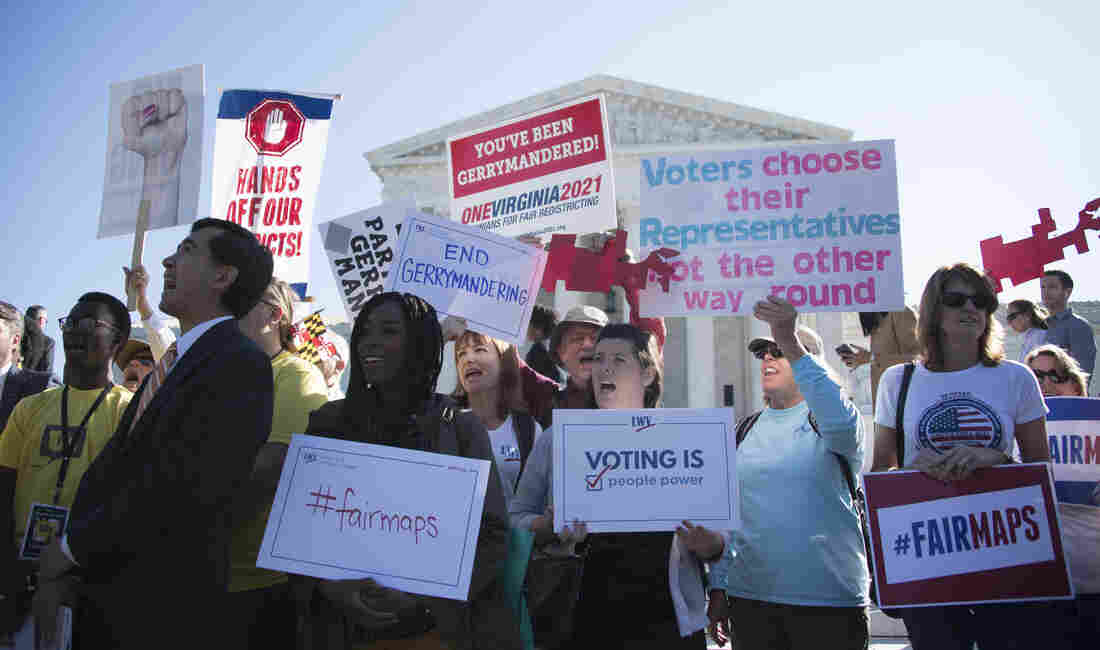 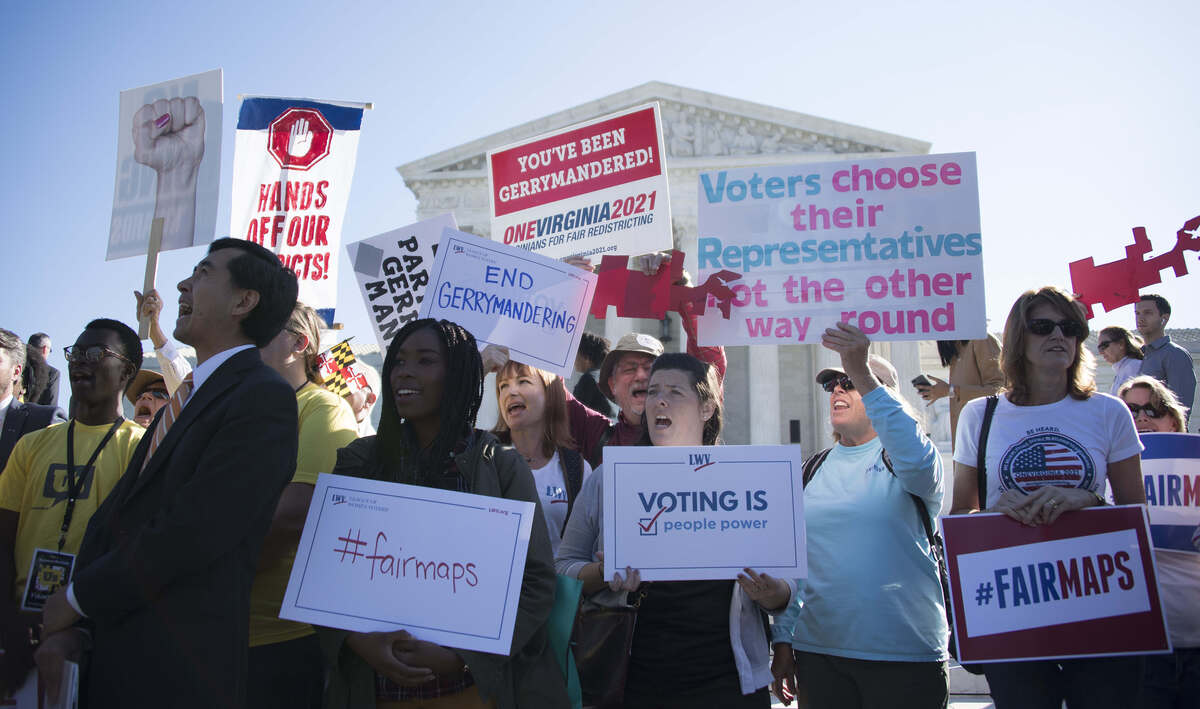 Demonstrators protest outside the Supreme Court on Tuesday as the court hears arguments about partisan gerrymandering.

Chief Justice John Roberts warned Tuesday that the Supreme Court's "status and integrity" could be jeopardized if a majority of the justices declare that there is a constitutional limit to partisan gerrymandering. At the same time, the court's four liberal justices warned that failing to act poses a threat to democracy.

With the court apparently split 4-4 along liberal-conservative lines, the man in the middle is Justice Anthony Kennedy, who in a 2004 court opinion left the door open to declaring extreme partisan gerrymandering unconstitutional if "manageable standards" could be developed for identifying which ones are extreme.

Partisan gerrymandering is the practice of drawing legislative and congressional district lines to maximize and perpetuate the power of an incumbent political party.

The test case before the court is from Wisconsin. In 2011 Wisconsin Republicans completely controlled the redistricting process for the first time in four decades. A divided federal court later found that Republicans, using high-speed computer technology along with new voter data, were able to draw new district lines to solidify their control of the Legislature for at least the rest of the decade, if not longer.

Indeed, a year after the redistricting, Republicans captured only a minority of the statewide vote — 48.6 percent — but, as they had privately predicted, they still won 60 of the 99 state legislative seats, while the Democrats, who had won a majority of the vote, captured a mere 39 seats.

Inside the Supreme Court chamber, all eyes were on Kennedy. But he gave no hint as to his thinking, except that he did not seem inclined to derail the case on procedural grounds, a possibility that some of his fellow conservatives seemed quite interested in.

While Justice Samuel Alito conceded that "gerrymandering is distasteful," he disdained the idea of trying to find manageable standards.

And Justice Neil Gorsuch mocked the various standards put forth, comparing them to his "steak rub" recipe — "a pinch of this, a pinch of that."

The court's liberals, in contrast, focused on the question Kennedy first raised in 2004: manageable and fair standards for judges to use in determining which are the extreme partisan gerrymanders.

Justice Stephen Breyer had a series of suggested steps: Limit judicial oversight to cases where one political party has complete control of the redistricting process and uses that advantage to draw district lines that, as in this case, give the incumbent party a statewide victory with a minority of votes or otherwise deeply entrench itself for years to come.

In evaluating a partisan gerrymander, he suggested, judges should ask whether the plan is an outlier in terms of the way it treats one party as opposed to the other and whether there was a neutral motive for the way the district lines were drawn — for instance, to create districts of equal population, or to prevent breaking up counties or municipalities.

Wisconsin Solicitor General Misha Tseytlin called Breyer's suggestion "a nonstarter" that would end up as a "battle of experts" in the courts.

Justice Elena Kagan noted that state legislators rely on these same experts to entrench the party in power. Drawing district lines, she said, is no longer "airy fairy" guesswork, but "pretty scientific."

Renewed Calls For Patriotism Over Politics When Drawing District Lines

Justice Sonia Sotomayor observed that Wisconsin Republicans relied on these very experts to design and refine maps and to make the districts "more gerrymandered."

So why didn't they take one of the less gerrymandered maps? Sotomayor asked.

"Because there was no constitutional requirement that they do so," Tseytlin replied, "as long as they followed traditional principles like having districts with equal populations."

Justice Ruth Bader Ginsburg wasn't buying the argument. "What's really behind all this?" she asked. What becomes of the "precious right to vote, if you can stack a legislature?"

The future of democracy

Making the case for judicial oversight of partisan gerrymandering was lawyer Paul Smith, vice president of litigation and strategy at the Campaign Legal Center.

"What the state is asking for here," he said, "is a free pass to continue using an assembly map that is so extreme that it effectively nullifies democracy."

But Chief Justice Roberts raised an institutional concern. "The main problem for me is [that if you prevail here], there will naturally be a lot of these claims raised around the country. ... And every one of them will come here for a decision on the merits," he said.

"We will have to decide in every case whether the Democrats win or the Republicans win" based on "sociological gobbledygook," Roberts added. And "the intelligent man on the street" will believe that the Supreme Court favors one party or the other, which "is going to cause very serious harm to the status and integrity of the decisions of this court in the eyes of the country."

Those cases are already being brought, replied lawyer Smith. "It may be that you can protect the court from seeming political," he said, "but the country is going to lose faith in democracy big time."

The modern gerrymander "is not your father's gerrymander," Smith declared. It is instead gerrymandering on steroids, fueled by computers, new kinds of voter data and a polarized electorate. "If you let this go" without judicial oversight for the outliers, he warned, "in 2020 you're going to have a festival of copycat gerrymandering the likes of which this country has never seen."

Although the Wisconsin case was brought by Democrats, it has won support from many prominent Republicans, among them two former GOP presidential candidates, former Sen. Bob Dole of Kansas and Sen. John McCain of Arizona, as well as Arnold Schwarzenegger, who as governor of California pushed through an independent redistricting commission — something that is not permitted in most states, including Wisconsin.

Schwarzenegger attended Tuesday's Supreme Court arguments and spoke at a rally outside afterward, telling a cheering crowd, "It's time to say hasta la vista to gerrymandering." 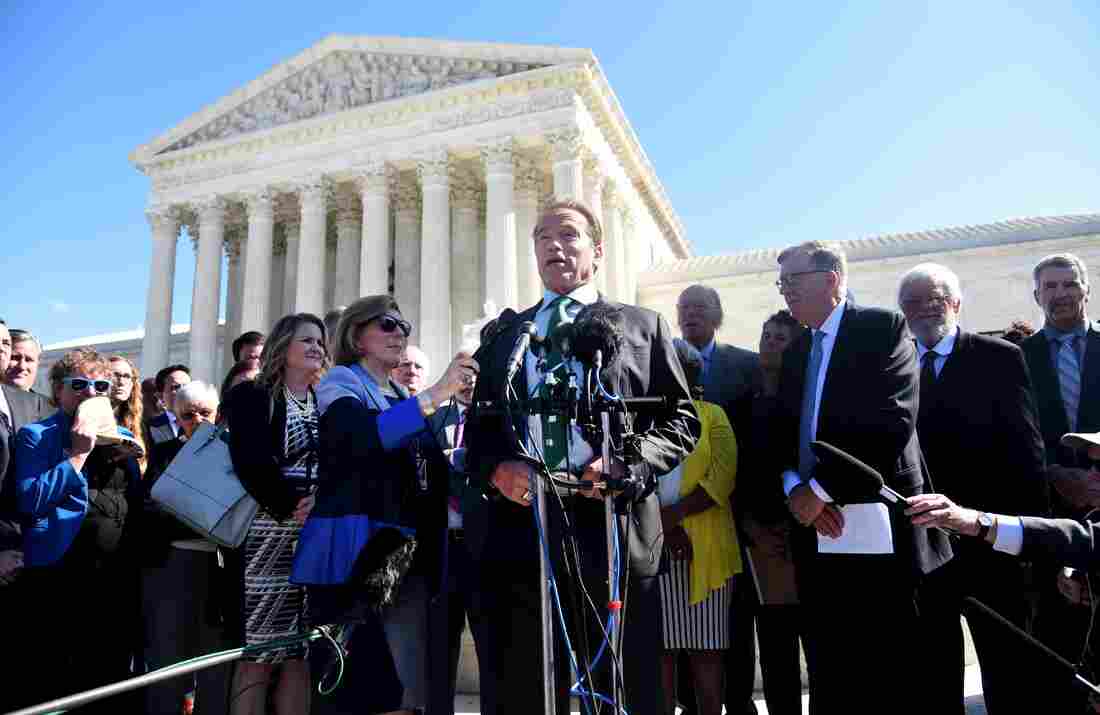