Accessibility links
New Muhammad Ali Biography Reveals A Flawed Rebel Who Loved Attention "I don't think we do Ali any good by treating him as a saint," says biographer Jonathan Eig. "He was a human being, and he was deeply flawed, but ... he had the spirit of a rebel." 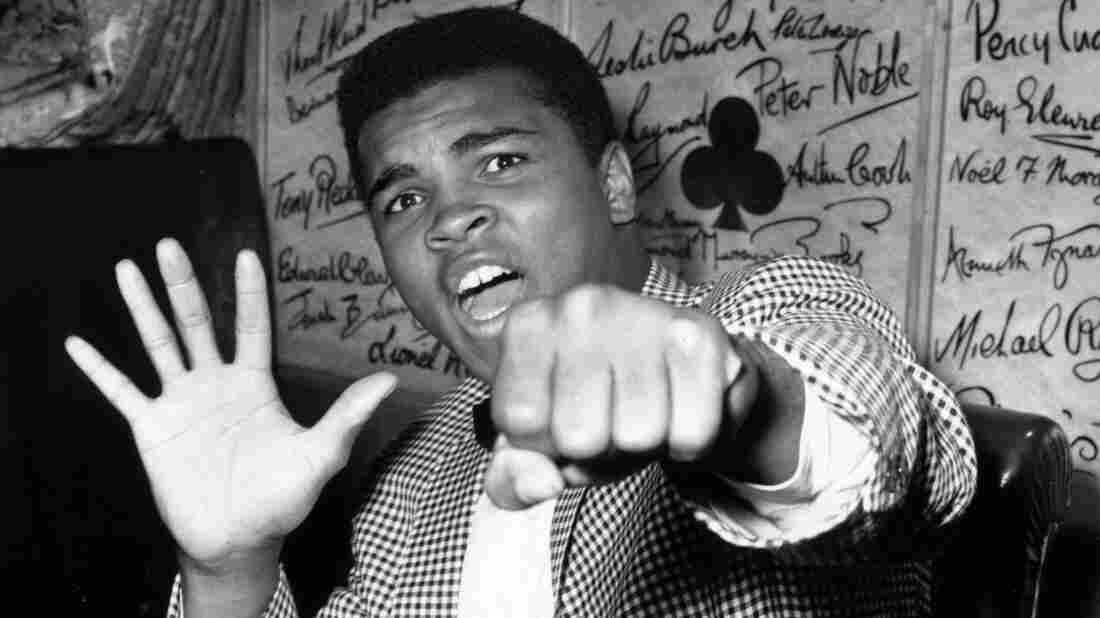 On May 27, 1963, Ali (known then as Cassius Clay) held up five fingers in a prediction of how many rounds it would take him to win against British boxer Henry Cooper. In June 1963, he fulfilled his prediction and was declared the bout winner after five rounds. Kent Gavin/Getty Images hide caption 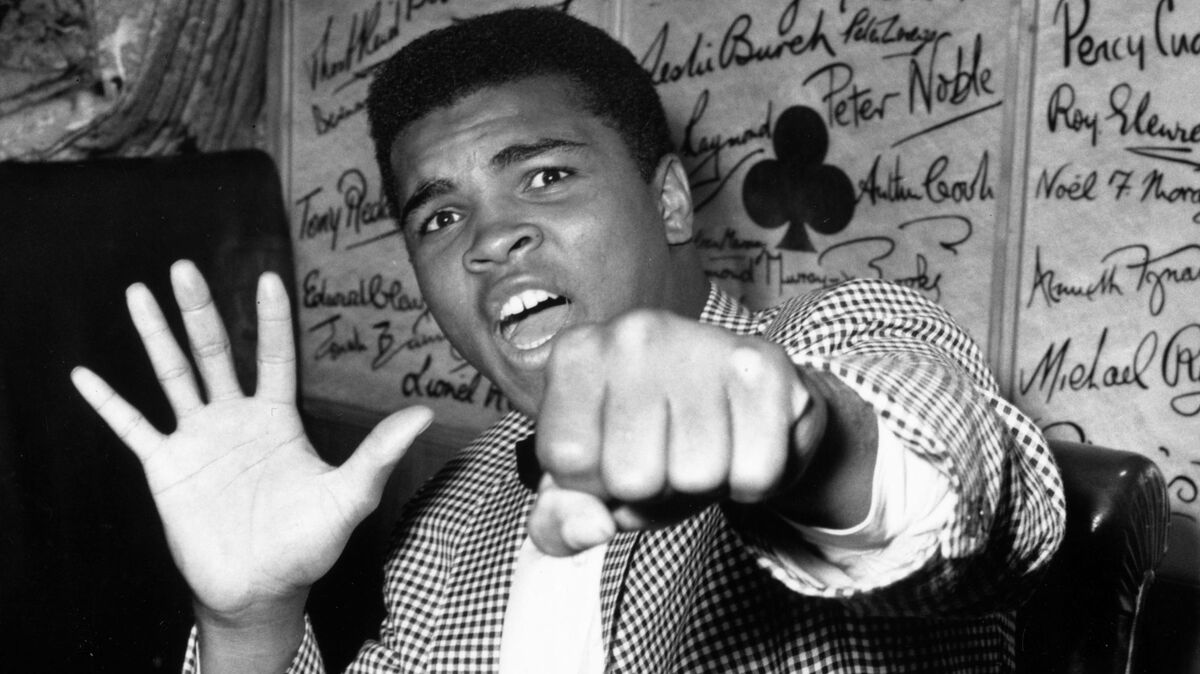 On May 27, 1963, Ali (known then as Cassius Clay) held up five fingers in a prediction of how many rounds it would take him to win against British boxer Henry Cooper. In June 1963, he fulfilled his prediction and was declared the bout winner after five rounds.

Decades before NFL player Colin Kaepernick took a knee during the national anthem to protest police treatment of African-Americans, boxer Muhammad Ali roiled white America with his 1967 resistance to the Vietnam War draft.

The boxer had converted to the Nation of Islam a few years earlier, and he explained his resistance to the war by saying, "I ain't got no quarrel with them Viet Cong."

Ali's resistance to the draft resulted in his being stripped of his heavyweight title, banned from boxing and charged with evasion. (Though he avoided jail time, it would be more than three years before he returned to the ring.) Biographer Jonathan Eig says Ali's protest was unprecedented in those days.

"It was unimaginable for most black athletes to stand up that way and say, ... 'I'm going to play by my rules and to criticize presidents and to criticize the war and to call all of white America a fraud,'" Eig says. "That was radical."

I don't think we do Ali any good by treating him as a saint. He was a human being, and he was deeply flawed, but I think the reason people look to him this way is because he had the spirit of a rebel.

Eig says that although Ali was attacked for his political views at the time, attitudes towards the boxer shifted as American support for the war waned.

"To see this guy who goes from being the most hated man in the world to being the most beloved in many ways, to being seen as this kind of saint is fascinating," Eig says. "And I don't think we do Ali any good by treating him as a saint. He was a human being and he was deeply flawed, but I think the reason people look to him this way is because he had the spirit of a rebel. He was willing to fight for what he believed in."

Immediately after the fight [with Sonny Liston], he makes this very bold pronouncement that really shocks everybody: He admits that he's a member of the Nation of Islam and that he's not going to accept this Christianity anymore. This was a slave religion that was forced on him and his people during slavery, and he was free to choose whatever he wanted. 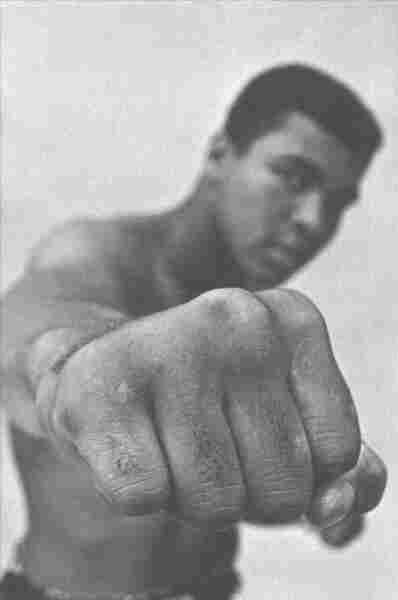 That's really, I think, the defining moment in Ali's career. It's his coming out, and at a time when African-Americans were expected to be subservient in American culture. For him to say, "I can do what I want," was radical.

It was fascinating because he was a brilliant marketing guy. He understood that he was going to get a fight with Sonny Liston sooner than anybody else, before he was really qualified based on his boxing record, because he was making so much noise.

His first nickname was "The Louisville Lip," and it was meant with disdain that he was a bad sport. He was behaving like a child. He was modeling his behavior, in part, on Gorgeous George, the wrestler who came into the ring with his hair in curlers. He was trying to make the crowd angry. ...

He ends up becoming even more hated for more legitimate reasons, and then he becomes the most beloved man in the history of boxing. So that is fascinating to see how well he manipulated that.

On Muhammad Ali's Complicated Contradictions, And How He Changed Boxing

Ali saw one of his great goals in life to be the uplift of African-American people, to bring black pride out, to show people that they could say they were the greatest, even when America said they were second-class citizens. And yet, at the same time, he is undercutting these other strong, proud African-American men and using the most racist images to do so. So that was Ali: There were no easy answers. He was very complicated in these ways, and he didn't really care about the contradictions. ...

He showed more respect for his white opponents. It's almost like it was this line he didn't want to cross, that calling these white opponents names, that belittling them was more complicated for him. It was dangerous. He didn't want to do it. But calling out other black men — some people I talked to said they thought he had his own sense of inferiority.

[Boxer] Joe Frazier was a tough kid who came up out of poverty. [Boxer] George Foreman grew up in the ghetto, dirt poor. Ali was middle class. He didn't fit in with the world of a lot of other boxers. ... Ali wasn't of that demographic, so some people have speculated that he was acting out this way to prove he was as bad and as black as anybody else.

Everybody kind of wondered why Ali had this miraculous ability to dodge a punch, and some doctors I talked to said it might've actually been connected to his dyslexia, that when you're dyslexic your brain works differently. When you learn to read, your brain gets re-wired so that you focus really carefully on one thing, you can concentrate really hard on those letters on the page.

But when you never learn to read, your brain remains more accessible to outside forces. You can maybe hear and understand two conversations at one time, because your brain hasn't been re-wired by the process of learning to read.

Ali, because he learned to read very late and never really very well, may have been better at picking up visual clues than most people. He may have been able to see little signs in his opponent's body that suggested when and where the punch was going to come. It's a fascinating theory, I think.

On Ali's comeback in the 1970s, after being hated and having his heavyweight title stripped because of draft evasion

When he comes back from his exile, first of all, the war is wildly unpopular. And so, when he began his protest, there was still very strong support for the war in Vietnam. But by 1971, people can say, "Wow, Ali was right. That war has been a disaster. No wonder he didn't want to fight over there."

In Political Activism, Ali Pulled No Punches — And Paid A Heavy Price

He also has suffered. He's given up three and a half years of his career and millions of dollars, and then he comes back to the ring and he fights Joe Frazier and he gets whooped. ... This is one of the greatest and most vicious fights in boxing history and Ali loses, but he stays on his feet. He survives this thing. I think then you begin to see him as a martyr, as a hero, and somebody who gets knocked down and keeps coming back.