Accessibility links
Many Americans Side With President Trump On NFL Anthem Protests A research study of more than 400 Americans found that more than 40 percent support the president's criticism of protests by NFL players and coaches during the national anthem. 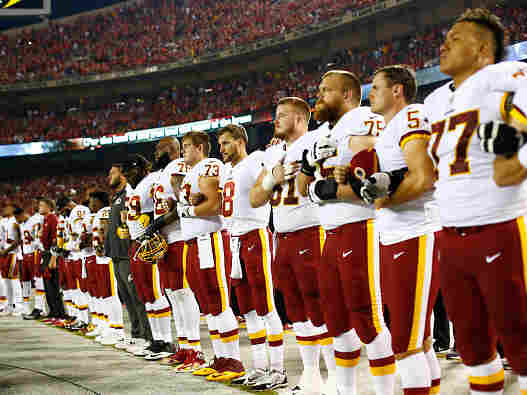 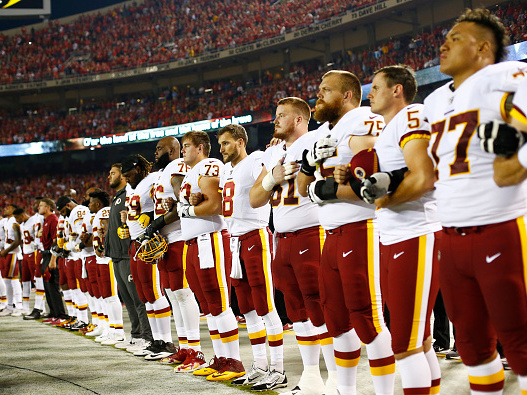 The Washington, D.C., football team stands at attention while linked in arms during the national anthem before Monday night's game against the Kansas City Chiefs at Arrowhead Stadium in Kansas City, Mo.

The political debate surrounding national anthem protests at National Football League games intensified this week after players declined to stand during the playing of "The Star-Spangled Banner" after the mass shootings in Las Vegas.

Before the Monday Night Football game between the NFL franchises in Kansas City and Washington D.C., two Kansas City players sat on the bench during the playing of the anthem, while all of the Washington players stood with their arms locked.

The controversy started last season when former San Francisco 49ers quarterback Colin Kaepernick chose to kneel during the anthem to protest what he described as injustices faced by people of color, particularly at the hands of police officers. Last month, the issue resurfaced with greater urgency when President Trump condemned players who refused to stand for the anthem. He later called for fans to boycott NFL games unless team owners stopped the protests.

"I really think that, when the announcer in the stadium says, 'Rise to honor our veterans,' by no means is [Colin] Kaepernick, or anyone taking a knee, in any way wanting to dishonor the service of police officers, or people who are fighting in our wars," Melvin says, "but it's an injustice that's happening in our streets, it's an inequality, it's things that have been stemmed from slavery and the Constitution and the Declaration of Independence, all of these foundational documents that define our democracy. That's what matters."

But a sizable portion of those surveyed disagree, says Diane Hessan, founder of C-Space, a market research company. Among the 400 voters participating in a study she began last December, more than 40 percent supported the president on the NFL protests.

Hessan tells Young that for many who disapprove of these protests, it comes down to "plain patriotism." She says their views highlight the collision of politics with what many see as the escapism of sports and the cherished ritual of the national anthem.

"One is the ritual of sports and how that's for many people a sacred place where you root for your team; but people of all political persuasions root for their team," Hessan says. "The other ritual, though, is the playing of the national anthem, everyone standing up, and the dignified, expected, comforting routine that that symbolizes."

Hessan says people in her study used words like "despicable" and "a disgrace" to describe the Ravens-Jaguars game in London, where players sat down for the national anthem but stood for "God Save The Queen." She says many decried those actions as making "a mockery of our nation."

Many respondents also cited the hypocrisy of NFL officials who haven't stopped these demonstrations but banned other displays of activism, such as when the Dallas Cowboys wanted to support the Dallas police officers killed in July 2016.

"So the question, really the hypocrisy, is why did [NFL Commissioner] Roger Goodell say it was OK for players to take a knee, but not OK for players to wear a fairly benign decal supporting Dallas police in the aftermath of a shooting last July?" Hessan says.

Lastly, Hessan says many who support Trump on this issue also said they feel liberals celebrate free speech but not when it is conservatives who are speaking. She argues Trump is using the NFL protests to turn the electorate against a group of people perceived as being part of the elite; in this case, football fans versus football players.

"My perspective on this is Trump is dumb like a fox when it comes to this particular issue," Hessan says. "He knows that if he stokes this racist issue — if he stokes anything related to identity politics — that the Democrats will jump onto it, it's almost like a trap, and then all of a sudden, we've got a week of people screaming and yelling about civil rights."