Accessibility links
Sorrow, But Little Appetite For New Laws Among Nevada Gun Enthusiasts Gun tourism is a thriving industry in Las Vegas, the city where a gunman killed more than 50 concertgoers and injured nearly 500 on Sunday. The attack is spurring calls for new gun control measures. 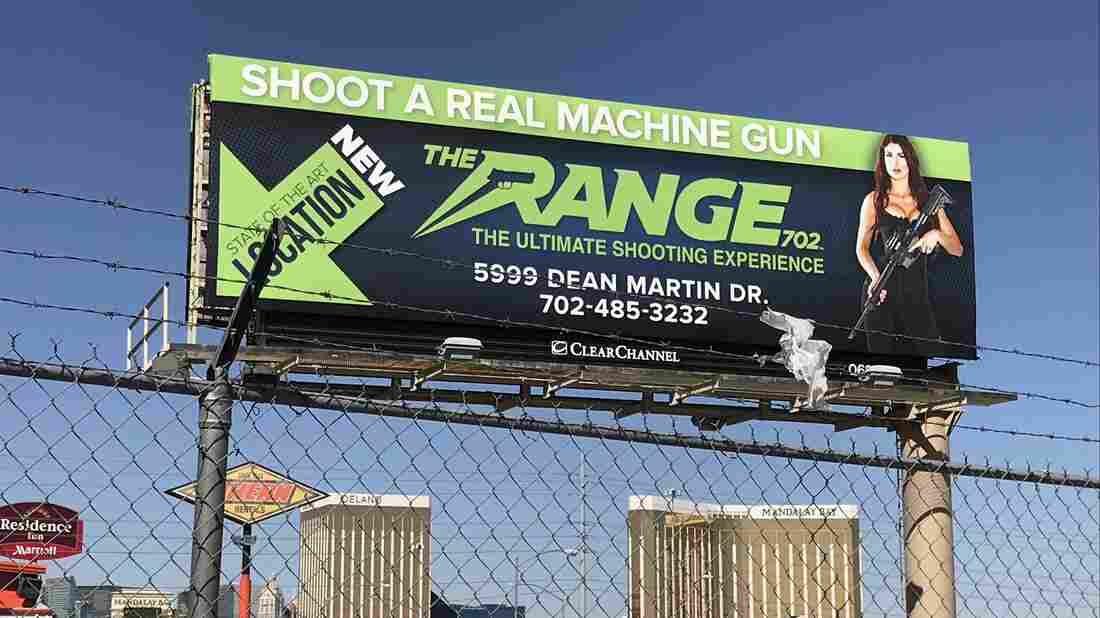 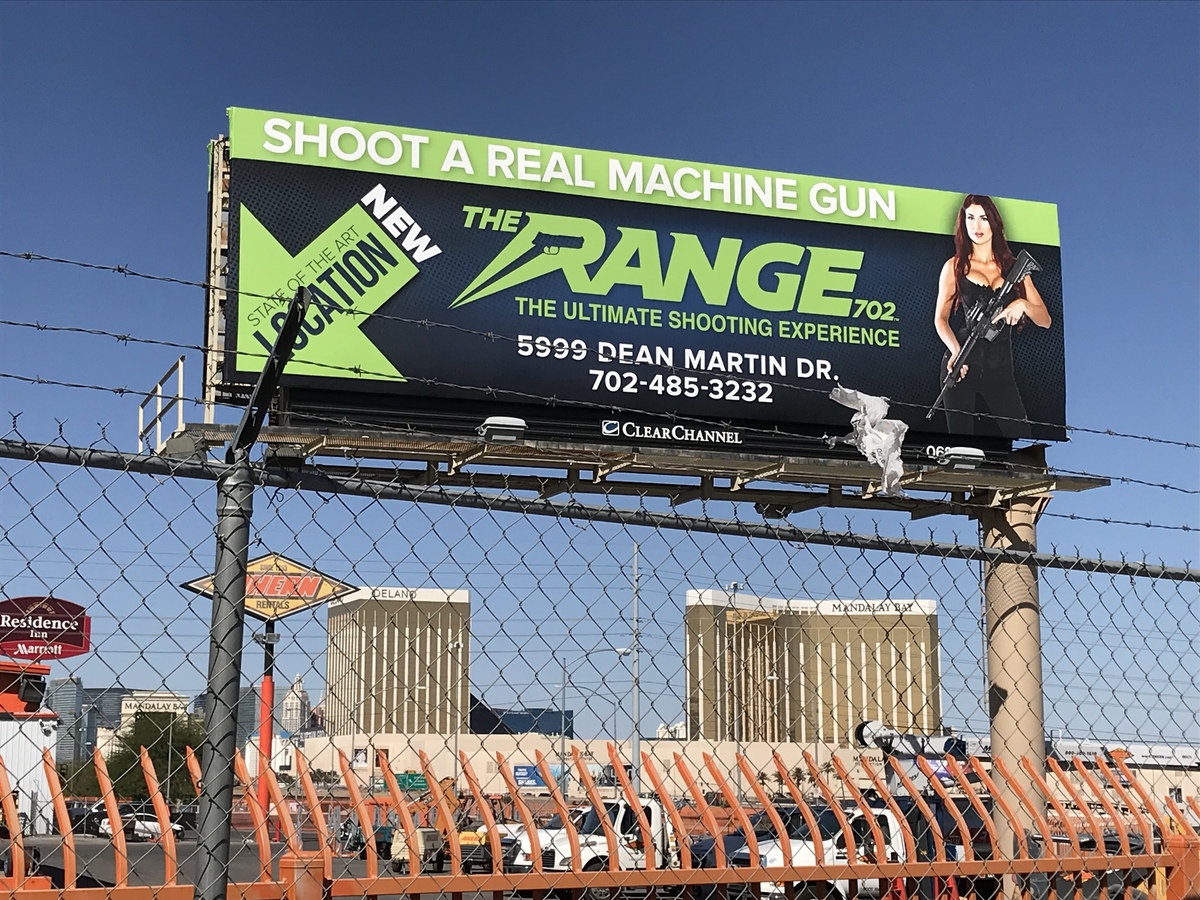 A billboard advertising a gun tourism business in Las Vegas hovers above the Mandalay Bay Hotel, site of a mass shooting Sunday night that killed 58 people and injured nearly 500.

Just off the Las Vegas Strip, there's a big white building in a run-of-the-mill office complex where tourists can pay as little as $50 to shoot 25 rounds from an AK-47. A billboard out front with a busty woman wielding a machine gun advertises the "ultimate shooting experience."

From the parking lot, you can see the Mandalay Bay. That's the hotel where 58 people were killed and nearly 500 were wounded on Sunday night during a country music festival.

Range 702 is one of nearly a dozen shooting ranges doing business along Las Vegas Boulevard. Las Vegas, and Nevada as a whole, are known for gun-friendly culture and comparatively lax laws.

With Las Vegas now also home to the deadliest mass shooting in U.S. history, some say lawmakers need to do more to beef up gun control regulations.

At a hastily organized prayer service at Christ Church Episcopal, Dan Edwards, the Episcopal Bishop of Nevada, opened his sermon by calling people to action.

"What is the purpose of 100 round magazine clips, semi-automatic weapons and bump stocks that make a rifle shoot like a machine gun?" he asked. "We saw the purpose this weekend."

But many gun owners don't see new regulations as the right reaction.

One gun owner NPR spoke with said he'd be open to policy changes in light of Sunday's massacre — but only with clear evidence that those changes would have prevented the attack.

He asked us not to use his name, to keep his family and the gun club where he's one of 3,500 members from getting dragged into the headlines. NPR was turned away from all the shooting ranges or clubs where we asked to talk to people about what happened Sunday in Las Vegas.

This particular gun owner is a member of a private gun club in town. He says it's not unusual in Nevada for hunters to own many types of guns. He has many of his own.

But 23 guns in a hotel room on the Strip?

"It'd crazy for there to be one in the hotel room," he said. "None of this makes sense to any of us."

He says there should be consequences for people who are negligent in their responsibilities as firearms owners, but thinks it's unfair to punish them all for the actions of a small number of attackers.

"Was this an awful event? Yes it was. It was. And I can assure you that gun owners are just as upset if not more upset than the general public," he said. "It reflects poorly on something we find enjoyable."

He says he doesn't have any answers to the problem, but says he's willing to engage in dialogue with anyone who thinks they do.

How A Bump Stock Device Can Alter Guns

How A Bump Stock Device Can Alter Guns

The news that 12 of the guns recovered from the attack had been fitted with bump stocks — a device that uses a semiautomatic rifle's recoil to boost the gun's firing rate to near-automatic — broke after we finished talking.

"Given the circumstances," the gun club member wrote in a text message, "making those devices illegal would be logical and reasonable as part of future proposed legislation."

Don Turner, president of the Nevada Firearms Coalition — the state association for the NRA, representing gun owners, users and clubs — says such a law wouldn't have stopped Sunday's shooter or limited his effectiveness.

"Putting more new laws on the book not going to stop it," he said. "It's just feel-good stuff. If we're going to do anything sufficient or effective, it's got to be more related. I would say probably more mental health examinations and services would probably be more effective in saving lives than worrying about piece of plastic that would or would not go on a gun."