Accessibility links
Deadline Looms For Thousands Of DREAMers Across the country, so-called DREAMers have been scrambling to renew their DACA benefits for the last time before the Trump Administration begins phasing out the program in March. 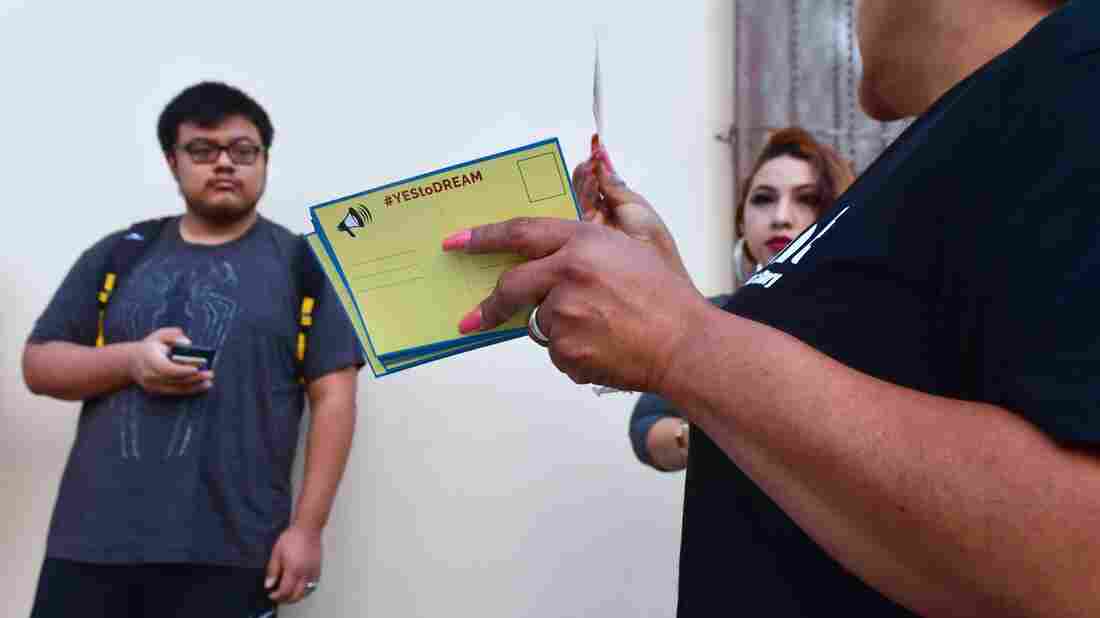 Volunteers offer cards to be filled out and sent to members of the House of Representatives as Deferred Action for Childhood Arrivals (DACA) recipients wait in line at the Coalition for Humane Immigrant Rights (CHIRLA) office in Los Angeles on September 30, 2017. Frederic J. Brown /AFP/Getty Images hide caption 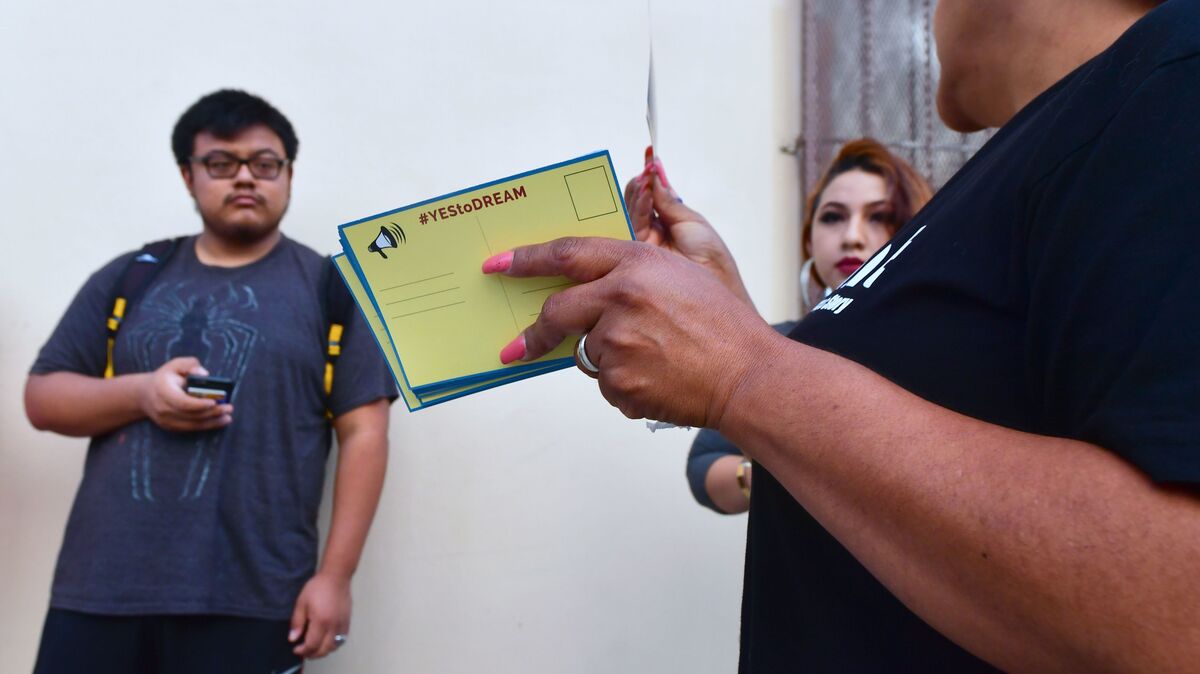 Volunteers offer cards to be filled out and sent to members of the House of Representatives as Deferred Action for Childhood Arrivals (DACA) recipients wait in line at the Coalition for Humane Immigrant Rights (CHIRLA) office in Los Angeles on September 30, 2017.

The clock is winding down for thousands of immigrants who were brought to the U.S. illegally as children.

The Trump administration has stopped accepting new applications for the program known as DACA, or Deferred Action for Childhood Arrivals, that protects nearly 700,000 so-called DREAMers from deportation. Thursday is the deadline for thousands of current DACA recipients to renew their status for what could be the last time.

That's touched off a scramble across the country. The Department of Homeland Security says more than 100,000 DACA recipients have applied to renew their temporary, two-year work permits ahead of the deadline.

DACA, A Student's Story: 'They Are The Types Of Immigrants You Want In Your Country'

Many have gotten help from pop-up legal clinics across the country, including a series of recent events hosted by the City University of New York. In a classroom in midtown Manhattan, lawyers from CUNY's Citizenship Now! project and volunteers from the local legal community helped DACA recipients fill out their renewal applications. After they finished the applications, representatives from a local nonprofit called the New Economy Project were waiting to cut checks covering the $495 application fee. 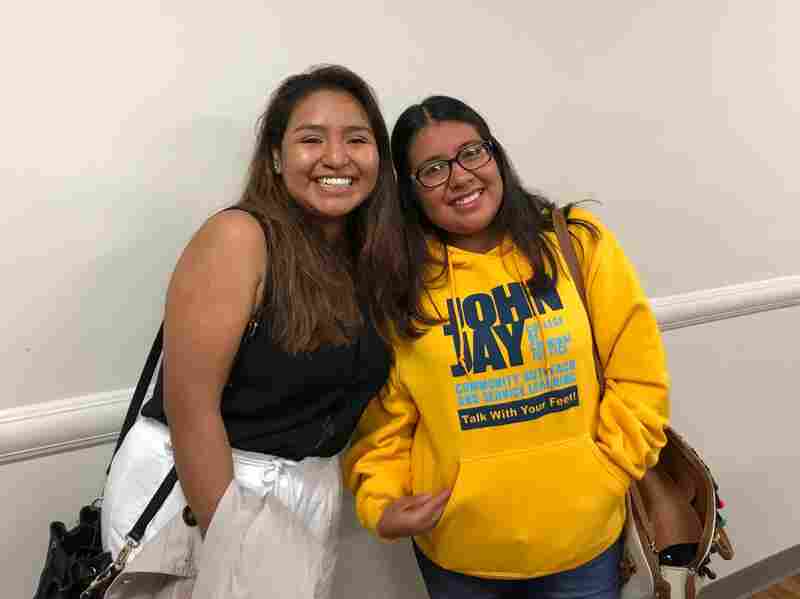 Jenifer Guzman, left, and Paola Ponce are both DACA recipients. Guzman is a junior at Hunter College, Ponce is a junior at John Jay College of Criminal Justice. Joel Rose/NPR hide caption 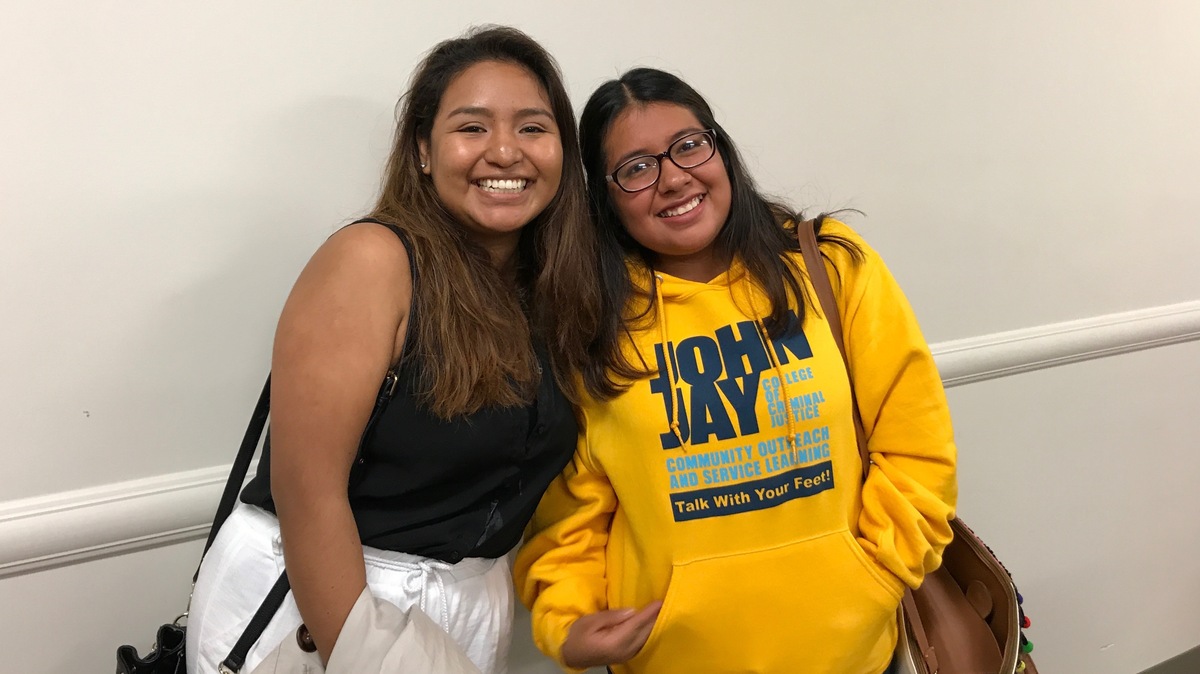 Jenifer Guzman, left, and Paola Ponce are both DACA recipients. Guzman is a junior at Hunter College, Ponce is a junior at John Jay College of Criminal Justice.

That was big relief for Achraf Jellal, who first signed up for DACA in 2013.

"It gave me the ability to work, go to school, drive," Jellal said. "It's basically everything. Without it, I don't know what I would have done."

Jellal moved to New York when he was 4 with his parents, who are Moroccan. He's studying computer science at CUNY's LaGuardia Community College in Queens, where he lives. But Jellal knows that without DACA, he might have to leave the U.S. to work in his field.

"I can definitely work back in Morocco with an American degree in computer science," Jellal said. "But I've never been there. I don't know any of my family, actually."

DACA protections will begin expiring in March — unless Congress reaches an agreement to extend them.

"It would be a terribly sad thing for these people, who are making so much progress in their careers, in their lives," said Allan Wernick, director of CUNY Citizenship Now! project. "So I don't see it happening, because I think that political pressure and the political support for these DACA people is going to protect them."

There's bipartisan support for extending protections for DREAMers. But there are some sticking points, as well. One is that immigration hardliners say any deal has to include some funding for President Trump's border wall.

Republican Senator Chuck Grassley of Iowa thinks there's room for compromise on that. "Any potential DACA agreement has to include robust border security," Grassley said Tuesday at a hearing of the Senate Judiciary Committee. "And by that, I don't mean a wall."

But immigrant rights advocates, and some Democrats, want to see new protections for DREAMers without extra border spending or other conditions attached.

While all this plays out in Washington, Jenifer Guzman is just trying to get through college. She's a junior from Sunset Park, Brooklyn who's studying psychology and political science at CUNY's Hunter College in Manhattan.

"My main goal is graduating on time," Guzman said, "because education is something no one can take from me. That's my plan for now. I don't know what comes after that."

What Guzman does know is that her DACA benefits will expire in summer of 2019 — just a few weeks after she's scheduled to graduate.