Accessibility links
'Unkindness Of Ghosts' Transposes The Plantation's Cruelty To The Stars Rivers Solomon's novel is set on a giant generation ship, on an interstellar voyage of centuries, divided between the wealthy, light-skinned upper-deckers and the oppressed, laboring lower-deckers. 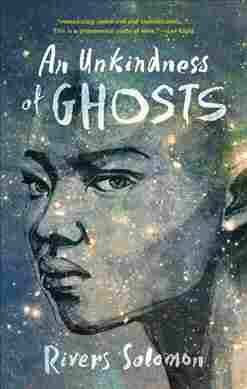 An Unkindness of Ghosts

Rivers Solomon's An Unkindness of Ghosts is the kind of novel I need to describe in terms of what it did to me. Reading it, I felt it carving out a vastness inside me, pouring itself into me like so many stars, and the more I read the bigger I felt, falling down a rabbit-hole of sky and wanting only to go deeper and farther with every page.

Aster lives on a generation ship called Matilda, organized much like an antebellum plantation in space: The black and brown people on the lower decks, tightly policed by vicious guards and overseers, do the hard labor that enables the white people in the upper decks to hoard wealth, heat, and comfort. The upperdeckers also hoard religion; their Sovereignty, a sort of limited constitutional monarchy, claims that every sin committed by lowdeckers widens the gulf between Matilda and the Promised Land they've been in search of for 325 years.

Orphaned as an infant by her mother's suicide, neuroatypical, and ambiguously gendered among those who hold to rigid binaries, Aster is an outsider to most of her social groups: Her bunkmates mock her and her fellow lowdeckers are confused by her. In spite of her differences, she's respected for the extensive medical knowledge she's gleaned from her dead mother's journals, and for her curious friendship with an upperdecker who's almost as much of an anomaly as she is: Theo, the Surgeon General, a light-skinned bastard son of the former Sovereign. With his support, and using the resources of a secret greenhouse she calls her botanarium, Aster navigates Matilda's horrors to bring succour and healing where she can.

But there's something wrong with Matilda's power source — something connected to the current ailing Sovereign, and more importantly, to Aster's lost mother, Lune. With her sometimes-friend, sometimes-antagonist Giselle's help, Aster begins decoding Lune's journals to trace the mystery of her mother's death and the secrets at Matilda's heart.

To name a thing Solomon does in this book is to praise it. I loved the way each deck had its own dialect, how lowdeckers explored those differences with each other and learned each other's languages. I loved the attention to gender variance, to queerness, and the rooting of rigidity around gender in the ruling class' obsession with policing black bodies. I loved the exploration, in several heartbreaking scenes, of how enslavement breeds cruelty along an intersecting circuitry of lines among lowdeckers, as everyone tries their best to survive. I loved the clarity and precision of the prose, which felt like drinking cool water on an empty stomach, like being limned in light on the inside. Most of all, though, I loved Aster's voice, Aster's perspective on the world, Aster's anger and her fierce, unrelenting kindness to those she loves, no matter how they hurt her.

When I finished An Unkindness of Ghosts and put it down, I almost immediately picked it up again to re-read from the beginning, to admire how early certain seeds were sown, how thoroughly integrated were its plantation roots into space-faring soil. This book is not an allegory for life on plantations: it's a transposition, and through it an interrogation, an investigation, of the falsehoods and broken memories of a nightmare past. It drags up pervasive stereotypes of happy mammies and consenting love between slaver and enslaved and vivisects them, the dextrous voices of characters like Aint Melusine and Giselle deployed like scalpels to part the inflamed skin of bad history.

I sometimes hated an overseer so much that I had to put the book down to imagine all the ways in which I wanted him to die. I picked it up again to see Aster and Giselle imagining the same things.

What Solomon achieves with this debut — the sharpness, the depth, the precision — puts me in mind of a syringe full of stars. I want to say about this book, its only imperfection is that it ended. But that might give the wrong impression: that it is a happy book, a book that makes a body feel good. It is not a happy book. I love it like I love food, I love it for what it did to me, I love it for having made me feel stronger and more sure in a nightmare world, but it is not a happy book. It is an antidote to poison. It is inoculation against pervasive, enduring disease. Like a vaccine, it is briefly painful, leaves a lingering soreness, but armors you from the inside out.