Accessibility links
Not My Job: We Quiz Conan Sidekick Andy Richter On 'Conan The Destroyer' Conan O'Brien's longtime announcer gets to answer questions about the less-successful sequel to the Arnold Schwarzenegger vehicle Conan The Barbarian. 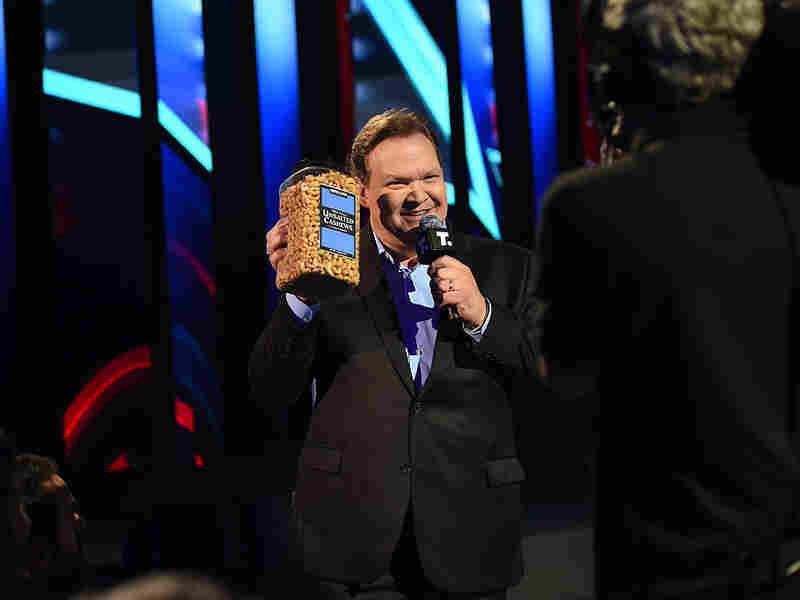 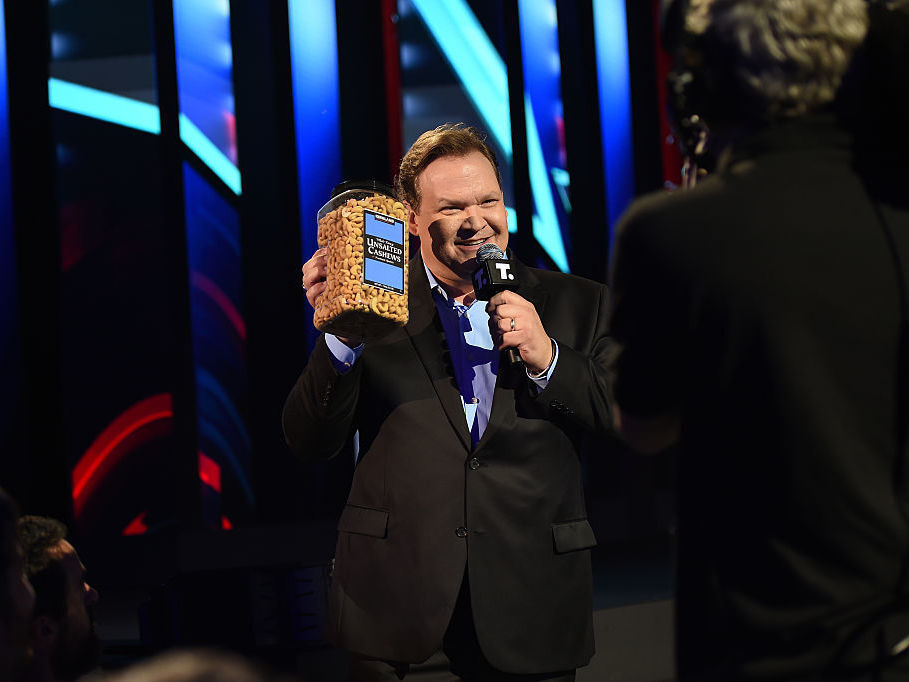 As the legend goes, Andy Richter met a guy at a party who was producing a late-night show starring then-unknown Conan O'Brien. The two men seemed to get along really well, so why not put Richter on set as a sidekick? And thus he became the Ed McMahon of a generation too young to know who Ed McMahon is.

Since he's worked with Conan O'Brien for decades, we gave him a game about Conan The Destroyer – 1984's less-successful sequel to the Arnold Schwarzenegger vehicle Conan The Barbarian.

And now the game where household names come on to talk about things no one has ever heard of. It's called Not My Job. As the legend goes, Andy Richter met a guy at a party in New York who was producing a late-night show starring the then-unknown Conan O'Brien. Well, Andy and Conan seemed to get along, so why not put Andy on the set with them? And thus, Andy Richter became the Ed McMahon for a generation too young to know who Ed McMahon was.

SAGAL: So first of all, is that story true? - that that's basically what happened, is that someone said hey, come and work on this show? Hey, you and Conan like each other. Get on stage with him.

RICHTER: It was, but it was actually in Los Angeles because I was in Los Angeles. I had done the movie "Cabin Boy". I had already been in a major motion picture.

RICHTER: ...That was going to be my big break.

SAGAL: When you were on the set of "Cabin Boy" starring Chris Elliott, were you actually thinking to yourself, this is going to make me?

RICHTER: (Laughter) I don't know if I was thinking it was going to make me, but I was actually getting paid real money.

RICHTER: Yeah. And I had moved down to Los Angeles. I thought, this is my nest egg. And it turned out to be like a hummingbird egg.

SAGAL: So once you joined the "Conan" show, I mean, this was when Conan was starting. He had never performed. He had been a writer for "The Simpsons." And what was that like, when you and Robert Smigel and all the guys on the show were, like, creating the show out of nothing? Did you have like a mission statement? Were you like, we'll do whatever we can until they take us off the air?

RICHTER: Sort of. It's like any time you're in over your head. You just act like you know what you're doing and hope they don't throw you out. And that's pretty much what we did. And they tried to throw us out a few times actually.

SAGAL: I have to ask you - because you are now, as I said - and I know you're compared him all the time - sort of the Ed McMahon, the great sidekick...

SAGAL: ...The guy who's there with the other guy. Is there a secret to doing that?

RICHTER: I think the main thing is just to have a slightly smaller ego than the host.

SAGAL: It doesn't matter how big it is as long as it's smaller.

RICHTER: Yeah. Yeah. I have a ferocious ego.

RICHTER: I think I am the greatest thing on earth. But Conan thinks he's better than me.

SAGAL: ...To strike out on your own because you were a pretty big star and you made your own TV shows, like, "Andy Richter Saves The Universe," right?

RICHTER: Yeah. Yeah. No, listen that - you know it's a bad title when no one can remember what it is. So...

RICHTER: If I had to do it over again - they wanted - I didn't want my name in the title because I didn't want that much exposure. You know, I like the check, but I don't like the attention.

RICHTER: But they wanted my name in the title, and so that was what we came up with. And it was very unwieldy.

RICHTER: Not the show - the show was great. I loved that show. But...

SAGAL: So what you had the reputation is like too good - you were ahead of your time. You were too good for the room.

RICHTER: Imagine your frustration when you went to see it and it wasn't there. Imagine my frustration.

RICHTER: I wanted to be in it again, and then they took it away from me.

SAGAL: Yeah. How does that happen, by the way, when a network cancels your TV show after six episodes or whatever it was?

RICHTER: There's no - I've experienced different ways to have my hopes and dreams crushed.

RICHTER: No, sometimes you get - you know, it's the agent or manager that will call you and let you down. I have had - you know, I have had some network people do me the courtesy of speaking to me directly, which didn't even really help that much. It's kind of even more infuriating because, you know, they're basically, as they're cutting your throat saying, like, I don't want to do this.

HONG: It's very "Game Of Thrones."

RICHTER: That would be hard.

RICHTER: Would be difficult.

SAGAL: So you eventually went back, and you're still with Conan now on TBS. Is it easier the second time through? - where you're, like, oh, I'm home again. This is where I belong.

RICHTER: Oh, yeah. Definitely. But, you know, if you do something for over 20 years, it ought to get easier. Or else you need therapy or something.

HONG: Do you ever say something and Conan just looks and goes, that was stupid?

RICHTER: No because, I mean, come on. I'm like the goose that lays golden eggs.

SAGAL: Because you're very affable, does he ever say something and you just don't laugh, and he looks at you, like, what's wrong, man?

SAGAL: Yeah, I know. Hey, when you're onset with Conan, you're really a couple.

SAGAL: I mean, you've been a couple for a long time.

RICHTER: Well, you've got them - the genders mixed there.

RICHTER: That would - it would go to the - it would be her not laughing at me.

RICHTER: That would be much more likely. No, I would say Conan and I are very much, like, have a relationship of brothers. We have a lot of fun together. And we - but then I'm sure - we get on each other's nerves quite frequently. But we know how to navigate it. I mean, it is - it's a - it is a very long, ongoing relationship.

SAGAL: What does that - like, you mean one of you would bail out the other?

RICHTER: (Laughter) You know, what? He is so incredibly squeaky clean that I would never even - like, if he dropped a gum wrapper, he would probably have a panic attack if he didn't go back and pick it up. So...

RICHTER: So I wouldn't worry about that. And as far as him needing to bail me out, I'm too smart to get caught.

SAGAL: Well, Andy Richter, we're delighted to talk to you. And this time we've asked you here to play a game we're calling...

SAGAL: Yeah. Answer two out of three questions about this terrible sequel to "Conan The Barbarian," and you'll win our prize for one of our listeners, Carl's voice on their voicemail.

Bill, who is Andy Richter playing for?

SAGAL: All right. Now, "Conan The Barbarian," the original movie from 1982, was a modest hit. But the director of the sequel, Richard Fleischer, wanted to make his sequel much more successful. So he decided to make sure of what? Was it A, that the dialogue was written in iambic pentameter for, quote, "class"'; B, that the actors never washed during the shoot so they would truly feel like barbarians; or C, that star Arnold Schwarzenegger should be quote, "undressed 99 percent of the time," unquote?

RICHTER: This is so easy.

RICHTER: I mean, it's obviously - if you have a Schwarzenegger, you keep him undressed.

SAGAL: Yeah. If you enjoy beefcake, "Conan The Destroyer" is a two-hour buffet, ladies and gentlemen.

SAGAL: All right. I think you're going to do well with us, but here we go. "Conan The Destroyer" has a secure place in film history. Why? A, it includes basketball star Wilt Chamberlain in his only acting role; B, it is the only movie since the silent era in which a lead actor, Arnold Schwarzenegger, never says a word; or C, it introduced the modern formula for fake blood, which is corn syrup and cherry Jell-O?

RICHTER: It was the first one.

SAGAL: It was. It was Wilt Chamberlain.

RICHTER: It was Wilt Chamberlain's only - he plays...

RICHTER: He's one of Conan's pals.

SAGAL: Yeah, he is. He plays one of Conan's pals. He's very tall. And he, as an actor, was a fantastic basketball player.

SAGAL: OK, last question - co-star Grace Jones got the part of the movie through a strange quirk of fate. What was it? A, her character, Zula, was written as a man but producers thought the name sounded female, so they cast a woman by mistake; B, the director said get me Shirley Jones, you know, from "The Partridge Family"...

SAGAL: ...But an assistant misunderstood and brought in Grace Jones; or C, the casting director made a bet that she could get Grace Jones cast in a movie by the end of the year and it was December?

RICHTER: I am going to guess it was the first one.

SAGAL: This is true.

SAGAL: By the time the mistake was discovered, Grace Jones had already signed a contract to play him. So...

RICHTER: And I - also, too, once they made the decision to keep Arnold undressed...

RICHTER: ...They really didn't pay close attention to all the other details.

SAGAL: Bill, how did Andy Richter do on our quiz?

KURTIS: Well, you know, Andy is very smart, so he got all three right.

RICHTER: Thank you. Well, I got to hear that Bill Kurtis thinks I'm smart.

SAGAL: He does. Andy Richter is a writer, actor and longtime sidekick on the Conan O'Brien shows. If you're in Chicago on Saturday night, he'll be at the Apollo Theater for a taping of the Crybabies podcast hosted by his wife, Sarah Thyre. Andy Richter, thank you so much for being with us. What a pleasure to talk to you.

RICHTER: You are welcome. Thank you.

SAGAL: In just a minute, Bill ruins your salad in the Listener Limerick Challenge. Call 1-888-WAITWAIT to join us on the air. We'll be back in a minute with more of WAIT WAIT... DON'T TELL ME from NPR.