Accessibility links
'Taste Of Empire' Shows Us The World In Our Kitchen Cupboards Lizzie Collingham's new book takes 20 exemplary British meals, from plain stewed beef to an elaborate Christmas pudding, and uses them to illustrate the way food and empire are inextricably linked.

'Taste Of Empire' Shows Us The World In Our Kitchen Cupboards

'Taste Of Empire' Shows Us The World In Our Kitchen Cupboards 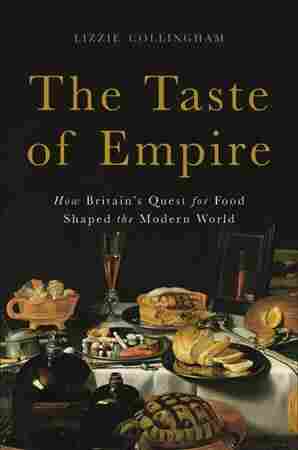 The Taste of Empire

How Britain's Quest for Food Shaped the Modern World

"To be a Victorian Englishman was to possess the power to eat the world."

One afternoon in 1748, the Latham family sat down to dinner. They ran a small farm in Lancashire, and their menu was satisfying — beef and vegetable stew, beer, doughy fruit pudding. They grew wheat and barley to make bread, their cows supplied them with milk and cheese, and from their crops (and the women's cotton textile work) they made enough profit to buy beef.

Of the 20 meals outlined in Lizzie Collingham's The Taste of Empire, this is the one that seems, on the surface, free of empire. Of course, it isn't. The Lathams' cotton was part of an economic quagmire that spanned three continents; their land was an exception to the English gentry's habit of enclosing common hunting and grazing land. But this ideal of bucolic self-sufficiency sparked an insatiable appetite, and The Taste of Empire traces the English (later, British) history of trying to remake the world in this image — at any cost.

The book maneuvers as deftly as possible through this densely interconnected subject. Sorting chapters by meals allows for a certain focus, though it's still such a vast topic that every so often the scope is overwhelming. (After a few passages tracing trading routes that were "swapping Malabar pepper for cowrie shells in the Maldives and using those to buy rice in Burma to take to Malabar, where the harvest was small," it might be worth cross-referencing a little.)

But even when it's imposing, it's absorbing. This is, at heart, a story about how, "having eradicated the peasantry at home, Britain had acquired an enormous peasantry abroad." Empire is a beast that grows as it feeds, whether it's the desire to remake England or merely to make an English profit. Proto-industrial factories in Newfoundland dried salt cod for sailors on increasing numbers of overseas voyages; canning developed to create exports between British colonies. It's a feedback loop on a staggering scale.

And though the book's more concerned with the past than the present, that loop has timely echoes. Among other things, as scientists worry we'll fish the ocean dry within a generation, it's striking to imagine that only three centuries ago, the Newfoundland shore was so teeming with cod sailors were "hardlie ... able to row a Boate through them." (The cost of empire is apparently perpetual.)

There's a certain academic remove that can make Collingham's discussion of particularly unsavory aspects (violence against Native nations and African slaves in particular) seem a little distant. Generally, the she's more concerned with specifics than implications, and that distance becomes more obvious in passages about, say, the agricultural economics of the slave trade in Senegambia. But The Taste of Empire is so direct about the impact of colonialism that the overall effect of the tone is that Collingham is simply assuming a sympathetic reader — for her, just describing the spread of expedient crops at the cost of culinary identity, or the British ration that replaced sovereign agriculture in Australia, is enough.

... the book is fascinating reading, and its central point is more than clear: Britain's many hungers shrank the world in ways that are still nearly impossible to untangle.

And even with that careful measure, the book is fascinating reading, and its central point is more than clear: Britain's many hungers shrank the world in ways that are still nearly impossible to untangle. The "[British] right to consume" speaks for itself, with food as a symptom of the need to constantly define who was part of the Empire, and who was a product of it. (Perhaps the book's most telling recipe — out of some real gems — comes from a 1926 newsreel in which a "traditional" British Christmas pudding is made with ingredients from a dozen nations.)

It's a world the size of which the Lathams could never imagine, but that's part of the point: The Taste of Empire knows how invisible an empire is from the inside. (Chances are, after this, you'll never look at your grocery list the same way.) Whether you're a foodie or a history buff, this should be a satisfying read; sometimes the best way to history's heart is through its stomach.