Accessibility links
'Her Body And Other Parties' Is An Abrupt, Original And Wild Collection Carmen Maria Machado's new collection takes young female online culture — LiveJournal and Tumblr, ghost stories and urban legends — and reinforce the uncanny power and reach of those stories. 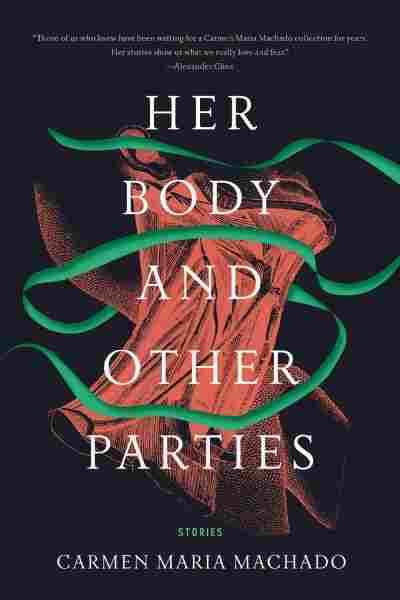 Her Body and Other Parties

"What's worse, writing a trope or being one?" the narrator of Carmen Maria Machado's story "The Resident," asks. She is at an artists' colony, and one of the other residents — a "poet-composer" named Lydia — has snidely announced that the narrator's autobiographical writing plays into the madwoman in the attic stereotype, not to mention the crazy lesbian stereotype. "It's sort of tiresome and regressive and, well, done," says Lydia.

Later, the narrator, whose initials are also CM, carves the words "Madwoman in her own attic" into the wood of her writing cabin.

Her Body and Other Parties — just announced as a finalist for the National Book Award — is an abrupt, original, and wild collection of stories, full of outlandish myths that somehow catch at familiar, unspoken truths about being women in the world that more straightforward or realist writing wouldn't. Machado's stories feature a woman who can hear the thoughts of actors in porn videos, a list of sexual partners that slowly resolves into a story about a national epidemic destroying the country, a woman who realizes ghost women are sewn into the seams of dresses at the boutique where she works, and a woman who had a gastric bypass and is haunted by the parts she shed.

Though Machado has obviously been influenced by the reworked fairy tales of Angela Carter, she seems to draw on a different canon, namely that mix of urban legend and erotica that flourished in women's online writing (LiveJournal, Tumblr) a decade ago and rarely gets fancy literary attention. Instead of fairy tales, she enshrines a particular kind of young female culture — ghost stories, girl scout camp stories, urban legends, including that one myth about the girl with the ribbon around her neck that haunted my sleepovers from ages 10 to 15 — but in a way that reinforces the sincere uncanny power and reach of those stories, which as we grow up we lose sight of and eventually replace with more socially acceptable stories.

The longest story is called "Especially Heinous" and is a series of short, increasingly absurd summaries of fake Law & Order: SVU episodes. For instance, "Sophomore Jinx: The second time the basketball team covers up a murder, the coach decides he's finally had enough." Or "Stocks and Bondage: Benson takes the bag of rotten vegetables out of the trunk when Stabler isn't looking. She throws it into a garbage can and it hits the empty bottom, wet and heavy. It splits open like a body that's been in the Hudson." Meanwhile, Benson and Stabler are pursued by shadowy dopplegangers called Henson and Abler.

Though it doesn't have the narrative energy of the other stories, "Especially Heinous" does create a slight estrangement from our culture that allows us to see that culture afresh, and be reminded of the kinds of questions that trip up the brain of any reasonable person: Why do we watch shows about women being raped and killed? Because women are raped and killed. Why are women raped and killed? That's where the brain sticks. If Machado's heroines are madwomen, it's because they come up against questions like these, and don't so much go off a cliff as realize that living in this world requires dissociation, fantasy, and extreme psychological measures.

Lydia's implicit question in the title story is, doesn't writing about women's preoccupation with their bodies somehow devalue them? Machado seems to answer: The world makes madwomen, and the least you can do is make sure the attic is your own.