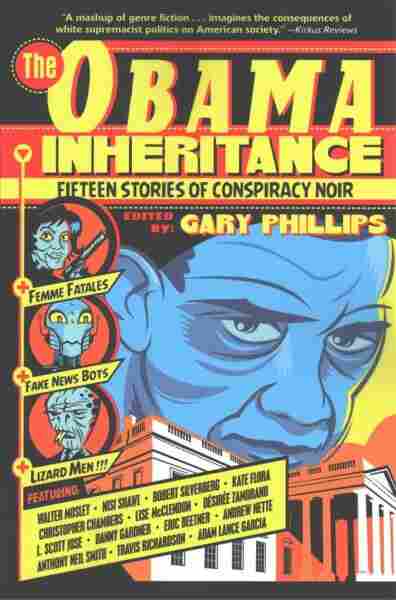 It's a commonplace these days to say that real life has become so unpredictable that it outstrips anything anyone could dream up in fiction. I think I'm guilty of having made that banal observation a few times.

But that was before I read The Obama Inheritance, a collection of 15 stories so sly, fresh and Bizarro World witty, they reaffirm the resiliency of the artistic imagination.

As editor Gary Phillips explains in his foreword, the idea for The Obama Inheritance was "a cumulative thing" born out of the fact there were so many conspiracy theories generated about President Obama. There were the "birther" stories, the suggestion that President Obama used secret weather machines to create Hurricane Sandy, and on and on.

Phillips says, "To many of us, the daily roll out of these preposterous notions about the nation's first black president was laughable." The "us" Phillips refers to are a diverse group of writers in terms of race and reputation; they're practitioners of a variety of genres: noir, sci-fi and fantasy.

Phillips, who has written some terrific hard-boiled mysteries himself, invited each of these contributors to chose one Obama conspiracy theory and "[r]iff on it, take it apart and turn it on its head, and give the reader a thrill ride of weirdo, noirish, pulpy goodness."

The overarching aim of all this outlandishness is to entertain, as well as to tuck some social criticism into the formulaic folds of these tales of spooks, spies, private eyes, clones, bots and alien invaders.

A truly fabulous story kicks off this collection. Remember all those loud whispers, sparked by a fist bump, that Michelle Obama was a covert black power separatist? In "Michelle in Hot Water," crime writer Kate Flora takes that conspiracy fantasy about the first lady and runs with it. Here's how the story opens:

The big man with the Russian accent wore an expression somewhere between a smirk and a smile. Not a pleasant smile, but the smile of someone who likes to inflict pain and was about to do just that . ... Michelle wasn't afraid of him; bullies had been common in the part of Chicago where she grew up. Her years in the White House had shown her plenty more, even if they did hide behind expensive suits and artificial courtesies. No. ... What scared her was the predicament she had gotten herself into and the trouble it was going to cause for her team: Faiza from State, Leela from the Surgeon General's office, Charisa from the Pentagon, Lourdes from the FDA, and Alice from Justice.

Michelle, dressed in full combat gear and a Mission Impossible-worthy disguise of fake skin, has gotten caught by that Russian enforcer in the middle of a vigilante mission. It seems as though she and her team of high-level government gal pals have banded together — under cover of being in a women's book group — to pressure pharmaceutical kingpins to lower the cost of cancer fighting drugs for kids.

When, as always, the drugmakers initially refuse, first lady Michelle and her sister Amazons devise ways to inject these fat cats with a drug that temporarily renders them impotent, incontinent and bald. Part of the fun of this story is the repartee that Flora conjures up between Michelle and Barack. Like FDR, Barack realizes that his wayward activist wife can't be reined in.

Another standout is mystery grand master Walter Mosley's complex tale called "A Different Frame of Reference," which takes so-called birtherism to its logical alien end point. Think of President Obama as the brother from another planet.

In recent years, writers of color have taken up sci-fi and fantasy in particular as richly poetic vehicles to explore racism and imagine alternative worlds. The pulp stories in The Obama Inheritance — sci-fi, fantasy and noir — are fun to read, and be forewarned: Many of them also pack a punch.