Accessibility links
'Rules Of Magic' Blends The Charm Of The Familiar With New Enchantments Alice Hoffman returns to the world of her best-selling Practical Magic in this new book, a prequel dedicated to the early lives and loves of the first volume's elderly aunts Francis and Jet. 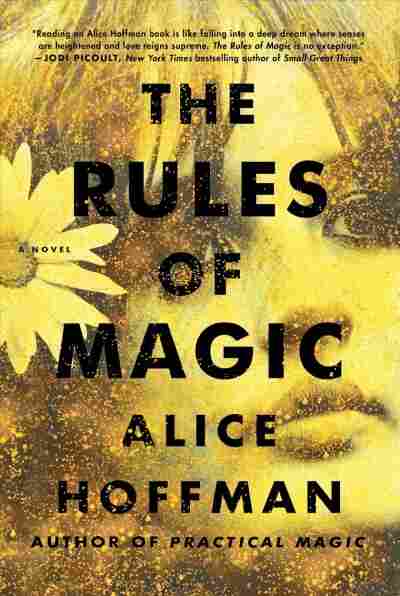 The Rules of Magic

I saw Practical Magic the film when I was 14, a little while before I read Practical Magic the book. I loved both, talked passionately about how very different they were from each other, how glad I was that I'd seen the film first so as to appreciate it on its own terms. The film gave me women loving and fighting with and for each other, in a house and garden (and kitchen) to spend the rest of my life lusting after; the book gave me poetry, the names of flowers, and generations of Owens sisters. The book focuses on Sally and Gillian as adult sisters, and on Antonia and Kylie, Sally's teenage daughters – but I always loved best the elderly aunts, Francis and Jet. I loved their comfort with each other, their confidence with magic, their authority, their power. I wanted to be them, and I wanted their stories.

I was over the moon, then, to learn that The Rules of Magic is a prequel starring the aunts and their brother Vincent, set mostly during their youth in New York City during the 1960s.

The Owens women have always had grey eyes, a spark of magic, and bad luck in love. Legend has it that their ancestor, Maria Owens, abandoned by her lover and accused of witchcraft during the Salem trials, cursed her bloodline to prevent her daughters suffering as she did. But Maria's journal also urges her descendants to "fall in love whenever you can," and the contradiction between curse and command is at the heart of Francis, Jet, and Vincent's lives. Coming of age on the Upper East Side with fashionable parents suspicious of the extraordinary, they explore and develop their powers together in secret — all the while resisting, and failing to resist, falling in love, with catastrophic consequences.

I started reading The Rules of Magic in the afternoon and didn't stop until 2:00 AM. It's not a thriller by any means, not what I'd call a page-turner — there was no urgency to my reading, no skipping along sentences in order to find out what happens. Instead, reading it was like being caught in a current, floating along with a river's twists and turns, glimpsing familiarity and difference in varied measure before tumbling into something like the sea. I kept reading, not because I wanted to reach the end, but because I wanted to dwell in the honey-light of Hoffman's words. I wanted to hold these characters' hands.

Sometimes the degree to which I know Practical Magic by heart worked against my enjoyment, as Rules of Magic contradicts or rewrites elements of the former in order to fully develop the aunts' lives. Mostly this was welcome; Practical Magic suggests that the only romance the aunts ever experienced ended when lightning struck their teenage lovers, while The Rules of Magic quietly acknowledges and then brushes past that incident early on. But some parts — especially perceptions of the siblings' respective flavors of witchiness — made me frown and reach for Practical Magic as an authority on the subject. Which of course it needn't be; final process can certainly trump first thoughts. But reconciling the differences was sometimes distracting.

Hoffman's prose is as tender, dreamy and sweet as ever, laced with the sting of vinegar and broken glass.

For a book titled as it is, there seem to be no more rules to magic than to poetry. Magic here is old family recipes that yield surprising results in new ovens. Given this, I was sometimes confused by how often do no harm came up as an exhortation or a plot point, when by any conceivable metric the Owens siblings do harm people — and themselves — with magic all the time. Trying to puzzle a consistency out of the magic use was a bit like trying to bottle up the river with a sieve, so for the most part I shrugged it off and just lay back into the current.

But overall, the tug of the familiar and the enchantment of the new are the rule to which the above were exceptions. Hoffman's prose is as tender, dreamy and sweet as ever, laced with the sting of vinegar and broken glass. It's startling to take stock of how of a piece this book feels with its predecessor, of what a complicated dance of interlocking nostalgias this book explores and provokes: I, reading a book cataloguing a time during which Hoffman was a child, feel a tug of nostalgia towards the child I was while reading the book she wrote about adults my mother's age. Circles close within circles and spiral out again, and there's a magic in that too.

The Rules of Magic shows that sometimes the work you do comes back to you threefold — and sometimes you go back to the work you've done, and unfold three times more color from it.