Accessibility links
EPA Vows To Speed Cleanup Of Toxic Superfund Sites Despite Funding Drop Superfund was initially paid for by taxes on crude oil, chemicals and the companies that created the toxic waste sites. But those taxes expired in 1995, leaving states strapped to find the money. 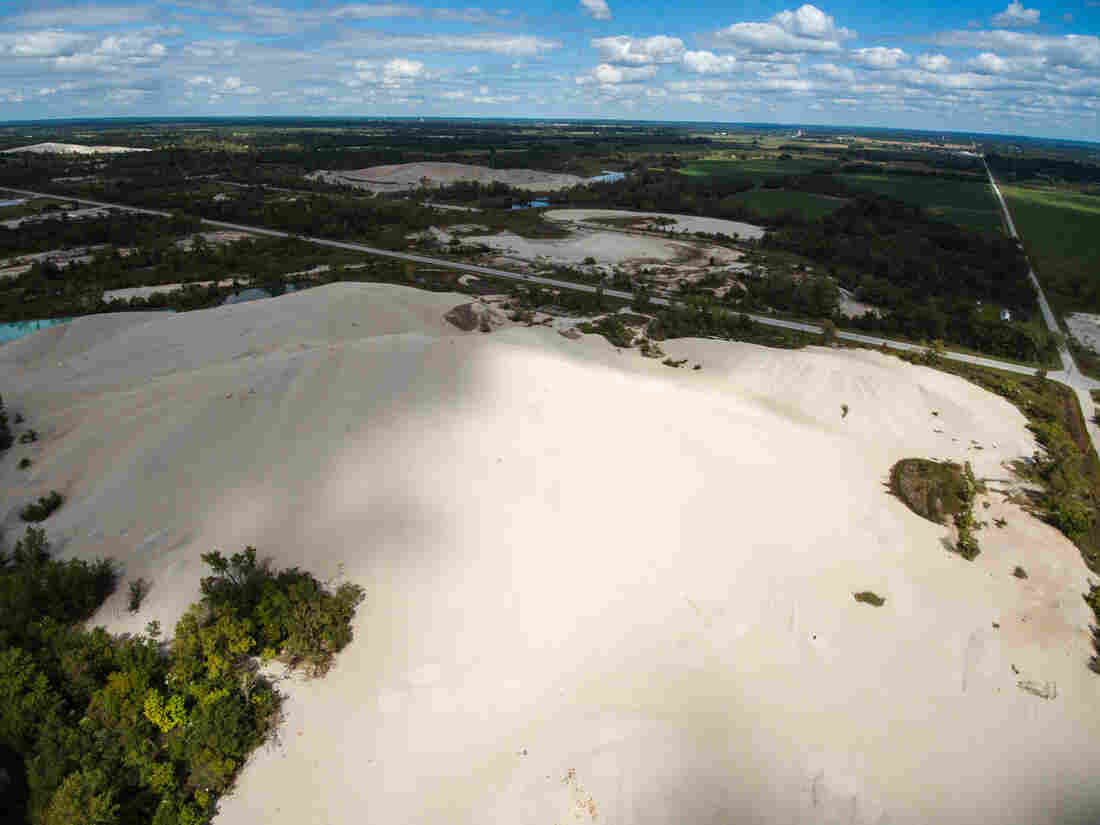 An aerial photo shows hills of mining waste known as "chat" scattered throughout the abandoned lead and zinc mine at the Tar Creek Superfund site. Joe Wertz/Stateimpact Oklahoma hide caption 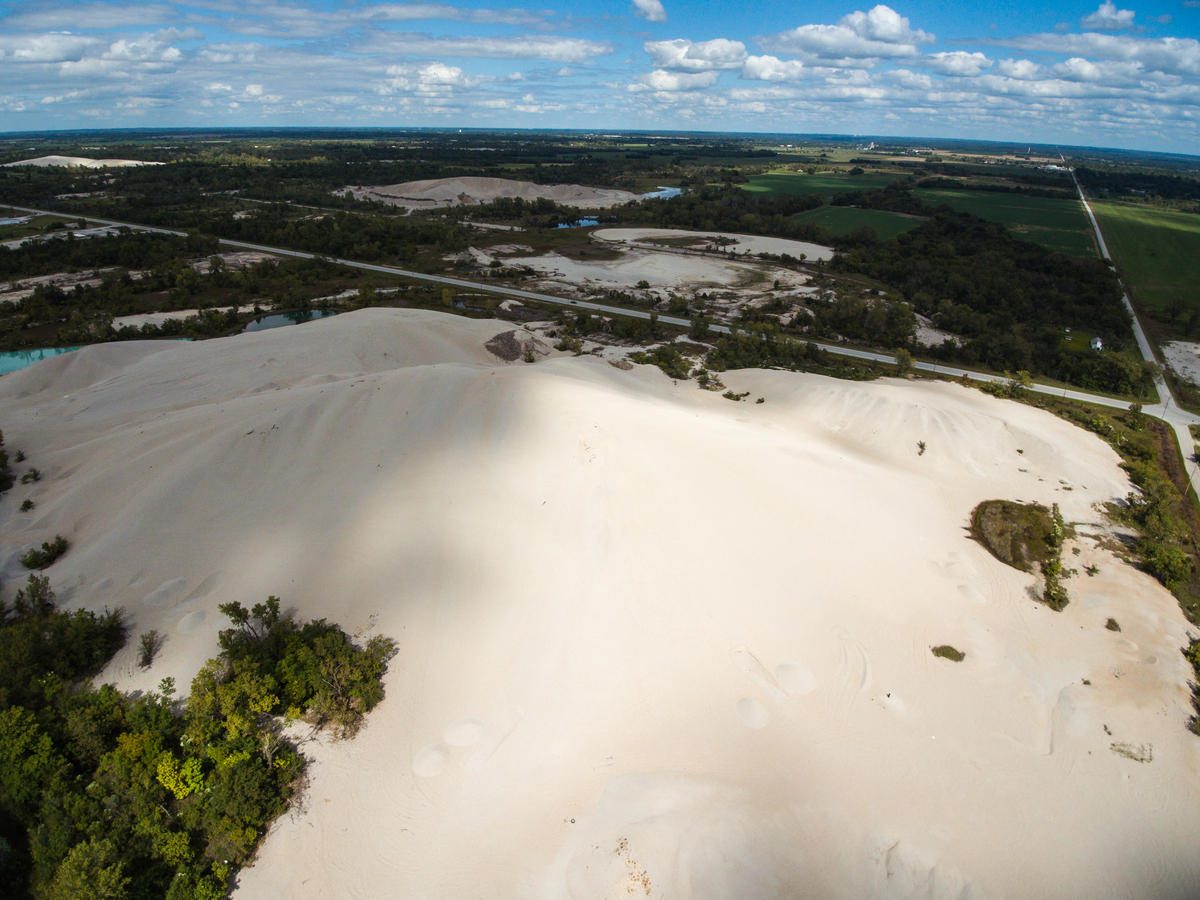 An aerial photo shows hills of mining waste known as "chat" scattered throughout the abandoned lead and zinc mine at the Tar Creek Superfund site.

Environmental Protection Agency Administrator Scott Pruitt is vowing to speed the cleanup of toxic Superfund sites, part of a shift away from climate change and toward what he calls the "basics" of clean air and water. The EPA's Superfund program manages the cleanup of some of the most toxic waste sites. Pruitt says the EPA will soon name a top 10 list of sites to focus on.

One potential site for that list is the Tar Creek Superfund site in far northeast Oklahoma, where a team of agency officials recently visited.

"We took them up top a chat pile and they can see, for miles, the effects Tar Creek has had on the environment, on the community," says Craig Kreman of the local Quapaw tribe, which heads the cleanup. "Chat" is the name for mining waste, and enormous moon-colored dunes of it line the horizon of this vast, damaged landscape.

This was once one of the world's largest sources of lead and zinc. It's where half of the metal the military used for bullets in World War I was produced. Production stopped by the 1970s, leaving behind 300 miles of caverns, dangerous dust, and toxic red water that bubbles into a critical watershed.

Tar Creek was one of the first sites added to the EPA's Superfund list in 1983. Blood tests later showed a large share of local children had elevated lead levels. Eventually, hundreds of residents took buyouts. Homes and businesses were demolished, leaving a ghost town with streets and driveways that lead only to weeds. 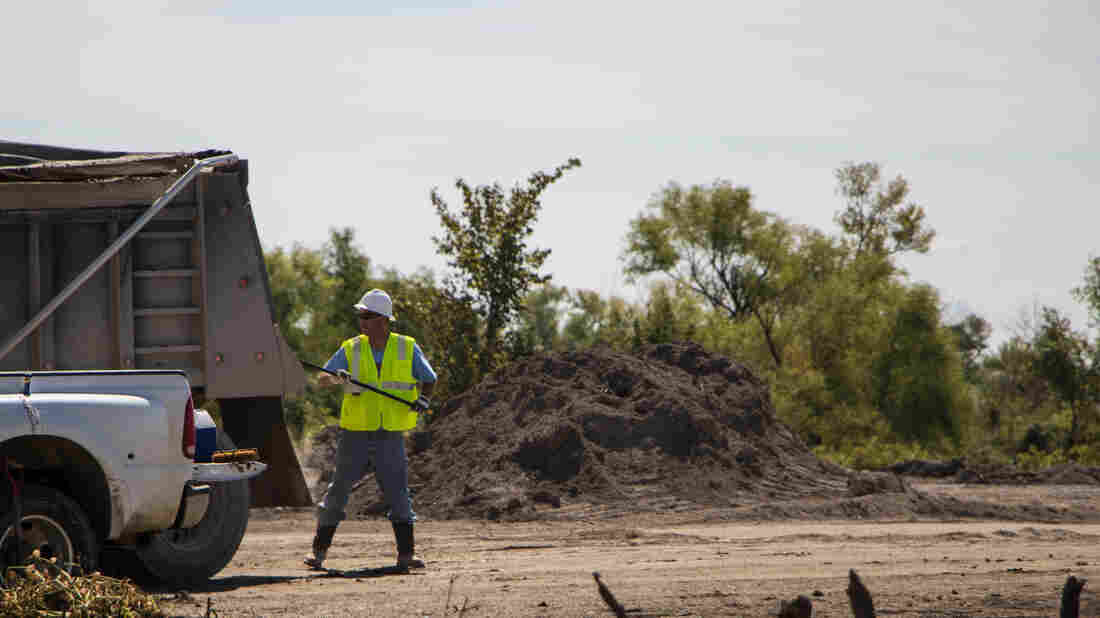 A worker brushes dusty mine waste off a truck before it exits the contaminated site. Joe Wertz/Stateimpact Oklahoma hide caption 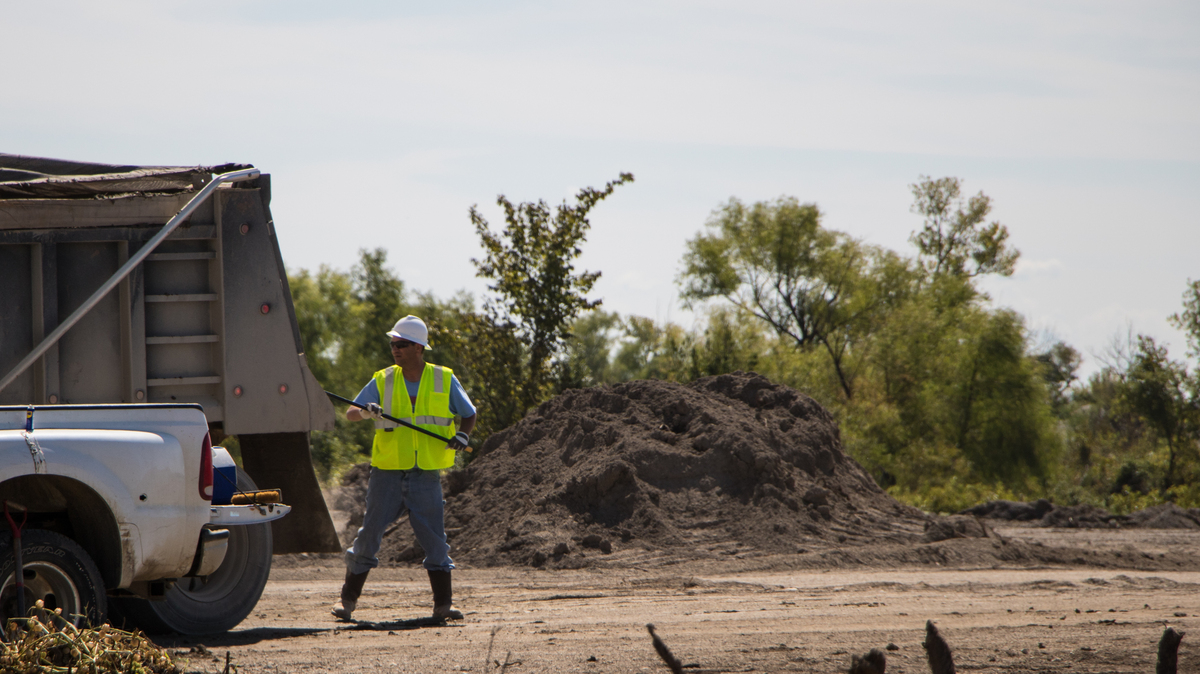 A worker brushes dusty mine waste off a truck before it exits the contaminated site.

These days a steady line of trucks makes a loop as the trucks load up mining waste and carry it away. "You get 10 trucks, let's say 180 truckloads a day, and we're averaging almost 3,000 tons a day of chat to the repository," says Kreman.

Tar Creek is exactly the kind of place EPA Administrator Pruitt says should be more of a priority.

"When you look at the roughly 1,330 Superfund sites across the country, there are many that have been on that National Priority List for decades," he told a U.S. House subcommittee this past summer. But President Trump's budget would slash funding for the Superfund program by nearly a third. In his House testimony, Pruitt was asked how the agency could clean up sites faster with less money.

"It's more about decision-making, leadership and management than money," he said.

But Kate Probst, an independent consultant who has studied the Superfund program for 20 years, says lack of funding is a big problem and has been for a long time.

Superfund was initially paid for by taxes on crude oil, chemicals and corporations, the companies that created the toxic waste sites. But those taxes expired in 1995. Most Superfund cleanup money now comes from taxpayers. And that congressional funding has declined for nearly two decades, during both Republican and Democratic administrations. That leaves states strapped.

"They don't have the money to clean up an average Superfund site in most states," Probst says. "They just don't have $25 million."

A new report from the EPA's inspector general suggests understaffing during the Obama administration slowed Superfund cleanups across much of the country. Probst also blames technical problems, foot-dragging by companies deemed responsible for contamination, and a basic lack of data about some sites and the health hazards they pose. 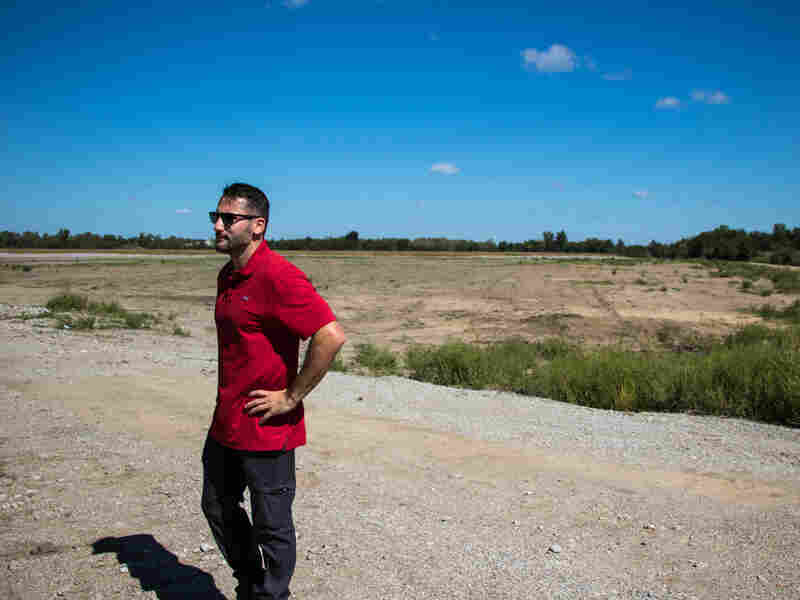 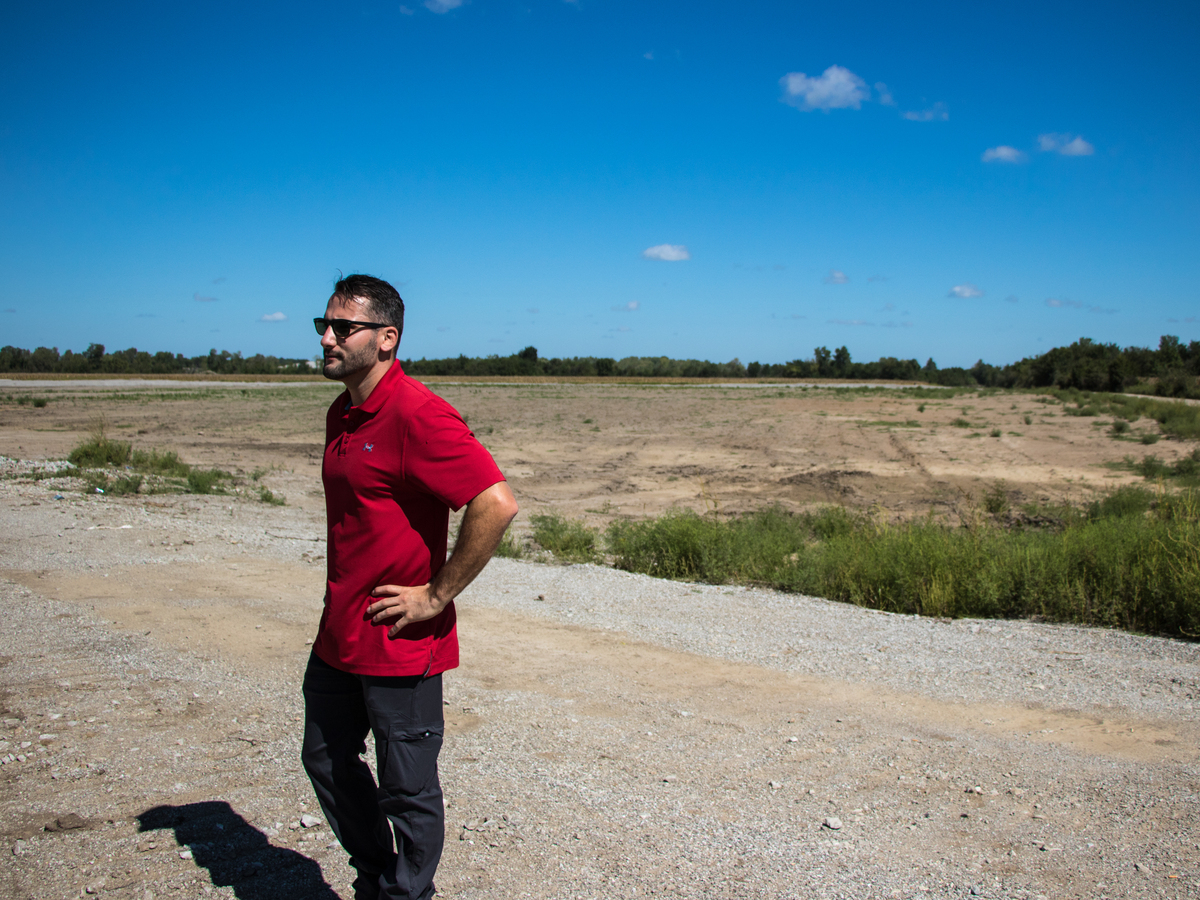 "Really move to the sites quicker," Kelly says, and figure out what impediments "have been, over time, kind of ingrained into the process. And then find ways to say, 'Let's get out there and let's get these cleanups done.'"

Kelly concedes the agency can't do more with less funding. But he says the hope is that focusing aggressive help on a shorter list will lead to substantial progress in those places.

"If there is indeed a Top 10 list, Tar Creek should be there," says Craig Kreman of the Quapaw tribe. But even if it does make the cut, he says this drawn out, expensive cleanup will likely still take decades longer and cost many millions more.