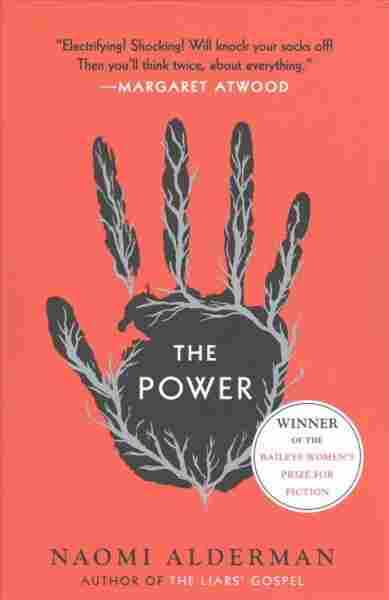 If you spend enough time talking with your most cynical friend about politics, you're likely to hear this quotation from the 19th-century British historian Lord Acton: "Power corrupts, and absolute power corrupts absolutely." It's a memorable axiom, but one that's been a little bit mangled by time — Acton actually wrote that "Power tends to corrupt." The misquoted version still pops up, however, thanks to pessimists who think that history has removed the need for Acton's original hedge.

The question of whether power is bound to corrupt forms a central theme of Naomi Alderman's fascinating new novel, The Power. For the vast majority of recorded history, men have held power over women, treating them as lesser human beings, even objects that can be used or destroyed at will. Alderman's book asks an intriguing question: What if that power structure were reversed?

The Power takes place in a society that looks much like our current one, except for one key difference: women have discovered that they have the ability to generate electrical power, which they can use to injure and kill men. The news picks up on the story after parents and teachers notice "a strange new kind of fighting which leaves boys ... breathless and twitching, with scars like unfurling leaves winding up their arms or legs or across the soft flesh of their middles."

The New Running Game Where 'Zombies' Chase You

Authorities try in vain to find a "cure" for the power, but to no avail. In America, Mayor Cleary sets up a series of camps where girls can learn to control their power, while Allie, on the run from the law, hides in a convent and develops something of a messianic complex: "God is telling the world that there is to be a new order," she thinks. "That the old way is overturned. The old centuries are done." Soon, she's the de facto leader of a millennialist religion that draws women from all over the world.

In Europe, Tunde meets a Moldovan woman who founds a breakaway republic for women; it doesn't take long for her to become drunk with power, at one point, forcing a male servant to eat broken glass after he interrupts her speaking. And in India, he comes across a woman who realizes that the world has changed forever: "Now they will know that they are the ones who should not walk out of their houses alone at night. They are the ones who should be afraid."

The Power is a dizzy, unsettling book that doesn't let readers turn away from the horrors at its core. There are graphic scenes of sexual assault, with women using their power to rape men: "This is not what happens to a man. Except now it is." Gender roles have reversed completely, with "boys dressing as girls to seem more powerful. Girls dressing as boys ... to leap on the unsuspecting, wolf in sheep's clothing."

'The Power' is a dizzy, unsettling book that doesn't let readers turn away from the horrors at its core.

The atrocities that women visit upon men in Alderman's novel — humiliation, torture, genital mutilation — are all, of course, things that happen today, but with the genders reversed. That is, perhaps, the point of the novel — what a man reads as a horrifying dystopia, a woman reads as a fairly accurate state of the world as it is today. "We don't have to ask what they'd do if they were in control," as a mysterious voice tells Allie. "We've seen it already. It's worse than this."

Novels based on premises like the one at the core of The Power can quickly become little more than thought experiments, but Alderman dodges this trap deftly — her writing is beautiful, and her intelligence seems almost limitless. She also has a pitch-dark sense of humor that she wields perfectly — one section recreates an Internet forum with eerie accuracy, down to random anti-vaccine activists popping in.

It ends with a devastating last paragraph that's hilarious, biting and perfect. But although the last words are a quasi-joke, it doesn't at all lessen the impact of what came before. The Power is a captivating novel that asks us to consider a dystopia that already exists, and has for centuries. "The power to hurt is a kind of wealth," she writes. And there always comes a day when the poor decide that in order to survive, they'll have to eat the rich.