Accessibility links
Trump Challenges Secretary of State Rex Tillerson To IQ Test, Feuds With GOP Sen. Bob Corker The president seems intent on keeping everyone on their toes, but it's not at all clear that there's a strategy behind it all.

Trump Challenges Cabinet Member's IQ, Fights Senator He Needs. What Is Going On?

Trump Challenges Cabinet Member's IQ, Fights Senator He Needs. What Is Going On? 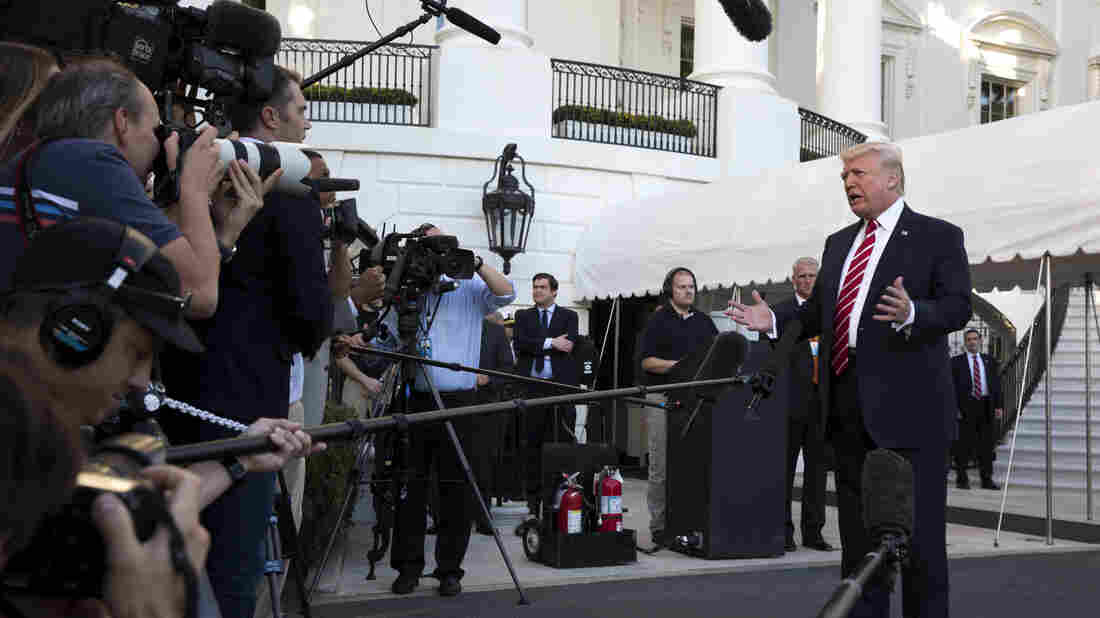 President Trump speaks to the media before boarding Marine One on the South Lawn of the White House on Saturday. Pool/Getty Images hide caption 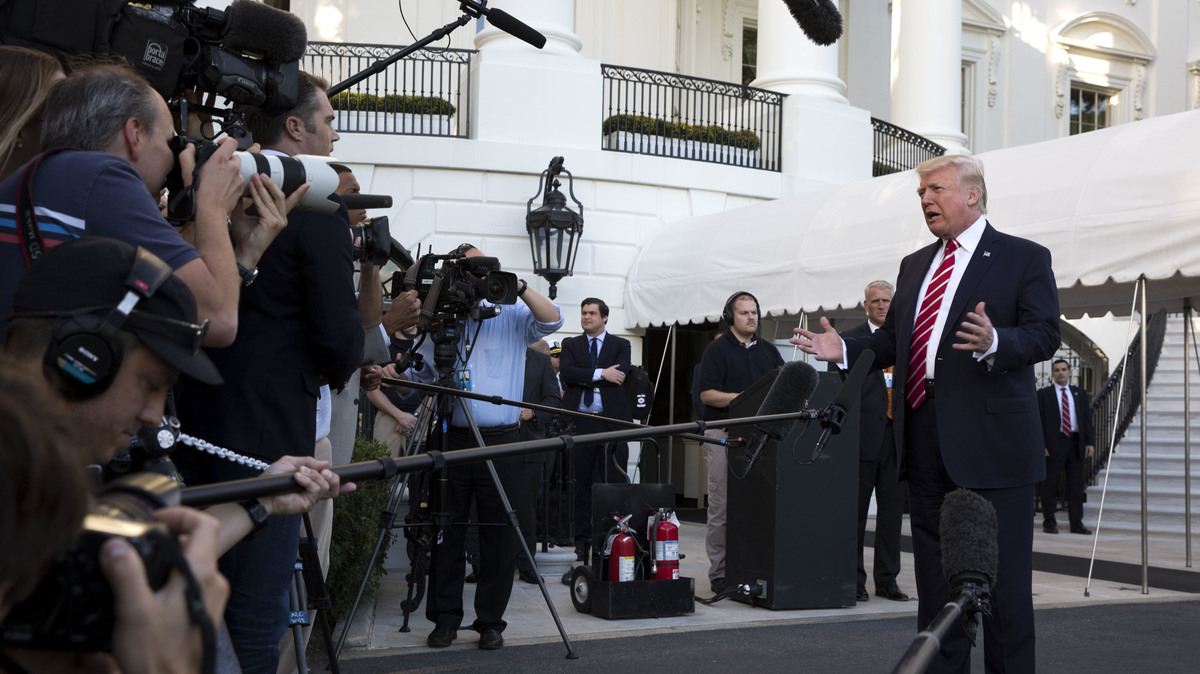 President Trump speaks to the media before boarding Marine One on the South Lawn of the White House on Saturday.

The past few days have been particularly chaotic, even for a president who seems to thrive on self-created chaos.

There's been a feud with a key Republican senator, a flare-up at a professional football game with President Trump instructing his vice president to walk out when players (on the most activist team in the NFL) knelt during the national anthem, and he even questioned the IQ of his secretary of state.

It comes on the heels of Trump's spat with the mayor of San Juan, Puerto Rico, as well as his odd and mysterious threat about a "calm before the storm" while meeting with military leaders. (Mostly, that seemed to be a tease, to build drama, and, frankly, mess with the media. Cable news outlets were obsessing over the comment for hours. Could something be in the works? Maybe, but there have been plenty of other things Trump has teased were coming soon, but never did.)

"Containment" has a whole new meaning

Trump's war of words with Sen. Bob Corker of Tennessee took place mostly — where else — on Twitter. After Corker unburdened himself in an interview with the New York Times -- in which he grabbed headlines by saying that he worries Trump will set the country "on the path to World War III" — Trump slammed him.

The president claimed Corker "begged" for an endorsement for re-election and was lobbying to be secretary of state.

Senator Bob Corker "begged" me to endorse him for re-election in Tennessee. I said "NO" and he dropped out (said he could not win without...

..my endorsement). He also wanted to be Secretary of State, I said "NO THANKS." He is also largely responsible for the horrendous Iran Deal!

...Hence, I would fully expect Corker to be a negative voice and stand in the way of our great agenda. Didn't have the guts to run!

For the record, Corker called the allegations false. And he responded to Trump, saying that someone must have missed a shift at the "adult day care" center that is the White House.

It's a shame the White House has become an adult day care center. Someone obviously missed their shift this morning.

This is a big deal because Corker could be key to passing a tax overhaul and reimposing sanctions on Iran if the president tries to upend the current nuclear agreement struck under the Obama presidency. Corker isn't running for re-election and is now free to speak his mind publicly — in a way few other Republican senators have been.

In foreign policy, "containment" is supposed to be what the United States tries to do to its enemies — not to its own commander in chief. But containment is what Corker said is happening at the White House.

"I know for a fact that every single day at the White House, it's a situation of trying to contain him," Corker told the Times. He also said Trump was treating the presidency like a "reality TV show."

This wasn't the first time Corker had expressed concerns about Trump. Back in August, after the marches in Charlottesville, Va., he said Trump was not demonstrating the stability or competence needed to be a successful president. Corker also described Secretary of State Rex Tillerson as one of the people "separating our country from chaos."

The sentiment is hardly isolated to Corker. It tracks with what other congressional Republicans express privately — frustration, embarrassment and real concern about the commander in chief. But they can't say it publicly.

"It's easy to be bold when you're not coming back," Meadows said.

That could give Corker an ability to be as uncontained as he might want.

Being in a fight seems to be Trump's default position. And he's willing to do it even with a senator he needs. 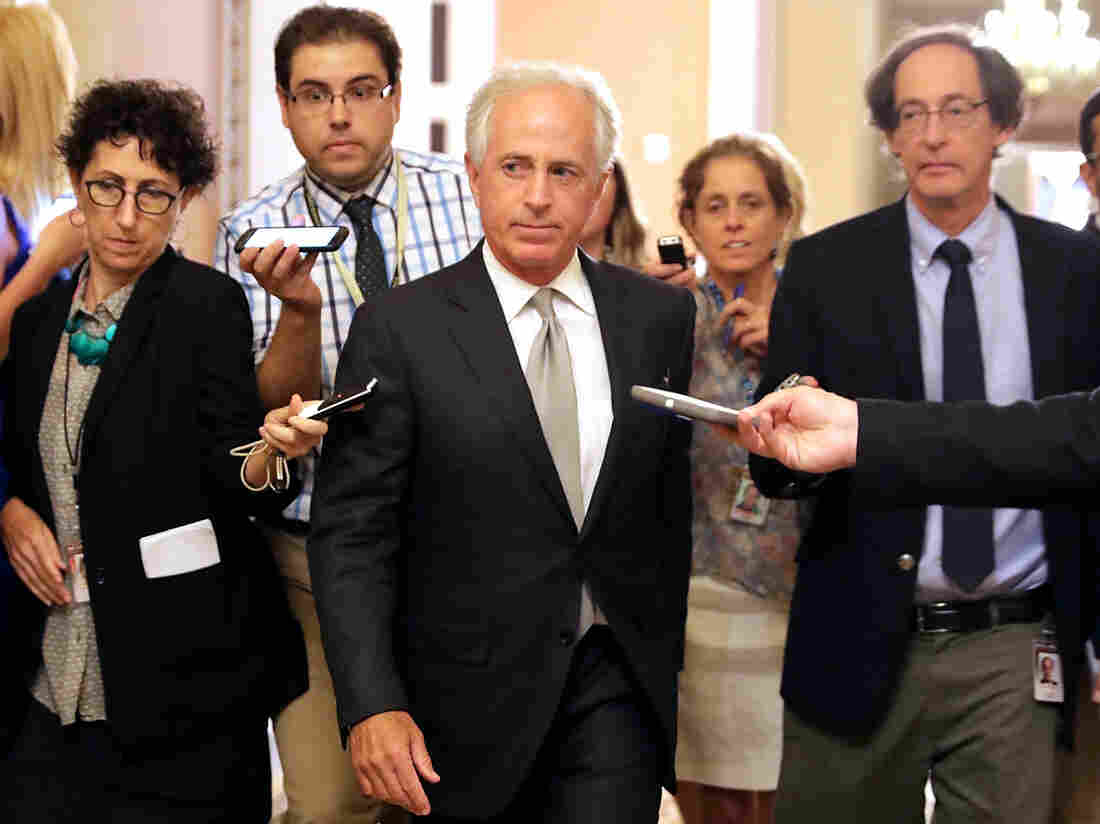 Senate Foreign Relations Committee Chairman Bob Corker, R-Tenn., is in a war of words with President Trump, and neither is holding back. Chip Somodevilla/Getty Images hide caption 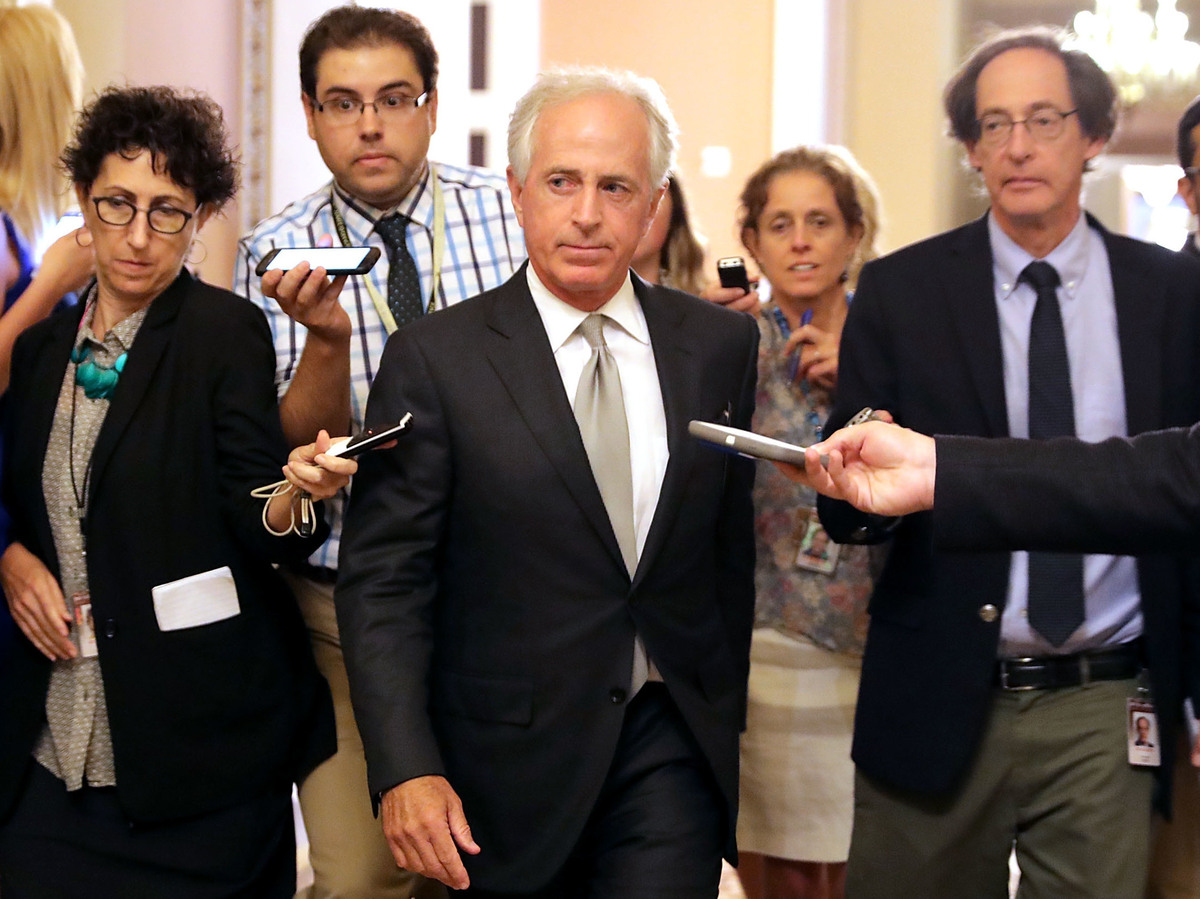 Senate Foreign Relations Committee Chairman Bob Corker, R-Tenn., is in a war of words with President Trump, and neither is holding back.

Watching Vice President Pence walk out of an NFL game was stunning. And signs indicate it may have been planned.

"The pool of journalists accompanying the vice president was not allowed into the stadium and was asked to stay in their vans. They were told by a staffer that 'there may be an early departure from the game,' but were not given any further details."

It's to be expected that players currently are going to kneel at games. So you have a situation in which the president told the vice president to leave the game if anyone knelt — a deliberate strategy to make a statement. The White House says this is all about the flag and honoring veterans. But it's a move that could be seen as a continued effort to sow division for political gain.

(That's not to mention that the trip may have cost $200,000 at taxpayers' expense, according to one estimate.)

Pence issued several tweets of his own, including this one that showed loyalty to the president, which said, in part, "I stand with President Trump."

I stand with @POTUS Trump, I stand with our soldiers, and I will always stand for our Flag and our National Anthem. pic.twitter.com/B0zP5M41MQ

Pence's statement after the Corker flare-up showed even more fealty to Trump.

"President Trump is achieving real results on the international stage," Pence said, in part. "While critics engage in empty rhetoric and baseless attacks, under the President's leadership, ISIS is on the run; North Korea is isolated like never before; and our NATO allies are doing more to pay their fair share for our common defense."

Last week, NBC News reported that Tillerson called Trump a "moron" after the president's controversial speech before the Boy Scouts this summer.

Tillerson denied some details of the report — that he'd ever considered resigning or that the vice president had to step in to persuade him to stay on. But he did not explicitly deny having called Trump a "moron." A spokeswoman later said he doesn't use that kind of language.

I don't believe in undercutting people.

President Trump to reporters after being asked if he was undercutting Secretary of State Rex Tillerson by saying he would like to compare IQ tests, if Tillerson did call him a "moron"

Trump seems to not be totally convinced Tillerson didn't say it.

"I think it's fake news," Trump told Forbes magazine, "but if he did that, I guess we'll have to compare IQ tests. And I can tell you who is going to win."

Asked by reporters Tuesday if he was undercutting Tillerson with the remark, Trump said no.

"I didn't undercut anybody," he said. "I don't believe in undercutting people."

Newly installed White House chief of staff John Kelly has been able to impose more discipline on the White House staff, but very little on the president himself. In a scripted setting, like the president's trip to Las Vegas after the massacre there, Trump performed much as previous presidents have.

But left alone with his phone and 140 characters — no way. 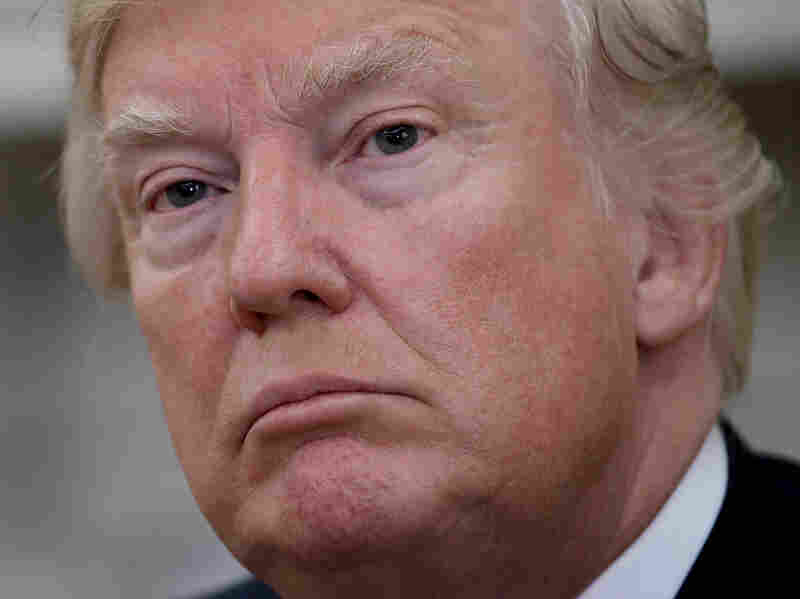 President Trump is embroiled in a spat with a prominent Republican senator and seems perpetually surrounded by chaos, as major legislation continues to languish. Win McNamee/Getty Images hide caption 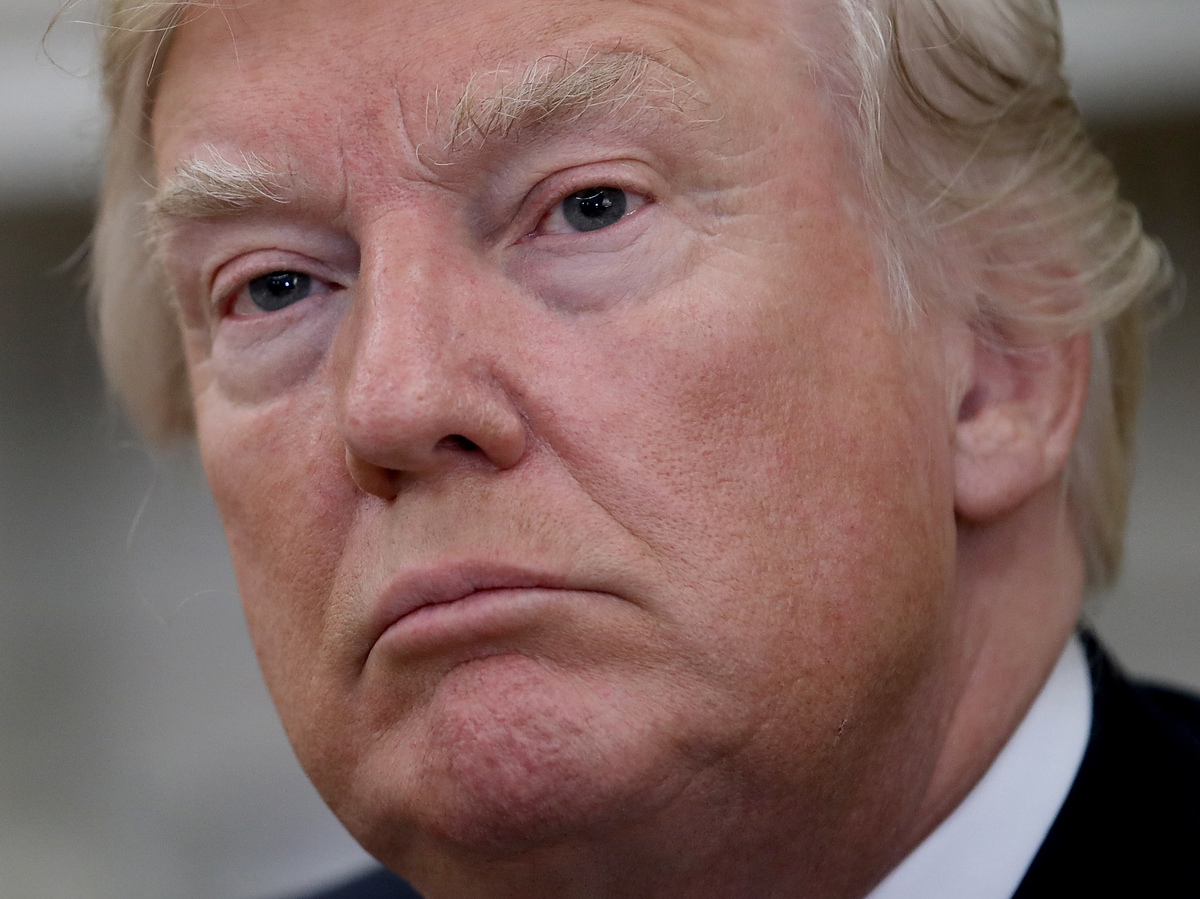 President Trump is embroiled in a spat with a prominent Republican senator and seems perpetually surrounded by chaos, as major legislation continues to languish.

Trump wasn't even able to stick to the script in Puerto Rico, where he bristled at what he felt was an insufficient expression of gratitude from the mayor of San Juan. And in meeting "regular" people, who are in dire straits in the aftermath of two hurricanes, he struggled to strike the right chord.

Trump oddly didn't seem to understand how water filtration works, and he shot paper towels like basketballs into a crowd at a photo op designed to show him handing out supplies — and caring.

But what he seemed to care about most was how he and his administration were perceived.

"Every death is a horror, but if you look at a real catastrophe like Katrina and you look at the tremendous — hundreds and hundreds of people that died — and you look at what happened here," Trump said, "with, really, a storm that was just totally overpowering — no one has ever seen anything like this. What is your death count?"

The feuding with the mayor of San Juan and the Republican chairman of the Senate Foreign Relations Committee along with the "the calm before the storm" comment all add up to what, exactly? A president playing three-dimensional chess, one going off the rails, one just acting on instinct — or all of it?

Last weekend, there were moments when a strategy seemed to emerge. He returned to attacks on the media, a divisive argument over kneeling players in the NFL, possibly to distract from other bad news, like the fact that there is still no electrical power for the vast majority of residents in Puerto Rico.

But at other times — threats against North Korea, "calm before the storm," early-morning tweets — it's hard to discern exactly what he's trying to accomplish.

Is he serious? Is it all a "ratings" ploy?

It's possible — as many members of his own party now believe — that he doesn't know, either.