Accessibility links
A Major Work Of Friction: 'The Meyerowitz Stories (New And Selected)' While not as tightly structured as his previous work, writer-director Noah Baumbach's latest dissection of men whose egos outstrip their talent is just as closely observed as ever. 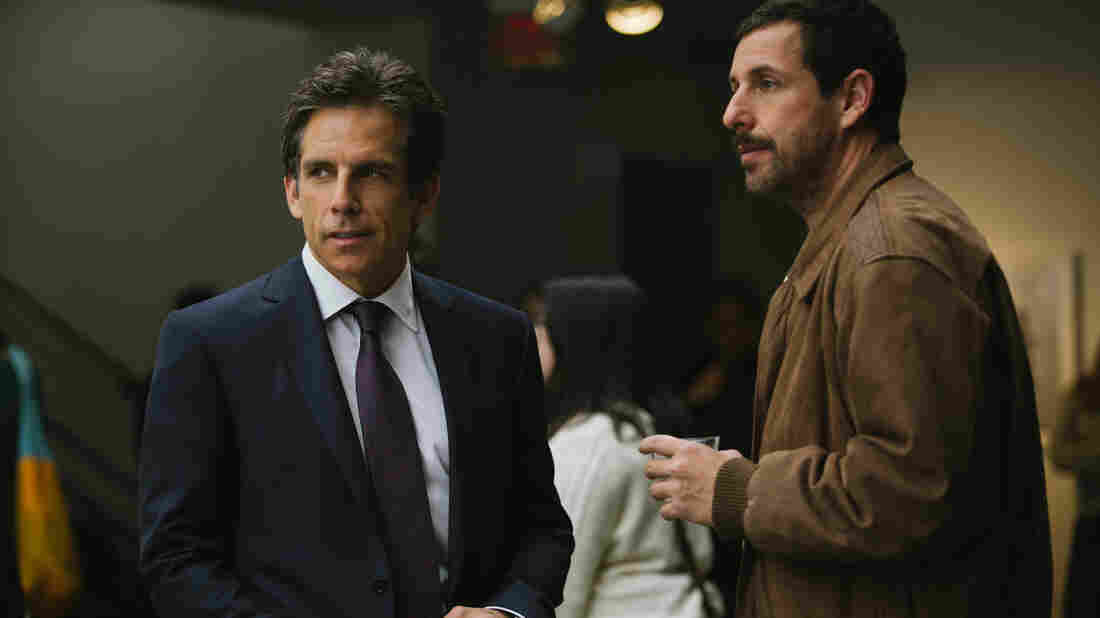 Ben Stiller and Adam Sandler are brothers in conflict in The Meyerowitz Stories (New and Selected). Atsushi Nishijima/Netflix hide caption 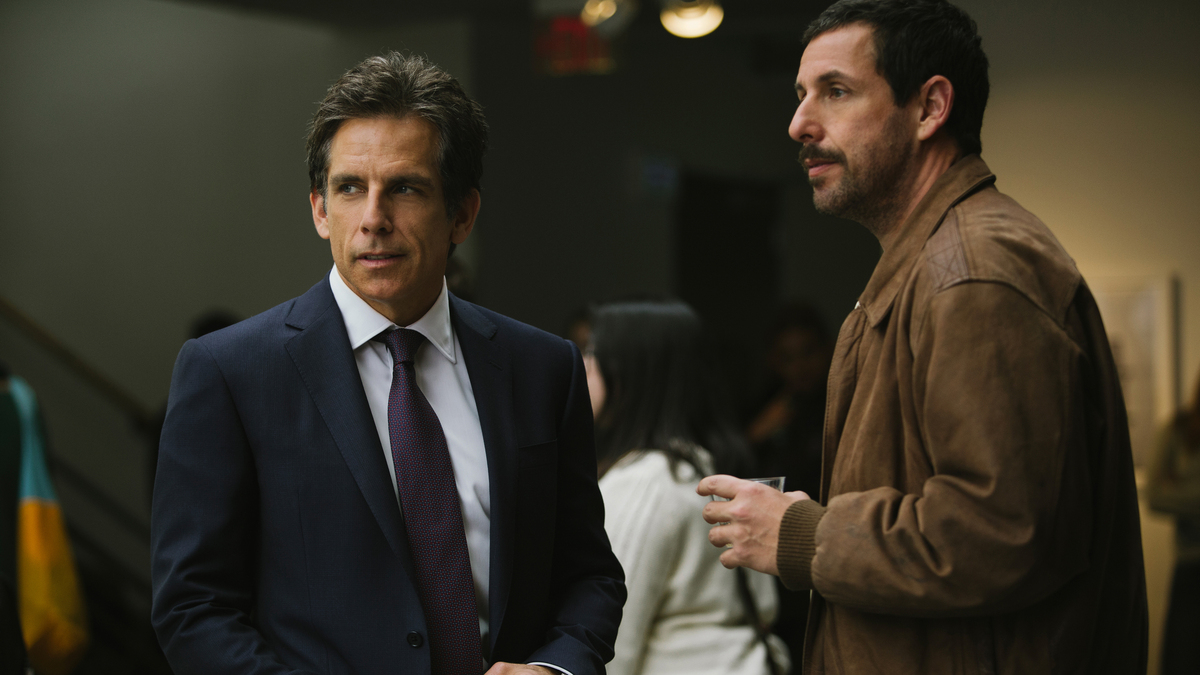 Ben Stiller and Adam Sandler are brothers in conflict in The Meyerowitz Stories (New and Selected).

Our elders didn't warn us enough about the dangers of angry, selfish men, possibly because some of them were angry, selfish men themselves. So consider the films of writer-director Noah Baumbach to be an education. Baumbach has long delighted in mocking the egomaniacs in the art world, crafting biting dark comedies around minor figures with major attitudes. He's come closer than anyone to discovering just where the breaking point lies between talent, stature, and awful behavior. In The Meyerowitz Stories, whose self-mocking subtitle (New and Selected) comes free of charge, Adam Sandler (yes, that Adam Sandler) says it best. "If he isn't a great artist, that means he was just a prick."

The possible prick in question is Harold Meyerowitz, an aging sculptor played by Dustin Hoffman. Harold is bitter and resentful at the art world for failing to anoint him as important: While his contemporaries enjoyed glowing reviews and star-studded gallery openings, he's made do with a teaching position at Bard College and a single work tucked away in storage at the Whitney (which the museum can't seem to find). Now on his fourth marriage and with no career retrospective in sight, Harold is planning to sell all his artwork to a couple that seems far more interested in the Manhattan family house the collection comes with. This decision pits his two adult sons against each other, as Danny (Sandler), a high school dropout and newly separated father who's never held down a job, goes toe-to-toe with his estranged half-brother Matthew (Ben Stiller), a hugely successful personal-wealth attorney who's relocated to Los Angeles and facilitated the family fire sale from afar.

So, yes, this is another dysfunctional genius family with a toxic narcissist papa, like The Royal Tenenbaums or Baumbach's own The Squid and the Whale... or J.D. Salinger's Glass family saga, which provided the original blueprint for this material. It should come as no surprise that Harold played favorites among his kids, grooming Matthew to become an artist while neglecting Danny's musical talent, and seemingly ignoring his daughter Jean (Elizabeth Marvel) altogether. And in the present day he unearths fresh reasons to be disappointed in all of them, even Matthew, whose business acumen would have delighted most Jewish parents but only irritates a father who would have preferred his offspring to be poor but celebrated artists. When Harold falls deathly ill and winds up in the hospital days before a major showing, his children seem to be making up their minds about how many tears to shed.

The story is familiar, but much like real-life minor artists, the subtle differences are what make it special. Chief among them are the inspired performances. It's easy to forget Sandler is capable of greatness when he's churning out one lazy comedy per year, but here he harnesses that familiar bitter edge as a man who's been made to feel like the black sheep his entire life. (Danny's got a bad, unexplained limp, which means Sandler's familiar lumber no longer feels like he's trying to schlub it up for his fans.) Stiller makes his typical put-upon straight man into a mess of uncertainty and terror, and though you might expect a shouting match between two of the most successful comedians of their generation to be played for laughs, the sadness and anger is what comes through strongest in their scenes together. And then there's Hoffman, in his juiciest role in years, who turns every conversation into a never-ending monologue about the honors he's owed.

The film remains focused on the men, which is a shame, as the woman Meyerowitzes are so fascinating we wish there was more room for them. Emma Thompson is delightfully dotty as Maureen, Harold's current wife (she calls him "the dad"), who insists she's staying sober even as she can barely stand up straight. As Danny's daughter Eliza, an incoming Bard freshman who makes uncomfortably sexual student films, Grace Van Patten is more charming and poised than all the adults in her midst – and her scenes with Sandler are sweet and lovely. Marvel's Jean, portrayed as a mousey quiet type, gets only one scene to stand out. But in it she relates a harrowing account of an older man's behavior that feels all the more disturbing in light of the recent news about one of the most powerful men in Hollywood.

If Baumbach is on repeat (Meyerowitz recycles elements from Squid, Greenberg, and While We're Young, without the youthful spark of his female-driven vehicles Frances Ha and Mistress America) it could be because, as a niche art figure himself, he senses how ripe these character types remain for puncturing. And though the latest effort isn't as tightly crafted as most of his earlier work, it's still prickly and dangerous enough to count for something more than the "oh, he's made another one" shrugs Woody Allen tends to get. Baumbach's ear for screwball dialogue remains unmatched, but he's equally adept at crafting perfect low-key comic situations. There are several scenes of characters running or fighting, but he doesn't shoot them close-up as most directors would. Close-ups would condone too much respect; wide angles better emphasize the smallness of these people, relative to their sense of self-worth. The brilliant, unorthodox editing by Jennifer Lame cuts our heroes off mid-outburst to transition between chapters with glee.

The decades go by, and the male ego rejuvenates itself to prey on the vulnerable. We know this; we try to fight it; we usually end up stoking it instead. Films like The Meyerowitz Stories are some of the best tools we have against it. They remind us that when you remove the power from a bully, you're left with something between disgust and pity, something a bit easier to reckon with.