Accessibility links
The Man Behind All Those Behinds: 'Tom of Finland' Despite its dutiful, box-checking nature, this biopic of the Finnish artist who brought gay sexual imagery out of the shadows finds room to let its characters breathe.

The Man Behind All Those Behinds: 'Tom of Finland'

The Man Behind All Those Behinds: 'Tom of Finland' 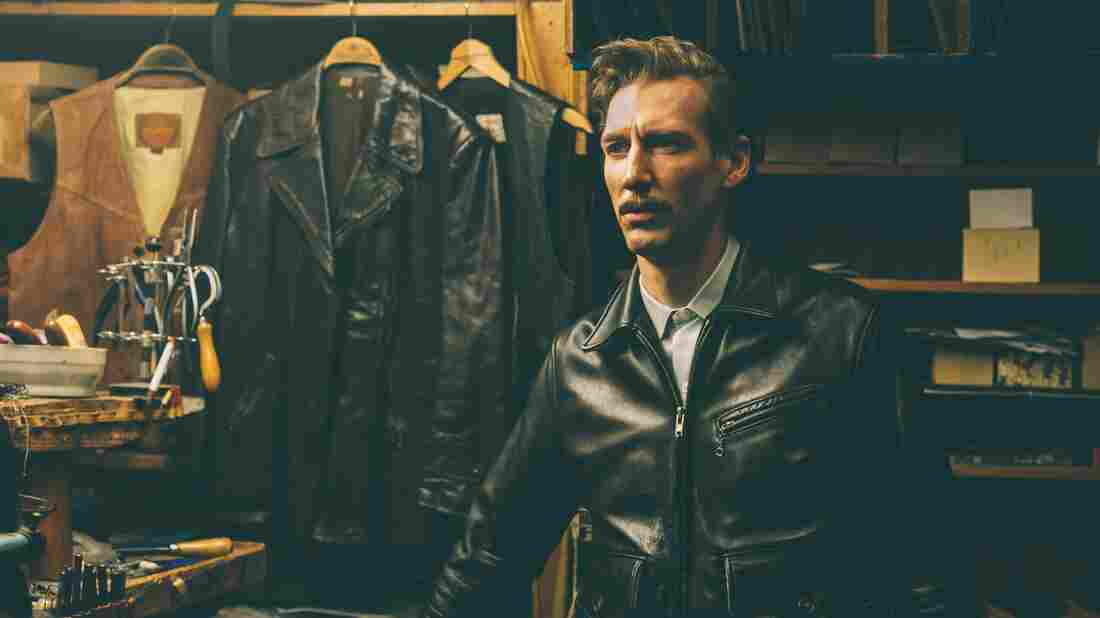 The Leather Underground: Pekka Strang plays Touko Laaksonen, known to the world as Tom of Finland.

Near the midpoint of director Dome Karukoski's Tom of Finland, artist Touko Laaksonen (Pekka Strang) sits on a bench, catching up with the man who was once his superior officer when they served in the Finnish army during World War II, years before.

"We've started a motorcycle club," he says. Pauses."Without the motorcycles."

Laaksonen would later gain international fame as Tom of Finland, producer of gleefully pornographic, if anatomically dubious, depictions of idealized men in (and, more often, out of) a variety of species of fervently fetishized, hypermasculine drag: burly construction workers, muscular soldiers, beefy cops and, especially, jacked leathermen — proud members of that aforementioned club who, lacking access to the seemingly requisite Harleys or Ducatis or Triumphs, ingeniously found other things to wrap their legs around.

The images Laaksonen produced carry a palpable electric charge that's still felt today, even as much more potent stuff can be summoned from the ether with a screen-tap. There's just something cheerfully smutty about them, a blithely innocent joy that offers a vision of a carefree (and pants-free) existence, far removed from both persecution and subcutaneous body fat.

But back in post-war Helsinki, where Karukoski's film begins, young Laaksonen's existence is far from frolicsome. It consists of furtive midnight encounters in parks and bathrooms, where he uses his explicit drawings as a combination of sexual lure and kinky calling card. The mere existence of that artwork, to say nothing of the encounters they accompany, places him in a constant state of legal and physical jeopardy. Karukoski depicts a series of police raids to evoke a time and place where gay men went about their lives both hunted and haunted.

The film's first half stops along several now-familiar stations of queer cinema's narrative cross, driven by an overriding sense of dutiful box-checking: police persecution, gay-bashing, the first stirrings of love, a gathering impatience with a culture of repression. It is to the film's credit, however, that while it slots its lone female character — Laaksonen's sister Kaija (Jessica Grabowsky) — into the role of a woman pining for her brother's secret lover, the gay dancer Veli (Lauri Tilkanen), it isn't content to stop there. Instead, the film allots her enough time and attention to emerge as a real and rounded character. Grabowsky gets to show us several of Kaija's facets — her rejection of her brother's sexuality; her longing for Veli; her tacit, stone-faced acceptance; her career frustrations and, ultimately, her utter disdain for her brother's work — in a way that builds to a raw and complicated characterization.

The film smartly switches perspective once Laaksonen's artwork finds its way out of Finland and into the waiting laps of an American audience. Smartly, that is, because it's at this point that Karukoski establishes his most compelling and revelatory theme. Tom of Finland's art did more than titillate gay men: For many, it created a world, a persona — an entire lifestyle — to adopt and eagerly evince.

Even so, a decorous restraint pervades Tom of Finland — which, given its subject matter, can't help but seem puzzling; Karukoski never manages to capture the hedonistic excess of Laaksonen's art. A viewer unfamiliar with the source material might come away from this film with the impression that the artist largely devoted himself to lightly risque illustrations of shapely male physiques, when the truth is considerably, and exultantly, filthier.

The film only glances at Laaksonen's embrace of fascist imagery, pays lip service to his feelings of guilt over contributing to a culture of raw sexuality that factored in the AIDS epidemic, and only-too-happily ignores his role in advancing uniform (and uniformed) notions of hilariously unrealistic male beauty that gay culture continues to internalize. Karukoski's determination to position Laaksonen as an inviolately noble culture warrior means there's not much room left for him to be anything else.

But then, Tom of Finland is a film about a man who devoted himself to creating perfectly flawless physical specimens. So while it may be disappointing that it so studiously rejects a warts-and-all approach to its subject — you can't really say it's surprising.