Accessibility links
Stream Colleen's New Album, 'A Flame My Love, A Frequency' The minimalist composer turns away from distorted strings and toward pocket synthesizers to create warm, electronic folk music.

Review: Colleen, 'A Flame My Love, A Frequency'

Review: Colleen, 'A Flame My Love, A Frequency' 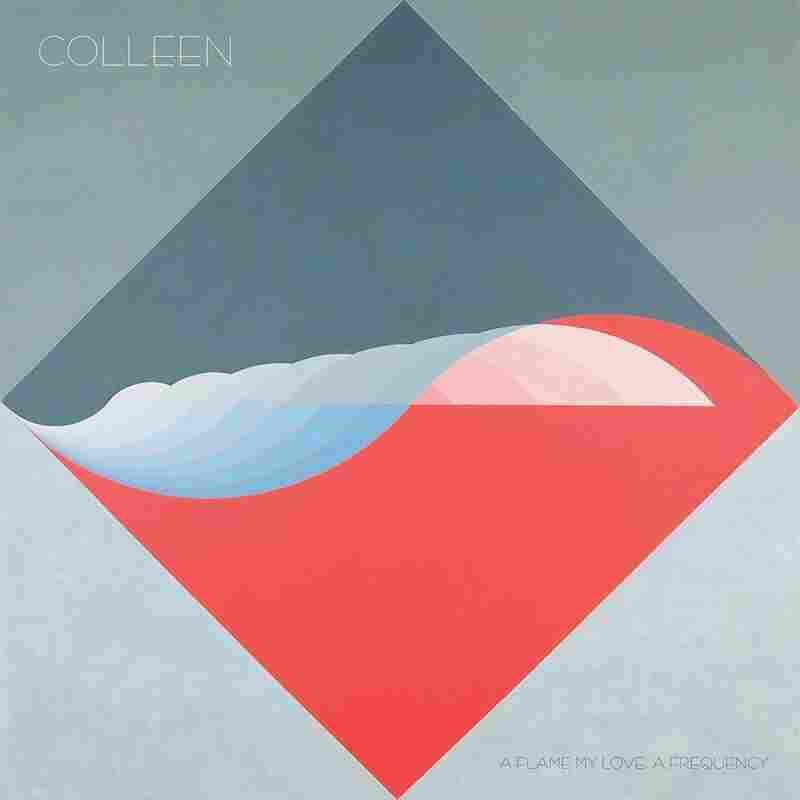 Two events directly impacted the sound and melancholy vision of Colleen's seventh album, A flame my love, a frequency. The first took place on tour in summer of 2015. The French composer and songwriter born Cecile Schott, much of whose previous music was made with the viola da gamba, happened upon a new synthesizer while visiting King Britt's Philadelphia studio. Schott thought it might prove useful for future work ... and it did, though not in the ways she imagined at the time. The other event was a chance stopover in Paris on November 13, 2015. She spent the afternoon relaxing in an arrondissement that just hours later would become a crime scene after the Paris terror attacks which struck the City of Lights that night. Upon returning to her home in San Sebastian, Spain, and trying to recover from the experience, Cecile started writing.

While the words and textures that poured into A flame my love, a frequency mark a shift, the album is also a natural logical evolution, and of a piece with Colleen's prior music. Schott's discography had largely been centered on processed strings and other acoustic devices — sampled, looped, chopped, distorted with delay pedals — as well as an engagement with natural world, and the relationship between sound and time. Early on in her career, before she started singing (in 2013), when software seemed the glue of her musical architecture, these ideas were presented as juxtapositions; but over the past few years, notions of the traditional and the artificial became entwined into a holistic whole. On her outstanding 2015 album, Captain Of None, Colleen played with dub melodica and recreations of West African percussion to give the distorted viol new colors, resulting in folk songs outside a specific era or ethnic lore, yet speaking directly to the tonality of the global present.

With aforementioned exceptions, there is direct continuity from that album to A flame my love.... Sensorily, the synths that Colleen adapted (the Critter & Guitari Pocket Piano and Septavox) bear little resemblance to her past tools; yet in her process, especially alongside Moog delay pedals, the clusters of repetitive melodic arpeggios retain Colleen's musical identity. Often, the music and the lyrics seem like distinct elements — spiritual, rhythmic, minimal — interacting by chance and circumstance. It is only when the arrangements fully unfurl that the thoughtfulness of the compositions comes into view, a counterbalance between the sad seeds of the album's themes and the underlying hopefulness of the artist's perspective. The latter almost always comes out ahead.

"The world had nearly ended yet the sky was blue / And I came home with a fistful of fear," Colleen states all-too matter-of-factly at the beginning of "Winter Dawn," while low-end synths chug in eighth notes. It is the artist's clearest invocation of the events that inspired many of these songs. But this realist darkness almost instantly gives way to other possibilities. Another synth enters, shimmering in counterpoint, and when Colleen's voice returns, it is disembodied and illuminated by echo, sweetly singing about looking ahead and opening up: "Deep and warm, golden dawn / Give me more of that light of yours." Just as the song seems to close, a third, altogether enchanting synth line appears as an optimistic coda.

Colleen specializes in such poetic flourishes, yet A flame my love, a frequency doesn't just use its main instrument's synthesis of melody and rhythm to brighten the metaphysical corners of the world outside. There are instrumental landscapes that exalt simple abstract wonders — "Another world" creating glorious 4/4 techno with a single pattern and nary a hint of a backbeat, while "One warm spark" turns two overlapping patterns into a glittering chimera. There's also "The stars vs creatures," a one-act folk-tale that is a debate between a human narrator, who gazes to the heavens for salvation, and some woodland creatures who claim themselves Exhibits A as to the world's wonder. All the while, a simple synth — metallic, resembling a gamelan or a steel drum — creates a warm background, playing the part of a Greek chorus, choosing neither argument. Like much of the rest of Colleen's album, "The stars vs creatures" posits a new cast and a new production into a timeless tale.