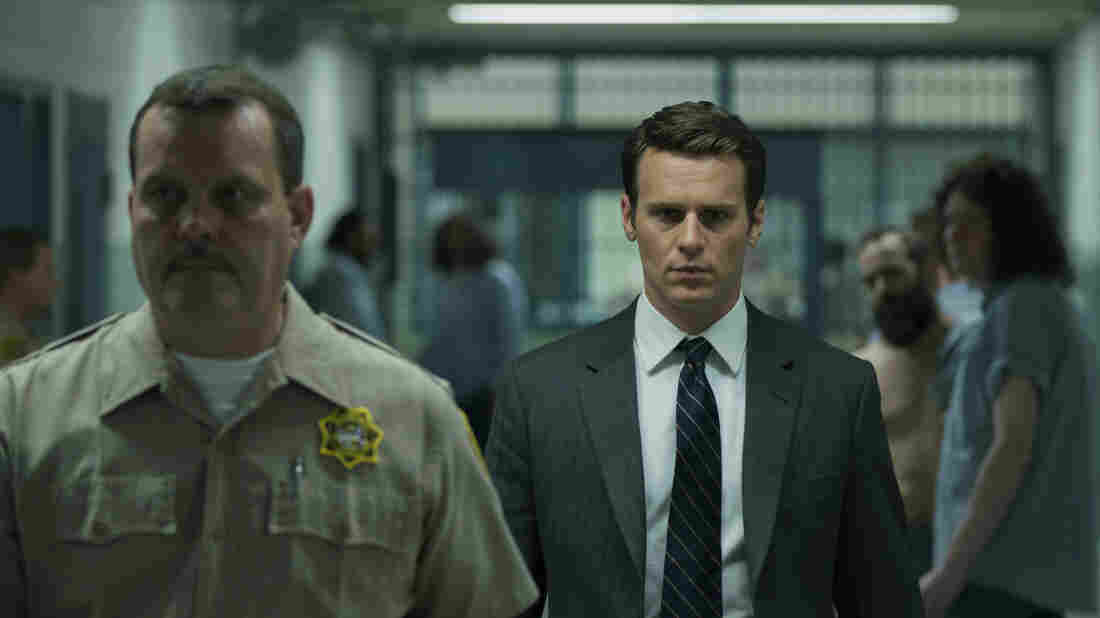 Jonathan Groff plays a young FBI agent with bold new ideas about how to learn from imprisoned murderers in the Netflix series Mindhunter, which becomes available on Friday. Patrick Harbron/Netflix hide caption 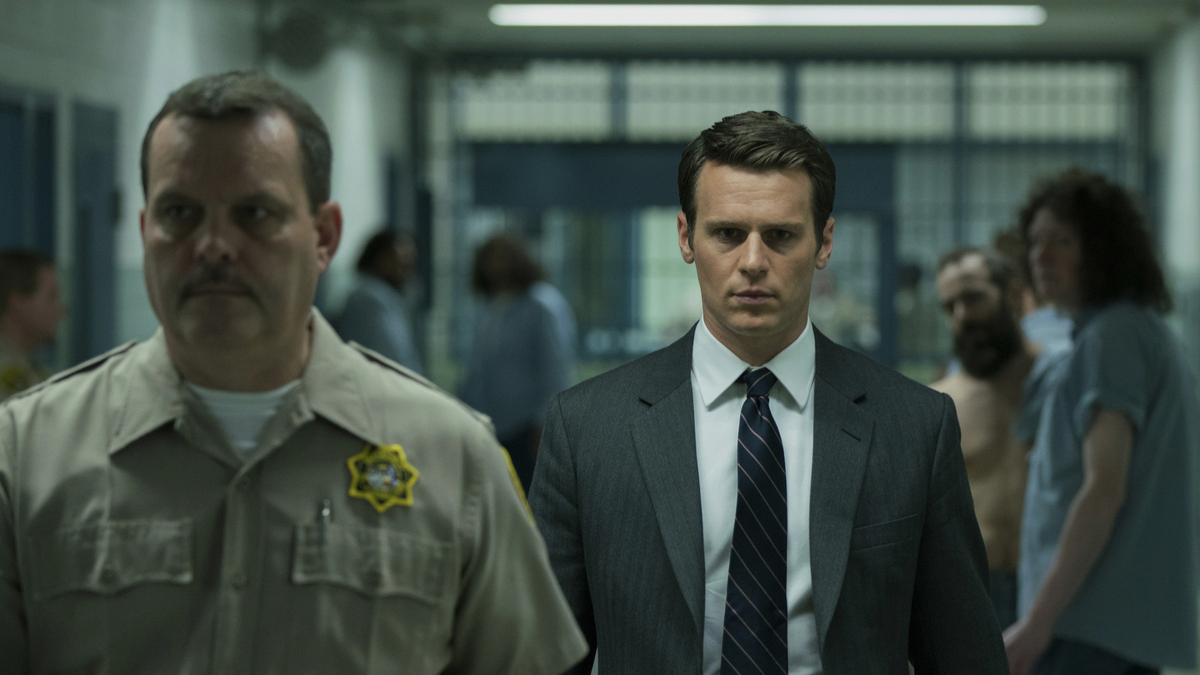 Jonathan Groff plays a young FBI agent with bold new ideas about how to learn from imprisoned murderers in the Netflix series Mindhunter, which becomes available on Friday.

Producer-director David Fincher is attracted to stories and characters that are dark and complex. That's certainly true of Mindhunter, his new police drama series for Netflix — though the connections that led him there are pretty straightforward.

Way back in 1995, Fincher directed Se7en, the ultraspooky serial-killer drama starring Brad Pitt and Morgan Freeman as detectives on the trail of a murderer played by Kevin Spacey.

Then, four years ago, Fincher directed the first two episodes of Netflix's House of Cards, starring Spacey — who, like Fincher, also served as an executive producer for the series.

Having helped to make Netflix into a respected player in original TV programming, Fincher returns to the network with a new drama about the hunt for serial killers.

Mindhunter begins in the late 1970s. It's adapted by Joe Penhall and based on a book with the same name by John E. Douglas and Mark Olshaker. Douglas is a real-life FBI investigator whose actual career is dramatized by one of the two protagonists at the center of the TV drama.

Jonathan Groff, who played Jesse on Fox's Glee, is Holden Ford, a young FBI agent with bold new ideas about how to learn from imprisoned murderers by interviewing them. Holt McCallany — who played the boxer on FX's Lights Out and was also one of the boxers in Fincher's Fight Club movie — is Bill Tench, the veteran FBI instructor who thinks young Holden may be on to something.

But after Holden tests his theory by visiting Edmund Kemper III, the so-called Co-Ed Killer, in prison, their FBI boss, played by Cotter Smith, is furious — and threatens to demote and even fire Holden, until the veteran Bill speaks up to defend him and his approach.

This new approach to solving crime was novel in the 1970s, when the term "serial killer" had yet to be widely used. But on television, fighting for a new way to catch killers is nothing new. Discovery Channel did it earlier this year by showing the institutional battles that had to be fought so that the Unabomber could be hunted in a new way in the miniseries Manhunt: Unabomber.

Netflix's Mindhunter is the same type of story. There are crimes to be solved, but internal politics are just as big a part of the show. And for Mindhunter, an even bigger part is when the FBI agents visit prisons and sit down for intimate chats with the captured killers.

The first time is when Holden visits Edmund Kemper — a soft-spoken giant of a man played with unshakable creepiness by Cameron Britton. The real-life Kemper not only killed several people in succession but also murdered his own mother — and continued to take out his rage on her corpse. Yet to Holden, this chilling killer initially comes off as deceptively average ... until he doesn't.

Mindhunter is the story of the formation of the FBI criminal profiling unit, and the mysteries are less about murder than about motive. What drives the mass murderer to commit such awful acts, and can anything be done to predict and prevent them? After events as recent as the mass shooting in Las Vegas, these questions are almost painfully topical — even though this drama is set in the 1970s.

Holden, the central character, is almost entirely passive during the first two episodes. He's less dynamic and has less memorable lines of dialogue than his partner, his boss, his new girlfriend (a psychology graduate played by Hannah Gross) and certainly the first killer he gets to meet.

But I don't think that's a knock on Groff, who was a scene-stealer in Hamilton on Broadway as King George III. His character of Holden, like Mindhunter itself, is intended to reveal itself at a more deliberate pace. One of the show's major stars, Anna Torv from Fringe, doesn't even appear in the two episodes previewed for critics.

Netflix already has renewed the series for a second season, so Mindhunter can take its time. The opening hours, directed by Fincher, are fascinating, even while they're in no hurry to tell the origin story of the FBI profiler. There are a couple of montages in particular that are beautifully assembled, showing the two agents trying to teach their theories to local police who, for the most part, are resistant to them.

But their new approach is precisely what makes Mindhunter so compelling. Most TV crime dramas are whodunits. Columbo famously reversed things by starting with the murder, and making it a "How'd he get him?" Mindhunter, in contrast to both those approaches, is all about motive. It's a "Whydunit."