Accessibility links
White House Chief Of Staff John Kelly: 'I'm Not Quitting' Or 'Being Fired' "I'm not so frustrated in this job that I'm thinking of leaving," the retired four-star Marine Corps general told the White House press corps Thursday in a surprise briefing room appearance.

White House Chief Of Staff John Kelly: 'I'm Not Quitting' Or 'Being Fired'

White House Chief Of Staff John Kelly: 'I'm Not Quitting' Or 'Being Fired' 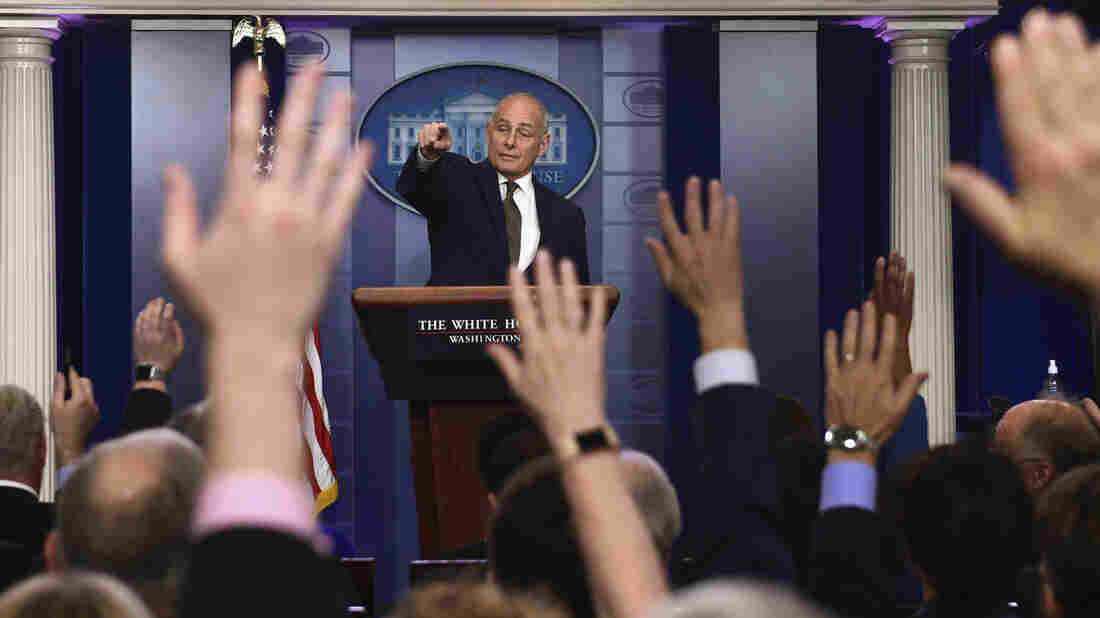 White House chief of staff John Kelly calls on a reporter during the daily briefing at the White House on Thursday. Susan Walsh/AP hide caption 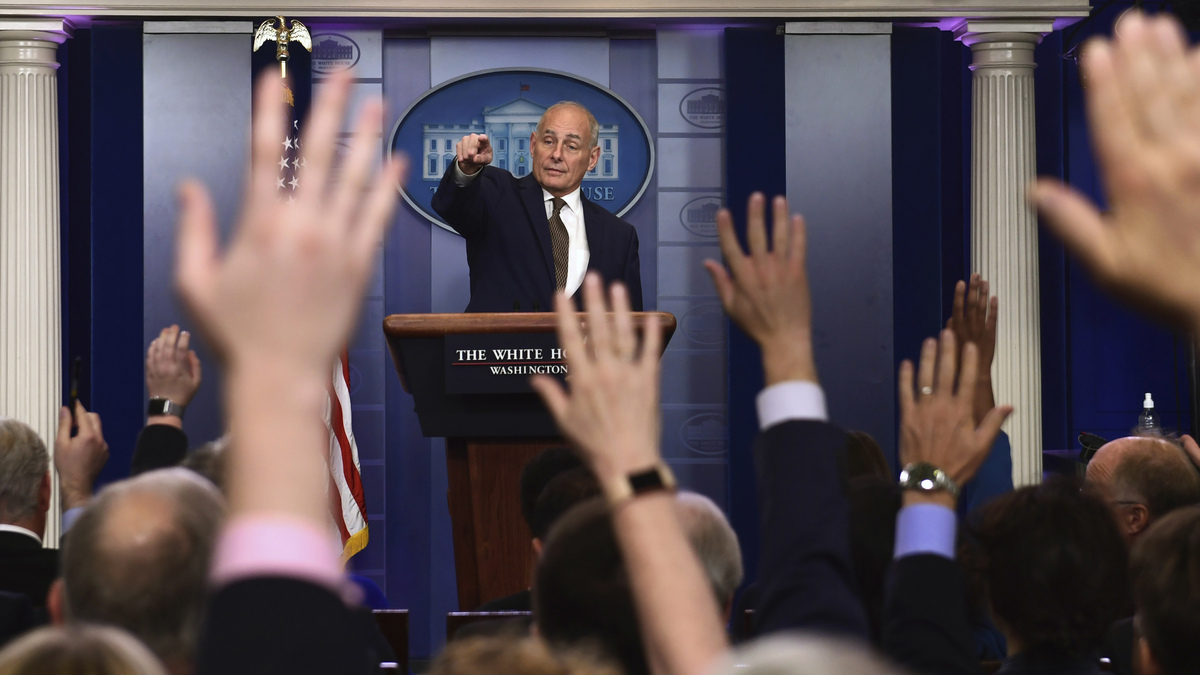 White House chief of staff John Kelly calls on a reporter during the daily briefing at the White House on Thursday.

White House chief of staff John Kelly made an unusual appearance at Thursday's daily press briefing to clear up a few things: He isn't going anywhere, he is not frustrated by President Trump's use of Twitter and he is not trying to micromanage the president.

"Although I read it all the time, pretty consistently, I'm not quitting today," Kelly said. "I don't believe — and I just talked to the president — I don't believe that I'm being fired today. And I'm not so frustrated in this job that I'm thinking of leaving."

There have been recent rumors and reports about the retired four-star Marine Corps general and the challenges of being Trump's chief of staff. Vanity Fair reported Wednesday that Kelly was "miserable in his job and is remaining out of a sense of duty to keep Trump from making some sort of disastrous decision." The same day, The Washington Post published a substantial profile of Thomas Barrack Jr., a longtime Trump friend and ally, who, the Post reported, is "mentioned as a potential White House chief of staff should Trump decide to choose a new one." Kelly was elevated to the post from homeland security secretary in July.

On Thursday, Kelly took to the briefing room lectern, with surprising ease, and spoke with journalists in an apparent effort to dispel the recent negative reporting and chatter about him and his management of the West Wing.

He called being chief of staff "the hardest job I've ever had" and admitted it wasn't the best one he has ever held — that would be his time as an enlisted Marine. "This is, in my view, the most important job I've ever had," Kelly added.

Kelly said he was brought into the West Wing to "put some organization into it," but not necessarily to try to control the president — or oversee an "adult day care center," as Sen. Bob Corker, R-Tenn., suggested over the weekend after Trump attacked him on Twitter.

"It's funny, I read in the paper, you all know you write it, that I've been a failure at controlling the president or controlling his tweeting," the White House chief of staff said. "I was not brought to this job to control anything but the flow of information to our president, so that he can make the best decisions."

Kelly also said he doesn't believe Trump's combative use of Twitter threatens his agenda, saying, "The president has a right to defend himself." That said, Kelly explained that when he personally has a disagreement or misunderstanding with a member of Congress while managing Trump's staff, he calls them up to talk about it.

Kelly described the president as "decisive," "thoughtful" and eager to receive "information in from every avenue he can receive it."

"I restrict no one, by the way, from going in to see him," Kelly continued. "But when we go in to see him now rather than onesies and twosies, we go in and help him collectively understand what he needs to understand to make these vital decisions. So again, I was not sent in, or brought in, to control him."

At times, Kelly has been caught looking upset during some of Trump's speeches. Photos circulated on social media during the president's controversial comments about the August violence Charlottesville, Va. — saying that there were "very fine people" on "both sides" of the clash between white nationalists and counterprotesters — of Kelly looking at the ground. And at Trump's speech last month before the U.N., Kelly had his head in his hands.

"The cameras always catch me when I'm thinking hard, and it looks like I'm frustrated and mad," Kelly explained Thursday.

When asked what frustrates the president, Kelly laughed and said he thought that it was the media.

"All of you," he told the White House press corps. "Not all of you, but many of you."

Kelly also addressed Trump's tweet Thursday morning that FEMA and other rescue workers couldn't be kept in hurricane-ravaged Puerto Rico "forever" and reiterated that the president believes the U.S. citizens there deserve the same support as those who were hit by hurricanes earlier this year in Texas and Florida.

"The minute you go anywhere as a first responder, and this would apply certainly to the military, you are trying very hard, working very hard, to work yourself out of a job," Kelly explained. "There will be a period in which, we hope sooner rather than later, to where the U.S. military and FEMA, generally speaking, can withdraw because then the government and the people of Puerto Rico are recovering sufficiently to start the process of rebuilding."

"Our country will stand with those American citizens in Puerto Rico until the job is done," Kelly reiterated.