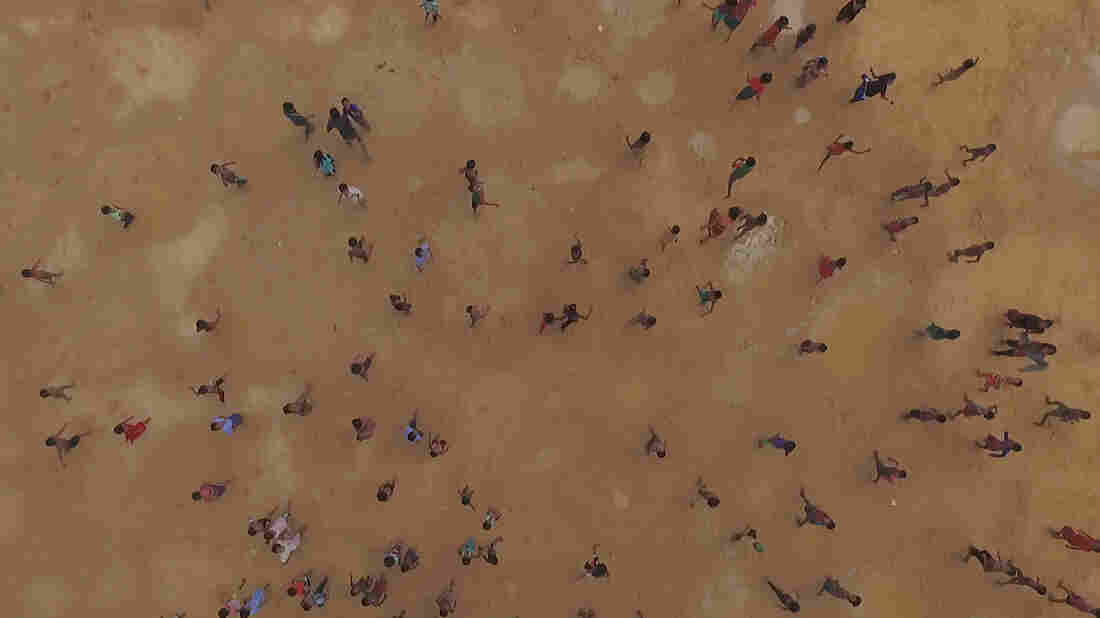 Human Flow is a documentary directed by Ai Weiwei that explores the everyday lives of people fleeing various conflicts around the world. Elevation Pictures hide caption 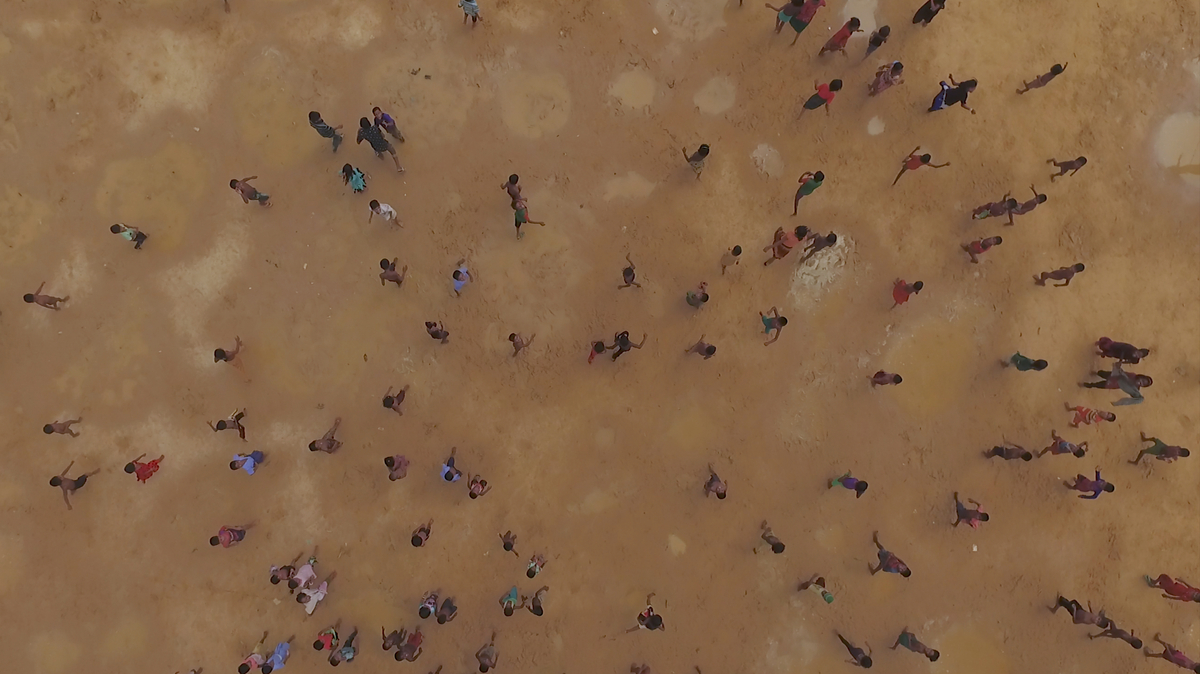 Human Flow is a documentary directed by Ai Weiwei that explores the everyday lives of people fleeing various conflicts around the world.

In a scene of startling beauty in Ai Weiwei's Human Flow, a group of refugees huddles together, with light bouncing off golden insulation blankets handed out by workers to warm them up as they arrive off a boat in Europe. Ai's work is often meant to provoke, but the shot isn't meant to plunder suffering for art's sake. It's a moment of noticing, in a gorgeous-looking documentary that never spares us the ugly, unspeakable miseries of forced migration. The film boasts no less than twelve cinematographers (among them the Chinese artist himself), which may be what it takes to track the planet's largest mass migration since World War II and its impact on Europe, the continent taking the brunt of absorbing (or not) refugees fleeing brutal wars around the globe.

Human Flow is structured by aerial shots of beautiful expanses of land and sea in the Middle East, Africa and parts of Asia where civil conflicts take their toll. Intended or not, these vistas — punctuated by silent pans through towns and cities reduced to rubble by repeat bombings — serve as a tacit reminder that those who left were driven out of homes they loved and not, as some have charged, that they seized the day to press for more prosperous lives. The shots from above make them look like massed ant colonies sailing across oceans, trudging through muddy fields in rain and sleet, milling around camps in Jordan, Turkey, Germany and France, with nothing but hope to sustain them.

We're then we're brought in close, to focus on individuals matter-of-factly recounting the horrors they endured at home, the new nations where they hope to settle (Germany, primarily), and their anguish at being stuck in transit camps with no certain exit. At times Ai frames them standing in their tents, gazing at the camera in a silent plea for us to own our collective responsibility for fellow humans in distress.

The film shows us how, one by one, European nations are scaling back, closing their borders or, in the case of the European Union in 2016, cutting a deal with Turkey that returned many thousands of people to camps in that country, where they languish without discernible futures. Expert talking heads from the United Nations and other relief agencies offer macro-explanations of the virtual collapse of a refugee management system that was geared to process individual asylum applications and now finds itself overwhelmed by sheer numbers.

When pulling back to global analysis, Human Flow skews to the familiar, scattershot and politically skimpy, stretching itself thin over the particular dilemmas of host countries with different political cultures. The film shows how Germany, perhaps the most organized and welcoming nation, grapples with the difficulties of absorbing mass populations overnight and keeping them occupied. Yet Ai devotes only cursory attention to the political and cultural divisions opening up among citizens of many European nations, fueled by fears stoked by nativists that their cultures will be engulfed.

Human Flow is at its most potent, and poignant, when it scales down to the human level. At over two hours long, the litany of pain and suffering can be numbing. Which may be why the director keeps popping into frame to help with food or cheer up a glum child, or, in one sequence, to exchange (presumably) fake passports with a young Middle Eastern man. The Chinese artist, an exile himself who now lives in Berlin and is currently mounting a controversial installation about walls and borders around New York City, is a genial, kindly and playful presence in Human Flow. Remarkably, given their almost unbearable stories of escape from privations of every kind and the uncertainties and difficulties of their current plight, the film's subjects, too, are remarkably docile and upbeat. The buoyant high spirits of children, always ready to play with available materials, are uplifting.

Yet given one of the film's grimmer statistics — the average time migrants spend in camps, we are told, is a shocking 26 years — Human Flow leaves us wondering what will become of this lost generation, stranded without home or schooling or work, if or when they run out of hope and turn to anger or despair.