Accessibility links
Trump Calls Iran Nuclear Deal 'Unacceptable,' But Leaves U.S. In It For Now "We will not continue down a path whose predictable conclusion is more violence, more terror and the very real threat of Iran's nuclear breakout," President Trump said on Friday. 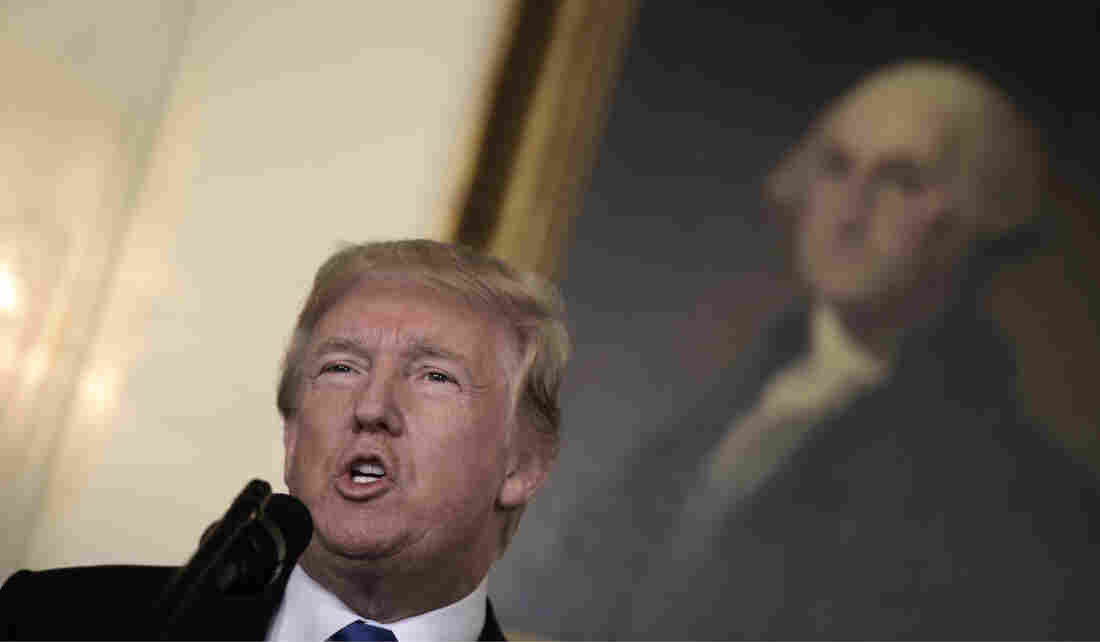 President Trump announces he will not recertify the Iran nuclear deal on Friday, ahead of Sunday's deadline. The deal is still in effect, but the president is pushing for a new strategy. Brendan Smialowski/AFP/Getty Images hide caption 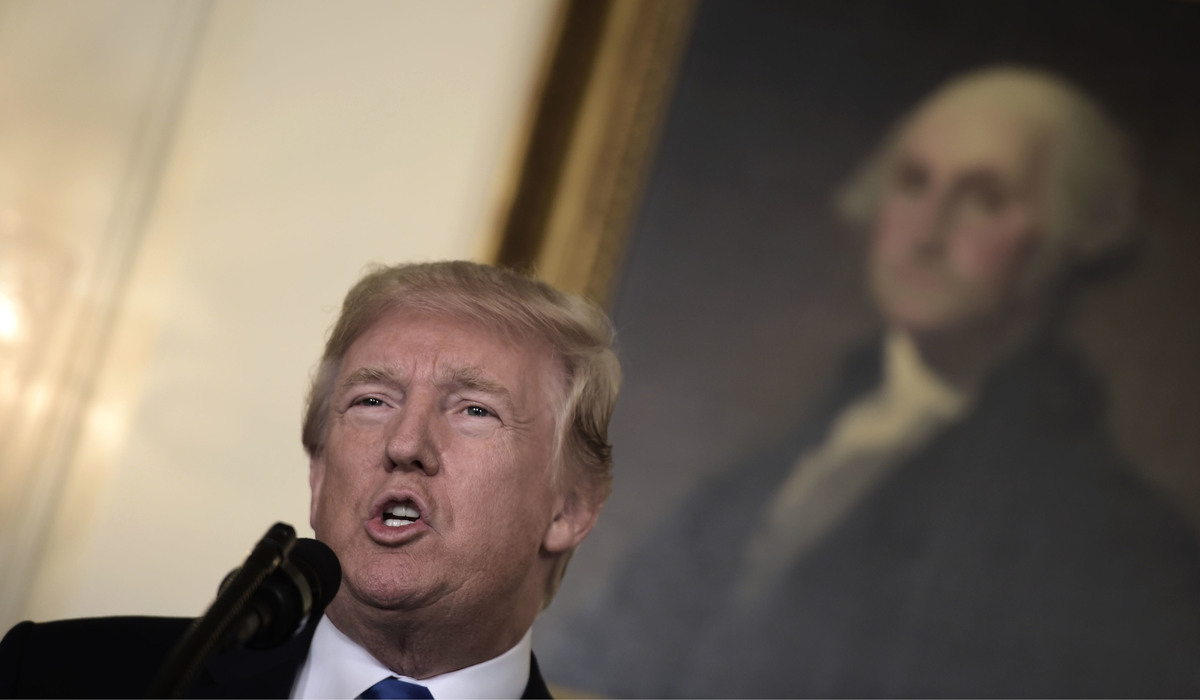 President Trump announces he will not recertify the Iran nuclear deal on Friday, ahead of Sunday's deadline. The deal is still in effect, but the president is pushing for a new strategy.

President Trump is striking a formal blow against the Iran nuclear deal. But he is stopping short of asking Congress to reimpose sanctions on Tehran. Instead, the president is urging lawmakers to pass a new law, spelling out conditions under which sanctions could be reimposed.

In a speech from the Diplomatic Reception Room at the White House, Trump said he is directing his administration "to work closely with Congress and our allies to address the deal's many serious flaws so that the Iranian regime can never threaten the world with nuclear weapons."

If that approach does not work, the president said, "then the agreement will be terminated." He noted that U.S. participation in the deal "can be canceled by me as president at any time."

While Trump has long criticized the nuclear deal as "an embarrassment," he has twice before reluctantly certified the agreement, acknowledging that Iran is in compliance with the nuclear deal and that the deal itself is in the U.S. national interest. Faced with a Sunday deadline, though, Trump is refusing to certify the deal for a third time.

What's Next For The Iran Nuclear Deal If President Trump Refuses To Recertify It?

"We cannot and will not make this certification," he said. "We will not continue down a path whose predictable conclusion is more violence, more terror and the very real threat of Iran's nuclear breakout."

Trump argued Iran is in violation of "the spirit" of the agreement, if not the actual terms, and questioned its value. "What is the purpose of a deal that at best only delays Iran's nuclear capability for a short period of time? This, as president of the United States, is unacceptable," Trump said in the Friday address.

In addition to offering tough words, Trump also directed the Treasury Department to impose new sanctions on Iran's Islamic Revolutionary Guard Corps for its destabilizing behavior in the region and support for terrorism. This is outside of the scope of the nuclear deal. Trump also encouraged allies to take similar actions imposing sanctions targeting the Iranian regime's ballistic missile program, which was not covered by the deal.

The International Atomic Energy Agency reiterated on Friday that Iran remains in compliance with the deal. "At present, Iran is subject to the world's most robust nuclear verification regime," IAEA Director General Yukiya Amano said in a statement.

In a briefing with reporters on Thursday, Secretary of State Rex Tillerson said, "We don't dispute that they're under technical compliance" with the deal. He suggested the president's decision is based on an assessment of Iran's overall conduct, balanced against the sanctions relief granted by the agreement.

By refusing to certify the deal, Tillerson said, the president hopes to signal to Tehran and other international players that it's time to come back to the bargaining table.

"This is the pathway we think provides us the best platform from which to attempt to fix this deal," Tillerson said.

He acknowledged that Iran is unlikely to reopen talks on the existing nuclear agreement but suggested the U.S. and its allies might be able to negotiate a follow-on deal that would pick up where the nuclear pact leaves off.

Trump is being encouraged to take a hard line against Iran by Sen. Tom Cotton, R-Ark., an early and outspoken opponent of the nuclear agreement.

"The deal and the status quo are most certainly not in our vital national security interests," Cotton told the Council on Foreign Relations. "The world needs to know we're serious, we're willing to walk away, and we're willing to reimpose sanctions and a lot more than that. And they'll know that when the president declines to certify the deal, and not before."

Cotton's criticism is at odds with some members of the president's own national security team.

Defense Secretary Jim Mattis, for example, told the Senate Armed Services Committee on Oct. 3 that preserving the nuclear deal is in the U.S. interest.

Ben Rhodes, former adviser to President Barack Obama, tweeted Friday that "violating the Iran Deal at a time when Iran is complying" is "provoking crisis."

Trump is demanding that allies and Congress go along with him in violating the Iran Deal at a time when Iran is complying. Provoking crisis

Opponents of the agreement complain that even if it's working to limit Iran's nuclear capabilities, it hasn't stopped the country from supporting Hamas and Hezbollah or making mischief in other ways.

Decertification opens a 60-day window in which Congress could use a fast-track process to reimpose the economic sanctions on Iran that were relaxed under the nuclear agreement.

Veteran Middle East diplomat Dennis Ross says the administration is gambling that other parties to the agreement would use that time to hammer out a new deal.

"This is a statement. It's a symbol that we mean what we say and therefore you better get serious about responding to us," said Ross, now at the Washington Institute for Near East Policy. "It's basically a strategy that's guided by the idea that the Europeans are so desperate to keep us in the deal that they'll work to respond to us."

6 Things You Should Know About The Iran Nuclear Deal

It's a risky strategy on two fronts.

European leaders, already unhappy with the Trump administration for backing out of the Paris climate accord, may be unwilling to play along, leaving the U.S. isolated.

"If this is presented as, 'We're walking away and that's sort of the end of the story,' well, then I think we will be alone," Ross said.

Germany, France and Britain have all reaffirmed their commitment to the nuclear deal, as have the other signatories, China and Russia.

"It's the first step toward withdrawing from the agreement keeping Iran from building the bomb," he added. "Our allies and adversaries alike will see this as a signal that the United States doesn't live up to our commitments, making the United States a source of uncertainty instead of a force for solving serious problems."

Trump's ambassador to the United Nations has said the president is not concerned with international opinion.

"It has never moved the U.S. to care about what other countries say," Nikki Haley told reporters in September. "What does move the president is: Are we doing everything in the best interest — security interest — for the American people? And that's what you're seeing is playing out."

Another danger for the decertification-as-bargaining-chip strategy is that Congress could actually exercise its option to reimpose sanctions right away — which would amount to a breach of the agreement by the United States.

Tillerson said the administration had been quietly lobbying lawmakers for weeks to choose a middle path — preserving sanctions relief for now but signaling tough new sanctions if Iran fails to clean up its act.

"I don't want to suggest to you this is a slam dunk up there on the Hill. We know it's not," Tillerson said. "This is a bit of a complicated issue."

Supporters of the nuclear deal, both inside and outside the U.S., are now focusing on Congress in an effort to preserve the agreement.

"The facts are clear: The Iran nuclear agreement is working as intended," Jeremy Ben-Ami, president of the moderate pro-Israel group J Street, said in a statement on Oct. 6. "The president is acting based on his own personal political agenda, distaste for diplomacy, and contempt for his predecessor. Congress should see this decision for what it is: a reckless mistake that makes it harder, not easier, to confront Iran and prevent it from obtaining nuclear weapons."

The U.N. ambassador also dismissed the argument that backing out of the Iran deal would make it harder to reach a diplomatic solution with North Korea, for example.

"It does not undermine U.S. credibility," Haley told reporters. "Just because there was some agreement that was agreed to — the smartest thing any country can do is go back and look at it and say, 'Is it working?' Not have too much pride to say, 'Oh, I signed it. I have to continue to be its cheerleader.' Is it working?"

The lifting of sanctions under the nuclear deal has already been a boon for some U.S. businesses. Boeing, for example, has inked deals to sell Iran jetliners worth nearly $20 billion. The potential for growing economic ties is one reason the deal's opponents are eager to move quickly.

There are some signs that Iran is feeling the pressure from the president's decision. Reuters reports that Iran signaled its willingness at the U.N. General Assembly in September to open talks with the other parties to the nuclear deal over its ballistic missile program.