Accessibility links
Thousands Of Puerto Ricans Flock to Florida After Hurricane Maria With more than 80 percent of people still without power in Puerto Rico, thousands are pouring out of the island to find relief on the mainland.

'Get Us Out Of Here': Amid Broken Infrastructure, Puerto Ricans Flee To Florida

'Get Us Out Of Here': Amid Broken Infrastructure, Puerto Ricans Flee To Florida 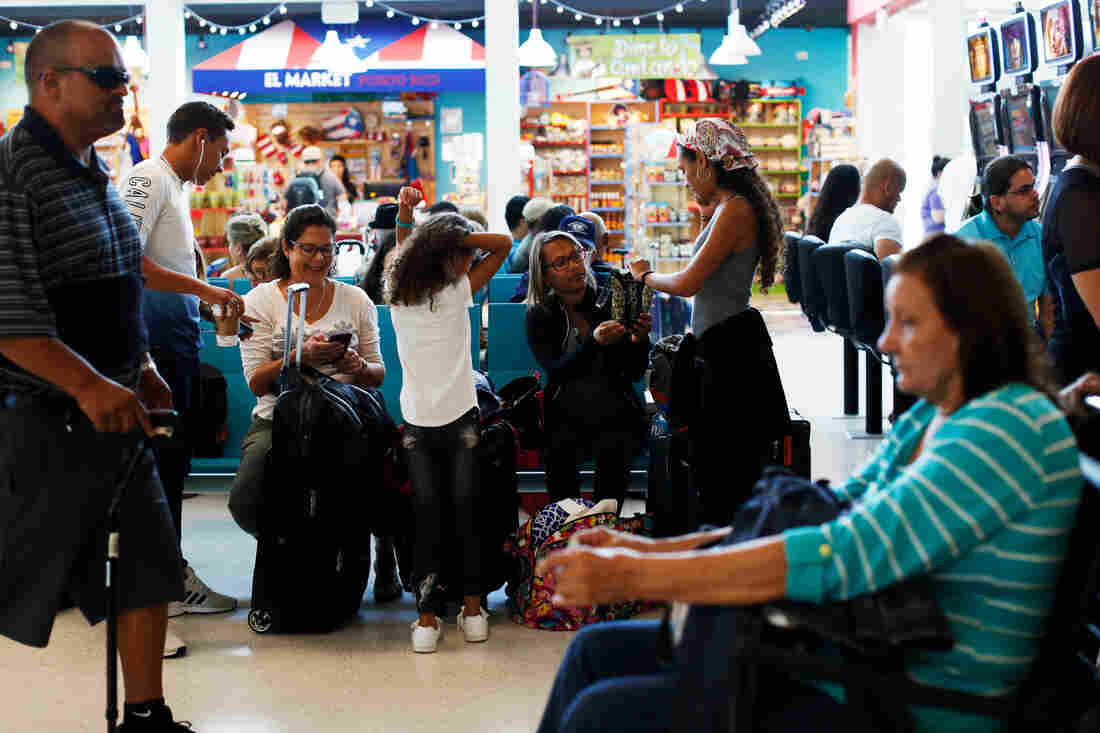 Glisela Vega Rivera and her three children wait to board a flight to Miami. Thousands of Puerto Ricans have poured into Florida after Hurricane Maria. More than 27,000 have arrived through Port Everglades and the Miami and Orlando airports alone since Oct. 3, according to the governor's office. Elissa Nadworny/NPR hide caption 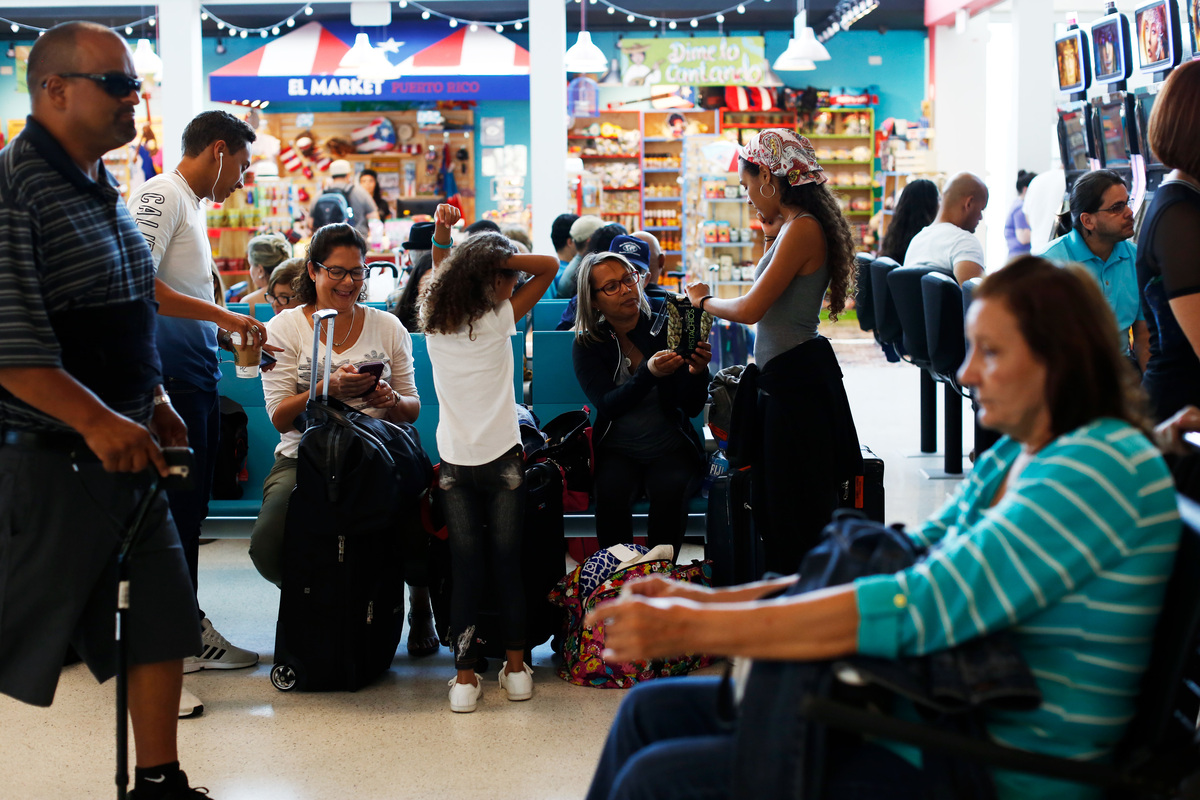 Glisela Vega Rivera and her three children wait to board a flight to Miami. Thousands of Puerto Ricans have poured into Florida after Hurricane Maria. More than 27,000 have arrived through Port Everglades and the Miami and Orlando airports alone since Oct. 3, according to the governor's office.

Luis Cruz and Esther Gomez had always considered moving to Florida from Puerto Rico. The weather and proximity made it an ideal destination; plus, the couple had family scattered across the state. They just didn't know when they'd take the big step.

Then Hurricane Maria hit. Three weeks after the storm wiped out the island's power grid, less than 20 percent of people have electricity and 64 percent have drinking water.

Though their apartment in Humacao was intact, much of the infrastructure throughout the municipality was damaged, including the school their three children attended, where Gomez was also a teacher.

"We thought 'What now? What can we offer our kids under these conditions?' It didn't look promising. So we took the step," Cruz said.

Cruz used a borrowed satellite phone to call a friend in central Florida.

"My literal words to him were, 'Get us out of here,' " he recalled.

Thousands of Puerto Ricans have poured into Florida after Hurricane Maria. More than 27,000 have arrived through Port Everglades and the Miami and Orlando airports alone since Oct. 3, according to the governor's office. Some will stay temporarily, until power and water are largely restored across the island; but many, like Cruz and his family, are coming to the sunshine state to rebuild their lives.

The Federal Emergency Management Agency has almost 600 staffers working at Disaster Relief Centers to assist hurricane victims in need arriving in Fort Lauderdale, Orlando and Miami. There, organizations including the Red Cross and Catholic Charities are working alongside FEMA to provide people with food resources, counseling, medical attention and employment information, among other services.

Fernando De la Vega and his family landed in Miami, but they were lucky to even find an open flight off the island, he said. Vega, who had been without power in Guaynabo since Hurricane Irma, was concerned for the health and well being of his two daughters; one has special needs and the other is pregnant. Until conditions improve, they'll likely stay in Miami.

"Ultimately, something clicked in my head and I said 'We need to get out of here, at least temporarily,'" he said.

Enid Olivieri, also from Guaynabo, booked one flight that was canceled, and wasn't able to communicate with her sister in Virginia over the phone to book another. Eventually, she was able to leave with her aunt, uncle and mother on a relief flight for the elderly and people with medical needs to Fort Lauderdale before heading to Virginia.

It's very difficult to uproot yourself and come here, but we see no choice.

"It's very difficult to uproot yourself and come here, but we see no choice," she said. Olivieri, who has apnea, uses a machine at night to help her breathe. When she lost power, she and her husband moved around a lot, staying in hotels and with relatives who had electricity so she could sleep at night. But it wasn't a permanent fix.

"My husband told me, 'You have to leave. You call your sister, and you have to leave.' So I left," she said. Olivieri's husband will fly to the states in a couple of weeks.

Many Puerto Ricans, like Cruz and his family, have been able to connect with family or friends in Florida for help. Over the last three decades, the state has become a magnet for people leaving the island — about one million Puerto Ricans live there today, and the number of people moving to the mainland continues to climb.

"Central Florida, particularly Orlando, has become the mecca for migrants from the island," said Luis Martinez-Fernandez, a history professor at the University of Central Florida who has researched Puerto Rican migration to the state.

Roughly 80,000 people moved to the U.S. from the island per year in the last two years. That's up from just five years ago, when closer to 50,000 people were migrating per year. Fernandez attributes the increase to the mounting unrest among residents as federal appointees reckon with the island's financial crisis, with their decisions often dealing blows to the workforce.

"The signals that this body has been sending are signals of major austerity," Fernandez said. "They're pushing the government to reduce the state workforce dramatically in the next couple of years. These discussions have pushed many Puerto Ricans over the edge, making them decide to come to central Florida."

For many who were on the fence about leaving, the effects of the hurricane — potential months-long power outages, extensive infrastructure destruction, limited resources and aid — will be the breaking point. Some anticipate residents will head to the U.S. in droves.

With the potential for thousands of new voters who tend to lean Democratic, Fernandez also notes that large Puerto Rican migration to the state could have political ramifications in future Florida elections.

Officials in Florida are already preparing for an influx of students in schools. The Department of Education temporarily waived regulations to allow Puerto Rican students without access to their education records to enroll in public schools. Additionally, almost 40 colleges and universities across the state have waived out-of-state tuition and fees for students displaced by the hurricane.

Three days after Cruz and his family settled in at a friend's house in Florida, his children were attending their first day of classes at a public high school north of Orlando.

They've been in Florida just over a week, and Cruz and his wife are slowly putting together the pieces to reassemble their lives. They've gotten their driver's licenses; they're in contact with a shipping company to bring at least one of their cars to the state; they're looking for a place to live.