Accessibility links
Why It Will Be Tough To Hold Hotel Legally Responsible For The Vegas Shooting "A lot of these people who suffered through the night of October 1 want answers," says one attorney. But previous cases meant to hold venues or gun manufacturers accountable have gone nowhere. 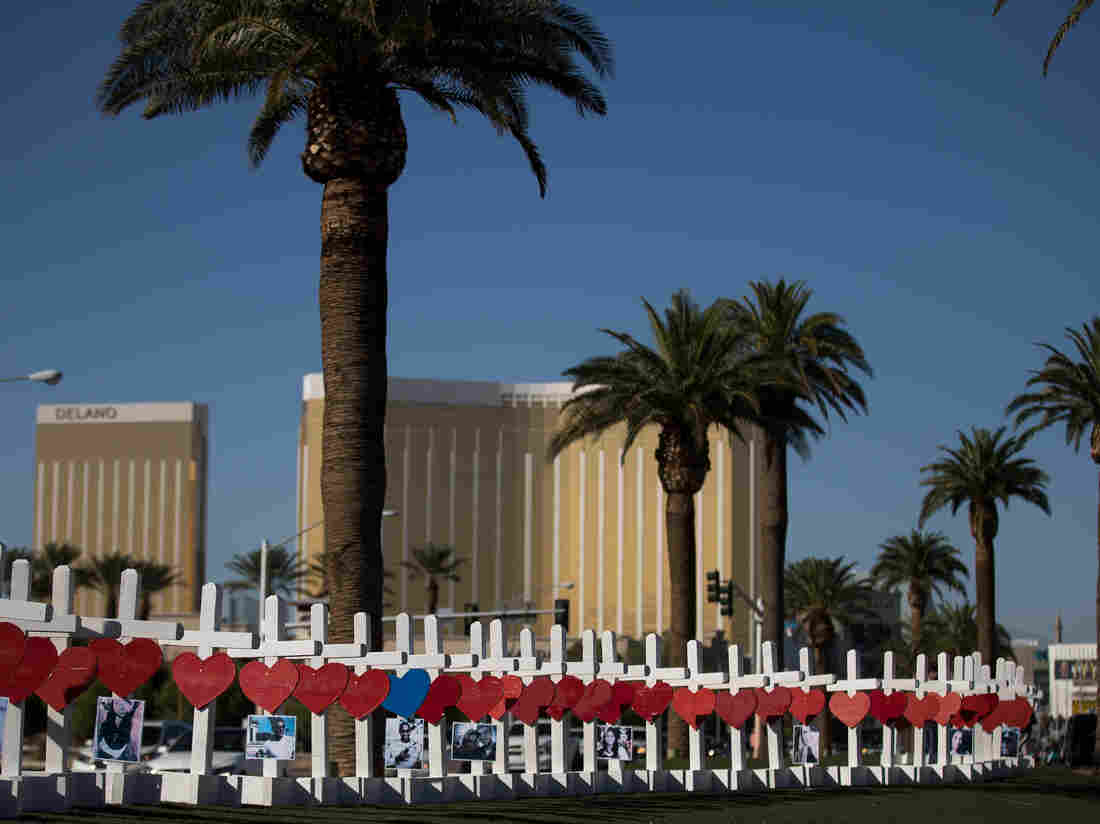 With the Mandalay Bay Resort and Casino in the background, white crosses for the victims of the Las Vegas massacre stand on the south end of the Las Vegas Strip. Drew Angerer/Getty Images hide caption 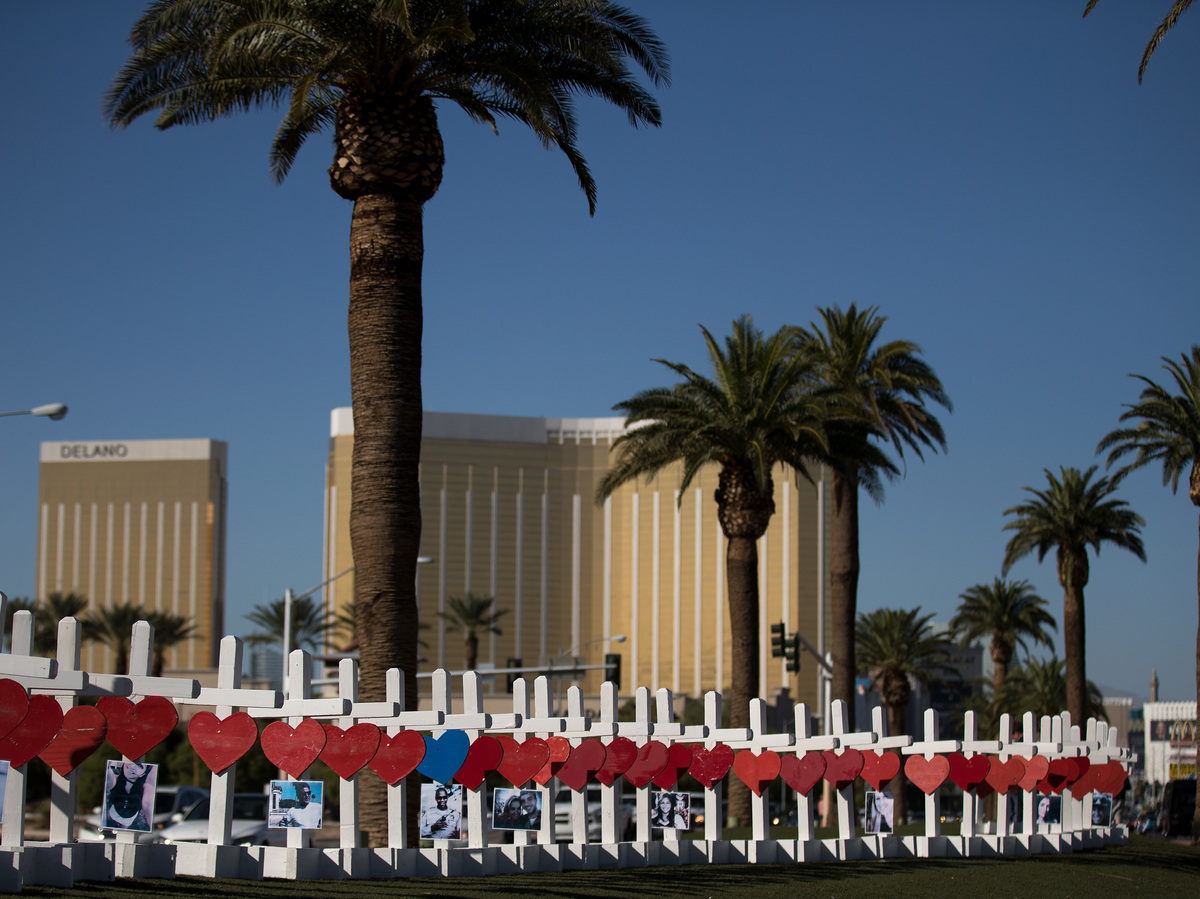 Lawsuits are starting to be filed on behalf of victims of the Las Vegas massacre, even as recent history shows victims of mass shootings face an uphill battle with such challenges.

The first negligence lawsuit naming the hotel company itself was filed on behalf of 21-year-old victim Paige Gasper, who suffered life-threatening injuries when a bullet lacerated her liver and broke her ribs.

The attack at a country music festival at the Mandalay Bay resort last Sunday killed 58 people and injured hundreds more. In the days since, there have been contradicting accounts between MGM Resorts, which owns the hotel, and the authorities over how long it took for police to be called.

"Paige wants answers, a lot of these people who suffered through the night of October 1 want answers," said Michelle Tuegel, one of Gasper's attorneys.

In addition to the hotel, the lawsuit targets the concert venue and manufacturers of so-called bump stocks that the gunman used, devices that convert semi-automatic weapons to fully automatic ones.

More lawsuits against the hotel and venue are likely, legal experts say. There are still questions about how the gunman could walk through this bustling casino lobby fortified with security cameras, and raise no suspicions as he amassed an arsenal in his luxury suite.

Earlier this week, police also changed their timeline, pointing to a six-minute gap between when a hotel security guard was shot, and police were called. In a statement, MGM called that account "not accurate," saying shots were fired on concertgoers "within 40 seconds" of when their security guard was injured.

Still, if recent mass shootings are any indication, proving negligence in cases that target venues is difficult, according to Tom Russell, a personal injury lawyer and law professor at the University of Denver.

"One would have to show that the hotel had knowledge about this of some sort and they disregarded it," Russell said. "It would require that level of knowledge."

One of the most high profile – and only – recent related cases occurred in Russell's backyard, following the Aurora movie theater massacre in 2012. Victims tried to sue the theater chain, Cinemark. They lost, and were even ordered to pay the company's legal fees. Russell says venues themselves can often be victims too, in the form of lost business and other harm.

"One can't blame the hotel for not predicting that this gunman would go up to their 32nd floor with an arsenal and break out the windows and start firing at people," Russell says.

Still, as entertainment venues are increasingly targets for attacks, legal experts predict they'll also be subject to more lawsuits, and the law could be tested. There's another big reason for this becoming the new frontline. Georgetown Law Professor Heidi Li Feldman says that after mass shootings, most notably the 2012 shooting rampage in Sandy Hook, Conn., lawsuits against the gun industry tend to go nowhere.

"The bottom line is that, it's not only difficult, it was Congress's specific intent to make it difficult," Feldman says.

Laws like the Protection of Lawful Commerce in Arms Act passed as recently as 2005 broadly exempt the gun industry from any tort lawsuits when criminals use their products. Meanwhile some victims, as in one motion already filed in Las Vegas, go after the gunman's assets. But even if they win, there's rarely enough money to go around.

"It creates a hornet's nest for any plaintiff who even tries to bring suit in a situation like this," Feldman says.

One thing is clear. Las Vegas is still reeling 12 days after the worst mass shooting in modern American history. Eglet expects his firm will represent numerous victims in soon-to-be-filed cases, and says gun owners like him see the conversation is starting to change after October 1.

"The machine gun which is essentially what it turns these rifles into, is meant for one purpose, it was designed for war, it was designed to inflict as many casualties as possible," Eglet says.

Eglet says the reason most cases against the gun industry don't win is because they never make it to trial, they're usually dismissed early on. He thinks his case will because he's challenging whether bump stocks enjoy the same protections under federal gun laws like the National Firearms Act.

Meanwhile, police say they're still studying the weapons used and the timeline, and hope to make more details public soon.