Accessibility links
Sen. Susan Collins Won't Run For Governor Of Maine, Will Remain In U.S. Senate While Collins would have been a front-runner in a race for governor, her centrist style had turned some Republicans against her and she might have faced a tough primary. 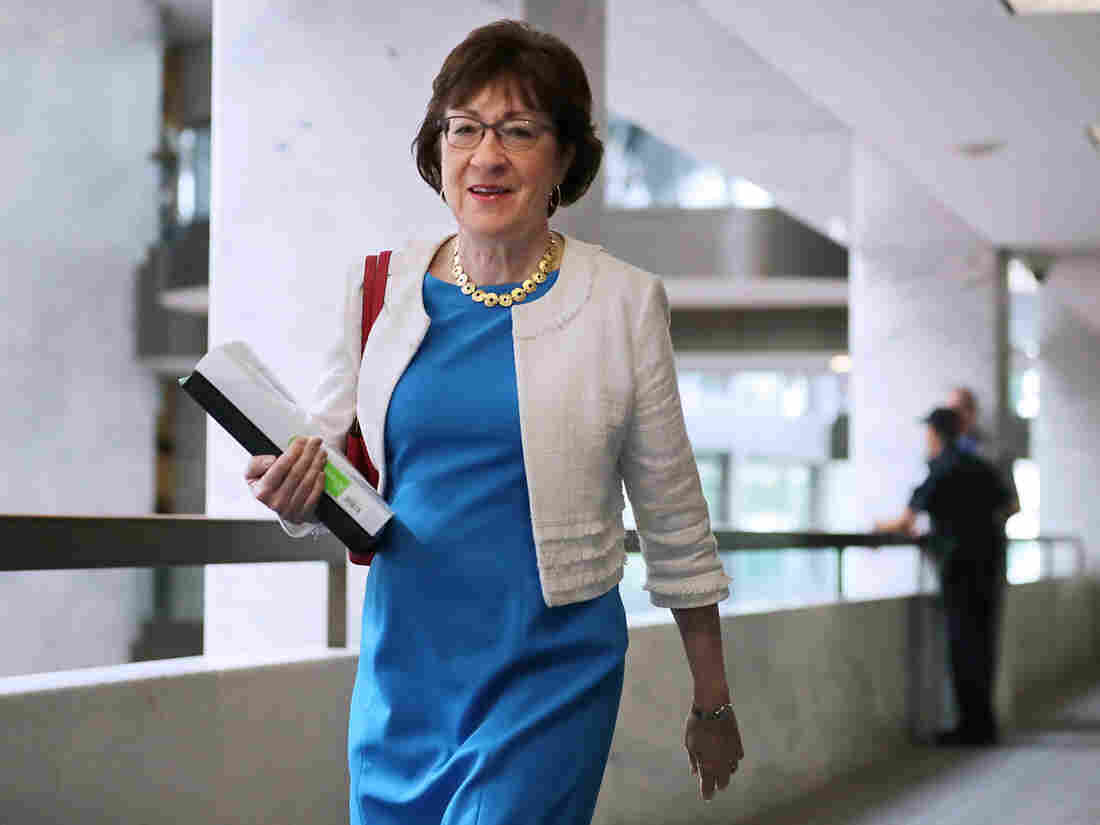 Sen. Susan Collins, R-Maine, announced Friday that she plans to remain in the Senate rather than run to be Maine's next governor. Chip Somodevilla/Getty Images hide caption 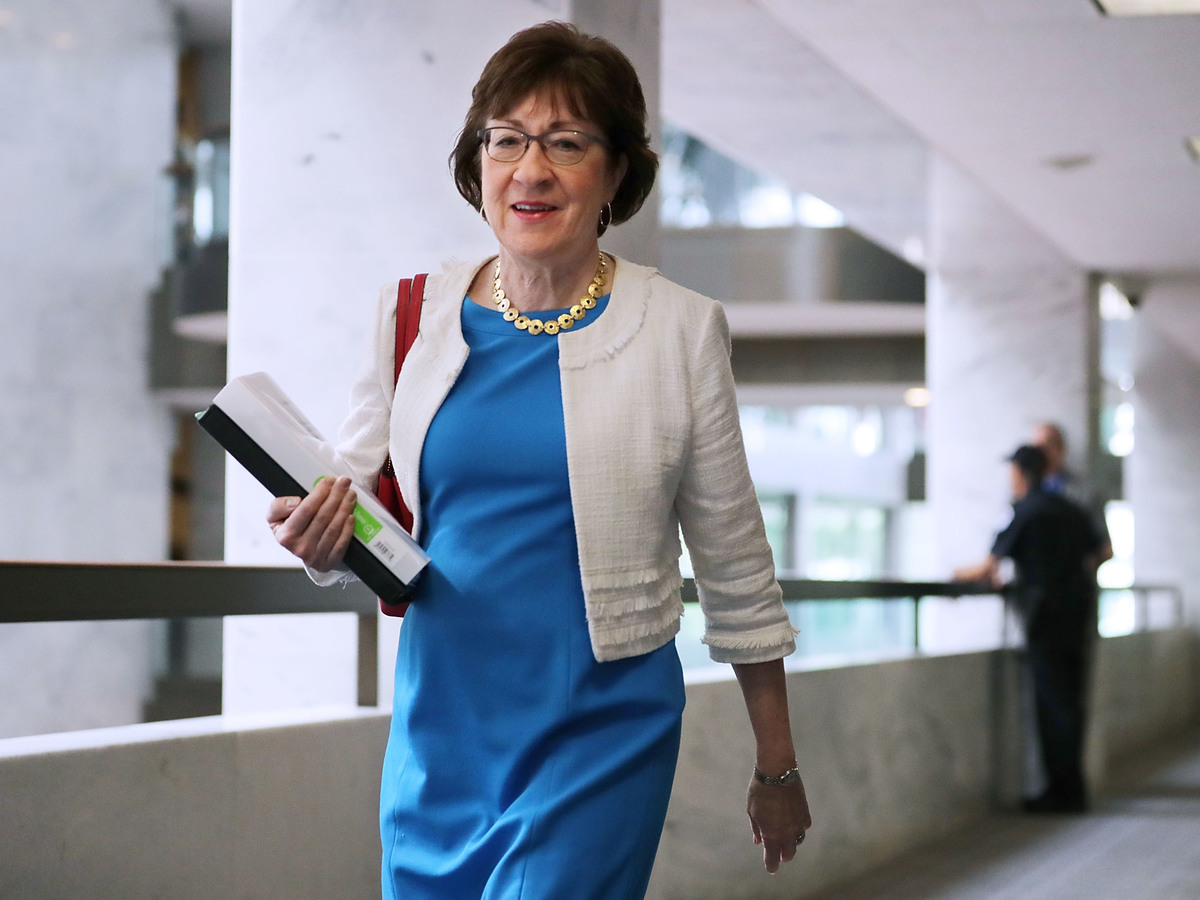 Sen. Susan Collins, R-Maine, announced Friday that she plans to remain in the Senate rather than run to be Maine's next governor.

Susan Collins, one of the few remaining centrist Republicans in the U.S. Senate, has decided to stay in that polarized body rather than run for governor of Maine.

Collins told a crowd of roughly 100 business leaders and a throng of local and national media at the Samoset Resort in Rockport, Maine, on Friday that she will not seek the Republican nomination to run for governor next year. Instead, Collins said she will remain in the Senate at least until her current term ends in 2020.

"This decision has not been any easy one. Ultimately, I've been guided by my sense of where I can do the most good for Maine and the nation," she said.

She added, "I have concluded that the best way I can contribute to these priorities is to remain a member of the Senate."

Collins' announcement was met with a standing ovation.

Her announcement ends widespread speculation that the 20-year veteran of the Senate would return to Maine and seek to finish her political career in the governor's mansion — a position denied to her in 1994 when she finished third in a five-person race. Such a move would also have sent shock waves through the Senate, jeopardizing the GOP's chances of holding her seat after her term ends in 2020 and marking another defection from the Senate Republican conference amid the populist uprising fueled by President Trump and his allies.

Prior to her announcement on Friday, Collins, 64, seemed genuinely conflicted about a gubernatorial bid. Joining the race would have given her the chance to become Maine's first female governor and avenge her only electoral defeat. Additionally, Collins would have control of the state bureaucracy, potentially using it and the bully pulpit of the governor's office to advance a policy agenda to work on initiatives that could improve Maine's economic outlook.

Collins has won her Senate contests by large margins, including by more than 36 points in 2014, by drawing support across the political spectrum. She would have been the clear front-runner in a governor's race currently filled with lesser-known candidates.

But a gubernatorial bid by Collins would also have been risky — the biggest threat coming from within her own party. While Collins remains one of the most popular senators in the country, her support among a Republican Party apparatus aligned with hard-liners like Gov. Paul LePage appears to be on the decline.

Recent opinion polls released by partisan sources have offered conflicting evidence of how Collins would fare in a Republican primary contest. But there is little question that LePage would have opposed her even though she twice supported his bids to take, and keep, the governor's office.

LePage has repeatedly bashed Collins, declaring nearly a year ago that "she's done in the Republican Party" because she refused to support Trump. The governor has since used his weekly radio addresses and conservative radio appearances to berate Collins over her opposition to two controversial bills repealing the Affordable Care Act, also known as Obamacare.

LePage's style and ideological bent is in sharp contrast with the more pragmatic, measured Collins. Nonetheless, he has fundamentally altered the state's political landscape, punishing Democrats and Republicans alike with rhetoric and deeds.

A Collins governorship could have arguably reversed that trend. Prior to her announcement, she said she wanted to "heal Maine," a comment read by some as a swipe at LePage's polarizing style.

Speaking to reporters after the event, Collins said LePage's repeated criticism neither bothered her nor did it influence her decision.

However, she said the issue confronting Congress "were so big" — from the ongoing investigation into Russian interference in the 2016 election to the cost of health care.

"I really just thought I could do most good for Maine and the nation in the Senate," she said.

Collins' decision was praised by fellow senators. Senate Majority Leader Mitch McConnell said in a statement that she "fights fiercely for her constituents. She brings conviction, smarts and leadership to every issue."

Some of the attendees were surprised at her decision, including Ginny Ciraldo of Lincolnville.

"Well, I thought maybe she wants to stay closer to home, maybe there's a lot of unrest," she said. "Maybe it's very stressful, but I am happy. I think she'll do a lot more for the people of the country, of course, in Washington."