Accessibility links
'Lady Killers:' Cherchez La Femme Fatale An FBI investigator once famously said "There are no female serial killers," but Tori Telfer sets out to prove him wrong with this gruesome new account of multiply-murderous women throughout history. 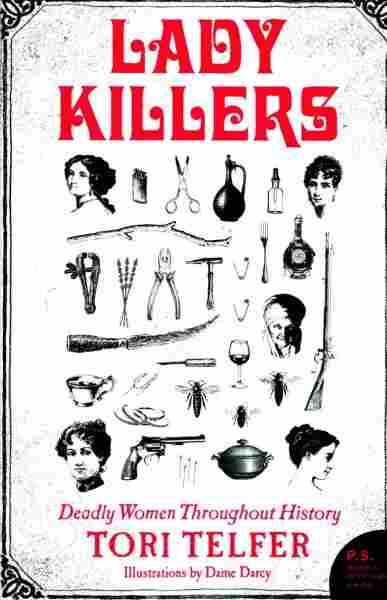 If I were a cheerier feminist — an upbeat, jolly, devil-may-care sort of feminist — I believe I would fall in love with this book. Lady Killers: Deadly Women Throughout History would take its place alongside works about other exceptional females on my bookshelf, gynocentric efforts about Calamity Jane, Queen Boadicea, or Lady Jane Grey, who lost her head after only nine days on the English throne.

But instead, I approached Tori Telfer's account of serial slaughterers with a bit of trepidation. Could this debut author deliver the "bloodcurdling, insightful, and irresistible journey" her book jacket promises? When the Saw franchise thrills millions, such a thing could be, well, a thing.

Men are far more likely than women to be killers. The title of the book is itself a grim pun: The phrase "ladykillers," of course, most often applies to men, though Telfer does her gruesome best to even up the body count. Could she convince me that documenting women who kill and kill again is a kind of feminist exercise?

For a long time, the received wisdom had it that female serial killers did not actually exist. The skimpy literature on the subject touted Aileen Wuornos (played by Charlize Theron in the 2003 movie Monster) as America's very first and only example of the species. Like female rocket scientists and cage fighters, lady killers had to wait for the new millennium to be properly recognized. With selections that are exceptionally well sourced, Lady Killers profiles more than 14 subjects with widely differing motivations for ending multiple lives. Cherchez la femme fatale.

Among others, we trace the story of the "the self-made widow" Nanny Doss, fond of baking cakes and doing away with husbands. A 1950s newspaper headline crowed, "Tulsa Grandma Charmed 'Em, Poisoned 'Em." Darker still is the career of Erzebet Bathory, a Hungarian royal who in the 16th century tortured and killed "nubile peasant children with strong, expendable bodies — and when she was finished with them, she flung them back over the castle walls to be eaten by wolves," although, she adds, "With so many vanished centuries between her life and ours, we may never get definitive, forensic proof of her guilt."

Poison is a girl's best friend in these accounts. It was easy for a home cook to stir the stuff into food, and for a long time things like arsenic and strychnine were readily available, even at drug stores. The resulting agony could be attributed to other dire illnesses. But it's not as easy as it looks, writes Telfer.

"You need to look into your victim's trusting eyes day after day as you slowly snuff out their life," she states. "You have to play the role of nurse or parent or lover while you sustain your murderous intent at a pitch that would be unbearable for many of those who've shot a gun or swung a sword. You've got to mop up your victim's vomit and act sympathetic when they beg for water." She almost makes you feel sorry for the poor put-upon poisoner.

Telfer not only tells a convincingly creepy story, she gives each case a cultural context, explaining what would drive a woman to this particular kind of madness.

Telfer not only tells a convincingly creepy story, she gives each case a cultural context, explaining what would drive a woman to this particular kind of madness. The murderess rarely had close friends, she explains. Constrained circumstances make men and women both go blood simple, with homicide as a deadly form of gold digging. More philosophically, Telfer invokes the French term mise en abyme, translated as "placed in an abyss," which evokes the hall-of-mirrors disorientation that marks the typical lady killer's psyche.

The author also explores the reasons why many of us find it hard to confront the reality of women who murder multiple times. We clothe them in the colors of the vixen or the witch. Perhaps not surprisingly, lookers tend to get a pass from juries, a la the pair of marcel-haired husband-killers who inspired Chicago, "Stylish Belva" Gaertner and "Beautiful Beulah" Annan. The illustrations in the book, by the well-known goth cartoonist Dame Darcy, lend a soulful piquancy to the enterprise.

As a frequent magazine and web contributor, Telfer knows her way around a pop phrase. Her work is bracingly non-stuffy, with a tone similar to that of Mary Roach's Stiff. Lady Killers most definitely entertains. Still, I felt my "oogie" buttons being pushed, as Annie Wilkes, the nurse-killer of Stephen King's Misery would say. Upon realizing the real consequences of the macabre actions so breezily depicted, performed by members of my own sex, I couldn't shake the thought that taking a life is really never amusing.