Accessibility links
In 'Beside Bowie,' Sideman Mick Ronson Takes The Foreground A new documentary argues that David Bowie might not have become the global megastar we knew were it not for his partnership with guitarist, producer and arranger Mick Ronson. 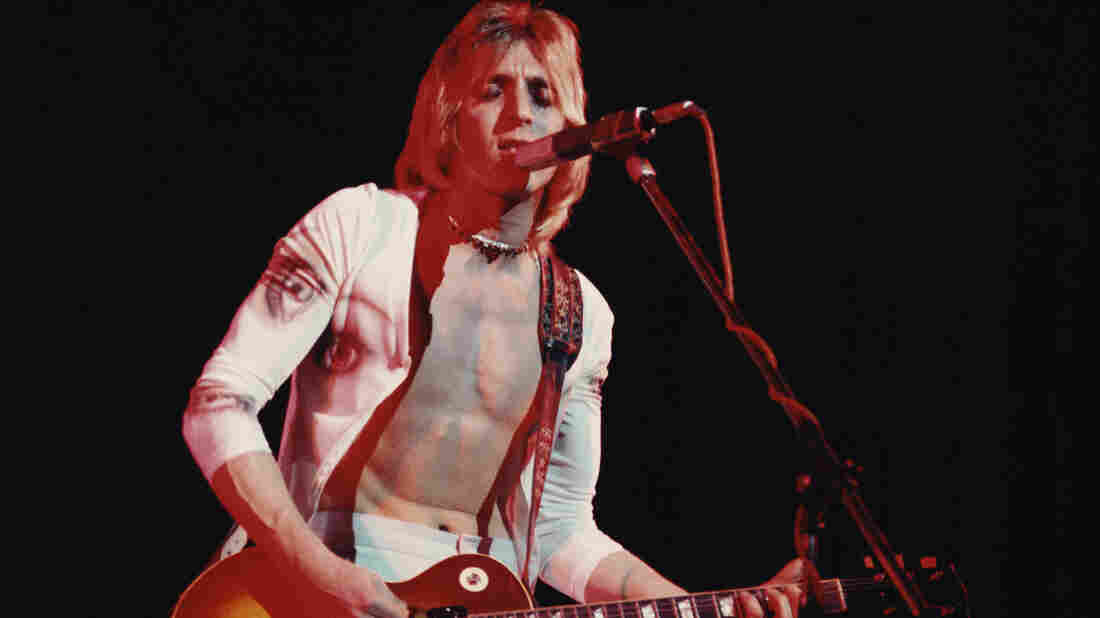 Mick Ronson onstage in 1975. Filmmaker John Brewer hopes his documentary Beside Bowie will earn the late guitarist a place in the rock and roll canon. Michael Putland/Getty Images hide caption 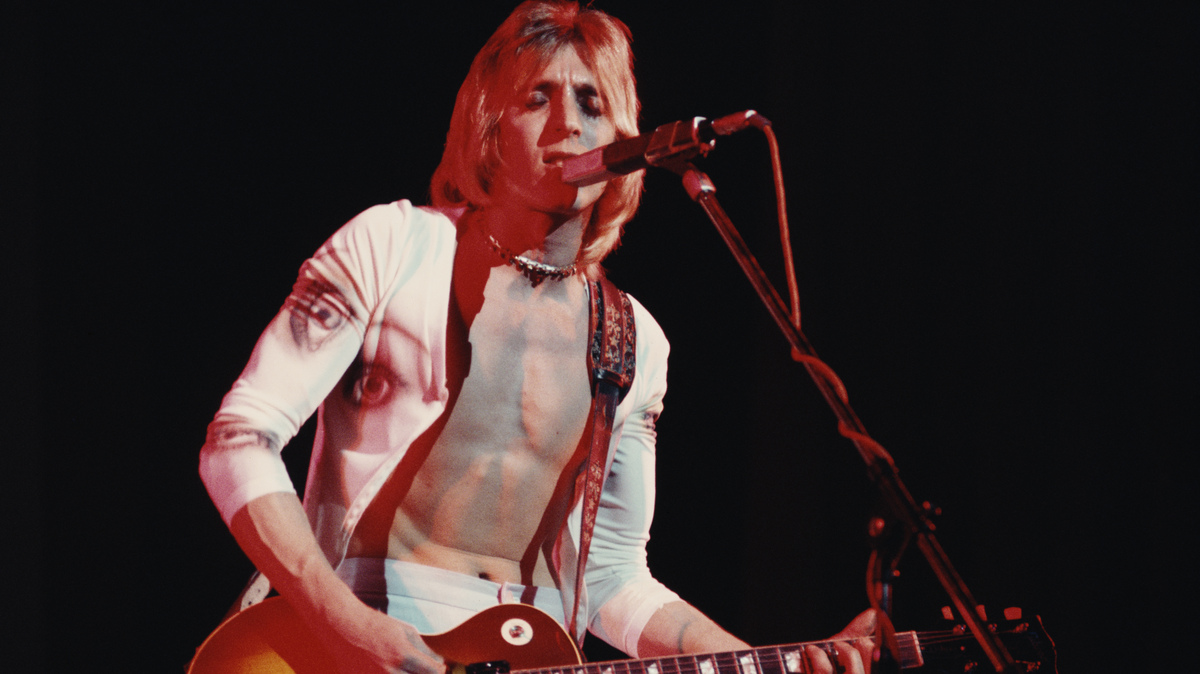 Mick Ronson onstage in 1975. Filmmaker John Brewer hopes his documentary Beside Bowie will earn the late guitarist a place in the rock and roll canon.

A new documentary film celebrates the life of the late guitarist Mick Ronson. Never heard of him? Starting in 1969, he was David Bowie's onstage and in-studio foil, arranger and co-producer. The film, called Beside Bowie, makes the case that Ronson deserves equal credit for Bowie's rise to superstardom — but never got it before his death from liver cancer in 1993.

The very first voice you hear in the film belongs to David Bowie — it's a voice-over he recorded for the documentary before his death last year. Bowie describes his first encounter with his future sidekick in the film Ziggy Stardust and the Spiders from Mars.

"I started playing some of my songs on a 12-string, and he plugged in his Gibson," he says. "And even though he was playing at a very low volume, the energy and grit cut through the room and he immediately established himself as a very well-defined player."

There was a natural synergy between them, according to just about everyone who appears in the film. Ronson's widow, Suzi, argues that the bond was even stronger: that her late husband and Bowie were two halves of a musical whole.

"There's just not one without the other. There never was," she says in the film. "Those five records, all those tours — that was Mick and David [in] combination, just like Keith and Mick or The Who."

Ronson was born and raised in Hull, a port town in the North East of England. He made a name for himself as Hull's answer to Jeff Beck, but kept his day job as a landscaper for the city government. A former bandmate convinced Bowie to hire Ronson. In the film, producer Tony Visconti remembers recording the future superstar's third album, The Man Who Sold the World.

"What I didn't realize was that Mick was a trained pianist and he studied violin when he was a kid," Visconti says. "So he had these two other major instruments under his belt. And then he noticed that I had scored an arrangement for something on The Man Who Sold the World -- so Mick was like, looking over my shoulder, and he said, 'Can you teach me how you score?' Because he could read and write music."

The critical accolades and album sales grew, but Ronson's bank balance didn't. While the Spiders from Mars were selling out arena shows, Ronson was earning less than 100 British pounds a week.

The director of the documentary, Jon Brewer, began working with Bowie and Ronson around that time. Brewer says he made Beside Bowie to try to set the record straight because Ronson was denied the respect he deserved.

"With respect to the money, he most certainly didn't get what he was supposed to have done," Brewer says. "And I just feel that that was something that went under the bridge, and people went, 'Oh, we must sort that out,' but nobody actually ever did. And that's one of the struggles I think David was faced with."

Ronson never got songwriting or arranging credit on any of the early Bowie albums. Suzi says she and Ronson lived paycheck to paycheck after Ronson's solo career fizzled — even though he arranged John Mellencamp's No. 1 hit "Jack and Diane."

"David should have gone to his grave thinking he should've righted a great wrong — he certainly should have," Suzi says. "Mick was never credited and never paid. Never credited!"

And perhaps, Brewer says, his documentary will help restore Ronson to his rightful place in rock history.

"Mick Ronson was probably one of the greatest arrangers of all time," Brewer says. "You know, he did his day's work, and in that day's work was making hit records."