Accessibility links
Trump Pushes Obamacare To Detonation, Forges Path Away From GOP, Democrats After three failed attempts at passing GOP health plans, President Trump appears to be trying to negotiate with Democrats by showing he is willing to facilitate the Affordable Care Act's collapse. 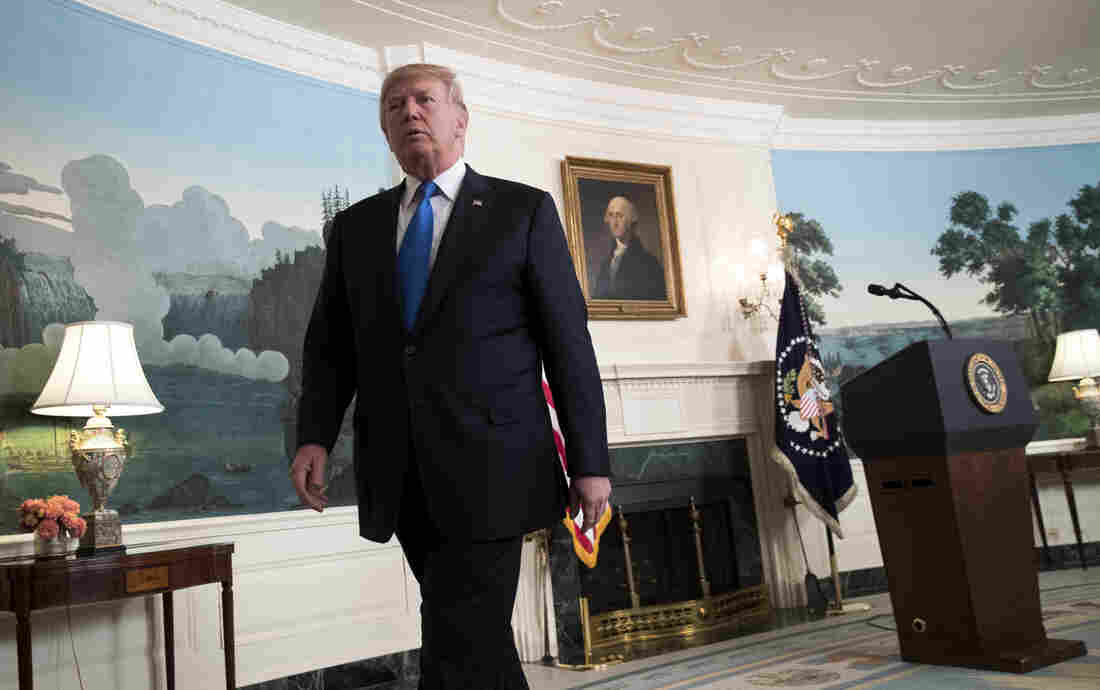 President Trump made some big decisions about health care this week, including cutting off subsidies that benefit lower- and middle-class families. Drew Angerer/Getty Images hide caption 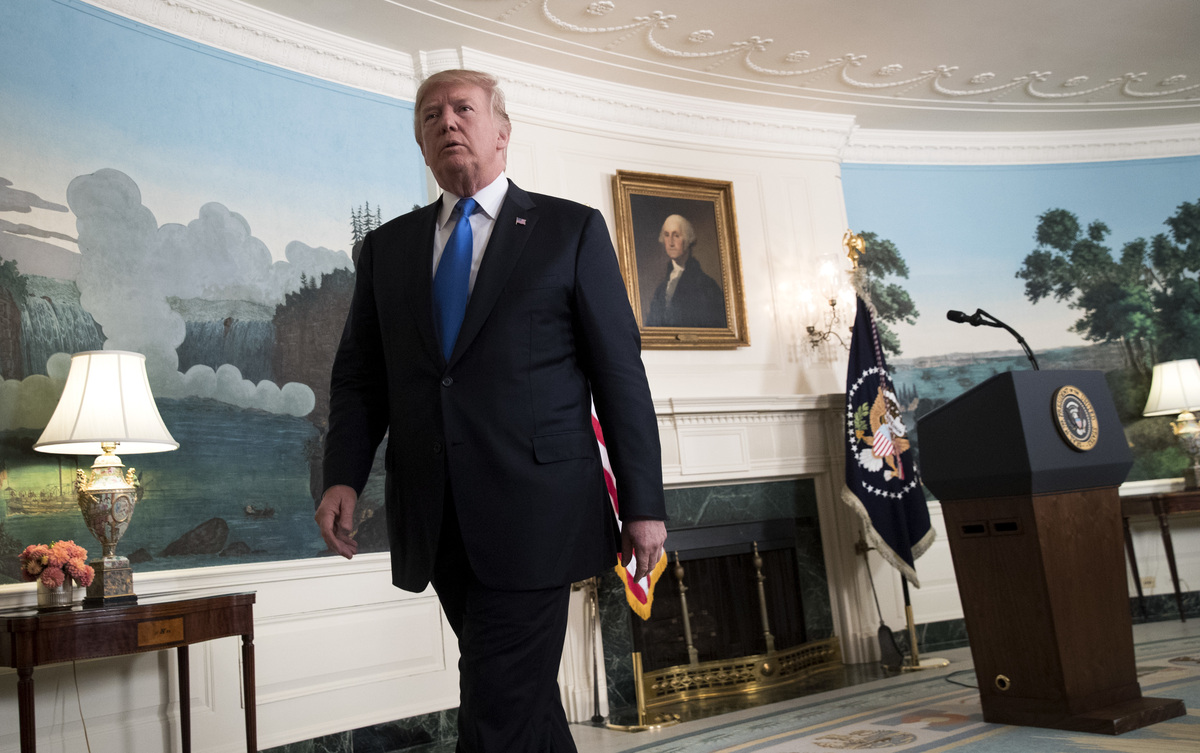 President Trump made some big decisions about health care this week, including cutting off subsidies that benefit lower- and middle-class families.

Back in March, after the first Republican legislative failure to repeal and replace the Affordable Care Act, also known as Obamacare, during the Trump presidency, President Trump went before cameras in the Oval Office and revealed some of his thinking when it comes to the politics of health care.

"I've been saying for the last year and a half that the best thing we can do politically speaking is let Obamacare explode," Trump said. "It is exploding right now."

Experts said that the ACA wasn't "exploding" but that it needed fixes to help incentivize insurers to stay in marketplaces.

But now, six months later, Obamacare may actually be on the road to "exploding" — catalyzed by an accelerant poured over it by Trump. The moves he has taken risk blowing up the individual markets by making insurance too expensive for lower- and middle-class families. Trump's actions, however, could backfire politically, threatening to shift blame for the health care act's shortcomings from former President Barack Obama and Democrats to Trump and Republicans.

That is something Republicans have feared and now believe will happen.

"If people lose their cost-sharing reduction payments — their subsidies — it's going to be pretty hard to blame a former president — Barack Obama — for that," moderate Republican Rep. Charlie Dent of Pennsylvania told NPR's All Things Considered on Friday.

Dent, who is retiring after this term, continued: "We Republicans control the House and the Senate and the White House. If there are problems, we will likely own them. It's pretty hard to say that the former president is somehow going to be able to accept all the blame. He's out of the game right now."

At issue is Trump's decision to end subsidies that help offset the cost of insurance for anyone making up to four times the federal poverty level — that's a yearly household income of $97,000 for a family of four.

Trump's action could mean premium increases of 20 percent by 2018 for people buying insurance through exchanges, the Congressional Budget Office estimates, and more than that in subsequent years. And the CBO estimates it will wind up costing — not saving — the government almost $200 billion over the next 10 years. (Bloomberg explains how.)

Trump's decision comes after three failed high-profile GOP repeal-and-replace efforts in Congress. The White House argues the subsidies are illegal because they are not appropriated by Congress. House Republicans sued the Obama administration hoping to stop the payments.

A court sided with the House GOP but agreed to leave the subsidies in place until a government appeal could be heard. The Trump administration, however, decided to drop the appeal, thereby ending the payments.

In practical terms, though, this will hurt real people, many of whom are in Trump-won states. Will they accept the legal argument that the process was flawed and Congress has to fix it, even if the man they voted for had the power to keep more money in their pockets?

Trump's move came the same day he took yet another step to undermine Obamacare by signing an executive order allowing groups of small businesses and associations to band together to buy health insurance.

That could draw younger, healthier people away from the exchanges. It might give younger people a discount for cut-rate coverage, but it would likely drive up the price of premiums for Americans who need care.

That is not all the Trump administration has done that could pull the rug out from under the ACA — it has also shortened the sign-up period for health care; closed the federal exchange on Sundays; and cut the budget for marketing efforts, including ending advertising to urge sign-ups.

Cutting subsidies is a move long feared by health care advocates. Trump has teased doing it for months.

Back in April, he told The Wall Street Journal he was thinking about it, and perhaps revealed why:

"What I think should happen — and will happen — is the Democrats will start calling me and negotiating," Trump told the paper.

The Journal noted that he continually came back to subsidies and called out Democratic leaders Sen. Chuck Schumer and Rep. Nancy Pelosi.

Recently, Schumer of New York and Pelosi of California appeared ready to work with Trump. The president sided with them over leaders of his own party about a three-month extension on the debt ceiling, which is set to need to be raised again in early- to mid-December.

Republicans worried that he was falling into the arms of "Chuck and Nancy," but Trump appears to be trying to carve out a third path for himself — dismissing Republicans and browbeating Democrats, hoping they will come to him on bended knee.

But Democrats have some leverage — without their votes, it will be difficult for Republicans to keep the government open or raise the debt ceiling on their own. That would risk a government shutdown and a default of U.S. debts.

And "Chuck and Nancy" don't appear ready to kneel.

"Sadly, instead of working to lower health costs for Americans, it seems President Trump will single-handedly hike Americans' health premiums," Schumer and Pelosi said in a joint statement. "It is a spiteful act of vast, pointless sabotage leveled at working families and the middle class in every corner of America. Make no mistake about it, Trump will try to blame the Affordable Care Act, but this will fall on his back and he will pay the price for it."

Schumer later told reporters. "Unless our Republican colleagues act," he said, "the American people will know exactly where to place the blame when their premiums shoot up, and when millions lose coverage."

The message is clear, and it doesn't sound like begging from Democrats, who are still smarting from Trump's apparent backing away on immigration. Democrats thought they had a kind of agreement in principle on legalizing children brought to the U.S. illegally with Trump — until he submitted a list of demands Democrats found too odious (that included the building of the border wall).

But, pointing to looming spending negotiations in December, Schumer also said with some optimism, "We're going to have a very good opportunity to get this done in a bipartisan way, if we can't get it done sooner."

It now may be up to like-minded congressional Democratic and Republican negotiators to find a bipartisan solution, because it's tough to negotiate with someone who seems unconcerned about the fallout of his decisions.