Accessibility links
'Skinful Of Shadows' Delights Without Reservation Frances Hardinge's captivating tale follows a girl during the English Civil War who discovers she has the power to invite ghosts into herself — a power that puts her in danger, but can also save her.

'Skinful Of Shadows' Delights Without Reservation

'Skinful Of Shadows' Delights Without Reservation 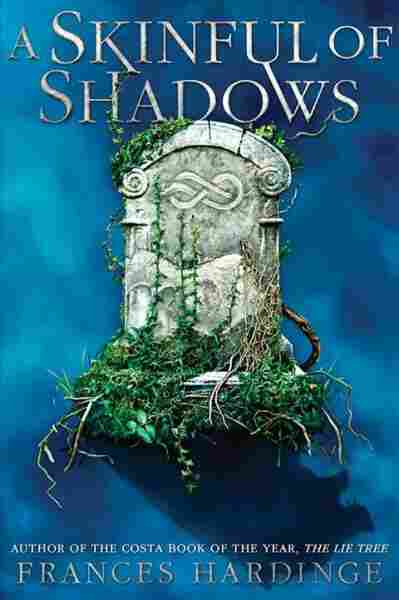 A Skinful of Shadows

Fans of Frances Hardinge's Costa Award-winning book, The Lie Tree, will be delighted by this new portrait of a unique corner of British history, seen through the eyes of a girl who is too smart for the comfort of her time and circumstances.

Since a very early age, Makepeace has known she can sense things that others cannot. Dark shades come scrabbling from the corners, seeking to invade her mind. They are ghosts, the restless spirits of the dead, and they can sense that there's something special about her. They know that she can let them in and house their souls in her body, giving them a second chance at life.

Makepeace's mother uses harsh means to train her to fight them off and evade the terrible destiny that she's inherited along with her ability to sustain the dead. But much like the ghostly spirits that seek her out, the country is in a state of unrest. Parliament and the Crown are at war, and soon no corner of England will be safe from the conflict.

In order to survive, Makepeace must make a place for herself at Grizehayes, the seat of the noble Fellmotte family. Though she's only a humble servant in the kitchens, she comes to realize that the Felmottes have a sinister reason for sheltering her, and a purpose for her supernatural ability. Fortunately for her, they don't know that Makepeace is not as alone in the world as she seems: She already has a ghost inside her, an unruly, wild creature who will help her fight them to the very end.

'A Face Like Glass' Is A Magical, Perfectly Ticking Machine Of A Tale

It's rare to find a book that delights without reservation. Reading A Skinful of Shadows is like studying a Vermeer painting, wherein a young woman with an enigmatic expression gazes defiantly at her audience. In its pages, we meet a prickly, stalwart girl who wants so badly to do right by those around her and who is constantly dismissed and underestimated — to the peril of those who do the underestimating. We find a score of tragic ghosts who weave deftly in and out of the narrative in ways impossible to predict, and lady spies of both the living and the dead varieties. We also get animal sidekicks, hidden messages, accusations of witchcraft, and a horribly impressive noble family that gives a new meaning to the idea of generational trauma.

As for the setting, the English Civil War isn't a very popular period for young adult fiction, falling as it does in the murky place between the gory romanticism of the Tudors and the gothic shenanigans of the Victorian era, but the conflict of the war creates a tense and riveting backdrop for more personal drama. Truly no corner of England is safe, and as Makepeace traipses her way across the countryside, her every move is complicated and endangered by the strife of war, be it hungry soldiers, plagues, or suspicious townsfolk.

Sometimes historical fiction can get a little predictable, but that's not the case here. The plot twists and turns, and just when it seems like Makepeace has finally figured out something important or gotten on track, the world shifts.

Sometimes historical fiction can get a little predictable, but that's not the case here. The plot twists and turns, and just when it seems like Makepeace has finally figured out something important or gotten on track, the world shifts and she's off again, looking for new answers and desperately trying to find a safe corner to call her own.

Most beautiful are the things that Makepeace learns about herself — lessons which will resonate with prickly girls of all sorts. It's hard to trust in people when they so often prove disappointing, and Makepeace relies on the fact that the things hidden inside of her can't be taken away. She's smart enough to keep a wild little piece of herself tucked out of sight. But it's lonely being in disguise all the time and never truly letting anyone in. To make it through her many trials, she has to drop her armor and literally open herself to the souls of friends and foes alike, even though they may very well prove her undoing.

Much like the ghosts that she hosts, readers will find themselves charmed by Makepeace and her kind, defiant spirit.