Accessibility links
Chicago's Jewish Community Unites To Be More Inclusive Of People With Disabilities Houses of worship struggle with how to be inclusive of people with disabilities. An ambitious effort in Chicago is part of a nation-wide movement to help synagogues be more welcoming.

Listen · 4:21 4:21
Chicago's Jewish Community Unites To Be More Inclusive Of People With Disabilities 4:21 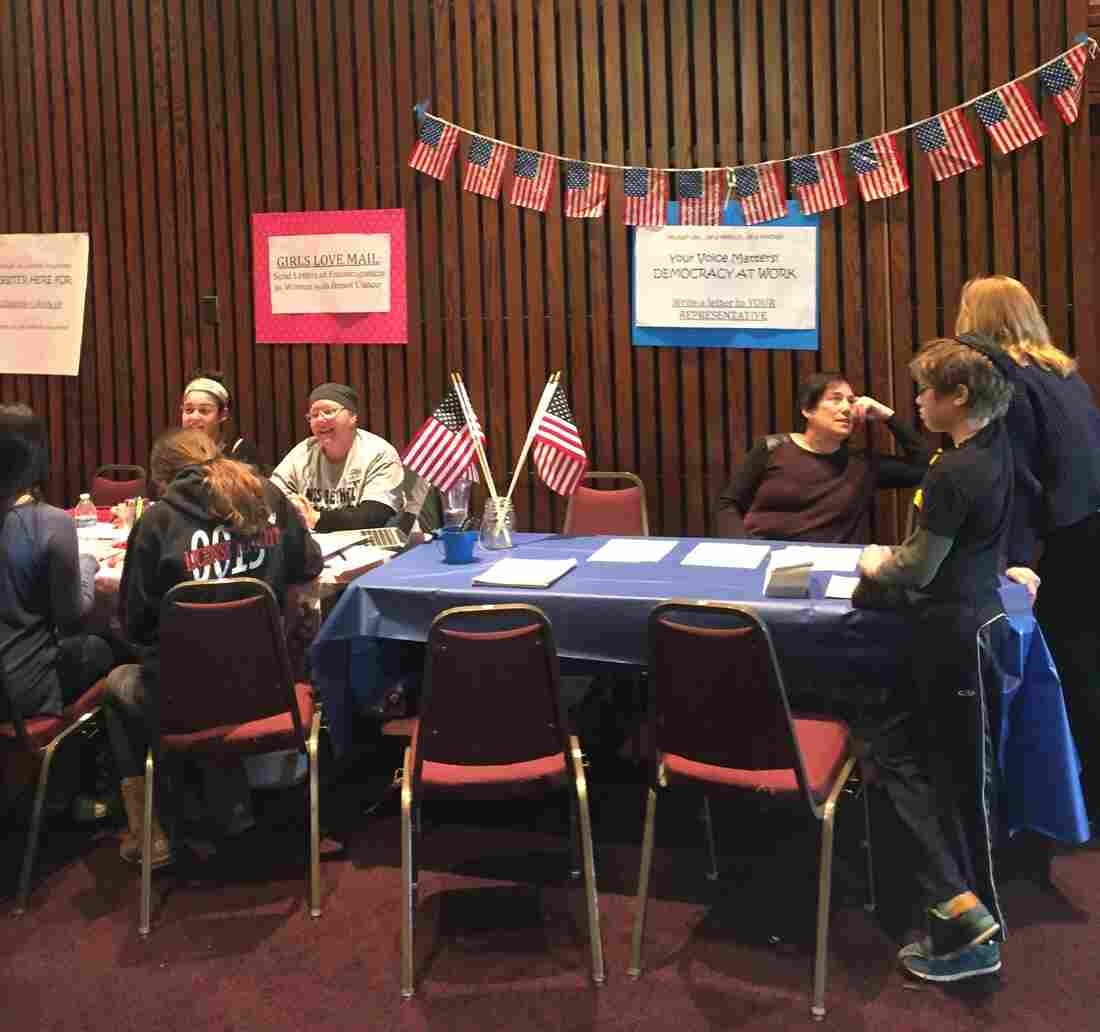 Members of North Suburban Synagogue Beth El in Highland Park, Ill., at a "Mitzvah Day" earlier this year, a day when families participated in projects to help others. Courtesy Monique Parsons hide caption 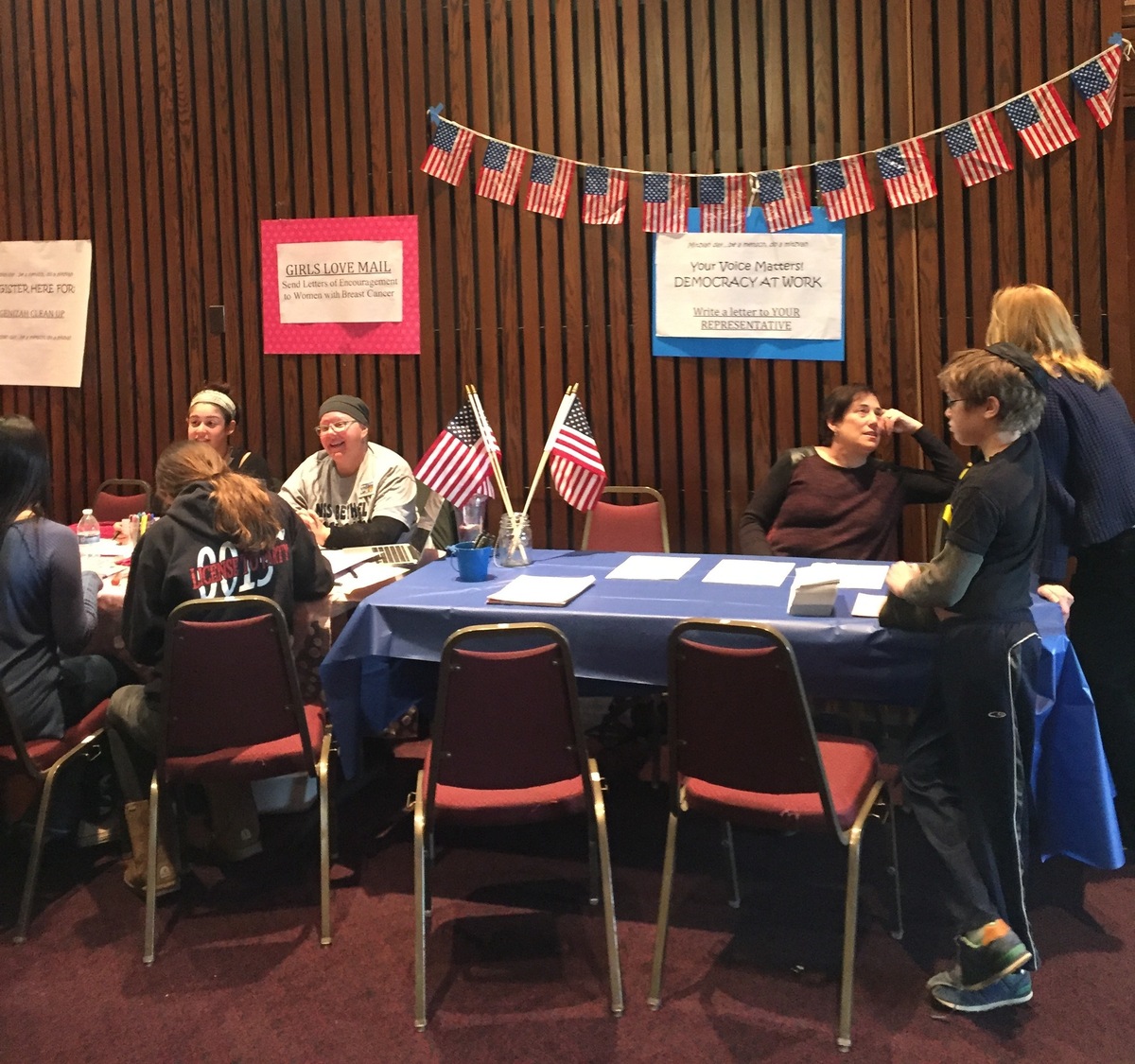 Members of North Suburban Synagogue Beth El in Highland Park, Ill., at a "Mitzvah Day" earlier this year, a day when families participated in projects to help others.

There's a verse from the biblical prophet Isaiah carved into the walls of many synagogues: "My house shall be called a house of prayer for all people." These wall inscriptions are a reminder to be welcoming to everyone. But one in five Jewish families includes someone with a disability, and many of them say synagogues aren't reaching out to them.

A new project in Chicago aims to change that. The region's Jewish community is working together to make congregations more inclusive of people with disabilities. Dena Cooperman, whose 12-year-old daughter has developmental disabilities, says it's a critical issue.

"It's hard, when you're fighting in the secular schools nonstop, and then to fight also in a place of your house of worship where you thought it was always a safe place," Cooperman says. "A lot of parents are like: 'I just can't anymore. I don't have it in me.' And I get that."

Cooperman's a member of North Shore Synagogue Beth El in Highland Park, Ill., one of the congregations participating in the inclusion project. At a "Mitzvah Day" earlier this year, a day devoted to projects that help others, families gathered to make blankets for hospitalized children. Cooperman's daughter, Danielle, helped make one covered with Disney princesses.

"Everyone in that synagogue knows Danielle, has incredible patience for her and it makes her feel very welcome in our synagogue," Cooperman says. "It's wonderful."

A person is not defined by their disability

Keeping families like hers has become a priority for religious groups nationwide. Synagogues in Minnesota, Massachusetts, and New Jersey have inclusion efforts, and a young Muslim organization called Muhsen is working with mosques. The project in Chicago's Jewish community is ambitious. It began two years ago with a study of nearly 100 synagogues. All the Jewish movements – Reform, Conservative, Reconstructionist, Orthodox – are known to argue over everything from kosher food to Israeli politics, but they've set aside those disagreements and are working together.

They're working with Ed Frim, a national expert on synagogues and inclusion. He's trying to help the community overcome a tendency to treat people with disabilities as service projects, and he urges rabbis and others to speak openly about how they feel when someone looks different or communicates differently.

"Sometimes all it takes to get over that is to help them have a situation where they can practice doing it," Frim says, "and realize that this is another person who's not really defined by their disability."

Many adults with disabilities have been part of this process, including Becky Shuman, who was panelist at a workshop for eight congregations earlier this year. The workshop was part of the Chicago synagogue inclusion effort; it was one of many educational program they've held throughout the year on the subject.

"I'm really glad that you guys have made me feel special about the synagogue," Shuman told the group. "I feel very, very happy because I'm always welcome."

But people have also shared painful stories. Shuman mentioned a time when a staff member scolded her for raising her hand during a sermon; a mom said a rabbi once kicked her out of a holiday service because her special needs daughter was being too loud. Jodi Newmark, a leader of the Chicago inclusion effort, says their study found reports of physical obstacles too, as houses of worship aren't required meet standards of the Americans with Disabilities Act.

The study also revealed a disconnect between the way synagogues viewed themselves and the way families viewed their synagogues, Newmark says. Many synagogue leaders felt they were doing a good job in terms of inclusion.

"And that's understandable," she adds. "Because many are." Newmark speaks from experience: her own son has developmental disabilities, and he feels at home in their synagogue. "Yet that divide was stark and was telling to us," Newmark says.

At North Suburban Synagogue Beth El north of Chicago, Dena Cooperman gives her synagogue high marks for welcoming her daughter. Yet when Rabbi Michael Schwab made inclusion the focus of a holiday sermon last year, Cooperman sobbed. She realized she'd been skipping services, pulling away from a place she loved because she was so worried her daughter would make noise and bother people.

"No one has ever asked me leave. I'm the one who feels uncomfortable," Cooperman says. "But that changed after Rabbi Schwab's sermon. Completely."

The rabbi told the packed sanctuary to embrace every family He noted that their biblical ancestors – Abraham and Sarah – kept their tent open on all sides.