Accessibility links
Delia Derbyshire, Electronic Music's Forgotten Pioneer Electronic music as it is now known and used would not exist without Derbyshire and her spirit of human, sonic manipulation. 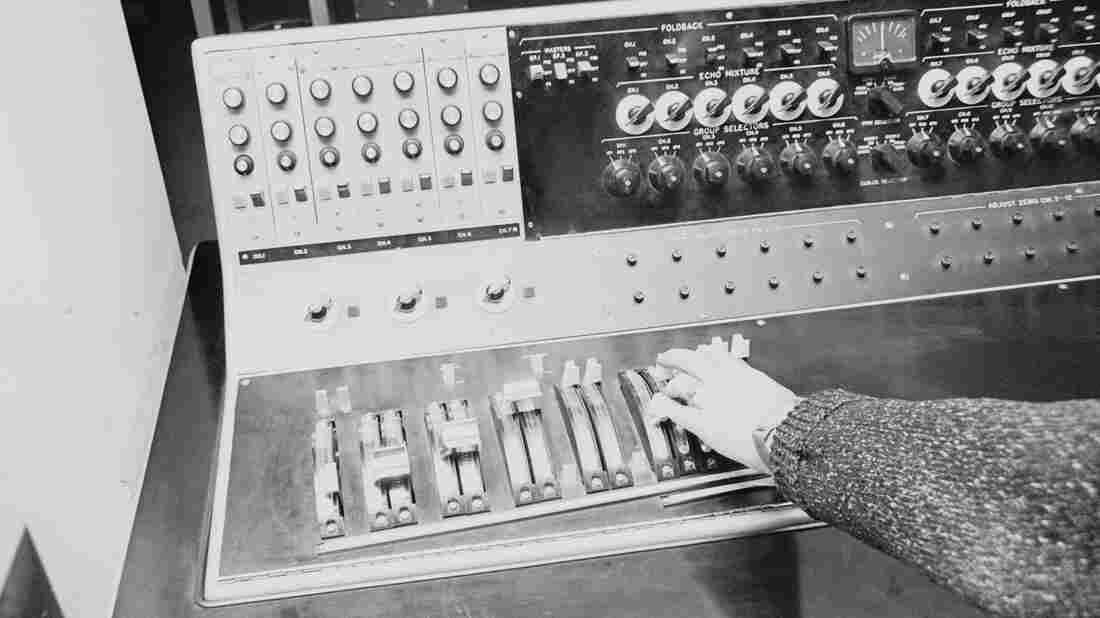 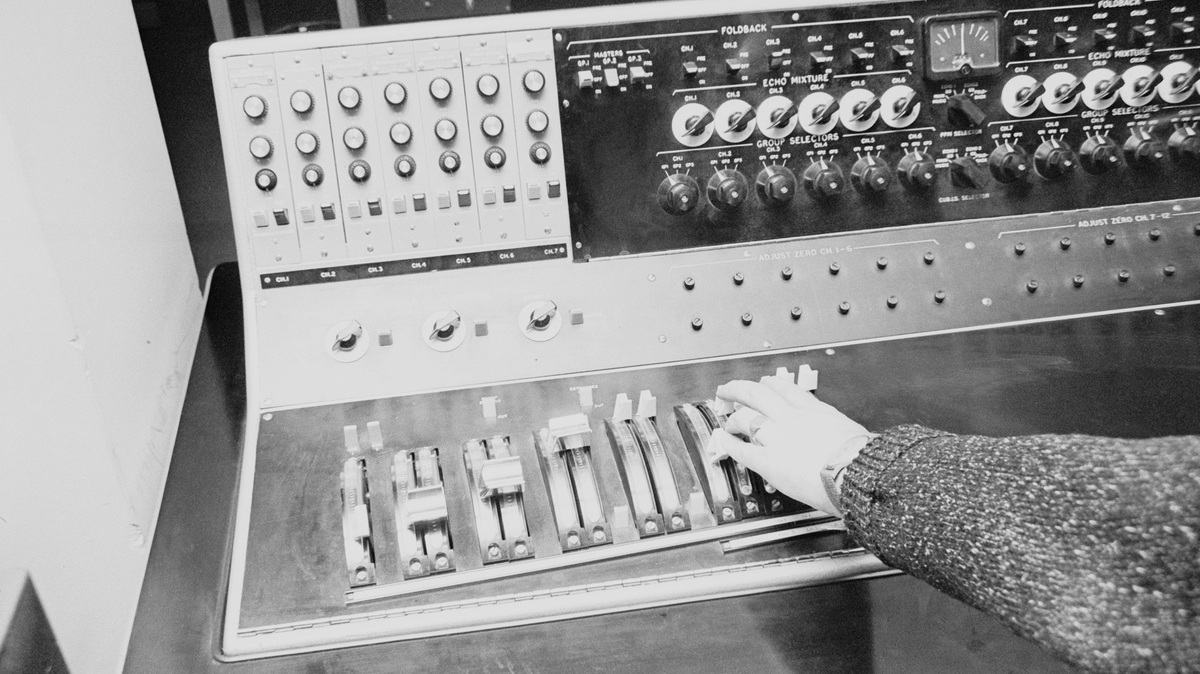 Delia Derbyshire became a sound specialist in the 1960s at the BBC Radiophonic Workshop. (Shown here: Dick Mills adjusts one of the Workshop's machines).

Of the forgotten and underappreciated pioneers of electronic music, no one deserves to be championed like Delia Derbyshire, who, in her decades of experimentation, altered the very fabric in which electronic music is understood. Misogyny runs rampant in the way musical history is presented, and it's often most prevalent in conversations about music with a relationship to science or technology — and the stigma about women and STEM persists today. But Derbyshire did not allow herself to be limited by prevailing expectations of her (or any) era; she became a founder of musique concrète and one of the most important voices in electronic music. Experimental recording owes much to this woman who refused rejection.

Derbyshire was born in Coventry, England in 1937. In her youth, she quickly showcased an undeniable intellect and understanding of the congruency between math and music. She studied at Girton College in Cambridge and, after graduating, applied for a recording position at Decca Records. She was immediately denied: According to the 2010 BBC documentary about her life, Sculptress of Sound: The Lost Works of Delia Derbyshire, she was told by a representative that "the studio was no place for a woman."

All that changed in 1960 when she went to work at the BBC as a studio manager. She soon became enamored of the Radiophonic Workshop, a division of the media conglomerate dedicated to electronic experimentation. The invention of tape recording in the 1950s allowed sounds to be manipulated in entirely new ways; in a time when radio dramas ruled popular entertainment, the Workshop was a creative — and coveted — place of employment. In 1962, Derbyshire was assigned a position at the workshop, where she'd work for over a decade, becoming a sound specialist and a leading voice in musical counterculture: The weirder her soundscapes became, the more wondrous they felt. She created music for the world's first fashion show with an electronic soundtrack (and considering the commonality of techno/dance music on the runway, she left a legacy in that field, too). She organized robotic noise in a way that felt truly alien, shocking sounds whole decades ahead of this music's time.

For Derbyshire, the technology used to doctor ambient, instrumental or found natural sounds using magnetic tape appealed to her most experimental impulses. She soundtracked countless radio programs prior to the mid-1960s, when her focus shifted to television shows. In 1963, she created an electronic theme for the Doctor Who series, which was a breakthrough both for the program and for her career. Using feedback and bits of tape to give the listener a realistic feeling of traveling through space, Derbyshire laid a foundation in which the fantastical world of Doctor Who could come to life. It was one of the very first TV themes to be entirely composed of electronic sounds, giving the series its inherent eeriness. Legend has it that when Rob Grainer — whose composition Derbyshire worked from to create the theme — first heard Derbyshire's recording, he was so shocked he asked her, "Did I really write this?" to which she replied, "Most of it." Her arrangement would be used until the 1980s, and its influence on television composition and science fiction recordings would live on in future synthesized ventures — it's hard to think the iconic pluckiness of the Knight Rider theme or the joyful percussion of Miami Vice would have existed without Derbyshire's initial endeavoring.

Many of the women featured in NPR's massive Turning the Tables undertaking are singers, history-altering figures who used their voices to inspire change. Derbyshire's offering is removed from that style of creation, yet just as physical — all of her organized soundscapes were handmade. In the mid-to-late 70s, she left music with the introduction of the synthesizer; even though her music was robotic, it felt human, and the synth removed a certain level of connectivity at the heart of her tracks. To make the sounds Derbyshire desired, she would quite literally cut tape and stick them back together in a new, inventive order. It's why her tracks, from before and after Doctor Who and everywhere else, inspired a resonance far beyond her contemporaries. When Derbyshire passed away on July 3, 2001, she left behind an enduring legacy. Electronic music as it is now known and used would not exist without Derbyshire and her spirit of human, sonic manipulation.

A previous version of this story incorrectly spelled the title of the TV show for which Derbyshire created the theme; it is Doctor Who, not Dr. Who.