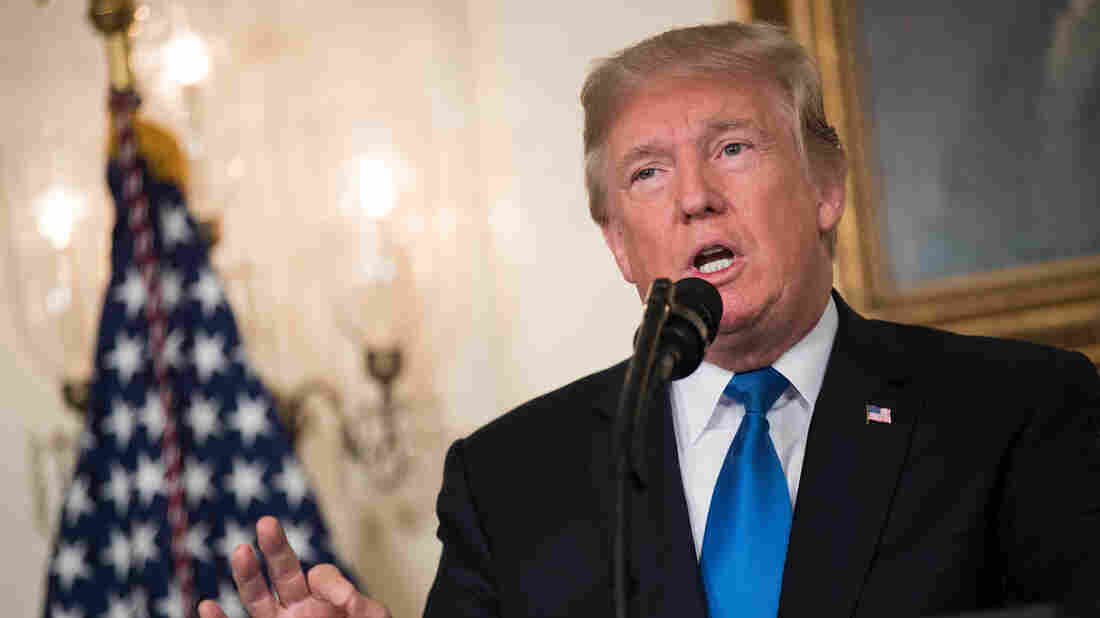 President Donald Trump makes a statement on the administration's strategy for dealing with Iran, in the Diplomatic Reception Room in the White House, on October 13, 2017. Drew Angerer/Getty Images hide caption 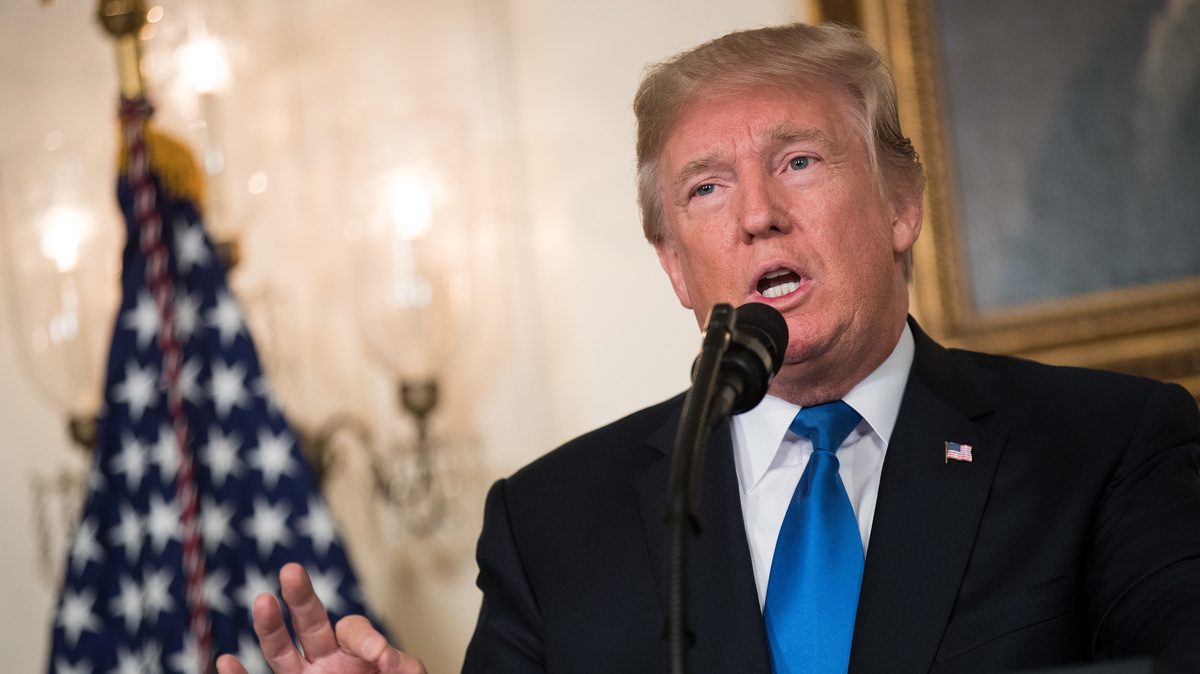 President Donald Trump makes a statement on the administration's strategy for dealing with Iran, in the Diplomatic Reception Room in the White House, on October 13, 2017.

President Trump has recently taken a series of what appear to be bold executive actions to reverse Obama-era policies: declining to re-certify the Iran nuclear deal, halting subsidy payments to insurance companies and setting an expiration date for the DACA immigration program. But, in so doing, he's dumping thorny problems on a GOP-controlled Congress already struggling to rack up significant legislative accomplishments.

This did not go unnoticed by one of the top Democrats in Congress. Trump "throws destructive bones to his base then tells Congress to fix it: Iran, Health care, Puerto Rico," Senate Minority Leader Chuck Schumer, D-N.Y., tweeted Saturday.

.@POTUS’ M.O.: failure to lead. Throws destructive bones to his base, then tells Congress to fix it: Iran, Health care, Puerto Rico

While Trump said Friday that Iran had violated "the spirit" of the 2015 nuclear deal, he didn't pull out of the multi-nation agreement, at least not yet. Instead, he opened the door for congressional action — and that's exactly what he's asking for.

Trump Threatened To Kill The Iran Nuclear Deal. But The Deal Wins — For Now

"I am directing my administration to work closely with Congress and our allies to address the deal's many serious flaws so that the Iranian regime can never threaten the world with nuclear weapons," Trump said.

And with that Trump dumped another item on Congress' already very full plate.

Democrats and moderate Republicans including Charlie Dent of Pennsylvania and Ileana Ros-Lehtinen of Florida expressed dismay at the move. Both Dent and Ros-Lehtinen have already announced they do not intend to run for re-election next year.

Cutting health care subsidies will mean more uninsured in my district. @potus promised more access, affordable coverage. This does opposite.

"We at the end of the day will own this. We, the Republican Party, will own this," Dent said in an interview on CNN. "I believe his action will force us to enter into some kind of a bipartisan agreement on the cost-sharing reduction payments" to stabilize the insurance markets.

Trump said stopping the payments was part of an effort to undo the Affordable Care Act.

Still, he said he hoped this would prompt Congress to take bipartisan action to repeal and replace Obamacare. He said Friday he wants Democrats to come to him. They aren't. And even when it comes to Republicans, it's not clear the president and the various factions in Congress are even remotely on the same page about how to proceed.

And that's not the only item the president wants Congress to act on. There's also the Deferred Action for Childhood Arrivals program for undocumented immigrants brought to the country as children. When Trump announced he would put a six-month expiration date on the program, he tweeted, "Congress, get ready to do your job - DACA!"

Congress, get ready to do your job - DACA!

Early on, it looked like he had reached the broad outline of an agreement with Democratic leaders in Congress, only to then release a list of hard-line demands that Democrats — and even many Republicans — won't support.

"What I want is tremendous border regulation. I want the wall. And we're going to get other things," Trump told Sean Hannity on Fox News. "And we're going to see if we're going to work something out. Now whether or not we do, I don't know. But it would be wonderful to solve the DACA problem."

When Trump says "we" as he discusses DACA, Iran and health care, he mostly means "them." Congress will have to do all the heavy lifting. And none of this will be easy for a GOP-controlled Congress (narrowly in the Senate) that is far from unanimity on any of these matters.

"Every time you buck some issue over to their plate, you blow the place up," said Sarah Binder, a senior fellow at the Brookings Institution who specializes in Congress. "And Congress is not a well-oiled machine, so disrupting the agenda and putting more things on their lap — issues which are really wedge issues within the Republican Party ... it's almost mind-boggling to me that a president who doesn't see himself as part of the party in Congress puts them back in that situation."

And all of these items come on top of what was supposed to be the top priority for congressional Republicans this fall: passing a tax system overhaul. In the midst of everything else, Trump has been campaigning for tax cuts and other changes to the tax code. He suggested maybe it could be a "Christmas gift" to Americans.

A more likely Christmas gift could well be a shutdown showdown over must-pass government funding legislation. The current funding expires Dec. 8, and at least some of these issues could get wrapped up in negotiations.

On Friday, Schumer did express optimism that at least the health care subsidies could pass that way.

"I think we're going to have a very good opportunity in the omnibus to get this done in a bipartisan way, if we can't get it done sooner," he said.