Accessibility links
After Hurricane Power Outages, Looking To Alaska's Microgrids For A Better Way Alaska is a leader in microgrids since its remote communities have had to power themselves for decades. Seafood processors like Ocean Beauty are some of the largest energy consumers in Kodiak, Alaska, which has generated more than 99 percent of its electricity from renewable sources since 2014. Here, the Ocean Beauty seafood plant. Eric Keto/Alaska's Energy Desk hide caption 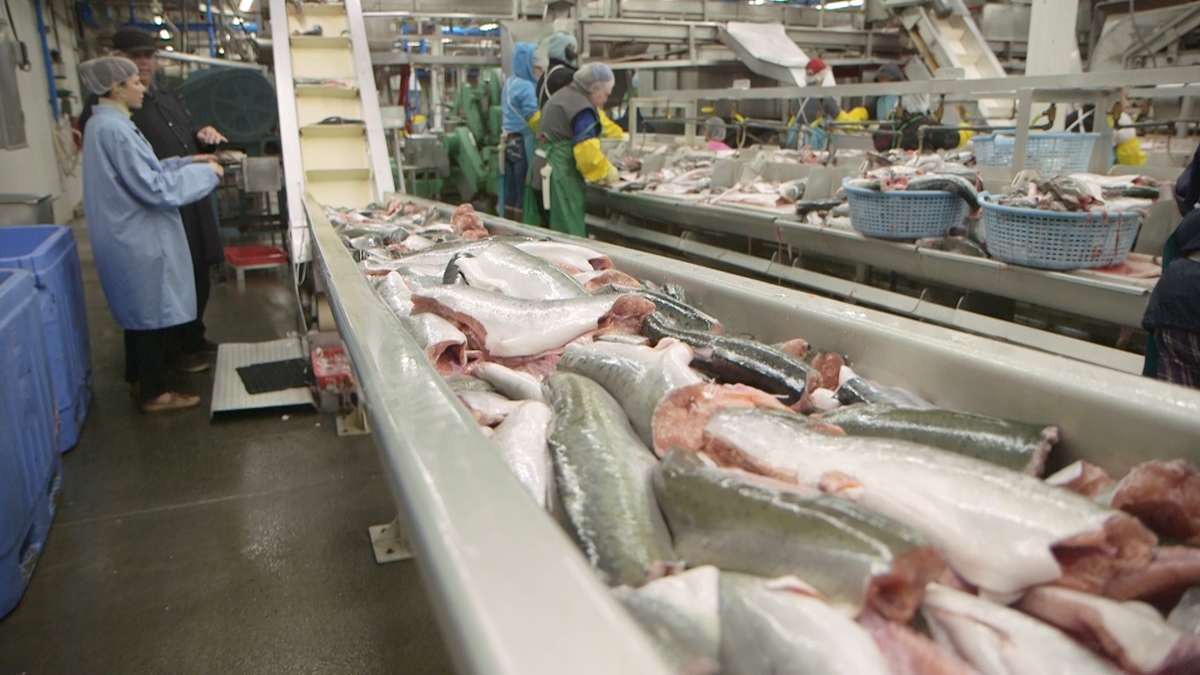 Seafood processors like Ocean Beauty are some of the largest energy consumers in Kodiak, Alaska, which has generated more than 99 percent of its electricity from renewable sources since 2014. Here, the Ocean Beauty seafood plant.

This archipelago in the Gulf of Alaska is home to one of the busiest commercial fishing ports in the country. Inside the Ocean Beauty seafood plant in Kodiak, where a maze of conveyer belts carry gutted salmon past workers in hairnets and gloves, manager James Turner ticks off everything that contributes to his monthly electricity bill: canning machines, pressure cookers, freezers lights.

Plus, down the road is the nation's largest Coast Guard base and to the south is a state-owned rocket launch facility. It's no small feat, then, that the power for all of this is generated right here on the island, from almost entirely renewable sources.

More places are exploring creating microgrids after a spate of hurricanes and other storms knocked out power to millions in recent years. In Puerto Rico, especially, advocates say this could help key institutions like hospitals and military bases keep the lights on when the larger grid goes down. They might want to look north — far north — for guidance.

"Alaskans have been doing this for 50 years," says Ian Baring-Gould, of the National Renewable Energy Lab in Boulder, Colorado. He says the state's remote communities have "an amazing wealth of expertise in that area."

Of course, not all of Alaska's microgrids run on renewable energy.

Kodiak has long gotten most of its electricity from a hydro dam. But a decade ago, as demand grew, it was relying more and more on diesel generators. The cost of diesel was high and unpredictable, a problem for businesses trying to forecast their expenses.

"When you have that threat of a diesel bill hanging over your head every month, that is very motivating to find solutions," says Jennifer Richcreek of the Kodiak Electric Association, or KEA.

"Everyone's TV's are going to brown out"

In 2007, the utility set a goal of 95 percent renewable power. It built a handful of wind turbines, plus a bank of batteries to supplement the community's hydro power. That worked for a while. But then came a new challenge: the Kodiak port wanted to replace its old diesel-powered crane with a giant electric one.

The 340-foot tall shipping crane would be a massive power hog. Demand would spike every time it lifted a container off a cargo ship. When Rick Kniaziowski, the terminal manager for the shipping company Matson, first asked about getting it, the head of the local utility said no.

But the utility looked around for a solution, and it found a European company, ABB, that offered a new kind of energy storage: flywheels.

There are two here now. From the outside, they look like a couple of white trailers behind a chain-link fence. But inside, they're cutting edge sci fi. In the corner of each trailer is a "six and a half ton of spinning mass," says KEA's Richcreek. "It's in a frictionless vacuum chamber hovered by magnets."

Here's how it works: When there's excess power on the grid, it spins the flywheel. The flywheel stores that energy as motion, and then pumps it back out the second a big surge is needed. When the crane isn't operating, the flywheels respond to fluctuations in wind power, working with the batteries to stabilize the grid. Kodiak is one of the first places in the world to use flywheels this way.

Altogether, Kodiak's microgrid operates like an orchestra, each piece responding millisecond by millisecond. The wind drops suddenly and the flywheel kicks on. As the flywheel slows, the batteries step in. And behind it all, the hydro ramps up. And Kodiak has managed to do all this while keeping rates stable. In fact, the price of electricity in Kodiak has dropped slightly since 2000.

Richcreek says this is the future.

"The solutions are out there," she says. "They're outside the box. They may be different. But the industry is changing."

The system has drawn international interest, and Kodiak hopes other American communities will take note, too.