Accessibility links
The Folk Music Festival That Started With A Spider Bite Night of the Taranta, an Italian folk music festival akin to Woodstock, celebrates a musical tradition that dates to antiquity. 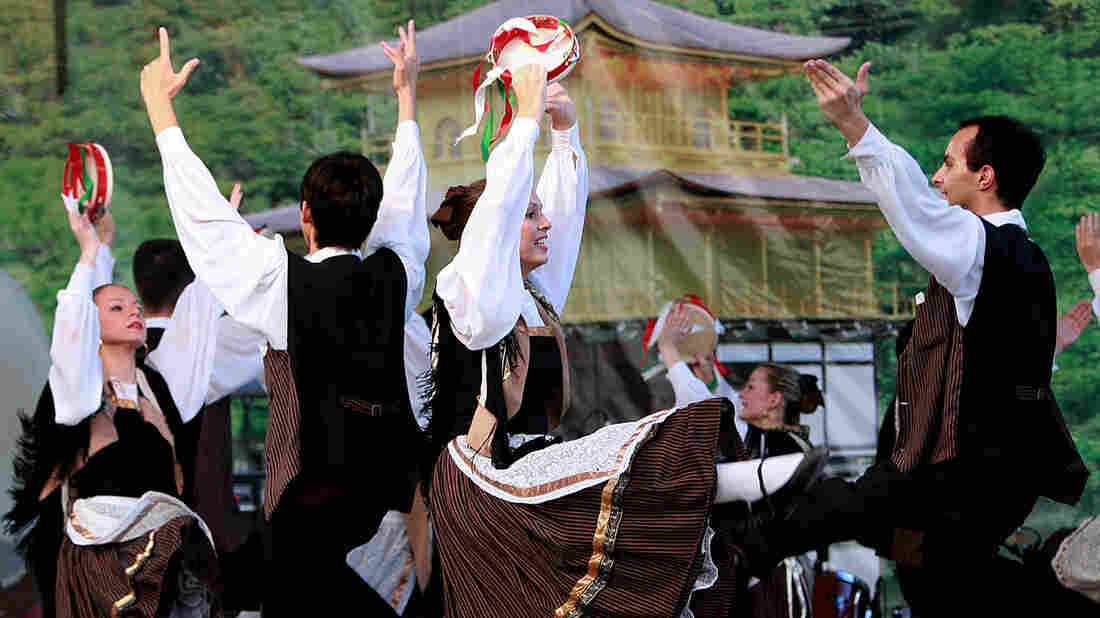 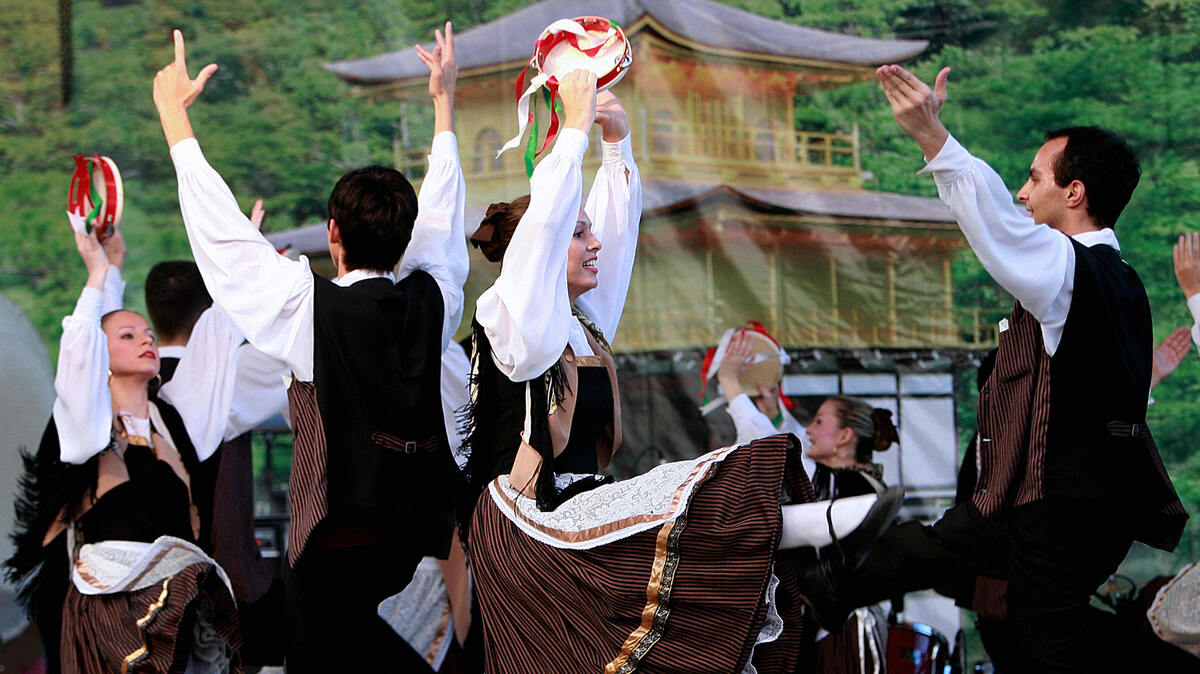 Italian descendants perform the Tarantella, a dance that originates from a spider bite, in Curitiba, Brazil.

The tarantella is a lively folk dance and musical style originating in southern Italy's Apulia region, the heel of the Italian geographic boot.

Its name derives from the poisonous bite of a local spider and is rooted in pagan tradition.

Today, it's the theme of one of Europe's biggest annual folk music concerts, now in its 20th year. It's called Night of the Taranta, and it attracts top international stars. This year, it drew some 200,000 tarantella aficionados for 4 1/2 hours of uninterrupted music and dance.

The festival takes place in the town of Melpignano, where a huge stage was built in front of a sand-colored limestone former monastery from the 16th century.

For hours before the concert began, the sound of tambourines and guitars echoed through a large field in front of the stage. Thousands of young people had been camping out since dawn; it was like an Italian version of Woodstock, some 50 years later.

Four young men with tambourines formed a circle and cheered as Micaela Nasillo, barefoot, frenetically spun around as in a trance, challenging the musicians to keep up with her.

"I feel the itch under my feet," Nasillo says. "The dance is called pizzica: the bite. When women working in the field were bitten by a spider, the only way to expel the poison was to dance for hours, even days. For me, it's the rhythm that makes me dance."

The tarantella, or pizzica, is said to originate in antiquity, in Dionysian and Bacchanalian rites.

Daniele Durante, the artistic director of the festival, says that in the Middle Ages, the dance evolved into an exorcism for real or imagined spider bites, as well as psychological ailments.

"When the Catholic Church prevented women from dancing," Durante says, "there was one exception: The woman had been poisoned; she was 'tarantata,' and the only cure was for her to dance. That's how a pagan rite was adapted by the local Catholic church."

Today, the tarantella has shed its mystical origins. Performed with tambourines, mandolins, flutes, bagpipes and accordions, it's an expression of pure joy — as well as tongue-twisting lyrics, as in the song "Cala la Capu."

And for one night a year in Melpignano, the tarantella takes on an international flair, crossing over into jazz, rock, salsa and folk music from other cultures and traditions.

Cuban percussionist Pedrito Martinez says all the guest performers had to learn the local dialect.

"It's an amazing experience," he says. "I can identify myself with this kind of music because I came from folk music in Cuba. There is a lot of rhythm. [That] definitely connects; it's all about happiness. It's beautiful."

A lullaby called "Nazzu" began with four Italian women singing a folk ditty. Then, Tim Ries, who plays saxophone with The Rolling Stones, jumped in and turned the lullaby into an improvisational jazz riff. A few minutes later, Martinez took over; with his drums and voice, it was transformed again as he gave it a foot-stomping Latin American sound.

One of the few slow numbers is the ballad "La Cerva," performed by singer-songwriter Suzanne Vega and Gerry Leonard, who played guitar with David Bowie.

Vega says she was particularly touched by the story of the spider bite that causes a woman to go into a trance. "That's something I feel a lot in my own experience of the music," she says. "I feel that trance very often, and it's beautiful when it can be a public thing, that everyone feels the trance and everyone wants to get up to dance."

Indeed, throughout the concert, many of the 200,000 spectators danced to the music. And they cheered wildly when the great jazz vocalist Gregory Porter joined two Italian singers and Pedrito Martinez, turning a song called "Pizzica Aradeo" into a virtuoso scat rendition.