Accessibility links
Tom Hanks Lays Out A Kinder, Gentler World In 'Uncommon Type' Tom Hanks' well-documented obsession with typewriters is on display in his new story collection, tales linked not just by typewriters but by a benign, humane view of people and their many foibles. 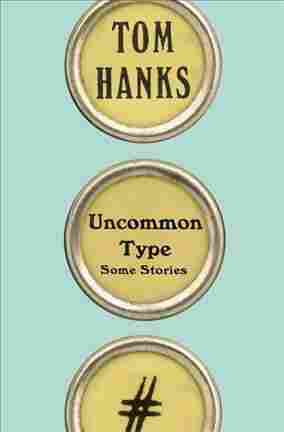 Tom Hanks has heart. It's no news to his fans that empathy fuels his acting — including his back-to-back Oscar-winning portrayals of an AIDS victim in Philadelphia and the endearing hero of Forrest Gump. So it should come as no surprise that empathy also drives his first collection of fiction. While all of the 17 stories in Uncommon Type feature a different antique manual typewriter (Hanks is an avid collector), they are linked by something greater than typewriter ribbons: a decidedly benign, humane view of people and their foibles.

In a world where the news is unrelentingly bleak and much fiction tends toward the dystopic, post-apocalyptic, dark, or edgy, this is a gentler, sweeter kind of storytelling than we've come to expect. Some of the stories are whimsical, some funny, some downright sentimental. Even when Hanks writes about somber subjects like the durable distress of combat or the high stakes for immigrants fleeing persecution, he finds a sweet spot.

"Christmas Eve 1953" features a World War II veteran who lost most of a leg and hand but — unlike his still-traumatized platoon-mate — he's grateful that he had enough left to achieve the American Dream with a good wife, a good job and three good kids. "Go See Costas," the most dramatic story of the collection, captures a smart, tenacious Bulgarian immigrant's perilous flight to America to escape Communist bounty hunters. His fate turns on strangers willing to cut him breaks.

Three stories involve the escapades of a quartet of friends who, as one of them comments, "are like a TV show with diversity casting." Actually, a lot of these stories feel like TV shows with stock casting. The most we learn about MDash, born Mohammed Dayax-Abdo in a sub-Saharan village, is that he's brilliant, works at Home Depot and is about to become an American citizen, "as American as Abdo Pie." His friends each have an immigration story: His work colleague Steve Wong's grandparents were naturalized in the 1940s; the unnamed narrator's father, like the Bulgarian in "Go See Costas," fled Eastern European Communists in the 1970s; Anna, the group's overachiever, is a descendant of the first wave of pillaging pilgrims.

"Three Exhausting Weeks" chronicles — amusingly but yes, exhaustingly — the unwise hookup between Anna and the contentedly "lazy-butt loner" narrator. "Being Anna's boyfriend," he writes of his hyper-motivated former high school classmate, "was like training to be a Navy SEAL while working full-time in an Amazon fulfillment center in the Oklahoma Panhandle in tornado season." Their buddy Steve is even more dubious: "You and her pairing off is like a story line from season eleven when the network is trying to keep us on the air."

In "Alan Bean Plus Four," first published in The New Yorker in 2014, the quartet plans a farfetched trip around the moon in a space capsule named for the fourth man to walk on the lunar surface. Hanks, who played Jim Lovell in Apollo 13 and co-wrote and co-directed the HBO docudrama From Earth to the Moon, has fun with pseudo-scientific details like the "equigravisphere" and "LunaTicket app ($0.99)," but it's the casually dropped little absurdities that give this story the little liftoff it achieves — like the dental appointment that delays the expedition, or the fact that Steve loses his Samsung (the Galaxy, natch) upon splashdown.

Unfortunately, the four "issues" of "Our Town Today with Hank Fiset" misfire repeatedly. The running gag of this deliberately hokey Tri-Cities Daily News/Herald newspaper column is that everything was better in the old days and still is in the Tri-Cities. A typical target: the ridiculous gobbledygook of unedited iPhone prose.

In a world where the news is unrelentingly bleak and much fiction tends toward the dystopic, post-apocalyptic, dark, or edgy, this is a gentler, sweeter kind of storytelling than we've come to expect.

Several stories involve children learning the truth behind their parents' imploded marriages. "A Special Weekend," a touching account of a 10-year-old's eye-opening visit home to the mother he hasn't lived with for half his life, reads like YA fiction in its simplicity. Among a group of sympathetic tales about newly single women, "These Are the Meditations of My Heart" concerns a young woman who finds post-breakup consolation after being matched with just the right Swiss Hermes typewriter.

Typewriters underscore the collection's recurrent theme, summed up in the title of an archetypal Hanks story — "The Past Is Important To Us." Set in 2027, this wistful love story is about a rich but unfulfilled man who, despite the risks, repeatedly travels back in time to the 1939 New York World's Fair, drawn by an enchanting young woman in a green dress. It exemplifies Hanks's predilection for playful sci-fi, old and new technology, and the cornball sensibility of midcentury television.

Is this great literature? No — it's too generic and mawkish. But Uncommon Type offers heartfelt charm along with nostalgia for sweeter, simpler times — even if they never really were quite so sweet or simple.