Accessibility links
'Death In The Air' Revisits 5 Days When London Was Choked By Poisonous Smog Kate Winkler Dawson's new book chronicles The Great Smog of 1952, when moist air from the Gulf Stream stalled for days over London, mixing with poisonous gases and causing more than 12,000 deaths. 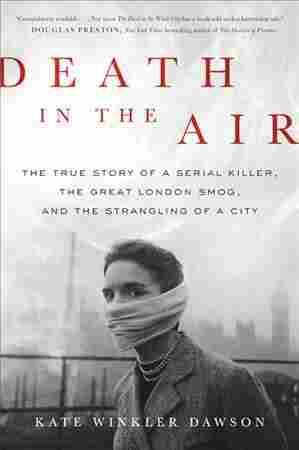 Death in the Air

The True Story of a Serial Killer, the Great London Smog, and the Strangling of a City

Title
Death in the Air
Subtitle
The True Story of a Serial Killer, the Great London Smog, and the Strangling of a City
Author
Kate Winkler Dawson

Nicknames like a real "peasouper" or a "London Particular" make the quintessential foggy day in London Town sound so quaint — an impression that's been intensified in art and literature.

Certainly, the London of Sherlock Holmes would be a lot less mysterious without that obscuring fog. Impressionist painter Claude Monet, who famously depicted the Houses of Parliament shrouded in mist, said that: "Without the fog, London would not be a beautiful city. It is the fog that gives it its magnificent breadth."

Monet was talking about an added dimension to the city; but "breath," as in human breath, was precisely what the fog stole from London in the terrible winter of 1952.

For five days in December of that year, London was blanketed by a yellow toxic vapor that smothered its inhabitants. By the time this poisonous air mass moved on and death records were correctly tallied, some 12,000 people would be recognized as fatalities of what was called The Great Smog of 1952.

Journalist Kate Winkler Dawson has written an intriguing book about this silent disaster, which was borne out of a perfect storm of freak weather patterns and environmental ignorance.

The moist air of the Gulf Stream stalled for days over London that winter, long enough for there be a deadly build-up of soot, sulphur dioxide and other poisons emitted from the cheap sea coal (known as "nutty slack") that most Londoners used to heat their flats and houses.

The Great Smog also gave off a great stink: acrid and burning. In fact, on the cover of Dawson's book there's an arresting black and white photograph of a young woman, wearing a pearl choker and a tweedy-looking suit, with her chiffon scarf wrapped around her mouth like a face mask.

That photograph is, no doubt, meant to be suggestive of Dawson's other disturbing subject here. Death in the Air attempts to be a kind of a true crime book about two stranglers on the loose in London that winter. One an environmental killer (the smog); the other the infamous serial killer John Reginald Christie, who lured women to his Notting Hill flat and murdered them by suffocation. He's responsible for at least eight deaths.

Those parallel plotlines never quite intersect. Death in the Air would've been an even more compelling book without Dawson's somewhat forced attempt to make connections between these two London "stranglers."

Another strike against the Christie story is that his grisly career has been exhaustively documented in books and films. The Great Smog, however, was underreported when it happened, and is still not all that widely known; it seems an even more timely tale in our own age of extreme weather and environmental catastrophes.

Dawson cuts a precise narrative path through the smog by marshaling together an array of government and newspaper reports and interviews with people who lived through those terrible five days when trains, buses and ships on the Thames came to a standstill and crime was rampant.

Most affecting are the first-person recollections of a woman who was 13 years old that winter. Rosemary Sargent's working-class neighborhood had been bombed during the Blitz and she and her siblings had been separated from their beloved father for years during the war.

When the Great Smog began, Rosemary's father, his lungs already weakened by war work, started gasping for air. She and her mother stumbled to the doctor's office to get a nitroglycerin tablet; by the time they returned, Rosemary's father had died. He had to be laid out in the parlor of their small house for two weeks. As Dawson writes:

One of the most astonishing things about this deadly fog was who it first alarmed — not politicians, reporters, or even doctors, but undertakers. Across London, funeral directors reported a surge in bodies, so many that the demand for caskets was insatiable.

When the smog finally lifted, it took months — even years — for officials to realize that thousands of deaths attributed to heart disease or the flu were really caused by the toxic air.

In 1956, Britain passed the milestone Clean Air Act, which tightened restrictions on industrial smoke and banned coal in many houses and industries. Dawson says it was the first comprehensive legislation to attack air pollution. The number of "fog events" and deaths immediately dropped. The lessons for the present, Dawson suggests, are as clear as the air in front of our eyes.