Accessibility links
Fallen Soldier's Mother Says Trump Disrespected Her Son And Family The controversy began with a question about the president's lack of response to the deaths of U.S. soldiers in Niger. It took another turn on Wednesday with a dispute over his comments to a widow. 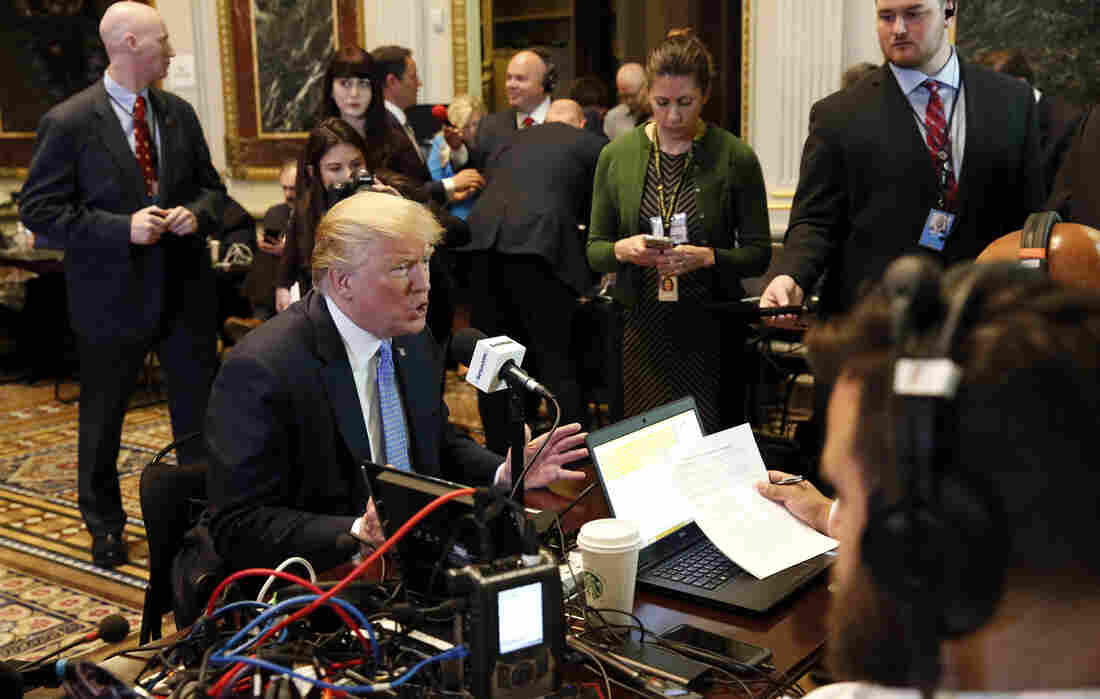 President Trump participates in a series of radio interviews in the Indian Treaty Room of the Eisenhower Executive Office Building on Tuesday. Among the topics he discussed was his and past presidents' policies on reaching out to families of service members who have died. Pool/Getty Images hide caption 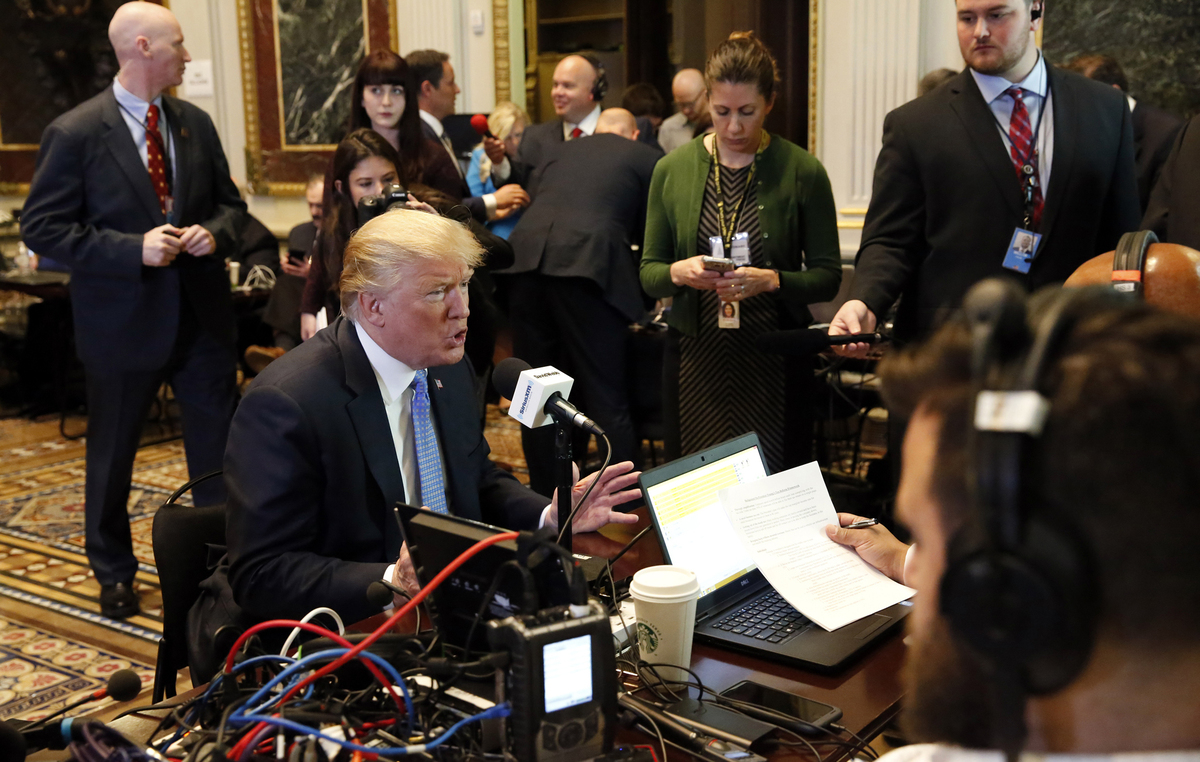 President Trump participates in a series of radio interviews in the Indian Treaty Room of the Eisenhower Executive Office Building on Tuesday. Among the topics he discussed was his and past presidents' policies on reaching out to families of service members who have died.

The pushback — and the outrage — began immediately.

Trump was asked on Monday why he had not yet commented on the deaths of four U.S. soldiers who were ambushed during a mission in Niger on Oct. 4. In his answer, Trump turned attention to the policies of past presidents and their contact with families of service members who have died.

On Tuesday, he followed his initial comments with more assertions, offering a specific example. That prompted further rebuttal from staff of previous administrations.

Trump On GOP Failures: 'I'm Not Going To Blame Myself, I'll Be Honest'

Meanwhile, a congresswoman said Trump told the widow of one of the soldiers killed in Niger that he "must have known what he signed up for."

Rep. Frederica Wilson, D-Fla., tells NBC6 that she overheard the call to Myeshia Johnson on Tuesday on a car speakerphone, as the two women were heading to Miami International Airport to meet the body of Johnson's husband, Sgt. La David Johnson.

In a tweet Wednesday morning, Trump denied he said that, calling Wilson's account "fabricated" and adding, "I have proof." Press secretary Sarah Sanders clarified that there was no recording of the call, but that there were several people in the room at the time, including retired Marine Gen. John Kelly, Trump's chief of staff.

Democrat Congresswoman totally fabricated what I said to the wife of a soldier who died in action (and I have proof). Sad!

Yet by midday Wednesday, the soldier's mother, Cowanda Jones-Johnson, had backed up the congresswoman's account. Jones-Johnson said she was also in the car listening to the call and told The Washington Post, "President Trump did disrespect my son and my daughter and also me and my husband."

At a Rose Garden news conference on Monday, a reporter had asked Trump: "Why haven't we heard anything from you so far about the soldiers that were killed in Niger? And what do you have to say about that?"

But as he continued, his response got less clear.

"They've been sent, or they're going out tonight, but they were written during the weekend," Trump said.

Then came a promise of more.

"I will, at some point during the period of time, call the parents and the families — because I have done that, traditionally," he added. He spoke of how making such phone calls is a "difficult thing."

Then came the moment that is vintage Trump. He turned it into an attack on his predecessors in office.

The facts simply don't support such a statement.

Trump's words prompted measured responses from the offices of the past two presidents.

A former Obama White House official told NPR on Monday, "President Trump's claim is wrong. President Obama engaged families of the fallen and wounded warriors throughout his presidency through calls, letters, visits to Section 60 at Arlington, visits to Walter Reed, visits to Dover, and regular meetings with Gold Star families at the White House and across the country."

On Tuesday, George W. Bush's spokesman wrote in an email, "I don't have a statement from President Bush; I can only confirm that of course he wrote, called, and visited privately with hundreds if not thousands of families of the fallen."

Stop the damn lying - you’re the President. I went to Dover AFB with 44 and saw him comfort the families of both the fallen military & DEA. pic.twitter.com/HhE4KbTBkJ

Twitter was also full of reaction from former Bush and Obama White House staffers, including photographs and emotional stories of meetings with soldiers' families at Walter Reed National Military Medical Center in Washington, D.C., and of the former commanders in chief being present for the arrival of the remains of soldiers at Dover Air Force Base in Delaware.

Many also used social media to share former President George W. Bush press secretary Dana Perino's past recollections of visiting troops and their families in the hospital — some were gravely wounded; some wouldn't survive their injuries. In April 2015, Perino shared that scene with NPR's Morning Edition:

"Most every family was just delighted that the president was there and so honored that the commander in chief would stop by. I wasn't sure what it would be like, and on my first trip there, I witnessed that for about the first 25 people he visited. And then we went in to this room, and the mom and dad were there and the mother was distraught.

"Her son was on life support, and from what I gathered and could tell, that his prognosis — that it was unlikely he would survive. And the mother was very distraught and she's crying and the husband was trying to calm her, and the president was there and he also tried to calm her. And then she yelled: 'Why are your children OK, but my son is here?' And the president stopped trying to comfort her because she was inconsolable.

"But he didn't leave. He stood there, almost as if he needed to absorb it and to understand it. Commanders in chief make really tough decisions, and we went on to the next rooms, and I remember those being experiences where the families were very happy to see him. But when we got on Marine One to fly back to the White House, the president was looking out the window, and then he looked at me and he said, 'That mama sure was mad at me.' And then he looked out the window and he said, 'And I don't blame her a bit.' And a tear rolled down his cheek, but he didn't wipe it away, and then we flew back to the White House."

On Tuesday, the White House remained on the attack on this issue, defending Trump's initial comments, but also including a specific example of his own chief of staff.

Kelly lost his son in Afghanistan in November 2010. Second Lt. Robert Michael Kelly was killed when he stepped on a land mine while on patrol with his platoon of Marines. He was posthumously promoted to first lieutenant.

"I said it very loud and clear yesterday. The hardest thing for me to do is [make those calls]," Trump said. "Now, as far as other representatives, I don't know. I mean, you could ask Gen. Kelly did he get a call from Obama?"

He added, "I'm not speaking for other people. I don't know what Bush did; I don't know what Obama did. You could find out easily what President Obama did. All you have to do is ask the military people, but I believe his policy was somewhat different than my policy. I can tell you my policy is I've called every one of them."

After the interview, a current White House official told NPR that Obama did not call Kelly after his son was killed in action.

In May 2011, the Obama White House did host a breakfast for Gold Star families, families who lost a loved one serving in the military. A source familiar with that breakfast confirms not only that Kelly attended but also that he and his wife were listed as being seated at a table with the first lady at that event.

"He offered condolences on behalf of a grateful nation and assured them their family's extraordinary sacrifice to the country will never be forgotten," the statement said.