Accessibility links
Ex-Green Beret And NFL Player On His Role In, Reaction To Anthem Protests When Nate Boyer saw Colin Kaepernick sit during the national anthem, he got mad, and wrote a letter that led to a discussion. Now as more athletes are kneeling, he has a new letter to all Americans. 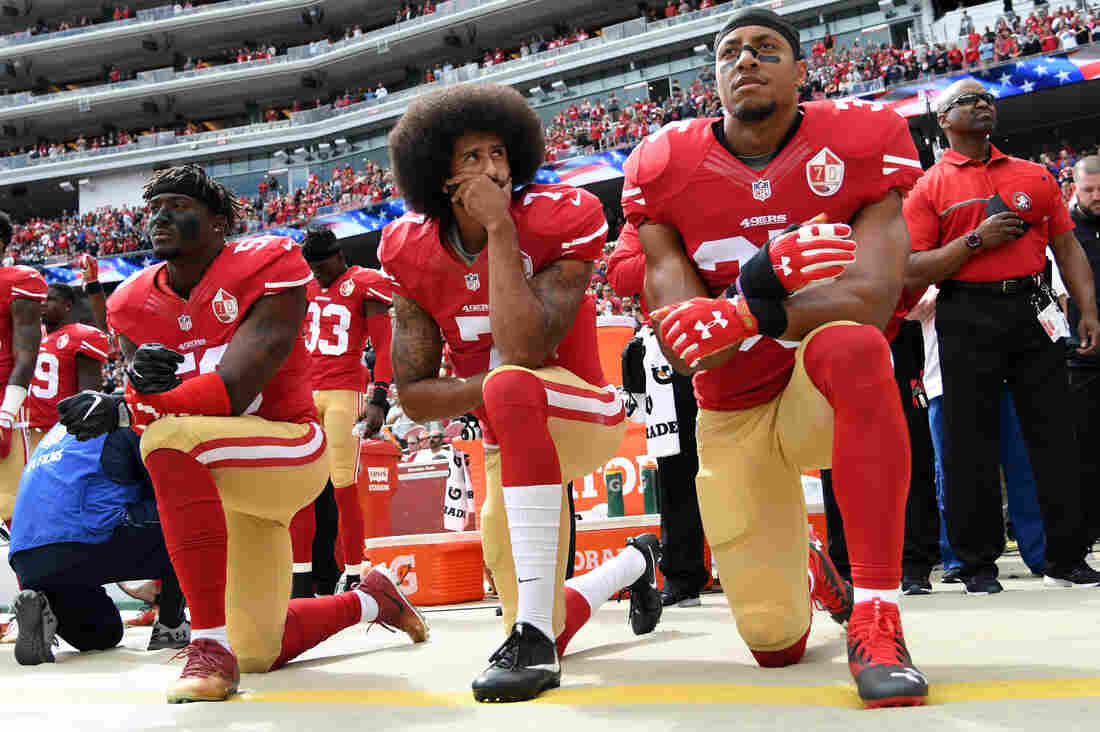 Former San Francisco 49ers quarterback Colin Kaepernick (middle) knelt on the sidelines during the national anthem to protest what he saw as the oppression of African-Americans in the United States. Thearon W. Henderson/Getty Images hide caption 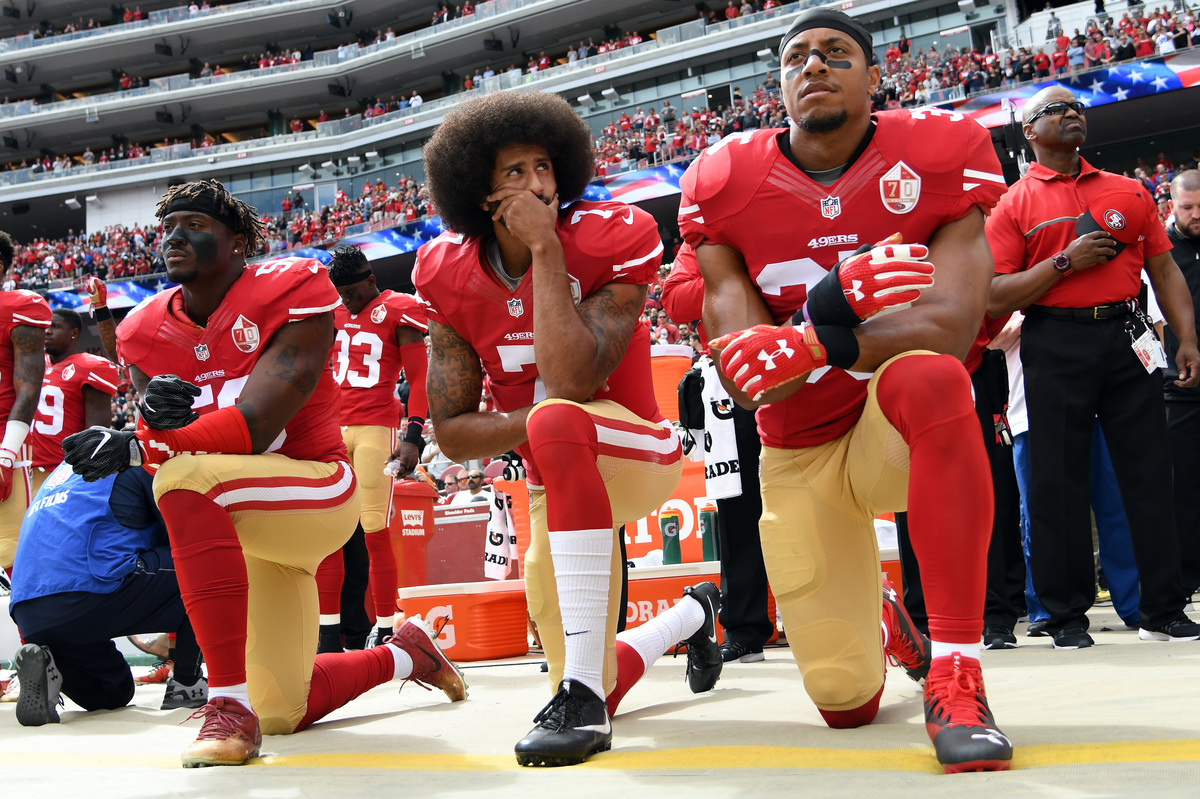 Former San Francisco 49ers quarterback Colin Kaepernick (middle) knelt on the sidelines during the national anthem to protest what he saw as the oppression of African-Americans in the United States.

Before Colin Kapernick took a knee, he actually took a seat.

Last year, when the former San Francisco 49ers quarterback wanted to draw attention to what he saw as the oppression of African-Americans — specifically by the police — he decided to sit during the national anthem.

And then Nate Boyer saw Kaepernick sitting and got mad.

Boyer is a former Green Beret who played football briefly with the Seattle Seahawks, and with the Longhorns at the University of Texas before that. After his initial anger of seeing Kaepernick sitting, he wrote the player a letter, saying he wished Kaepernick would stand up, but that he was willing hear him out about why he was sitting down.

That letter got a lot of attention, but also led to a discussion between Boyer and Kaepernick, which eventually led Kaepernick to kneel instead of sit. Now, as more NFL players have started to take a knee after comments made by President Trump, Boyer has penned a new letter. This time it's addressed to "Every Single American." It concludes:

So please, no more lines in the sand, not at home, not among our people. No more choosing sides, no more "for or against." I believe our Veterans will be called upon to lead the way in healing the world and solving its problems; right now our country needs that more than I can remember. So I'll be here, standing in the radical middle, doing what I can to continue fighting for those that can't fight for themselves. Let's get this thing fixed together, you and me. I love you all with all my heart.

Thanks for the invite brother... Good talk. Let's just keep moving forward. This is what America should be all about pic.twitter.com/LgjPpjk173

Boyer sat down to talk about this letter and the changes he's seen in the past year with All Things Considered host Kelly McEvers.

On his first letter to Kaepernick

It kind of spread like wildfire, and he ended up reaching out to me and wanted to sit down and sort of talk about things. ... It was right before the last preseason game last year in San Diego, in the team hotel. And we talked for a couple hours about everything.

So I urged him to stand and then take action, because that's really how change will happen, and he said, "No, I'm committed to sitting until I feel that things are changing and that we're moving in the right direction." And so through that conversation, I guess, we agreed on a middle ground of him taking a knee alongside his teammates.

On why kneeling was better than sitting

For me, that's a sign of reverence. You know, people take a knee to say a prayer. And then also, military personnel, it's very common to see an image of a soldier, or a marine, or an airman, or a sailor, take a knee in front of a fallen brother-in-arm's grave to pay respects. So I just thought it was better, and it showed more about — that he's paying attention as well, he's not, in a sense, sitting it out. He's engaged.

On the most recent 'Take A Knee' protests

I'm torn myself, because, for instance a couple of weeks ago, when so many more players were kneeling than previously and teams were staying in the locker room and every team was doing something different — and it was in the wake of President Trump's remarks about players kneeling.

Then it became — it seemed like it anyway — it became much more about "we're protesting what the President's saying," not the initial message that Colin was speaking up about....

Then we've got, outside the Ravens stadium last week, there was a huge demonstration where hundreds of people — at least — gathered together and they were all taking a knee during the anthem outside the stadium. And I look at that image and I think "Oh my gosh, what did I do?"

On the feedback he's gotten

I'm pointed at and looked to as the guy who told him to kneel. Like I called Colin and said, "Hey man, you should protest police brutality, why don't you take a knee?" Which is totally not even close to the truth....

On his letter to "Every Single American"

I'm at this point, and I think a lot of us are in our country, where we're just so sick of all that hate and the not listening to one another. The irony in this is I wrote it, it's posted out there on the Internet and in social media and everything — but I think that's the biggest problem. ... We're so fixated on that stuff we don't — like you and I are doing, right? — we don't have these conversations.

That's where this letter came from — just trying to bring us together and trying to let people understand that I'm probably feeling the way that most of us are right now. We just want to heal and move past all this division and hate and anger.