Accessibility links
'A Line In The Dark' Is A Fresh Approach To The Teen Thriller Malinda Lo's new book sets up a classic conflict — townie kids versus prep schoolers — and adds nuanced queer characters. Despite a flawed second half, A Line in the Dark has much to offer. 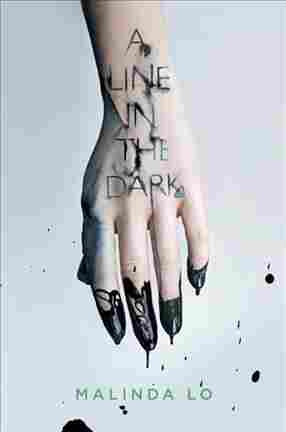 A Line in the Dark

Title
A Line in the Dark
Author
Malinda Lo

Jess and Angie are best friends. From the outside, they're everything best friends should be. Jess hangs out at the ice cream parlor where Angie works, and Angie reads every new page of Jess's graphic novel about a girl who fights evil mutants with the help of her reliable best friend. Neither of them talks about the fact that Jess is in love with Angie. It's a truth they won't even admit to themselves.

Maybe it could have gone on like that forever, if it weren't for the Peeb girls. That's the nickname the public school kids have for students at Pearson Brooke, their town's fancy boarding school. When Margot and Ryan waltz into the ice cream parlor like they own it, Jess feels her world shift.

All of a sudden, Angie and Margot are dating. Jess has an inside view of the goings-on at Pearson-Brooke, since she has a place in their art exchange program. She begins to learn more about Margot and Ryan, things that Angie can't see. Angie won't admit that Margot is a mean girl who ruins lives, or that Margot's already destroying everything Jess cares about.

Then one night at a party, it all comes to a head. Soon the police are investigating a terrible crime, and only the girls know the truth of what really happened. They have to decide what's worth protecting and what needs to come out into the open.

Malinda Lo has made a career of examining various genre subsets of YA literature through a queer lens. From fairytale retelling to high fantasy to science fiction, she brings a fresh perspective to teen romance in any setting. A Line in the Dark sets out to do the same for the YA thriller sub-genre. It's a good fit; the awakening of teen sexuality often makes for secrets and burning desires that remain unspoken.

Zine And Heard: In 'Moxie,' A Young Woman Fights Back

That, plus Lo's keen ability to capture character and build tension, make the first part of the book (it's divided into Parts 1 and 2) a riveting read. The story is revealed through Jess, and the pain of her repressed feelings is palpable. She is filled to capacity with hopeless longing and the desperate desire to keep things frozen into place and avoid facing the truth that change will force upon her. Hers is a suffering that readers can relate to.

The stakes grow ever higher, and it's easy to be frightened for Jess. Her pain is so sympathetic and her personality is so charmingly geeky, it's all too clear to us that she has a lot to lose. As the situation — and her feelings — spin more and more wildly out of control, the sense that something terrible must happen becomes overwhelming.

Unfortunately, at this critical point, A Line in the Dark flounders. Once the crime has taken place, the point of view shifts. We go from Jess's perspective to a mix of police transcripts and third person narration that never lets us get close to any of the characters. This keeps the mystery a mystery, even though Jess and the other girls have all the answers. We readers only find out what really happens in the epilogue.

I can understand the allure of avoiding spoilers — but by shutting us out of Jess's mind, Lo shuts us out of her emotions. Where once we felt her pain, we suddenly feel as though we don't know her at all. Suddenly I found myself identifying with her frustrated parents, who have no idea what their daughter is really going through. Ultimately, the mystery of the crime just can't compete with my earlier interest in the unfolding of Jess's inner world.

That being said, A Line in the Dark has a lot to offer. The story of tensions, romances and even violence between townies and prep school kids is well-trodden ground, but Lo makes it new and exciting by creating nuanced queer characters and giving them the chance to make their own terrible decisions.

An earlier version of this review spelled one character's name as Margo. It is Margot, with a t.