Accessibility links
Attorney General Jeff Sessions Grilled By Senators On Russia, Comey, 'Sanctuary Cities' The attorney general testified before the Senate Judiciary Committee on Wednesday and defended his past comments to the panel about his contacts with the Russian ambassador during the 2016 campaign. 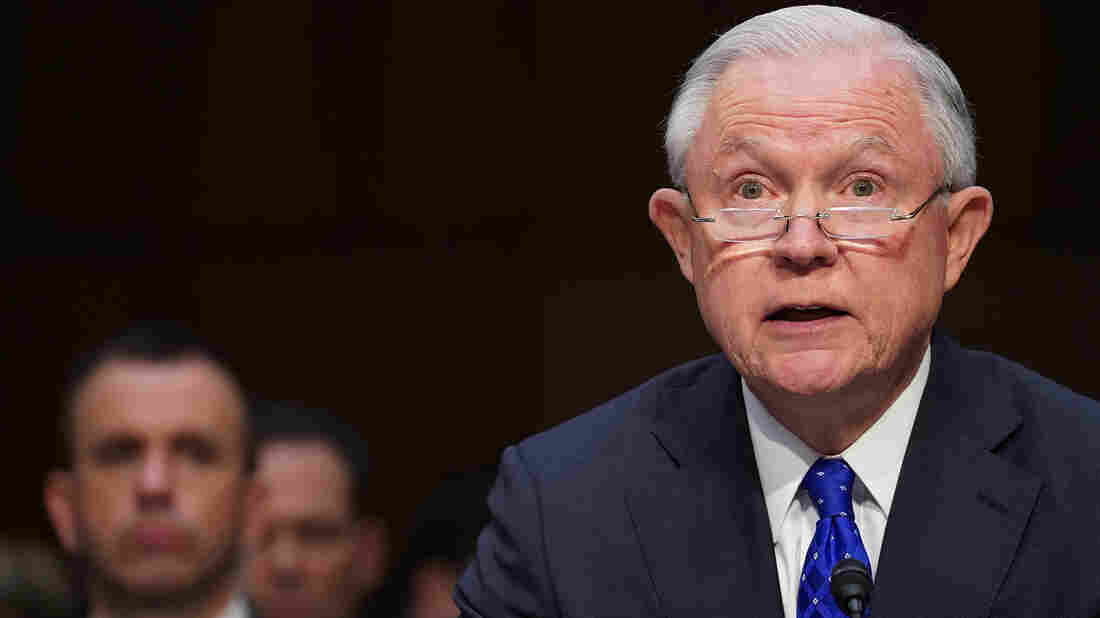 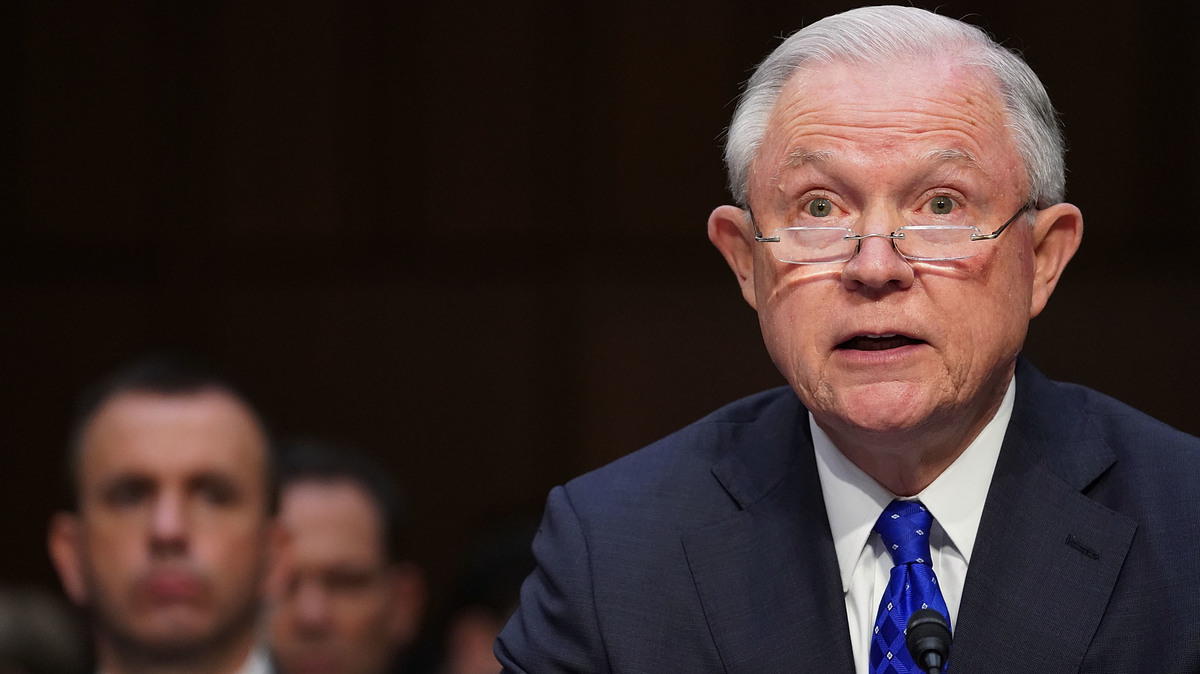 In his opening statement before the Senate Judiciary Committee, Attorney General Jeff Sessions rebuffed the panel's Democrats on the issue of executive privilege.

Attorney General Jeff Sessions defended his prior testimony about his contacts with Russia's ambassador during last year's presidential campaign during an at-times contentious appearance before the Senate Judiciary Committee on Wednesday. Sessions also said he has not been questioned by special counsel Robert Mueller's office, which is looking into Russian interference during the presidential race.

Sessions tangled with Democratic senators over his testimony during his confirmation hearing in January, when he told panel members that he "had no communications" with Russian officials during the campaign.

In March, The Washington Post reported that Sessions had met with then-Russian Ambassador Sergey Kislyak twice during the campaign. Sessions then recused himself from the probe into Russian interference in the election after the meetings were revealed.

Sessions said Wednesday that he did not recall any discussions about the Trump campaign during his meetings with Kislyak but that he may have talked about some of then-candidate Donald Trump's positions.

He denied meeting with any Russian officials to discuss coordination between the campaign and Russia.

Sen. Al Franken, D-Minn., accused Sessions of "moving the goalposts" in his testimony — "morphing," Franken said, from first denying any contact whatsoever with Russia to saying there had been no discussion of the political campaign and now to saying there was no discussion of any interference in the election. "That to me is moving the goalposts every time, and at the end, we're going to need a 75-yard field goal," Franken said.

'An Appalling And Detestable Lie': 5 Highlights From Sessions' Senate Testimony

Sessions said Franken was being unfair to him. In a later exchange with Sen. Patrick Leahy, the Vermont Democrat accused Sessions of being part of a "Russian facade." Sessions said he was hurt by that remark, adding, "I'm not part of a facade."

Another line of questioning from Democrats was into President Trump's firing of former FBI Director James Comey. Under questioning from the panel's ranking Democrat, Sen. Dianne Feinstein of California, Sessions said he doesn't think "it's been fully understood the significance of the error" Comey made in the investigation of Democratic presidential candidate Hillary Clinton's emails.

Feinstein asked Sessions about his role in the firing of Comey in May. Sessions indicated he supported the decision, criticizing Comey's conduct. Sessions said he had "never heard of an investigator" declaring the closing of an investigation as Comey did with the probe into Clinton's use of a private email server while she was secretary of state during the Obama administration.

Sessions said he was particularly concerned that Comey said he would do it again. Sessions said there was a need for "a fresh start" at the FBI but said his discussions with President Trump on the matter were confidential.

Sessions was also asked about the Justice Department's withholding of federal law enforcement grants to some states because of so-called sanctuary city policies, under which local police have refused to turn over suspects being held for other crimes to Immigration and Customs Enforcement for deportation.

Sen. Dick Durbin, D-Ill., cited the high number of killings in Chicago. "Undocumented immigrants are not driving crime in Chicago," Durbin said, adding, "You're not helping us solve this murder problem by taking away these funds."

Sessions responded that he is "worried about the health and morale of the Chicago police department," adding that "politicians cannot say that if you remove a violent criminal from America that's illegally in the country and is arrested by the Chicago police and put in the Chicago jail that once they are released they shouldn't be turned over to ICE officers to be removed from the country."

Sen. John Kennedy, R-La., also expressed concern that law enforcement grants to his state were being reduced because of policies in New Orleans.

In his opening statement, Sessions rebuffed the panel's Democrats on the issue of executive privilege. Last week, all nine of the committee's Democrats had written the attorney general regarding potential assertions of executive privilege during Wednesday's hearing. "We expect that ... you will have determined whether the president will invoke executive privilege as to specific topics and will be prepared to answer completely all questions in those areas on which he has not," the Democratic senators said in their letter. Sessions had refused to answer questions relating to the Russia probe in June testimony before the same committee, saying it was inappropriate.

On Wednesday, Sessions told the panel that he "will not be able to discuss the contents of my conversations with the president" and essentially returned to that rationale several times during the hearing when questions touched on discussions with Trump.

In defending his reliance on the executive privilege in order to not breach the confidentiality of discussions with the president, he later added that the executive branch is a co-equal branch and told senators that "you would not want someone demanding to know who you talk to in your office" and, likewise, Supreme Court justices' would not someone inquiring into the details of their discussions with their law clerks.

Sessions also addressed concerns of Sen. Mike Lee, R-Utah, about the government's asset forfeiture program, under which federal agents can seize private property, even if the property's owner has not been accused of a crime. Sessions told Lee that he was aware of the concerns about the program, saying he had merely restored it to its status prior to former Attorney General Eric Holder's move to limit its scope.

He said the Justice Department's newly announced director of asset forfeiture accountability will review the policy, and "review any complaints that arise."