Accessibility links
Draft Of Health Care Bill Addresses Trump Concerns About 'Bailouts' For Insurers A draft of the bipartisan legislation obtained by NPR would restore subsidies to insurance companies to assist low-income consumers and require them to go to consumers as rebates. 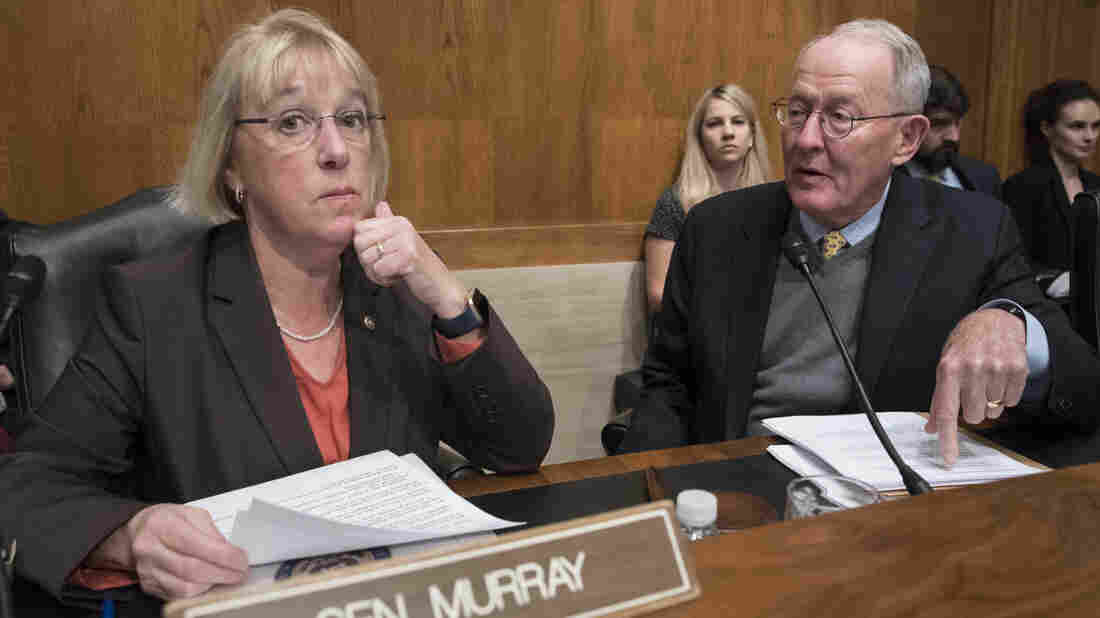 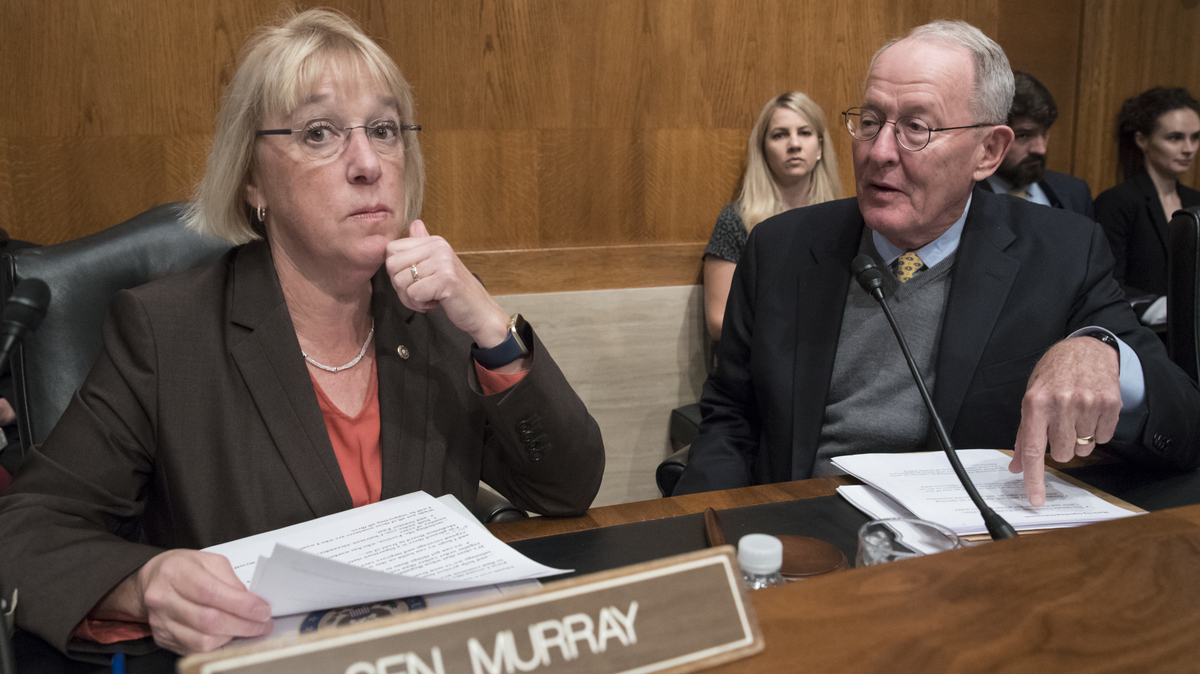 Sen. Patty Murray, D-Wash., and Sen. Lamar Alexander, R-Tenn., leaders of the Senate Health, Education, Labor, and Pensions Committee, meet before the start of a hearing on Capitol Hill.

A proposal in the Senate to help stabilize Affordable Care Act marketplaces would ensure that subsidies paid to insurance companies benefit consumers rather than padding the companies' profits.

A draft of the bill, obtained by NPR, requires health plans to offer the subsidies as one-time or monthly rebates to consumers or they will be repaid to the federal government. The subsidies, known as cost-sharing reduction payments, are designed to reimburse insurance companies for discounts they are required to offer their customers on copayments and deductibles. President Trump has criticized the payments as a "bailout" and said last week he would cut them off.

The bipartisan bill, proposed by Sens. Lamar Alexander, R-Tenn., and Patty Murray, D-Wash., restores the payments for the rest of this year and the next two years. But the lawmakers are seeking to reassure the president that the payments will benefit consumers and not insurance companies.

He had tweeted such concerns earlier on Wednesday.

Alexander tells NPR's Susan Davis that he has spoken to the president three times in the past 12 days, including Wednesday morning before the president's tweet. He also reiterated that the effort to repeal and replace the Affordable Care Act would not end because of this bill.

"We would like to replace Obamacare, that's almost unanimous in the Republican caucus. But I think it will become increasingly unanimous in the Republican caucus that we understand that between today and the time we can replace Obamacare is two to three years," Alexander told NPR. "And that if we do nothing we'll create chaos, and chaos will lead to a birthday present for Bernie Sanders, which is a single-payer solution — which none of us want."

Murray and Alexander are expected to officially release the bill with a list of bipartisan co-sponsors on Thursday. Republicans are working a number of influential senators from the moderate and conservative wings to sign on so the bill can pass the Senate.

Republican Senate leaders have indicated they will not waste limited floor time on another failed health care bill, which means the bill must be ensured 60 votes to pass.

Senate Minority Leader Chuck Schumer, D-N.Y., criticized the president at length for tempering his initial support for the deal. "This president keeps zigging and zagging so it's impossible to govern," Schumer said on the Senate floor Wednesday morning. "He's totally inconsistent. For it one day, against it the next day. You can't govern — Mr. President, you cannot govern a country, you cannot keep America great, if you don't know what's in the bills and you don't have a consistent policy about them."

Schumer said he'd had private conversations with the president in recent weeks in which they both agreed to encourage their respective senators to reach a deal.

The bill also allows states to seek waivers to create variations on the Affordable Care Act in their own states. That's been a priority of Republican lawmakers, who argue that state-level legislators and governors better understand the needs of their citizens.

"This will give states meaningful flexibility," Alexander said Tuesday in discussing the forthcoming bill.

The ACA allows states to apply for waivers to set up systems such as reinsurance programs that protect insurance companies from large and unexpected losses, or high-risk pools to provide coverage to the sickest patients.

But many of the state applications have been delayed or denied because of all the requirements laid out in the law.

For example, the ACA requires state legislatures to pass a law approving the waiver provisions. The new proposal would simply allow a state governor to sign off on the plan.

The bill also restores some of the federal budget for advertising and outreach for open enrollment in ACA health plans, which starts on Nov. 1. The Trump administration slashed that budget by 90 percent.

Alexander says he will seek Senate co-sponsors for the bill and then bring it to Majority Leader Mitch McConnell later this week for consideration.

Full text of the bill and a summary are below.